Copyright © 2021 Jipeng Xie, et al. This is an open access article distributed under the Creative Commons Attribution License, which permits unrestricted use, distribution, and reproduction in any medium, provided the original work is properly cited.

The proportion of electric vehicles in vehicle manufacturing is increasing, but with the endurance mileage of the battery improved, the collision safety problem of electric vehicles is becoming more prominent. To solve a multi-objective robust design problem with discrete variables for vehicle collision design, we propose the Grey-Taguchi robust optimization method. The Grey-Taguchi method transforms the multi-objective functions into a single grey relation grade sequence instead of the signal-noises ratio used in Taguchi and selects the optimal combination of design variables predicted by the minimum design of experimental and the analysis of means. For the vehicle crashworthiness problem, the Grey-Taguchi method can converge to the Pareto front with several iterations. The mass of frame, maximum lateral intrusion, and peak deceleration after the optimization are decreased 14.5 %, 32.3 %, and 17.8 %, respectively. The Grey-Taguchi robust optimization method can not only enhance the robustness of the optimization design but also improve the lightweight design performance and crashworthiness. The proposed method is considered promising for complex engineering design problems with multi-objectives and discrete design variables. 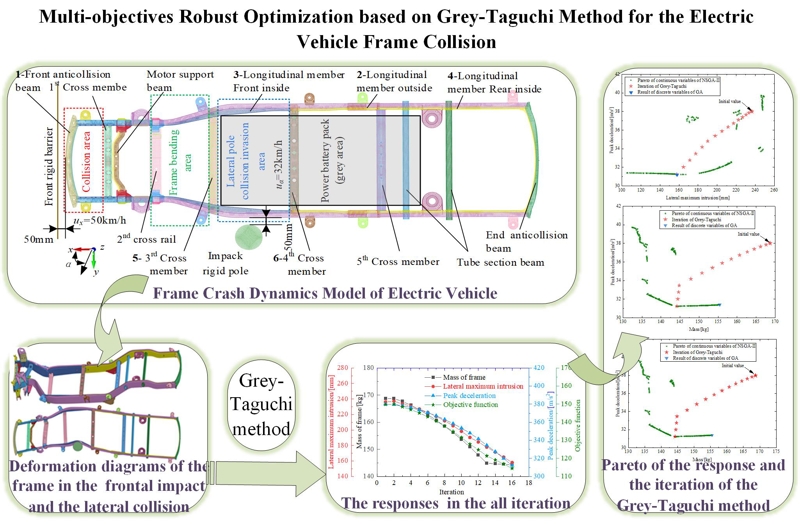 Passive safety technology is still concerned by scholars and engineers, especially the crashworthiness and lightweight design of electric vehicles [1].

In addition, these design variables are also uncertain and the discrete parameters exist in the products. Therefore, vehicle collision design is a multi-objective robust design problem with discrete variables, and there are few reports on this kind of problem [4].

Taguchi method is a robust optimization design that implemented the signal-to-noise ratio (SNR) and orthogonal table to optimization. To complete the experimental design, parameters must be discretized. Therefore, the robust design method of Taguchi provides the possibility to solve the above problems. But the Taguchi method has its own problems. To eliminate the shortcomings of the Taguchi, the grey relation analysis (GRA) is utilized herein to convert multiple objectives to a single grey relation grade (GRG) sequence by the linear weighted sum method. In recent years, the implementation of GRA for robust design has received attention [5]. Sun et al. [3] and Xie et al. [6] further extended the Grey-Taguchi method to the multi-objective robust optimization design.

However, with the increase of the number of control variables and discrete levels, the experiment was designed so many times that it could not be done.

The purpose of this paper is to use the Grey-Taguchi robust optimization design method that found and iterated the optimal combination with the minimum experimental design table in order to solve the multi-objective robust optimization problem for an electric vehicle collision with discrete variables.

2. Problem description for the frame collision

2.1. The simulation model of the frame collision

The collision finite element model for the frame was established by the software of HyperWorks/LS-DYNA, and the shell element size is 10 mm. There are 79,537 elements and 84,89 nodes of the frame.

For the collision of electric vehicles, we should not only consider the safety of occupants in the collision process but also consider that the power battery pack is not invaded by objects. Therefore, we simulate the two working conditions of a frontal collision and lateral collision. The rigid barrier is set at the front of the frame and the lateral pole is shown on the left side of the frame in Fig. 1, the simulation parameters are listed in Table 1.

2.2. Definition of the optimization problem for the frame collision

When car crashing occurs, the impact severity of the vehicle can be characterized by the peak deceleration to protect the safety of occupants. However, the peak deceleration decreases with the increase of absorbed energy, and could always lead to an unfavorable increase in frame mass. Besides, the maximum lateral intrusion may damage the integrity of the battery compartment, the battery will be pierced and burned.

Thus, minimization of the mass of frame , lateral maximum intrusion and the peak deceleration were chosen as the three objectives for the vehicle crashworthiness design.

Six wall thicknesses were chosen as the design variables herein, and these thicknesses are discrete values in actual products, as shown in Table 2.

Therefore, the optimization problem can be formulated mathematically as:

where was the vector of design variables with the discrete candidate values of (mm).

The flowchart of implementing the proposed Grey-Taguchi method is illustrated in Fig. 2. The detailed steps of the method are depicted as follows:

Step 2: The procedural details of a Taguchi parameter design can be summarized as follows:

(1) Determine the control factors (the design variables such as the thickness of the members) and noise factors. In this paper, the noise factor is the elasticity modulus of the material.

(2) Construct an experimental design table, where the control factors and the noise factors that are sampled through an orthogonal design are arranged in a form of inner and outer tables, respectively. In this paper, there are only 3 levels for the control factors, the initial values or the optimal value of previous cycle assigned to the second layer. The smaller discrete values and the larger discrete values were set as the first and third levels at an interval of 0.1. The minimum orthogonal array L27(36) was adopted for the inner table. The noise factors have two levels: the normal and the lowest limit of the elastic modulus of the material. The noise factors were set in an external array.

where (the components of ) are normalized value; is the design candidate, , , are the numbers of the response function.

Fig. 2. The flowchart of the proposed Grey-Taguchi method

Step 4: Calculate the GRG by the GRA method.

First, the grey relational coefficient (GRC) can be determined as Eq. (3):

where is the reference sequence that is the ideal normalized for the th performance characteristic. is the identification or distinguishing coefficient (0 1), which is typically taken as 0.5. For our study, the value of was also set to be 0.5. and , is the number of quality characteristics.

where is the weight coefficient. The weight of frame mass, maximum lateral intrusion, and maximum acceleration were 0.4, 0.3, and 0.3 respectively.

The frontal collision test for the whole vehicle was tested in the safety laboratory of the National Automobile Quality Supervision and Inspection Center (Xiangyang) on May 9, 2016.

The collision deformation diagrams of the frame with the equivalent mass in the frontal collision and the lateral pole collision are shown in Fig. 3(a) and Fig. 3(b), respectively.

In this paper, the Grey-Taguchi method was used for the robust multi-optimization design of the frame crashworthiness with the discrete variables in the frame collision model.

Fig. 4. The responses and GRG in the all iteration

Fig. 5 shows that both the Grey-Taguchi method and the multi-objective discrete optimization without considering fluctuations can converge to the Pareto frontier, but their optimal solutions are different. The multi-objective discrete optimization has the better lateral maximum intrusion and peak deceleration, but it does not achieve a lightweight design.

Fig. 5. Pareto of the mass of frame, maximum lateral intrusion and peak deceleration, and the iteration of the Grey-Taguchi method 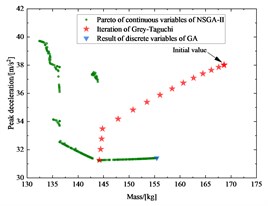 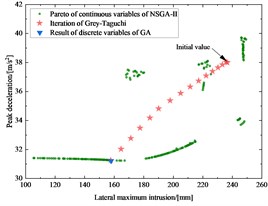 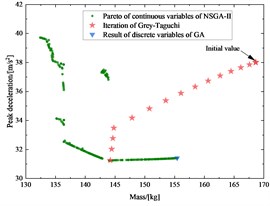 In this paper, a robust frame crashworthiness problem with multiple objectives and discrete design variables was designed using the Grey-Taguchi method, based on validated frame frontal and side-impact dynamics models.

For the vehicle crashworthiness problem, the Grey-Taguchi method can converge to the Pareto front with several iterations. The mass of frame, maximum lateral intrusion, and peak deceleration after the optimization were decreased by 14.5 %, 32.3 %, and 17.8 %, respectively.

The Gray-Taguchi method can not only enhance the robustness of the optimization design but also improve the lightweight design performance and crashworthiness.