Copyright © 2021 Kangjia Du, et al. This is an open access article distributed under the Creative Commons Attribution License, which permits unrestricted use, distribution, and reproduction in any medium, provided the original work is properly cited. 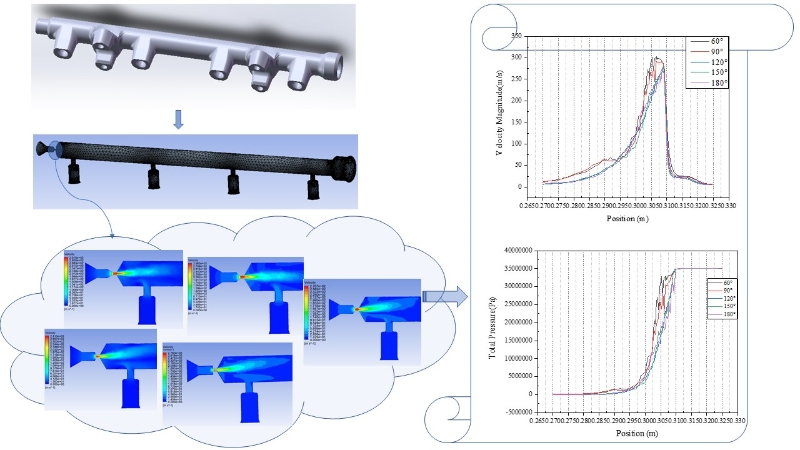 In this paper, ANSYS Workbench software is used to simulate and analyze the performance of common rail products for four cylinder gasoline engine manufactured by a fuel distributor manufacturing company. The damping hole at the high pressure oil inlet end and the nozzle structure formed at both ends are analyzed, which provides a basis for the optimization and improvement of structure.

In this paper, the flow problem of unsteady viscous fluid is considered. The fluid domain is in high pressure environment, and the flow field at the nozzle structure is in high turbulence state, so the turbulence model should be selected as the calculation model. Ignoring the problem of heat exchange on the fluid solid wall, in other word, ignoring the influence of temperature.

where, is the oil density, is the quality source term.

where, is static pressure, is the stress tensor, , is the gravity volume force and external volume force in the direction respectively.

In terms of structure, the common rail pipe mainly includes the damping hole connecting the high-pressure oil pump end, the throttle hole connecting the fuel injector end, as well as the rail pressure sensor, pressure safety valve and flow limiting valve [8]. The physical model of the common rail pipe is shown in Fig. 1. Import the model into the workbench software, and use the channel extraction function of the software to extract the fuel fluid domain of the internal oil passage. When meshing, according to the structural characteristics of each part and the needs of calculation results, the element segmentation should be small and dense at the parts with large changes in section and curvature and the head deformation of common rail and common rail branches. For the parts with small changes in section and curvature as well as less important research objects (such as common rail pipe wall, common rail end, etc.), the element segmentation is relatively coarse. In this way, it can not only ensure the calculation accuracy requirements of key parts, but also reduce the calculation time [9].

Fig. 4 shows that there is a phenomenon of partial oil backflow, and there is an obvious vortex formation at the tail of the nozzle structure. The vortex will change the direction of the flow rate of the fuel. In the vortex area, the fluid rotates, collides and backflows irregularly, which will cause great obstacles to the mainstream movement, consume the energy of the mainstream movement and produce flow pulsation, pressure loss. In the common rail tube cavity, the fluid has relatively enough space due to the relatively large volume. So that the fluid velocity and pressure can be fully developed, and then the distribution of fluid velocity and pressure in the common rail tube cavity is relatively uniform. In Fig. 3, there are unreasonable negative pressure values, which may be related to the grid division and initialization conditions, but because they are individual extreme values, they have little impact on the overall law analysis, so they can be ignored. Drastic changes mainly occur in the nozzle structure. If the structure here can be more reasonable, the pressure of the fluid entering the cavity can be quickly stabilized, which will improve the responsiveness of the whole common rail system, the working stability of the fuel injector and the smoothness of engine operation. There are three types of commonly used nozzles: cylindrical, conical, cone straight type [10]. The conical nozzle is difficult in the machining process, so I choose the cylindrical and cone straight type structure for comparative simulation analysis. The model used above is the cone straight type nozzle structure, and the cylindrical nozzle is equivalent to the cone straight type nozzle with a cone angle of 180°. 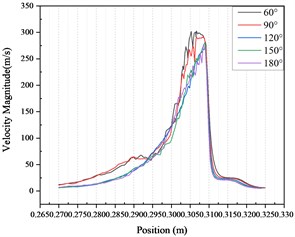 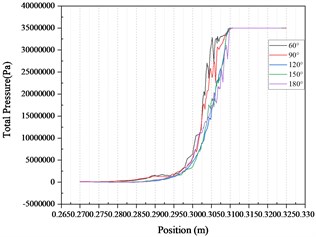 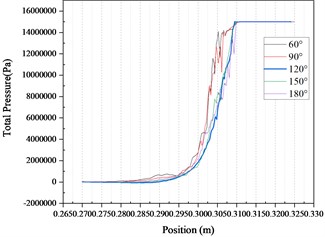 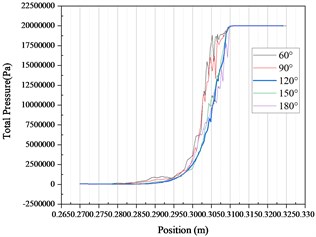 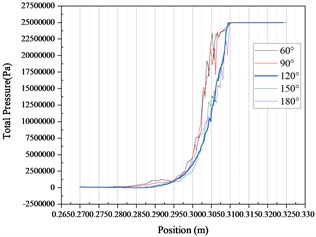 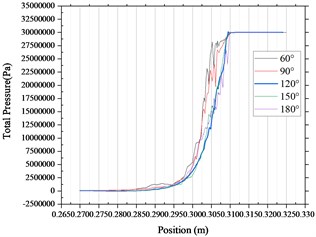 The flow of fuel in the common rail is a complex turbulent flow problem, which is a nonlinear fluid movement with irregular space and disordered time. Therefore, it is difficult to obtain the velocity and pressure distribution of fuel in the common rail pipe in the experiment. Using three-dimensional modeling combined with fluid software numerical simulation can fully simulate the fluid characteristics and obtain the velocity and pressure distribution that can better meet the actual conditions. By comparing some commonly used taper hole processing angles, it is analyzed that when the cone angle at the nozzle structure is 120°, the change of speed and pressure of the common rail pipe is gentler and the fluctuation range is small compared with other cone angles. Under the 120° cone angle, the pressure stabilization performance obstacle of the common rail pipe is small, the pressure will be stable faster, and the response performance is relatively best. Therefore, the 120° processing angle would be preferred when processing the cone angle.