Copyright © 2021 Zhuwen Ma, et al. This is an open access article distributed under the Creative Commons Attribution License, which permits unrestricted use, distribution, and reproduction in any medium, provided the original work is properly cited.

It is well known improper disposal of tobacco stalks as waste can cause great pollution to farmland and the environment. In this paper, tobacco-stalk-core-based activated carbon was successfully synthesized by pre-carbonization and ZnCl2 activation. The influences of different activator ratios on the microstructure and the electrochemical performance of the activated carbon were systematically investigated. The results showed that while the ratio of the activator to the precursor of carbon was 2:1, the specific capacitance was high to 342.0 F·g-1 at 1 A·g-1 current density. To sum up, an as-prepared carbon material with high capacitance could be obtained by tobacco stalks core. ZnCl2 is an effective activator for the reuse of tobacco stalk, and it provides a new way of technology for synthesizing tobacco waste recycling resources.

In recent years, a growing number of researchers have explored the conversion of biomass/biomass waste into products with high added value [1]. According to statistics, there are many tobacco wastes every year in China, of which is about 1.20×106 tons, as the world's largest producer of tobacco [2]. Tobacco stalk waste is mostly burned, buried or discarded, which not only is the farmland damaged greatly, but also is the environment polluted seriously [3]. Consequently, the reuse of tobacco stalk waste as an environmentally friendly, easily available, low-cost and renewable carbon precursor will help curb pollution and increase its economic value.

At present, the precursors of activated carbon in the market are mainly coal, coke and biomass. Among these precursors, biomass is considered a kind of green energy because of its high efficiency and renewable, which has attracted extensive attention in electrode materials. So far, a variety of biomass resources, such as coffee grounds [4], cotton stalk [5], rice husk [6], have been used to synthesize electrode materials for supercapacitors.

Chemical activation is used in this work on the one hand based on a large number of previous studies, on the other hand because this method is simple, low cost, conducive to industrial production. Among all activators, ZnCl2 and KOH are the most widely used activators for the production of activated carbon. According to the research of ZnCl2 and KOH are used to produce activated carbon from wheat straw, it is found that, unlike KOH, ZnCl2 is distributed uniformly through precursor, thus preventing excessive activation [9]. Therefore, ZnCl2 can be used as an activator to control pore production better.

In this work, activated carbon was prepared by tobacco stalk biological waste and ZnCl2 as an effective activator with high added value. The obtained activated carbon material owned high specific capacitance, accompanied by good conductivity, which would be a promising electrode material for supercapacitors. The high performance was introduced by a high specific surface area, which could also enhance the properties of high adsorption capacity and fast adsorption speed. So this kind of activated carbon materials could be widely used in air purification, sewage purification, toxic substance adsorption and other production fields. Above all, recourses reusing tobacco stalk waste not only improves its own economic value, but also provides a new solution for other agricultural waste resource treatment.

The tobacco stalk core was originated from local tobacco production base, and used as the precursor. All of the reagents used for the preparation of carbon samples were analytical grades.

The activated carbon was prepared via a chemical activation method with tobacco stalk core as a carbon source and ZnCl2 as a chemical activation agent. In a typical synthesis process, tobacco straw core powder was pyrolyzed in tubular furnace at 550 ℃ for 2 h under N2 atmosphere. Then the obtained bio-chars were mixed with various ZnCl2 (ZnCl2 to precursor weight ratios of 1:1, 2:1 and 3:1). The homogenous composites of biochar and activator were placed onto a Nickel crucible and then transferred into a tubular furnace at 800 ℃ for 2 h under N2 atmosphere at a heating rate of 5 ℃·min-1. Finally, the as-prepared activated carbon was washed with 1 M HCl and then deionized water several times until reaching a neutral pH to ensure the complete removal of metallic Zinc, unreacted materials and inorganic salts. The tobacco stalk core starting material was labeled as “TSC”, and the resultant tobacco stalk core derived carbons have been denoted as “TSCAC-x”, in where the “” represents ZnCl2 to precursor weight ratio. To prove the effect of activator, an activated carbon material was synthesized under the same conditions without using any activation agents, which was denoted as TSCAC. The activation conditions of each sample are shown in Table 1.

The working electrode was fabricated by mixing the active material, polytetrafluoroethylene (PTFE), and acetylene black with a weight ratio of 80:10:10 dispersed in ethanol. Subsequently, the slurry was coated onto nickel foam (effective coating area is 1×1 cm2), and then vacuum dried at 80°C overnight. Subsequently, the electrodes were pressed under 10 MPa. Cyclic voltammetry (CV) and galvanostatic charge-discharge (GCD) analysis were run within the operation applied potential window ranges of –1.0 to 0.0 V. The electrochemical impedance spectroscopy (EIS) data is carried out within the frequency of 500 kHz to 0.01 Hz. The specific capacitances (Cs, F·g-1) were measured from the GCD curves applying equation.

Scanning Electron Microscope images of the TSCACs material were presented in Fig. 1. The original biochar (TSCAC) was underdeveloped with a smooth and flat surface (Fig. 1(a)). Compared with TSCAC, the surface of other TSCACs material became very rough, and the pore structure was significantly improved (Fig. 1(b), (c), (d)) after activation by ZnCl2. The morphology of TSCACs largely depends on the amount of ZnCl2. As shown in Fig. 1(b), there are only a few shallow cracks and some incomplete pores on the surface of the TSCAC-1 sample, when the mass ratio of ZnCl2 to carbon precursor was 1:1. The surface roughness of the TSCAC-2 sample is greatly increased, and it has a relatively complete and continuous porous structure (as shown in Fig. 1(c)), which is conducive to electrolyte penetration and continuous electrochemical applications. However, the porous structure of TSCAC-3 began to collapse and surface agglomeration and fragmentation appeared (Fig. 1(d)), when the mass ratio increased to 3:1. The damage of porous structure may be caused by excessive corrosion of ZnCl2. These results show that a proper zinc oxide activation concentration is beneficial to the formation of a complete and continuous porous structure. The continuous and complete porous structure can increase the effective ion contact area, while also allowing the electrolyte to penetrate through the surface until they reach the inside of the biochar electrode, which is beneficial to the electrochemical energy storage reaction [10]. 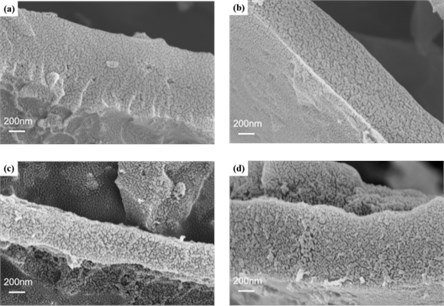 Fig. 2 shows the XRD patterns of TSCAC and TSCAC-2. It can be observed that two broad peaks locked at around 23.5° and 44.6°, which can be indexed to the (002) and (100) lattice planes of the disordered and graphitic carbon, respectively [11]. This indicates that the disordered structure in the amorphous carbon layer is caused by the randomly oriented hexagonal carbon layer, which is beneficial to the increase of the surface area. This finding indicates that the ZnCl2 activation process promotes a certain degree of graphitization, and confirms that TSCAC was successfully transformed into amorphous carbon and part of graphitic carbon through the activation and carbonization process [12]. 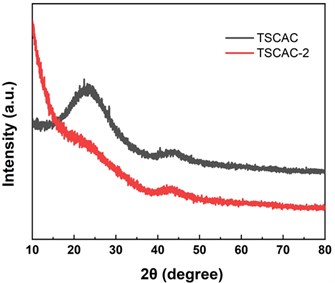 The electrochemical behavior of the tobacco straw core-based carbons were analyzed in 6 M KOH electrolyte within a three-electrode system in CHI 760E electrochemical workstation (Chenhua, China). The working electrode was prepared by pressing the biochar samples, acetylene carbon black, and PTFE (5 wt. %) binder on the nickel foam current collector at a ratio of 8:1:1. Platinum sheet and the Hg/HgO were used as the counter electrode and reference, respectively.

Fig. 3(a) is the CV curve diagram of TSCAC-X series samples at a scan rate of 10 mV s-1. All the CV curves display a relatively symmetric rectangular shape and display a good current response, signifying the TSCAC owns the energy-storage mechanism of electrochemical double-layer capacitance (EDLC) behavior. The physical phenomena of electrostatic storage occurring at the electrode-electrolyte interface. The nearly rectangular shape of CV also suggests reversible electro- chemical performance. The areas of the CV curves reflect the capacitance value. As a result, the capacitance of TSCACs electrodes decreases in the order of TSCAC-2 > TSCAC-3 > TSCAC-1 > TSCAC. The above results can be attributed to the continuous and complete porous structure and a large specific surface area (Fig. 1). 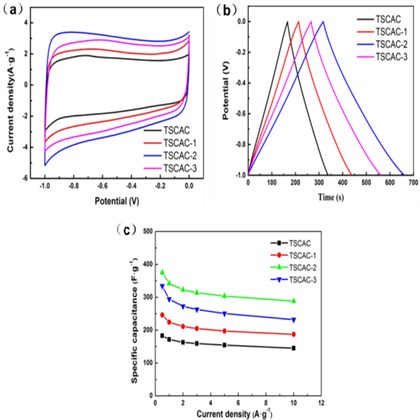 As shown in Fig. 3(b), galvanostatic charge-discharge (GCD) profiles of all TSCAC-based electrodes had triangular symmetrical distribution recorded at 1 A g-1 current density, suggesting their quasi-EDLC characteristics. The lowest specific capacitance of 171.3 F·g-1 was recorded for TSCAC and slightly higher capacitance of 224.0 F·g-1 for TSCAC-1 (increase by 30.8 %). When the mass ratio of ZnCl2 chloride to precursor is 2:1 (TSCAC-2), it led to the 2-fold increase of the specific capacitance (342.0 F·g-1) in comparison to TSCAC. In contrast, the specific capacitance (294.1 F·g-1) of TSCAC-3 was lower than TSCAC-2. TSCAC-2 exhibited the highest specific capacitance compared to other TSCACs samples, which is mainly attributed to the well-developed porosity of this sample and high specific surface area, which is consistent with the results in Fig. 1(c). These values were similar to the performance of biomass activated carbon reported in other studies, as shown in Table 3.

From Fig. 3(c) and Table 2, it can be seen that the electrochemical properties of the activated carbon with the increase of ZnCl2 amount show a trend of first increasing and then decreasing. TSCAC-2 samples show the maximum specific capacitance in the test range, and the specific capacitance retention at 10 A·g-1 is 84.2 % compared with that at 1 A·g-1, showing good rate performance.

Table 2. The comparing capacitance (Cm) of all TSCAC samples

Table 3. Comparison of the electrochemical performance of biomass activated carbon reported in this study and other literature

The effect of mass ratio of tobacco stalk core to ZnCl2 on the electrochemical performance of activated carbon has been systematically studied. The experimental results show that TSCAC-2 was the optimal material, which has uniform porous structures, high surface areas and perfect graphite structure. And TSCAC-2 displays high rate capabilities and high specific capacitance (up to 342.0 F·g-1 at 1 A·g-1 current density), it still can maintain a high capacitance of 288.0 F·g-1 at 10 A·g-1 current density. The results demonstrated that the tobacco stalk core carbons herein to be promising electrode materials. The methodology adopted herein also provides a new approach to obtain porous carbon materials from waste biomass, which may be extended to other sources, such as straw, bark and so on.

This work was financially supported by grants from Guangdong Tobacco Monopoly Administration Science and Technology programs (No. 2019011).