Copyright © 2021 Chundong Xu, et al. This is an open access article distributed under the Creative Commons Attribution License, which permits unrestricted use, distribution, and reproduction in any medium, provided the original work is properly cited.

Generally, the propellant form will only be considered when contact explosion or non-contact explosion near the propellant is studied, therefore, this experimental method considered only the explosive load and ignored the influence of propellant form on shock wave form. The incidence and reflection of shock wave in pipe and superposition between incident wave and reflected wave result in extremely complicated transmission form in the wave. However, as the explosion pressure wave reaches both ends of pipe, it will gradually develop into planar shock waves with steep front edge that are perpendicular to the axis [8, 9, 11]. The pressure shock wave transmits to both end surfaces and generates reflected shock wave on such end surface, as well as an excitation on the sensors installed on the end surface. Only if both ends of the circular tube are sealed and the applied preload value is larger than the maximum negative shock value of impulse response for sensor, can the “negative pressure” then be avoided. Applying different preload values can help analyze the dynamic characteristics of the sensor under different pressures.

Refer to Fig. 2 for the actual structure of water shock tube designed in this paper. The tube body is a high-pressure resistant and axisymmetric structure; a special sealing flange can be used to combine different numbers of tube bodies. The tube length can be adjusted to comply with the requirements for different shock wave pressures in the experiment. The explosive material used to generate pressure is put in the geometric center of tube body to not only ensure a consistent display of characteristics of shock wave pressure acted on the standard pressure sensor and the calibrated pressure sensor, as well as to reduce errors. 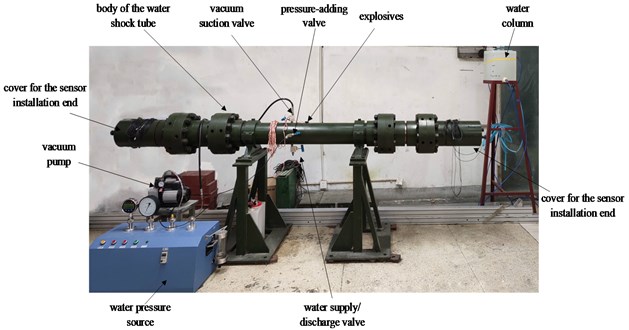 Fig. 3. The standard sensor and the calibrated sensor

The above two sensors are assembled to the installation end cover of the water shock tube, as shown in Fig. 5. The preload is set to 3 MPa. Elsys TraNET high-speed data acquisition system was applied to collect data and its sampling rate can reach up to 10 MHz. Refer to Fig. 6 and Fig. 7 for the shock wave pressure curves of Kistler603C and Kistler6215.

There were several pulses that followed after the first pulse because of the echo resulting from reflection when the underwater shock wave generated from explosion reached an end surface of the water shock tube [9]. The transmission speed of the shock wave was about 1500 m/s, therefore, when the length of the shock tube is overly short, more echoes will be generated and the dynamic response curve of the sensor will be influenced. Therefore, the water shock tube is properly lengthened during the design. 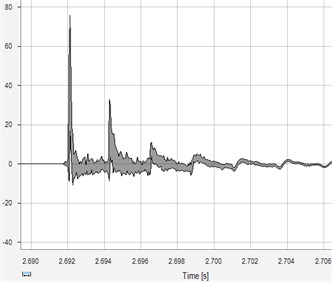 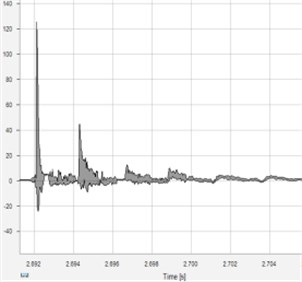 From Fig. 8 and Fig. 9, it can be seen that preload offers a certain degree of influence on the shock wave pressure curves of the sensors, and the corresponding pressure offset may generate after the application of a certain amount of preload to increase the total pressure, therefore, a sensor with an appropriate range can be selected and used in experiment based on the specific preload value. According to Fig. 8, the peak value of Kistler603C is larger than Kistler6215 under same preload, because the shock wave will firstly pass through pressure hole and then act on Kistler6215. The actual working band range of Kistler6215 will significantly decline due to the influence of the pressure hole, as a result, the effective band of the side shock wave signal cannot be covered completely, resulting in large dynamic errors. 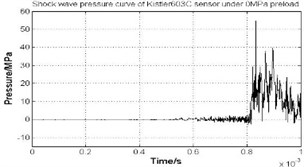 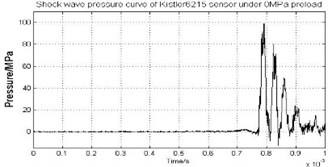 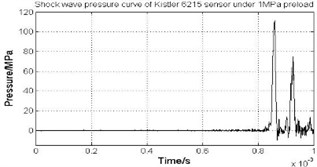 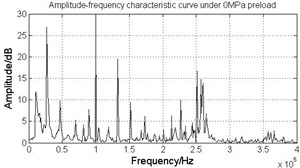 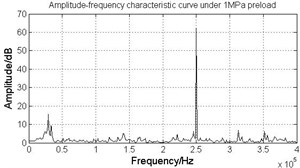 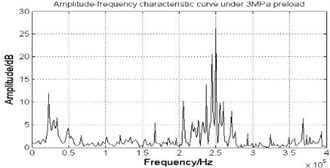 From Fig. 10, it can be seen that when the preload is 0 MPa (i.e, no preload applied), the amplitude-frequency curve becomes extremely disordered, because the sensor results in negative peak-clipping distortion, forming “negative pressure” [9]. Consequently, the dynamic response curve cannot normally and accurately reflect dynamic characteristics. When the top pressures are 1 MPa and 3 MPa, the natural frequency of calibrated pressure sensor (Kistler6215) is about 250 kHz, therefore, preload has no influence on the amplitude-frequency characteristics of the system. According to the specification of the sensor, the natural frequency of Kistler603C series’ sensors is about 400 KHz and the value will become small after the application of the reciprocal formula, therefore, it is not obvious in the waveform shown in Fig. 7. According to the specification, the natural frequency of Kistler6215 series’ sensors is about 240 KHz, which complies with the experimental results.

According to Fig. 10, the amplitude-frequency curve has a frequency concentration point in the range of 0~50 kHz resulting from the pipeline effect due to the installation structure of the Kistler6215 pressure sensor. According to Fig. 9 when Kistler6215 is installed on the end cover, its sensitive surface is designed with a sealed measurement hole as both a partition and a pressure transmission hole, instead of being directly exposed in front of shock wave. According to the specification of the sensor, such sealing measurement hole shall be set with depth of 2~3 mm and a diameter larger than 5 mm. The dimension of pressure hole in this device is 10×5 mm. Although the sealing measurement hole in this experiment is filled with special sealing silicone in which sound velocity is about 900 m/s, according to the simplified formula for the natural frequency of pipeline effect described in the specification of Kistler6215 sensor, , the natural frequency of the silicone filled in the sealing measurement hole is about 22.5 kHz, which is basically consistent with Fig. 10.

The experimental calculation method for the dynamic characteristics of underwater shock wave pressure sensor proposed in this paper can effectively calculate the dynamic transmission characteristics and natural frequency of the calibrated pressure sensor. Compared with the previous underwater explosion containers, the water shock tube used in this experiment features a small volume, low operation difficulty, and low cost. In addition, the water shock tube can, through the application of preload, simulate water depth and avoid damage on the sensors from reversed negative pressure. The pipeline effect occurred in this experiment can be eliminated or avoided through properly designing the installation structure for the sensors, as a result, measurement errors can be reduced.

According to the analysis in this paper, the following conclusions can be drawn:

1) Different preloads have significant influences on the time domain waveform of the sensor, and the pressure peak increases with the amount of applied preload. Therefore, sensors with an appropriate range can be selected based on the preload value.

2) A negative pressure will form when no preload is applied (preload = 0 MPa), the amplitude-frequency characteristics cannot be obtained accurately, or sensor may be damaged. Therefore, a certain amount of preload must be applied.

3) Different preloads have no influence on the calculation results of the amplitude-frequency characteristics of the calibrated sensor, and the dynamic characteristics are basically consistent.

4) The experimental calculation method for the dynamic characteristics of underwater shock wave pressure sensor proposed in this paper can provide guidance and reference for future works on pressure sensor calibration.