Copyright © 2021 Orlando Santiago Júnior. This is an open access article distributed under the Creative Commons Attribution License, which permits unrestricted use, distribution, and reproduction in any medium, provided the original work is properly cited.

Deep bite malocclusion impacts function of the stomatognathic system, patients’ quality of life and self-stem by compromising oral and facial esthetics. The malocclusion can involve teeth and facial skeleton, for such is one of the most challenging malocclusion treatments. The aim of this investigation is to check the clinical belief that Planas’ Equiplan is efficient to treat deep bite malocclusion. Dental overbite was measured in 21 patients submitting to Jaw Functional Orthopedics treatment at post-graduation course. The inclusion criteria were a vertical trespass of the incisal border of the upper incisors covering the vestibular face of the lower incisors more than 3 mm, treatment cooperation and a consent form signed by the patients, or their legal tutor, allowing the use of the data obtained for research and didactic purposes. The initial measurement (T0) and 15 months treatment (T1) was collected to study overbite behavior during treatment with Planas’ Equiplan. The mean overbite of the sample at T0 was 5,02 ± 1,311 mm, at T1 the mean overbite was 2,38 ± 1,026 mm. The difference T1-T0 is –2,65 ± 1,462 mm (0,01). The data presented here supports the efficacy of the use of Planas’ Equiplan in the treatment of Deep bite Malocclusion. 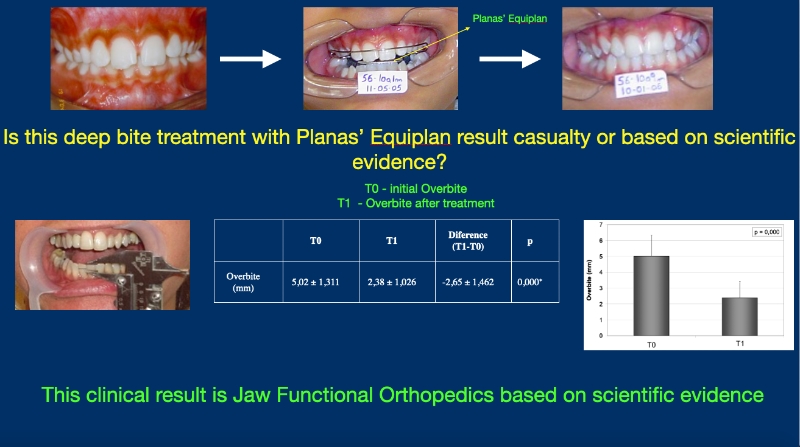 Deep overbite has been considered as one of the most common malocclusion problems that are difficult to be treated and retained. Correction of the deep bite is often a main objective of the orthodontic treatment because of its potentially detrimental effects on periodontal health, temporomandibular joint function, as well as esthetics [1, 2]. Prevalence of deep overbite was found to be 21 % to 26 % in the normal population [3], and about 75 % in orthodontic patients [4].

Deep bite is a malocclusion that can have dental or skeletal component. Among the clinical characteristics of deep bite are short anterior lower face height, reduced mandibular angle (skeletal etiology), supra occlusion of incisors/infra occlusion of posterior teeth and deeper curve of Spee (dental etiology) [5].

In a study among Mongolian adolescents Araki et al. [6] found that deep bite and increased overjet malocclusions affect oral health-related quality of life and deep bite malocclusion was significantly associated with oral symptoms and functional limitations. Biomechanical alterations in the Stomatognathic System in individuals with deep bite malocclusion are reported [2, 7-9].

The Equiplan is an accessory described by Planas as “a stainless-steel plate with 0.3 or 0.4 mm thickness, 2.5 cm long by 1.5 cm wide, with a slight curve and a 1.5 mm step. It has some retentions on its back to be fixed to the acrylic” [10]. For more information about treatment planning using Equiplan and fixing the equiplan in the functional orthopedic appliances reading of Planas [10], Simões [11], Santiago et al. [12] and Santiago Jr., Santiago [16] is recommended.

In his craniofacial growth and development laws, Planas describes his theory about the Equiplan Modus Operandi. Equiplan arose from the great difficulty of correcting the symptomatology of an exaggerated vertical Deep Bite. “The spectacular result and success in different patients were what was missing to make it available to the professional class” [10].

Since deep bite is a prevalent malocclusion that brings functional and emotional negative impacts to the individual, a clinical study about the subject brings more knowledge and clinical tools to help clinicians and patients.

The sample was composed by patients treated in JFO post-graduation in the Brazilian Association of Dentistry – Muriaé – MG. 257 patients, of both sexes were treated, 69 (27%) patients presented deep bite malocclusion. All the individuals or their legal tutors signed a consent form allowing the use of their treatment data for research and didactic purpose. The students did not know why they are measuring the patients.

Of the 69 patients with deep bite, 22 were treated with functional orthopedic apparatus combined with Equiplan. One of them gave up treatment after 12 months. Regarding gender, 7 patients are male and 14 female, and 1 abandoned treatment after 12 months. The mean age of the sample 16.92, the youngest at 9 years and 1 month of age and the oldest at 39 years and 1 month, both male. An evaluation of treatment efficiency was made after 15 months.

The inclusion criteria were a vertical trespass of the incisal border of the upper incisors covering the vestibular face of the lower incisors more than 3 mm [17], treatment cooperation and a consent form signed by the patients, or their legal tutor, allowing the use of the data obtained for research and didactic purposes.

There was no control group based on the findings of Dimberg et al. [18] that self-correction of malocclusion from de primary to early permanent dentitions was noted for anterior open bite, sagittal malocclusions, and posterior crossbite, while deep bite developed.

We used the data collected in the individual form of monthly measurements from the date of placement of the Functional Orthopedic Appliance (T0) up to 15 months of treatment with functional orthopedic appliances with Equiplan (T1) (Table 1). The overbite measurements were collected by requesting that the individual close the mouth in the maximum habitual intercuspation position, dry with air jet the vestibular face of the upper and lower incisors and was traced with a pencil on the vestibular face of the lower central incisor the trespass of the incisal edge of the upper central incisor. With the patient with the mouth ajar, the upper part of the caliper is positioned on the incisal border of the lower incisor and the lower part of the caliper in the mark obtained. For measuring the overbite analog calipers were used. (Fig. 1). 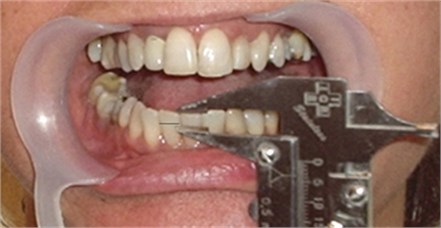 SPSS 11.0 was used in statistical analyses. The assumption of normality was verified through the Shapiro-Wilk test. As the initial and final values of overbite in patients with Deep Bite presented approximately Normal distribution (0.05), in the comparison between the means at T0 and T1, the t-test for paired samples was used at a significance level of 5 %.

Table 1. Overbite measures obtained at T0 and T1. Age of patients on the date of functional orthopedic appliance placement

Table 2 presents the values of initial, final and difference mean and standard deviation for Overbite (mm), and the p-value resulting from the comparison between the means, obtained through the t-test for paired samples. The mean overbite of the sample at T0 was 5,02 ± 1,311 mm, at T1 the mean overbite was 2,38 ± 1,026 mm. The difference T1-T0 is –2,65 ± 1,462 mm (0,01) shows that Planas’ Equiplan is an effective tool for deep bite treatment.

The results indicated that the values of overbite (mm) after treatment (T1) were statistically lower than the initial (T0) values ( 0.000), besides being closer to zero. The mean difference between the final (T1) value and the initial (T0) value was –2.65 ± 1.462 mm, indicating that the patients had a reduction in the value of the overbite (mm). The decrease in overbite values means reduction of deep bite (Table 2).

Fig. 2. The mean and standard deviation of the initial (T0) and final (T1) Overbite (mm) values 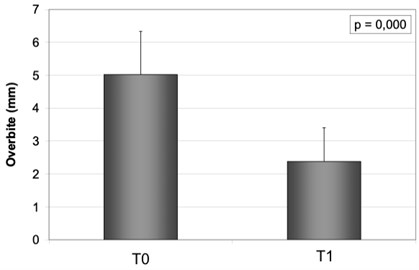 In the treatment plan of cases with Deep Bite, the following factors should be considered: vertical growth of the face, position of the Occlusal Plane, inclinations of the lower incisors, possibilities of incisor intrusion and mandibular rotation [11]. The Equiplan must be used in the treatment of deep bite basically in two situations. Individuals with short face, or individuals with meso face with severe deep bite. When occurring in individuals with long face the deep bite must be treated with Equiplan in very special situations [19, 20]. In the treatment of Deep Bite using Equiplan, the direction of growth of the mandible is more important than that of the maxilla to define the use or not of Equiplan [10].

Searching in the literature published in the last two years in Portal Capes, only one article reports the use of raising the bite with disocclusion of posterior teeth. It is case report by Pratiwi and Purwanegara [5] with the use of a removable bite plate. Santiago Jr et al [12] reported a functional orthopedic appliance with equiplan. None of them show any statistic data about treatment effectiveness.

As for non-surgical treatment, two options were presented: orthodontic appliances with or without mechanical orthopedic accessories (like mini-implants, or extraoral appliances, for instance) intruding incisors and/or extruding molars [1, 8, 13-15, 21-23] and functional orthopedic appliances stimulating eruption of posterior teeth and inhibiting eruption of anterior teeth [5, 10-12, 19].

Extrusion of posterior teeth is controversial. Sakima, Tanne, Sachdeva [22] do not recommend the extrusion of posterior teeth due to the risk of relapse caused by occlusal forces due to the reduction of interocclusal free space. Williams et al [23] recommends the extrusion of superior molars and distal movement to increase the angle of the maxillary and mandibular planes. All the authors that recommend the orthodontic approach [1, 8, 13-15, 21-23] base in leveling the arch for deep bite correction. According to Planas [10] and Simões [11] the treatment of deep bite with equiplan has the same goal promoting eruption of the posterior teeth. For such Equiplan must be used in long face individuals in very special situations [19].

The Equiplan demonstrated efficiency in deep bite treatment in the short term. Since mandibular rest position adapts to the new occlusal vertical dimension obtained by the treatment with Equiplan, it seems that relapse is not very common, but that is another clinical belief that has to be checked with more investigations.

The data obtained is in accordance with Santiago Jr [20] who stated that nothing replaces Jaw Functional Orthopedics in the treatment of vertical problems. Planas [10] and Simões [11] reported deep bite treatment success reporting some cases on their book. The three authors mentioned above, besides no statistical data on their publications, made correct statements proven with the data obtained in this investigation.

According to Simões [11], Equiplan exerts an action of capturing energy through the anterior teeth by repositioning the mandible, allowing eruptive movements and favoring the increase and maintenance of the vertical dimension. As demonstrated by PLANAS [10] Equiplan promotes direct excitation, resulting in an increase in vertical dimension through the lower Occlusal Plane, thus producing a compensatory response in the superior Occlusal Plan. The efficacy of the Equiplan is partially proved here, but these theories by Simões [11] and Planas [10] still need to be checked.

Equiplan proved to be efficient in the treatment of Deep Bite in the short term.

More investigations are needed to study the long-term effect of Equiplan and its Modus Operandi.