Copyright © 2022 Murilo Bovi Corsi. This is an open access article distributed under the Creative Commons Attribution License, which permits unrestricted use, distribution, and reproduction in any medium, provided the original work is properly cited.

In this article, the treatment of two clinical cases is presented, in which the two patients showed distocclusion, severe overbite, required correction of the occlusal plane and movements of the mandible. Both were treated with functional orthopedic appliances In the first case. the patient was 4 years and 5 months old, and in second, 10 years 10 months old. Both had a significant pathological occlusal plane with a large difference in the height between the right and left sides. The lateral movements of the mandible showed completely different Functional Masticatory Angle Planes. The protrusion and opening movements of the mandible also showed deviation. The Functional Orthopedic appliance would advance the position of the mandible forward and would produce better responses if it were able to touch the incisors in the specific area. The forward mandibular position would activate the Ihh (Indian Hedgehog) and produce replication of the mesenchymal cells in the condyle and glenoid fossa. Moreover, it could produce an increase of mandibular length, and regulate the factors of mandibular condylar growth. The space produced between the occlusion as a result of the change to the forward mandible position must stimulate tooth eruption to correct the curve of the occlusal plane. Both cases showed balance of the occlusal plane and same functional masticatory angle Planes. Furthermore, the protrusion and opening movement of the mandible were corrected and no longer showed deviations. Note in both cases that the stability of the mandibular advancement occurred due to maintenance of twice as long to achieve incisor contact.

Cases of malocclusion (distocclusion) with severe overbite must be treated as soon as it is diagnosed. The early treatment can improve adjustment of development of the maxilla, occlusal plane and balance of the ATM.Furthermore, it produces a physiological balance of the mandibular movements (lateral, protrusion, opening and close) and the muscle system.

Presentation of the first clinical case concerns the patient, a boy aged 4 years 5 months. In Fig. 1, please note the malocclusion (distocclusion) with overbite, maxillary atresia with the buccal inclination of teeth and deep curve of the occlusal plane. 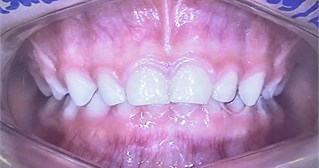 After 3 months, Fig. 2 shows the initial mandibular advancement with contact of the incisors,improved development of the maxilla, and improvedposition of the teeth. 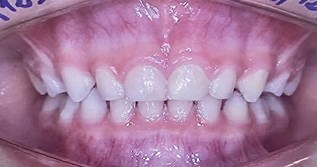 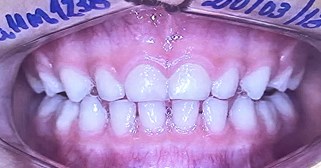 After 6 months, Fig. 3 shows the correction of malocclusion (distocclusion) with overbite and mandibular advancement with incisor contact in DA. Furthermore, improved development of the maxilla and correction of the buccal inclination of teeth were shown. Please, note the remodeling process was taking place and the interocclusal space appeared on the left side, which was larger when compared with the space on the right side. It is also important to reshape the balance of the curve of the occlusal plane curve by tooth eruption and balance of the muscle strength.

In Fig. 4, at 9 years 11 months, shows maintenance of the advanced mandibular position, incisors in contact and correction of distocclusion with overbite. Furthermore, please note correction of the occlusal plane in the permanent dentition, with a light Spee Curve and the same level of height on both the left and right sides. 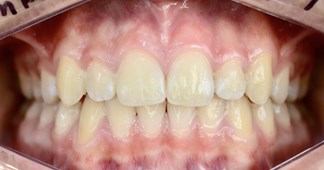 Fig. 8 showsmaintenance and stability of the mandibular position at 9 years and 10 months after the patient was treated. 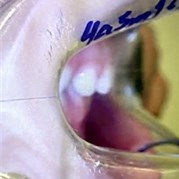 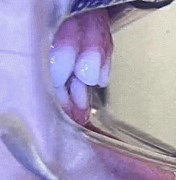 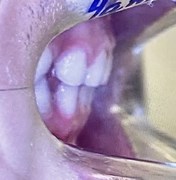 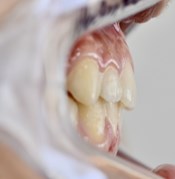 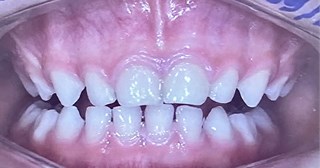 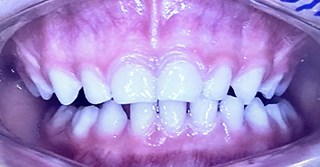 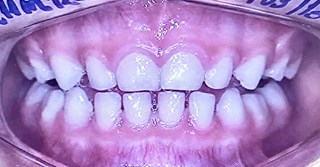 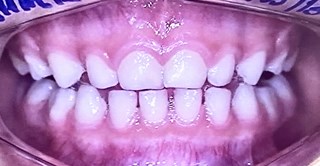 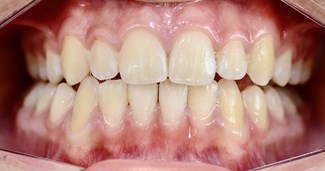 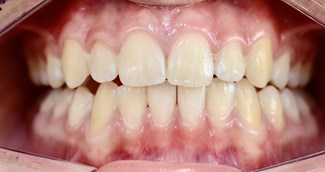 Presentation of the second clinical case concerns the patient, a girl aged 10 years 10 months. Fig. 15, in a front view, note the severe malocclusion distocclusion with severe overbite and left incisor midline deviation; buccal tipping of teeth 12, 21 and 22. Compare the difference between the level of height of the curve of occlusal plane and note that the left side is higher than the right side.

In Figures 16 and 17, right and left sideviews, respectively, please note the severe malocclusion distocclusion with a change in the curve of the occlusal plane. Note the large difference in the position of height between central incisor (higher) and pre-molar (lower). 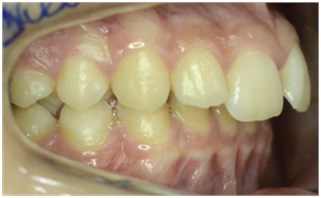 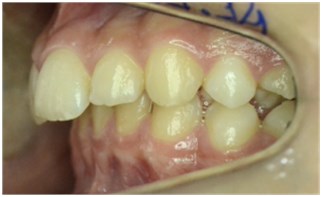 In Fig. 18, profile side view, note the severe distocclusion with overbite. 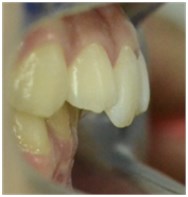 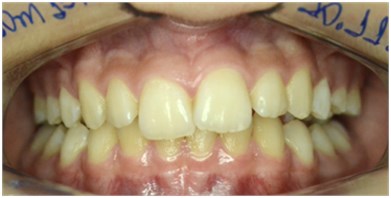 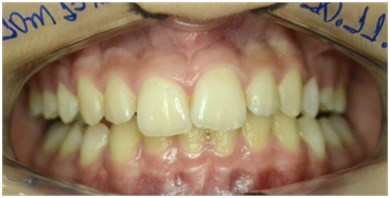 In Figs. 19 and 20, respectively, initial of right laterality movement and left laterality movement, note that the Functional masticatory angle according to Planas is smaller on the left side. Furthermore note the lateral-retrusion movement of the mandible on the right and left sides. Teeth position of 43 and 33 are in distal position in relation to teeth position of 13 and 23, respectively. Moreover, the posterior teethdo not touch the molars.

The movement of protrusion movement showed a deviation of 4 mm to the left side.

Lavergne/Petrovic analysis shows SNA = 82.5 and SNB = 76.5. Anterior Rotation of the Mandible (A), Capacity for Growth Potential at Tissue Level 5 and Normal Relation between Jaw and Mandible (1), Distal Sagittal Relation of Mandible (D) with a favorable prognosis.

In Figs. 22 and 23, right and left sideviews, respectively, note correction of the curve of the occlusal plane and correction of difference in the level of height between the central incisor and pre-molar. 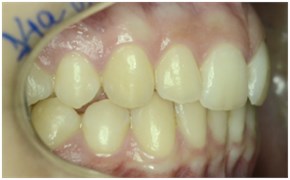 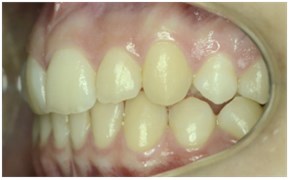 In Fig. 24, profile side view, note correction of the distocclusion with overbite and advancement of the mandible with the incisors in contact. 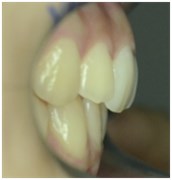 The movement of protrusion no longer showed deviation of the midline.

Both clinical cases showed balance of the occlusal plane, balance in mandibular movements and excellent esthetic result. When the procedures of correction start at an early age, theyprovide better and faster responses to correcting the malocclusion. Advancement of the mandible can lead to better response to the treatment of malocclusion (distoclusion) with overbite. The Functional Orthopedics appliance stimulated and enhanced the Ihh and factors that regulate condylar growth. The forward advancement of the mandibular position with the incisors in contact in DAled to a better response to the treatment to achieve occlusal plane balance and for correcting the position of the teeth. Furthermore, it stimulated the neural-muscular system to balance the mandibular movements.