Copyright © 2022 Patrícia Valério, et al. This is an open access article distributed under the Creative Commons Attribution License, which permits unrestricted use, distribution, and reproduction in any medium, provided the original work is properly cited.

Introduction: Since long time ago, dentists had used parallelism with Camper plane as a reference to establish a correct occlusal plane. However, in the literature, there are several different landmarks used to trace the occlusal plane and there are also many researchers questioning this parallelism. To evaluate it, we used ancient skulls from Human Sambaqui skeletal remains. The authors choose an ancient population because they were submitted to same environmental conditions, avoiding bias in craniofacial growth epigenetic stimuli. Methodology: For this work we analyzed tomographies of 27 well preserved adult skulls. The program used was Vista Dent Pro 2.1. Camper plane was determined according to the original points described by Peter Camper. We used the four occlusal planes more cited in the literature. Results: None of the occlusal planes evaluated on this study, showed parallelism with Camper plane. The occlusal plane determined by posterior teeth was the one that showed less divergence but still with a high SD and mediana. Conclusion: In Sambaqui ancient population, Camper plane was not a reliable reference to trace occlusal plane. It is necessary further investigations to find a better reference for prosthetic, orthodontic, functional orthopedics or orthognathic surgery purpose. One of the important factors that help us in the establishment of a functional occlusion is the orientation of the occlusal plane. In all dental specialties the establishment of a correct occlusal plane is one important premise. As a matter of fact, in the mouth, there is not a plane but a slight curve. Due to that, what we call occlusal plane is not a plane but a planar representation of a curve. What we have is a curve that touches the most incisal point of the teeth [1]. However, according to the degree of teeth grinding, other reference must be taken to establish the occlusal plane, since the teeth tend to miss the cuspid tips. [2]. Theoretically, in a planar representation, occlusal plane is established by one point on anterior region of maxillae and two posterior points on the posterior region of maxillae, following the mathematical rule of 3 points determining a plane. However, until now, there is no consensus among the authors about which points must be considered [3, 4, 5]. Occlusal plane could be also, oriented using landmarks in the mandibular arch. However, in the mandibular arch there are few accurate landmarks that can be used to orient the occlusal plane [1]. It is extremely important to understand that the correct orientation of the occlusal plane plays a vital role in optimal esthetic achievement. In a dentate person, considering a natural smile, the incisal tips follow the curve of the lower lip. This situation only happens in a correctly oriented occlusal plane. If the plane inclines downward posteriorly, the lip-line viewed from the front will seems straight. With the occlusal plane correctly oriented, a natural anterior curve is achieved almost automatically, contributing to a good sense of beauty [6]. It is extremely important, also, to understand that occlusal plane forms an essential part of the concept of mechanically balanced articulation. All mandible trajectories, with teeth contact, suffer influence of occlusal plane [7] because its spatial position and inclination will determine more vertical or more horizontal contacting trajectories. It will also interfere with skeletal and dentoalveolar bones remodeling since different mandible displacement leads to different muscle action, leading to different stomatognathic system functional balance [8].

However, there is a bigger challenge. How to establish a cranial plane to act as a reference to occlusal plane orientation. The parallelism with ala-tragal line (so-called Camper plane) is the most used as well as the most controversial [1]. When we are talking about re-establishing an occlusal plane in an edentulous individual, the parallelism with Camper plane is almost a consensus. Since many years ago this have been adopted by dentists. However, Camper plane (ala-tragal line) is described in different ways when using soft tissue landmarks [9]. Beside this, originally, the basal line of Camper angle was determined on dry skulls and the objective was to study the facial angle. Camper described the facial angle as formed by one line tangential to the most prominent part of frontal bone near the glabella and the slight convexity of the anterior upper teeth and the other line running from the inferior part of nasal aperture until the center of auditory meatus [10]. So, on original work of Peter Camper there was no reference to occlusal plane, and he did not study it, but many authors recommend even for dentate, the Camper plane as a reference for craniometric measurements of occlusal plane orientation. It was still demonstrated that on dentate patients the Camper plane/occlusal plane parallelism can vary if we use dental posterior landmarks for occlusal plane determination, compared to dental anterior landmarks, reinforcing an absence of accuracy on these measurements if the patterns are not very well established [4].

Accurate evaluation of craniometric variables had been done using dry skulls, mainly when it is possible to use skulls from the same population, submitted to the same environmental influences on its growth and development. So, ancestral skull collection is an interesting source of information to researchers [11]. Paleoindian cultures thrived in Brazil, during the transition to the early Holocene, used shellmounds called sambaquis, to preserve their dead people. Due to that, several perfect preserved crania could be found in many places from the coast to the center of Brazil [12]. One of the biggest collections is in Santa Catarina state at Sambaqui Man Museam (Museu do homem de Sambaqui). Because of the conservation state of the crania, studies of proportion and angles correlation can be easily done. In 2011, Bruno Gribel et al., performed a tomographic study of 40 skulls belonged to this collection [13]. The tomographic files were stored by the authors and this study will use these files. Our main objective will be to evaluate if there is a real parallelism of Camper plane with occlusal plane in this homogeneous population and evaluate which one of the commonly postulated occlusal planes is more parallel to Camper plane.

After tracing the planes, the parallelism between each occlusal plane and Camper Plane were evaluated. Fig. 1 shows an example of each tracing. Fig. 2 demonstrates the angles measurement. 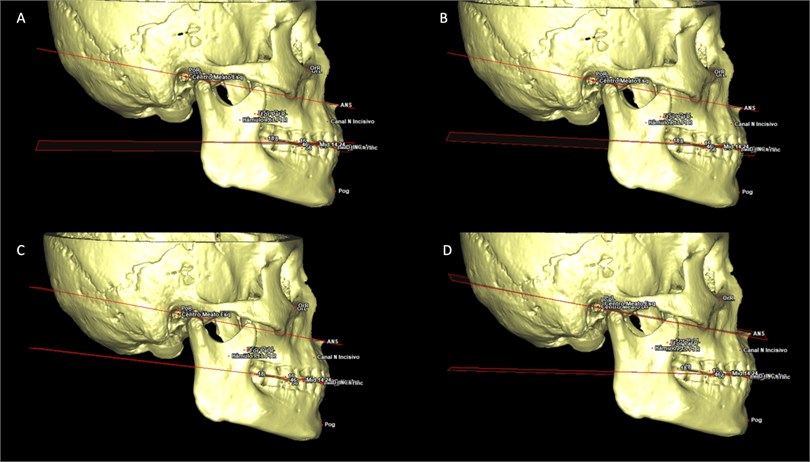 Fig. 2. Angles measurement. Demonstration sample showing occlusal planes used and its correlation with Camper plane. The angle formed between each one and Camper was calculated As expected, since the landmarks to trace occlusal plane varies too much, the angles measurements made on 27 homogeneous crania, showed huge difference according to each occlusal plane used. The results are showed on Table 2. None of the occlusal planes evaluated on this study, showed parallelism with Camper plane. It is important to observe that the standard deviation (SD) as well as the mediana showed a high level of variability on the angles. The occlusal plane determined by posterior teeth was the one that showed less divergence but still with a high SD and mediana.

Peter Camper was a Dutch anatomist, medical doctor, philosopher and draftsman (1722-1789) who studied, among many other things, the mammal cranial shape. His cranial angle (described on introduction) was idealized using as reference the Greek statue profile (around 100 degrees). On his studies this angle descended through the European (around 80 degrees), Asian and African (around 70 degrees), to the orangutan (58 degrees) and tailed monkey (42 degrees). It is important to clarify that his facial angle was not supposed to be understood isolated in profile but in three dimensions. He tried to establish a cephalometric evaluation of the races and his work was misunderstood and he classified as a racist [14]. But there is something extremely interesting. There is no mention on the literature about occlusal plane being part of his studies, neither from his students. The authors made extensive research on databases and did not find it. However, we succeed to find the first citation of the relation of occlusal plane and Camper Basal line plane. It was made by Broomell in 1897 [15]. He was studying the temperamental influence on the occlusion and how to prepare a total prosthesis based on psychological characteristics of the patient and he suggested that the occlusal plane must be parallel to the basal line of Camper angle (inferior part of nasal aperture - center of auditory meatus). It is extremely important to understand that, at that time, an author was not supposed to prove what he was proposing, since being a professor gave a sense of authority for free statements. And, in general, the students of a professor only repeated his thoughts without questioning. Since that time and mainly on the first decades of nineties this concept spread all over the world and became accepted by many dentists [16]. However, on the middle of the century 20, some authors started to question this statement, not only because the parallelism was not present in 100% of normal dentate patients, but also, because the original basal line of Camper angle was determined in dry skulls and ala tragus plane determined on soft tissue, leading to very small accuracy [17-19]. Despite these observations, until now, the so-called Camper plane keeps being suggested as a reference to determine occlusal plane, not only for complete denture but also for orthodontic or orthognathic purpose [20]. Our work is the first on the literature that uses a homogeneous human population with same food consumption behavior and submitted to the same environmental stimuli. We consider this homogeneity extremely important because it was previously demonstrated that different ethnicity can lead to different inclination of occlusal planes [21]. We also tried to contemplate different proposals of landmarks to determine occlusal plane, to avoid interpretation bias. However, all the studied occlusal planes did not show parallelism with basal line of Camper plane. Our results are in accord to recent studies that used different methodologies [22-24] and our work reinforce the necessity of demystify some solidified concepts in dental field that has no realistic scientific support.

In a homogeneous and primitive ancient population, the natural occlusal plane determined by 4 different groups of landmarks is not parallel to the basal line of Camper angle (the so-called Camper plane). Parallelism with Camper plane is not a reliable reference for prosthetic, orthodontic, functional orthopedics or orthognathic surgery purpose. The authors suggest that further investigations must be done to establish a better reference to determine the inclination of occlusal plane.

The datasets analyzed during the current study are not publicly available because ancestral skulls belong to museum collection and will be used for further investigations. However, they are available from the corresponding author on reasonable request.

The author would like to thank Dr. Bruno Frazão Gribel, for kindly provide the tomographic images used on one of his previous works.