Copyright © 2022 Wansheng Wang, et al. This is an open access article distributed under the Creative Commons Attribution License, which permits unrestricted use, distribution, and reproduction in any medium, provided the original work is properly cited.

To clarify the effect of particle gradation of filling soil on the dewatering and consolidation performance of geotubes, the content of four-particle size classes (powder, fine, medium, and coarse) which are commonly used in engineering as the research object was taken. The dewatering rate, soil infiltration and solid-liquid mixing pressure in the bag with time when filling soil with different particles were studied, and the soil loss of the hanging bag was analyzed from the perspective of seepage soil gradation. The research results show that the dewatering process could be divided into the quick dewatering stage, silting stage, and stable stage according to the dewatering rate. According to the performance of soil conservation, it could be divided into the loss stage and reverse filtration stage. Further, based on the effects of powder content, non-uniformity coefficient, and curvature coefficient of soil on the dewatering rate of the hanging bag, a formula for calculating the dewatering rate of geotubes is summarized. 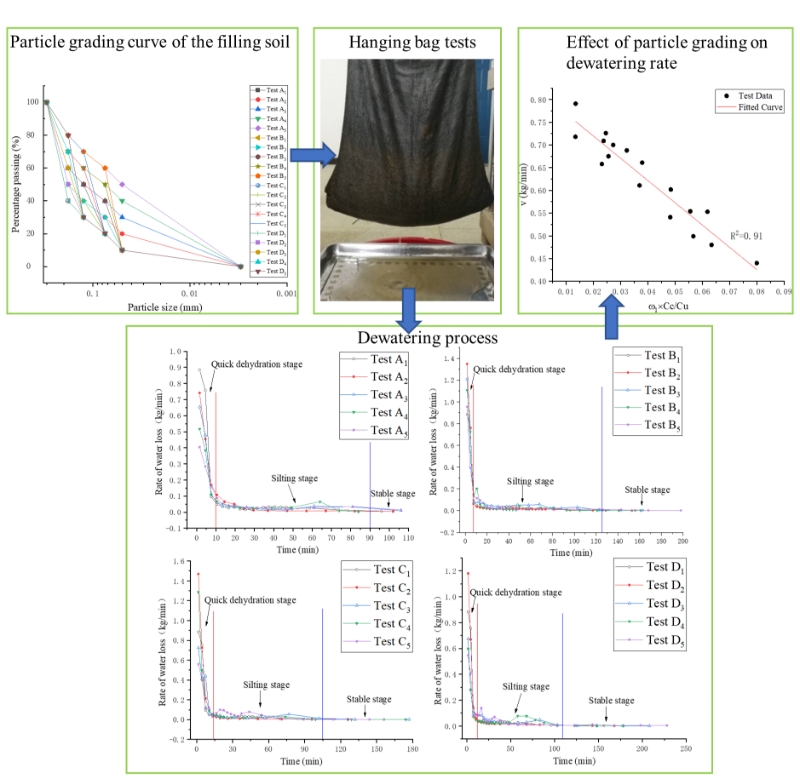 As a new environmental protection engineering technology, the geotubes have been widely used in the construction of reclamation, embankment, foundation reinforcement, and sludge control engineering [1-4].

At present, different degrees of research on the dewatering and consolidation of geotubes from the two directions of the bag material and filler have been carried out by many scholars around the world.

About the filler of geotubes, the particle gradation of the filler has an obvious impact on the dewatering and consolidation performance of geotubes [12]. And the density of filler is a factor in geotubes [13]. Further, Moo-Young et al. [14] found that the content of the initial water of geotubes has a significant impact on the rate of dewatering of geotubes in the test study. And then, Muthukuma et al. [15] studied the variation law of the rate of dewatering with the content of water and the aperture of geotextile for a specific filler. Wu et al. [16] propose an approach to accelerate the dewatering of geotubes through indoor test analysis, and the effectiveness of the approach has been verified by the field dewatering model tests on large-scale geotubes. Chang et al. [17, 18] respectively carried out a test when the geotubes is filled with high adhesive content mud, and propose a corresponding method for dewatering and consolidation. Man et al. [19] studied the influence of silt content in filling sand on the geotubes dewatering performance by hanging bag tests, and three linear calculation formulas for calculating the rate of dewatering have been fitted and analyzed.

In this paper, the hanging bag test method is used to investigate the dewatering characteristics of geotubes under different particle gradation. It is a method to control the size, shape, bag material, and initial content of water of the test, and take each particle size grading of the filling soil as the only variable. With the test results, the effect of the particle gradation of the filling soil on the dewatering rate of geotubes is clarified.

To cover the particle size range of soil that can be used as filling soil of geotubes in various regions of the country as far as possible, the soil used in the test is naturally soil, which can be divided into four levels including powder grain ( 0.05 mm), fine grain (0.05 0.075 mm), medium grain (0.075 0.125 mm), coarse grain (0.125 0.18 mm) according to the particle size. To reduce the influence of other particle size changes on the dewatering rate, only the maximum particle (particle size between 0.18-0.3 mm) content was adjusted with the change of silt content. The particle grading curve of filling soil in each test is shown in Fig. 2. 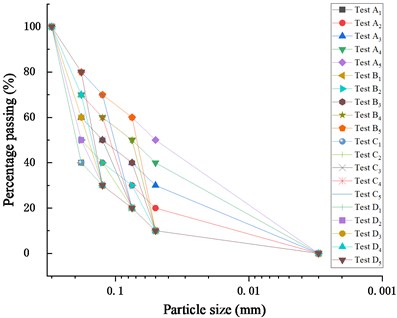 A kind of geosynthetics with good permeability is selected as the material for making the hanging bag. The geosynthetics used in this test are geotextiles with a mass per unit area of 150 g/m2 and an equivalent aperture of 0.07 mm, which are the most frequently used in the geotubes project. The detailed parameters of materials used for hanging bags are shown in Table 1.

Using the method of indoor hanging bag dewatering test, the effect of particle size matching of geotubes filling material on the dewatering rate of geotubes was studied. To accurately obtain the influence of particle gradation of filling soil on the dewatering rate of geotubes, the specification of hanging bag material, bag shape, size, filling method, water content, and solid content of initial mud were strictly controlled. According to the particle size grade of soil particles, the test was divided into four working conditions A, B, C, and D, as shown in Table 2. Five groups of increasing content tests of this particle size grade are carried out under each working condition to simulate the linear change of soil gradation, and , , , , respectively represent the content of powder, fine, medium, coarse and control sand. The hanging bag is with a diameter of 0.5 m and a height of 1 m is sewn with geotextiles.

As shown in Fig. 3, the process of the hanging bag test could be summarized as follows. Firstly, 10 kg of sand and 10 kg of water were mixed into a mud mixture. Secondly, the mud mixture was poured into the hanging bag at a uniform speed. Thirdly, a weighing plate was placed under the hanging bag to receive exudate, and the weighing plate should be replaced and weighed at regular intervals until there was no liquid exudation coming out of the hanging bag. Finally, the received exudate at each interval was weighed again after drying. The mass of sand loss and water loss in each period of time could be analyzed according to the mass of exudate weighed before and after drying. 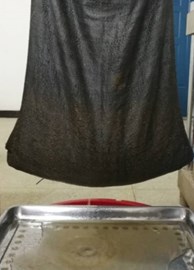 To monitor the change of solid-liquid mixing pressure at different positions inside the hanging bag, pinhole pressure sensors were installed at 15 cm (position 1), 10 cm (position 2), and the bottom of the hanging bag (position 3) respectively before each test. The layout of the sensors is shown in Fig. 4. In the figure, position 3 is located at the bottom geometric center of the hanging bag, the elevation of position 3 is regarded as 0.00 cm, and positions 1 and 2 are located at the geometric center of both sides of the hanging bag, and the elevations of position 1 and position 2 from bottom to top are 15.00 cm and 10.00 cm respectively. The sensor model is DAM-3058R, the sensor is connected to the computer by the USB interface, the real-time monitoring of the change of the mixed pressure of water and sand in the bag during the test, and the computer derives the pressure value of the position of the monitoring point in the bag every 5 seconds.

3.1. The performance of dewatering

Quick dewatering stage: it mainly occurs in the first 10 minutes after the start of the test. This stage is characterized by rapid dewatering and rapid change in dewatering rate value. It plays a leading role in the dewatering process of the hanging bag and is an effective dewatering stage.

Among them, the occurrence time of curve jitter in the silting stage of condition a lags significantly compared with conditions B, C, and D, and only the dewatering rate curve of each test group in the condition jitters once, indicating that silt is not easy to occur in the geotubes when the powder grain is used as the filling of the geotubes.

Loss stage: this stage is the concentrated stage of soil infiltration of test groups under various working conditions, which is about 0-6 minutes, indicating that the stop time of the soil loss stage has nothing to do with the particle gradation of filling soil.

Fig. 5. Dewatering rate of each test group with time under working conditions A-D 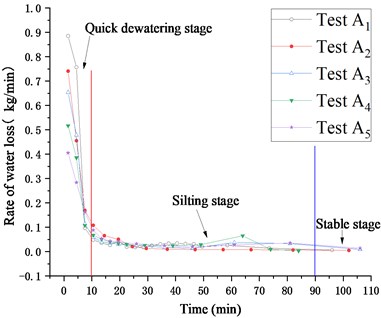 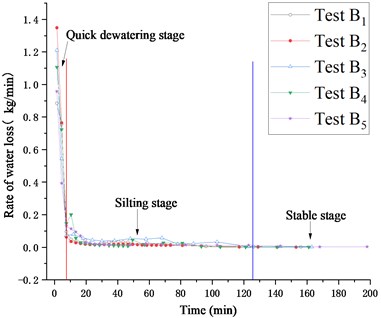 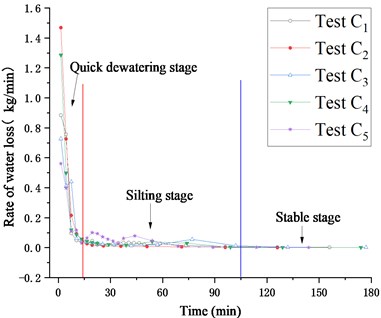 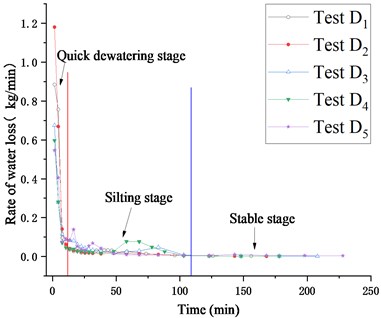 Filtration stage: in this stage, the inverted filter structure gradually begins to form between the filling soil and the geotextile, and with the passage of test time, the relationship curve of the cumulative amount of soil infiltration in this stage with time gradually tends to be horizontal, indicating that the inverted filter structure formed between the filling soil and the bag fabric gradually tends to be stable.

Fig. 6. Variation of cumulative sand infiltration of each test group with time under working conditions A-D 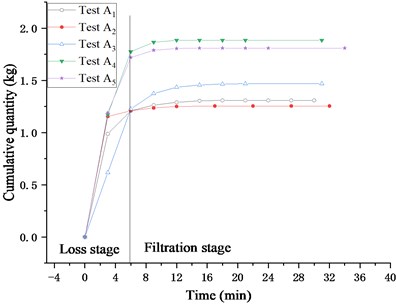 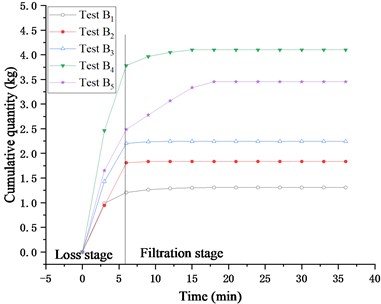 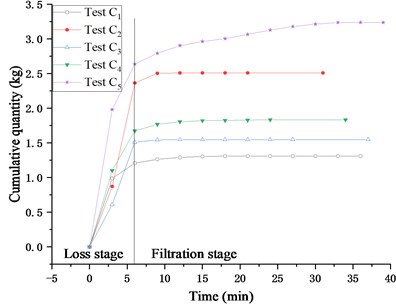 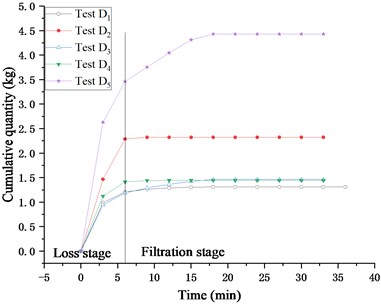 As shown in Fig. 7, it is the time-varying curve of solid-liquid mixing pressure at positions 1, 2, and 3 in the bag during dewatering and consolidation of the test group with high content and large particle size under various working conditions. It can be seen from the Fig. 7 that when the content of a large particle size fraction of the filled soil in the hanging bag is high, the pressure values at three positions in the hanging bag are large during the test. When the pressure value in the bag is large, the solid-liquid mixing pressure in the bag will change from static pressure to active pressure, resulting in the partially filled soil in the bag being squeezed out of the hanging bag through the gap of geotextile in the bag under the promotion of active pressure, it shows that the soil protection performance of hanging bag is poor.

It can be seen from Fig. 8 that the grading curves of seepage soil are above the corresponding grading curve of the original soil, indicating that the seepage soil is fine particles, and the seepage soil gradually becomes fine with the continuation of the dewatering process. Moreover, the seepage soil gradually becomes thicker with the increase of particle size grade of high soil content. Combined with the pressure value change curve in Fig. 7, it can be seen that this is because the pressure in the bag increases, and the large particle of soil is pressed out of the hanging bag. It can be seen that it is not conducive to the soil protection requirements of the hanging bag when the large particle content is too high.

Fig. 7. Variation of solid-liquid mixing pressure with time at test A4, B4, C5 and D5 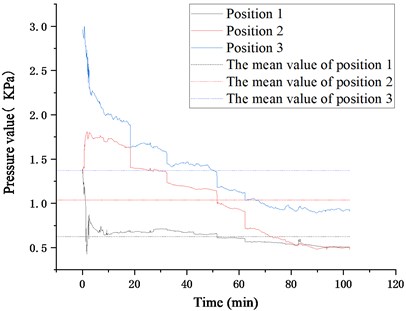 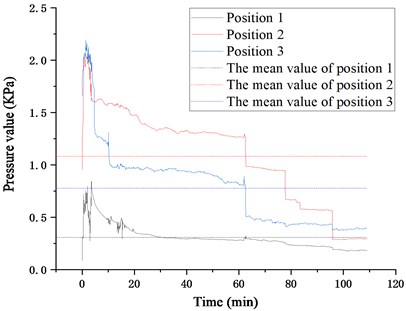 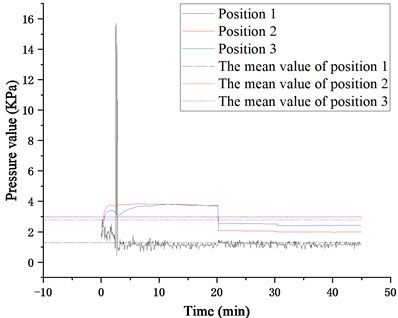 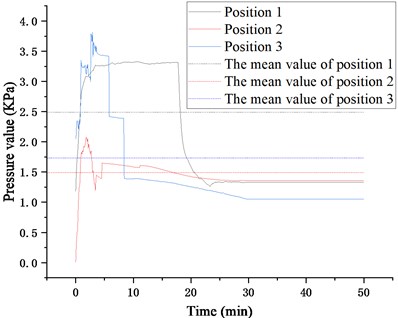 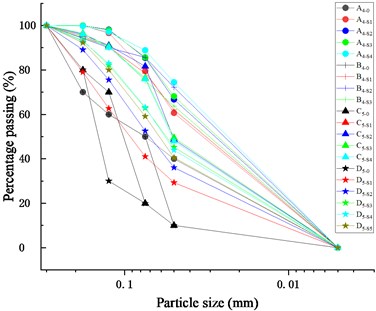 Fig. 9. Relationship between dewatering rate and 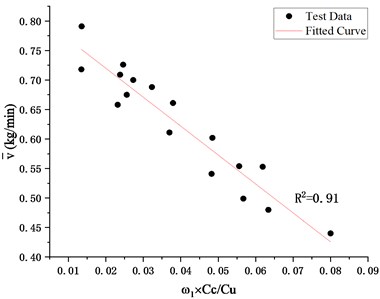 The determination coefficients of fitting formulas is greater than 0.9, indicating that the formula can be well used to analyze the influence of soil non-uniformity coefficient, curvature coefficient, and powder content on the dewatering rate of geotubes.

2) In the process of bag dewatering and consolidation, sand infiltration can be divided into two stages: loss stage and filtration stage. The lower the content of each particle size grade of the filling soil, the faster the hanging bag can reach the stable state of consolidation.

3) The higher the content of large particle size filler, the greater the solid-liquid mixing pressure in the hanging bag, and the worse the soil retaining performance of the hanging bag.

During the actual construction of the geotubes project, it is suggested to avoid filling the soil with high large particle content as far as possible, if there are high requirements for soil retaining performance of geotubes.

4) The average rate of water loss in the quick dewatering stage could be used as an index to evaluate the dewatering rate of the hanging bag. The functional relationship between this average rate and the new parameter for the composition of powder content, non-uniformity coefficient, and curvature coefficient of filling soil is summarized by the new formula.