Copyright © 2022 Ning Xu, et al. This is an open access article distributed under the Creative Commons Attribution License, which permits unrestricted use, distribution, and reproduction in any medium, provided the original work is properly cited.

The integrated water distributor (IWD) is the adjustment terminal during the interval injection process. Its quality and performance are directly related to the effect of layered water injection [1].

Because of the influence of the IWD valve on the flow field, researchers have conducted a large number of experiments and simulation studies [2-5]. Guo [6] based on the theory of multi-rigid body kinematics and modal analysis, and used virtual prototype technology to study the dynamic characteristics of the actuator of the electronically controlled water distributor. Wang [7] established the corresponding mechanical model and imported the Simulink hydraulic simulation results of the pressure of the left piston cavity into ADAMS for dynamic simulation, and carried out research on the adjustment characteristics of the water distributor, such as the pressure difference between the start and the adjustment, the stroke of the control valve and the stable adjustment time. Meng [8] designed the test experiment process, conducted flow test experiments under different displacements for the cableless intelligent water distributor, and established a pipeline flow simulation model of the cableless intelligent water distributor.

At present, IWD is widely used in practical engineering, but the research on the transient flow characteristics of IWD is not enough. In this paper, the instantaneous flow during value closing is simulated, and the mechanical behavior of the valve core is analyzed. The research conclusions will provide a reference for evaluating the operational safety of water distributors.

The continuity equation is shown as:

where , , represents the speed in the , , directions, respectively (m/s).

The motion equation is used to describe the properties of fluid flow momentum conservation. For a Newtonian fluid, the Navier-Stokes equation can be obtained by introducing the constitutive equation of the fluid, which is shown as follows:

Fig. 1 shows the 3D geometric model of the IWD, the material of the valve core is structural steel. The fluid enters the low field of the IWD from the inlet. The inlet pressure is 18.5MPa, while the outlet pressure is 17.1 MPa. In the numerical simulation, the flow field and the valve core need to be calculated simultaneously. Therefore, the flow field in the geometric model needs to be extracted for CFD simulation and analysis. 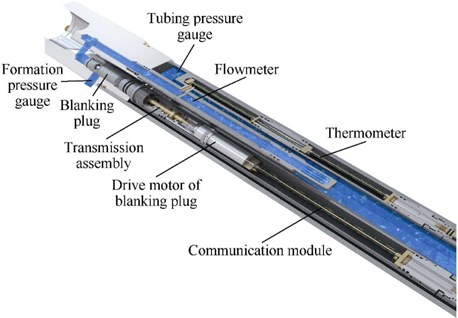 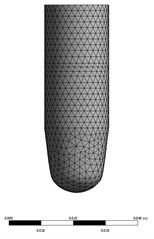 The working fluid is water. The unsteady numerical simulation method is adopted. The flow governing equation is closed with the help of the standard - turbulence model, and the SIMPLE algorithm is used to solve the flow governing equation. The method uses a second-order upwind style to discretize the equations in parallel grid nodes to ensure the accuracy of the simulation results. The pressure inlet and pressure outlet boundary conditions are used for the computational domain, the initial valve pressure is set to 18.5 MPa, the outlet pressure is set to 17.1 MPa, and the turbulence intensity is set to 5 %.

This paper uses the two-way FSI technology of the commercial software ANSYS Workbench to solve the problem. The Fluent and Mechanical respectively perform implicit iterative solutions to the flow field and structural field in each time step, while data (displacement, velocity, and acceleration) have interacted through preset fluid-structure interaction interfaces.

Fig. 4 shows the velocity distribution at different times during the closing process of the valve core. It can be seen from Fig. 4(a) that in the initial stage of valve closing, the valve core has little effect on the flow field characteristics. The high-speed fluid is injected into the inlet, hits the U-shaped pipe wall, rebounds, and then moves toward the outlet. As the outlet section becomes smaller, high-speed areas are gradually formed in the throat and the outlet, and an obvious low-speed area is formed on the underside of the valve core, which is related to the deflection of the flow and the shape of the wall.

As the valve opening decreases, the flow velocity at the throat becomes higher, the maximum velocity reaches about 58.5 m/s, and an apparent velocity gradient is formed. Due to the structural characteristics of the valve core, the fluid flows along the valve core wall after rushing out of the throat, then rebounds after hitting the upper wall and converges to form a second high-speed area. When the valve opening continues to decrease (as shown in Fig. 4(d)), the energy decay of the fluid reduces the flow rate in the two high-speed regions to 43 m/s and 45 m/s, respectively. When the valve is closed, the overall speed is reduced, and the two high-speed zones still exist, but the maximum speed is 12m/s and 14m/s, respectively. speed is 12 m/s and 14 m/s, respectively.

Fig. 6. The deformation and the equivalent elastic strain distribution of the valve core (1.5 s) 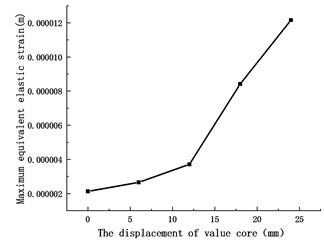 1) In the initial stage of valve closing, a local high-speed area and a pressure gradient area appear at the outlet. When the opening decreases, the high-speed area separates, the flow velocity at the throat increases significantly, and the pressure gradient here is formed. The impact of the fluid makes the upper wall of the outlet form a high-velocity area and low-pressure area.

This work is supported by the Research on the Fluid Flow and the Design Method of Multi-functional Subsea Pipeline Robot (Grant No. U1908228).