Copyright © 2022 Endian Xu, et al. This is an open access article distributed under the Creative Commons Attribution License, which permits unrestricted use, distribution, and reproduction in any medium, provided the original work is properly cited.

As the load-carrying and moving connecting units in rotating machinery, rolling bearings are the most impact- and wear-intensive components. In the manufacturing or long-term service, due to processing errors, constantly external or internal impact load, corrosion, wear and other reasons, the rolling elements and raceways of bearings are prone to produce the local defects, such as pitting, spalling, cracks, dents, and scratches [1]. The occurrence of local defects and their further deterioration will dramatically affect the operating performance of the bearing and significantly increase the vibration level of the bearing. Once the faults in the bearing system cannot be detected in time, the bearing and its corresponding mechanical system may result in serious failure or even catastrophic accident. Therefore, to prevent the bearing from failure deterioration and understand the failure mechanism of the bearing systems, it very essential to systematically study and analyze the impacts of local defect on the dynamic characteristics of rolling bearing. Also, the relevant theoretical analysis is of great significant to the quality inspection and condition monitoring of rolling bearing.

In the past decades, researchers have been conducted lots of works for the healthy rolling bearings. In 1901, Stribeck [2] firstly proposed a static analysis model for ball bearings based on the Hertz contact theory. Palmgren et al. [3] studied the deformation and contact load of the rolling bearing under axial, radial and moment. Jones [4] developed a quasi-static analytical model considering the inertia effect of rolling element. Subsequently, Harris [5] improved Jones’ model and developed a new quasi-static model for the rolling bearing. Their works was named as Jones-Harris (J-H) model. Generally, if the local defect occurs in the running of rolling bearings, the bearing contact characteristics and stiffness will change abruptly [6]. When the rolling element passes through the local defect area, the periodic impulse force will appear which may result in unacceptable vibration in rolling bearing system [7].

Patel et al. [8] established a dynamic analysis model for ball bearings with compound defects at the inner and outer rings, and solved the motion control equations of the bearing, the influence of rolling element and base vibration. Liu et al. [9]-[10] established a rolling bearing dynamic model based on the piecewise function at the local defect edge and the Hertz contact theory, studied different defect sizes, bearing contact mechanical properties and dynamic response under edge shape and plastic deformation. Singh et al. [11] used an explicit dynamic finite element method to study the change of the internal contact load of roller bearing with spalling at outer ring.

Most scholars pay close attention to the dynamic modeling of defect bearing and compare the vibration response of bearings with and without defect. However, there are few studies on the influence of local defect on dynamic characteristics, i.e. the contact angle and contact load between the elements and the bearing raceway.

This paper proposes a mechanical model for the ACBB with the local defect on outer raceway based on J-H model. On the basis, the effects of the circumferential extent of local defect and the number of rolling elements on the ACBB contact angle and contact load distribution are systematically and innovatively studied under external load conditions.

The quasi-static model of ACBB with local defect is built by combining the local defect functions with the mechanical model of normal bearings. 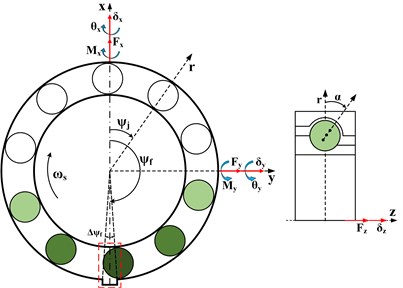 where is the ball diameter, is the pitch diameter and represents initial contact angle. The azimuth of the -th element is:

where is the number of rolling elements. 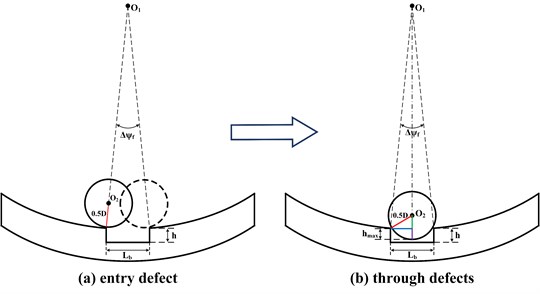 where 1, the gyroscopic moment of the bearing rolling element is equal to the friction force between the raceways. 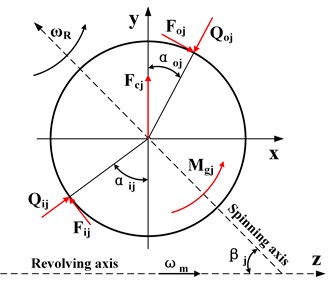 2.3. Equilibrium of equations of inner ring

On the above analysis, the contact forces , and the contact angles , can be calculated. Then, the force balance equations of the inner raceway can be established as bellow:

2.4. Calculation procedure of the theoretical model

To solve the mechanical model of ACBB with local defect given above, the nonlinear equations of inner ring and rolling elements should be solve iteratively based on the Newton-Raphson method. The complete solution procedure for solving the proposed model is given in Fig. 4. 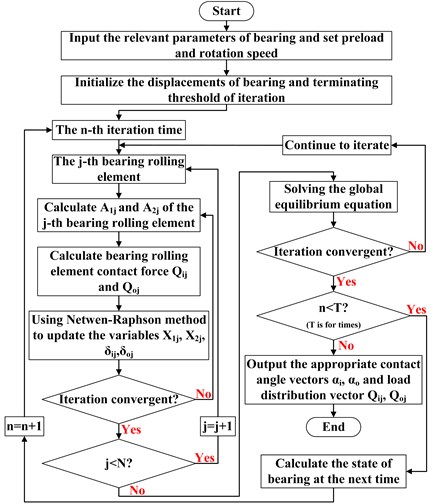 2.5. Validation of the method

The model is validated in this section and the ACBB contact angle and contact load obtained by this method are compared with the results calculated by Wan [16].

Based on the above model, the dynamic characteristics of ACBB B218 under different working conditions are studied and analyzed. The detailed structural parameters of B218 are shown in Table 2. 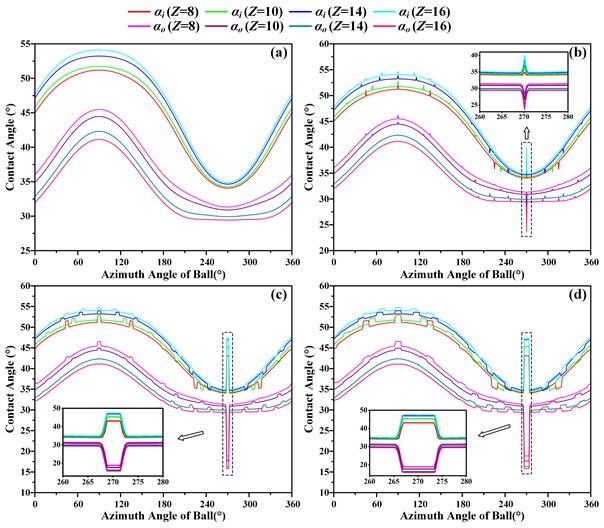 As shown in Fig. 5(b-d) and Fig. 6(b-d), the distribution of contact angles (, ) and contact loads (, ) of bearing with three different local defect sizes 2°, 6°, 10°. When the rolling element passes through the local defect area, the rolling element will neither suddenly drop into the defect region to release the elastic deformation, nor abruptly leave the defect area to obtain the elastic deformation. It can be seen from the figure that when the rolling elements enters into or leaves from the defect area, the contact deformation releasing and obtaining process is in a gradual manner, specifically the distribution of contact angle and the contact load will change in a gradual manner at the edge of the defect. 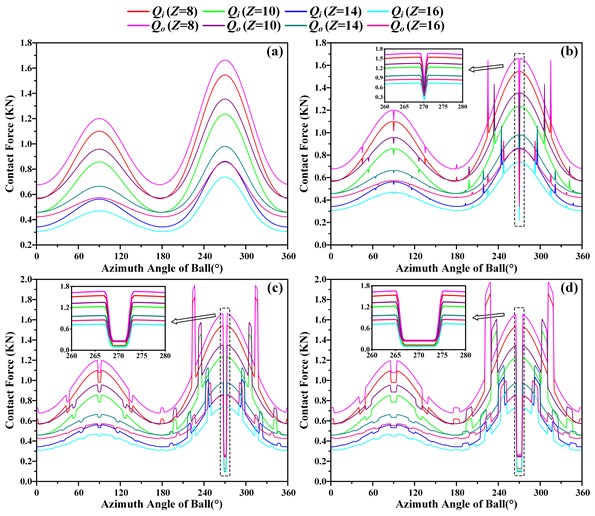 Through the analysis, the following conclusions can be drawn:

1) For healthy angular contact ball bearings operating at high speeds, not all rolling elements are loaded, only the rolling elements in the load zone are subjected to external loads. When the cage rotates, the position and number of bearing rolling elements are constantly changing, which leads to real-time changes in the contact angle and contact load distribution.

3) As the local defects become larger, the contact angle and contact load mutation at the bearing defect will be more obvious.