Copyright © 2022 Fangchao Pang, et al. This is an open access article distributed under the Creative Commons Attribution License, which permits unrestricted use, distribution, and reproduction in any medium, provided the original work is properly cited.

In order to get the more accurate damping capacity and durability of MR damper in the real vehicle conditions. On the basis of fully understanding the working state and damping regulation principle of the MR damper, taking the control current of the MR damper as the variable, the damping characteristic curves under different control currents are obtained. Based on Miner's law and the theoretical support of pseudo damage, through the durability comparison test under three different current control logic combination conditions, a more suitable reliability durability test method for the MR damper is obtained. The results show that under the condition of specific current, the damping value of MR damper will increase with the increase of speed; Under the condition of specific speed, the damping value of MR damper will decrease with the increase of current, and the damping value of MR damper is maximum when there is no current through; The results show that the verification methods that check the damping force and oil leakage of the shock absorber under three different conditions are effective. The second dual frequency durability test method under the condition of current control logic combination can not only shorten the duration of the whole durability test, but also take into account the impact of current change on the durability of the shock absorber, and has more popularization and application value.

With the rapid development of China’s automobile industry and the gradual increase of people's demand for cars, China's automobile manufacturing level has also been greatly improved. In particular, the development of automobile suspension system has also experienced many rounds of updating iteration. From the general passive suspension to the active suspension which can be adjusted adaptively according to different road conditions. In the automotive active suspension system, the damper with continuously adjustable damping plays an important role. On the one hand, it can provide a reliable guarantee for the safe driving of the car. On the other hand, it can adjust the damping coefficient according to the road impact and vibration feedback to improve the riding comfort and driving stability.

In this paper, three MR dampers of the same specification (working stroke 120 mm, working current 0-3 A) are selected for testing. Taking the control current of MR damper as variable, the damping characteristics of MR damper were tested under different control current conditions. Through the test results, the relationship between current variable and damping characteristics of MR damper is analyzed. Based on Miner's rule and the theory of pseudo damage, three conditional durability tests of different current control logic combinations are carried out for MR damper, and a reliability durability test method for MR damper is obtained.

2) Damper exhaust: After the shock absorber is installed, conduct 3 cycles of exhaust process before the formal test. The exhaust process is conducted at the maximum speed of 0.52 m/s (stroke S=100mm, frequency 1.67 hz); 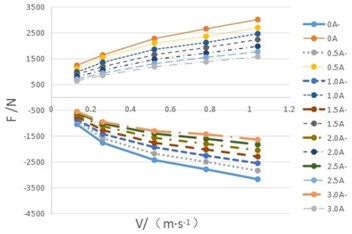 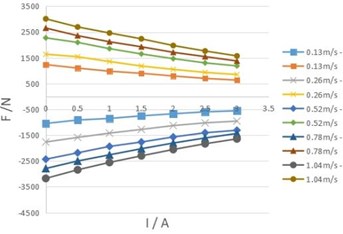 Through the analysis of the test results of the damping characteristics of MR damper, it is pointed out that the damping value of MR damper is the largest when it is not powered on, so the current value of this method is 0 A. In combination with the durability test method in QC/T 491-2018 “Automobile shock absorber technique requirements and test methods”, the current mainstream shock absorber test bench is used to conduct the dual frequency durability test in the way of single action simulating double action, that is, the upper end of the shock absorber is fixed, and the lower end of the shock absorber is connected with the actuator to apply the superimposed wave formed by the superposition of high-frequency signal and low-frequency signal. The superimposed waveform is shown in Fig. 3.

Under the condition of current control logic, the dual frequency durability test method is to introduce current as the control variable on the basis of method 1. During operation, the high and low current (comfort mode 0.32 A, motion mode 1.6 A) of the shock absorber each accounts for 50 % of the life cycle. The current signal waveform is shown in Fig. 4. The double frequency durability test is also carried out in the way of single action simulating double action, and the loaded waveform is the same as the superimposed wave in method 1. 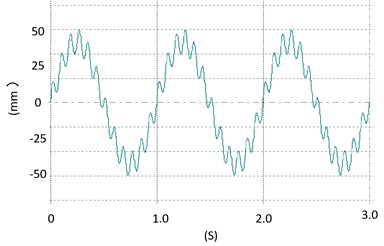 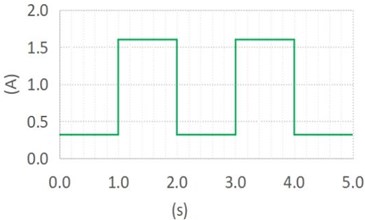 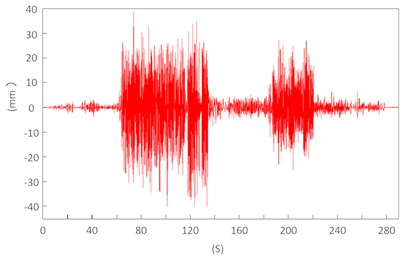 In view of the above problems, we try to use the verification test method to take a section of shock absorber load data by using the data acquisition device under three durability methods (data duration: 10 s for method 1 and method 2 respectively, 280 s for method 3). The purpose of this damage equivalent calculation is to find the correlation between the three different methods. Therefore, the specified S-N curve is used to count the cycle and calculate the damage of the load spectrum data based on Miner’s law, and the relative damage value is used to establish the equivalent relationship under the three test methods.

The simplest S-N curve can be expressed by Basquin equation:

where is material parameters, is stress amplitude, is damage index, is fatigue life under amplitude load.

Then, Miner’s rule is used to sum the damage of each amplitude:

where is cumulative damage.

In this paper, three identical shock absorbers are selected, and one of them is selected to carry out the durability test according to the standard requirements of methods 1, 2 and 3 according to the times calculated according to the pseudo damage. In order to eliminate the influence of temperature on the test results, forced cooling measures are adopted during the durability test to keep the temperature of shock absorber at 70±10 ℃. In order to eliminate the influence of personnel and equipment on the test results, this test is conducted by the same personnel on the same equipment.

The test results only need to assess the damping force attenuation and oil leakage. Before and after the durability test, measure the damping force value of the shock absorber at the speed of 0.52 m/s (for method 1, the measured current is 0 A, for method 2 and method 3, the measured current is 0.32 A and 1.6 A respectively). See Table 3 for the test results.

2) Based on the theory of damage equivalence, the equivalent relationship among the three is established by using miner’s rule and pseudo damage calculation. Through the verification of three different test methods, the durability test methods under three different current control logic conditions are effective.

3) Method 2: the dual frequency durability test method under the condition of current control logic can not only shorten the duration of the whole durability test, but also take into account the impact of current changes on the durability of shock absorbers, which is more worthy of popularization and application.

F. Pang would like to thank senior engineer Liu Wei and Dr. Niu Zhihui for their valuable discussions, which have improved the quality and presentation of the paper.