Copyright © 2022 Li Cui, et al. This is an open access article distributed under the Creative Commons Attribution License, which permits unrestricted use, distribution, and reproduction in any medium, provided the original work is properly cited.

Quay Cranes are in a very important and unique position in the increasingly fierce international trade and port competition. Quay Cranes are typical welded metal structures. In addition, when the quay crane is working, the trolley is constantly started and braked, or the suspended load is shuttling between the front and rear main beams at high speed, resulting in alternating stress in the structure and causing dislocation movement accumulation and fatigue cracks. However, the current main health monitoring methods of quay cranes are still based on the visual inspection of experienced personnel and magnetic particle inspection, which obviously cannot meet the huge demand of quay cranes [1].

It is assumed that the mean value of real random signal is zero and -order is stationary. If the -order cumulant of exists, the -order spectrum is defined as the ()-dimensional Fourier transform of :

When 3, the third-order spectrum is also called bispectrum, expressed in .

The estimated bispectrum[5-6]can be expressed as:

where is the Fourier transform determined by the sequence of principal values of ; means complex conjugate.

and in are two mutually independent frequencies, which can represent non minimum phase information. is a double periodic function with the same period. The period is 2, and satisfies:

There are six symmetry lines which are , , , , and in . Since the bispectrum satisfies such high symmetry, all the bispectrum can pass through the symmetric region , , .

In this paper, an 80 t-65 m quay crane is taken as the prototype to build the finite element model. The relevant parameters are shown in Table 1. The material of the quay crane is Q345 steel, and the material property is: elastic modulus 2.06×1011 Pa, Poisson's ratio = 0.3, density = 7.85×103 kg/m3. In this paper, the quay crane is set in the working state, that is, the crane is completely locked and in the windless environment. Therefore, the front girder can be regarded as a complex cantilever beam model, and fixed constraints will be set at the bolt holes on the land side. This is to simplify the model and calculation.

Table 1. Main parameters of the model

When the breathing crack transits from the fixed end near the land side to the free end near the sea side, the second harmonic in the bispectrum gradually changes from obvious to not obvious, but the amplitude of the second harmonic is the smallest in the middle section of the front girder; When the crack is close to the fixed end on the land side and the free end on the sea side, the amplitude of the second harmonic is larger. However, it should be noted that this change rule is not invariable, and may generally change due to the difference between the position where the excitation is applied and the position where the dynamic response is extracted.

Fig. 1. Diagram of damage position on the front girder of the quay bridge

Fig. 2. Three-dimensional bispectrum when the damage is at different position 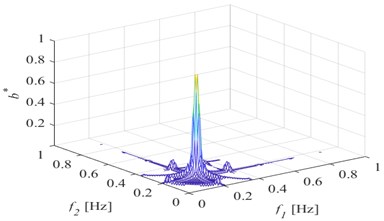 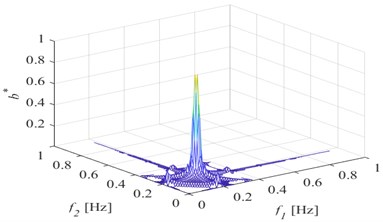 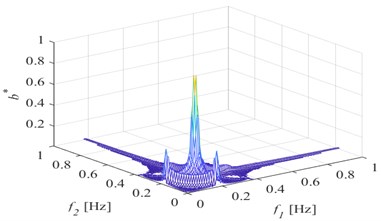 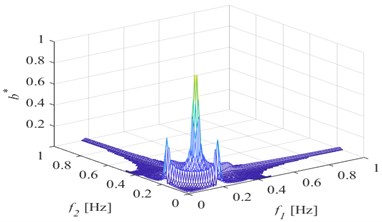 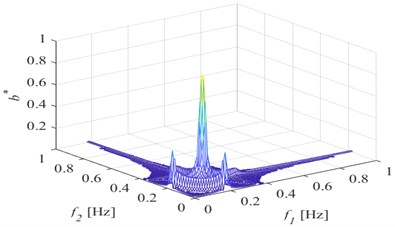 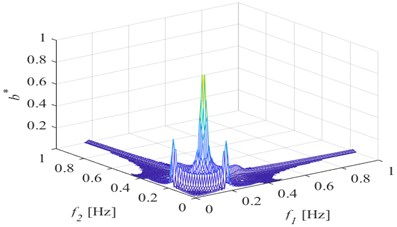 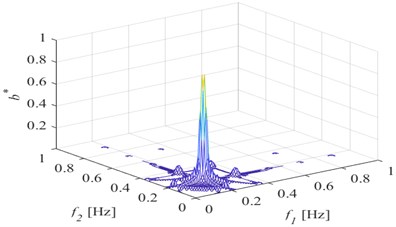 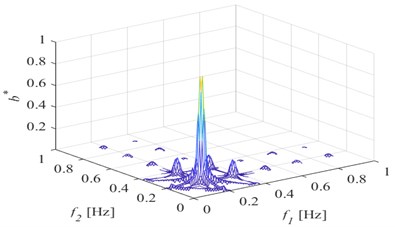 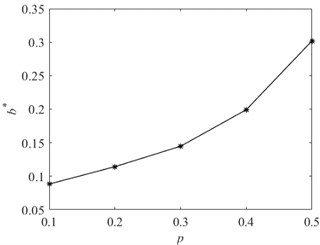 This work is supported by Anhui provincial international joint research center of data diagnosis and smart maintenance on bridge structures (No. 2021AHGHYB05), the University scientific research project of Anhui Provincial Department of Education (Nos. KJ2021A1097 and KJ2021A1098), the Key R&D Project of Anhui Science and Technology Department (202004b11020026), and Nanjing International Joint Research and Development Program (No. 202112003).