Copyright © 2022 Jie Hong, et al. This is an open access article distributed under the Creative Commons Attribution License, which permits unrestricted use, distribution, and reproduction in any medium, provided the original work is properly cited.

Dynamic model of bearing-rotor system is developed considering the collision effects between the cage and its guiding land. The modal characteristic and vibration response are studied with the fourth-order Runge-Kutta method. It is demonstrated that the cage whirling motion arising as a result of collision with the guiding land would induce abnormal frequency components in the system’s response including the multiple frequency as well as the modulation between the speed frequency and the natural frequency. Additionally, cage whirling motion and rotor vibration become severe when the rotor rotates around its pitching-mode critical speed. It is shown that the amplitudes of abnormal frequencies can be decreased by reducing rotor unbalance in a given range.

Rolling bearing is widely used in rotating machinery, and its performance directly affects the rotor dynamic response. Bearing cage is significant component to separate and guide elements. Cage whirling motion due to destructive collision force between the cage and rolling elements or race land can give rise to destruction of bearing structure and abnormal vibration of rotor system. Fig. 1 shows one typical case of bearing structure failure, and cage spin frequency modulated to rotor rotation frequency , producing sideband signals ±, which might generate great harm to the security of whole equipment. Therefore, it is critical to study the mechanism of cage whirling motion and its influence on the dynamic characteristic of bearing-rotor system.

a) Cage fracture and element wearing 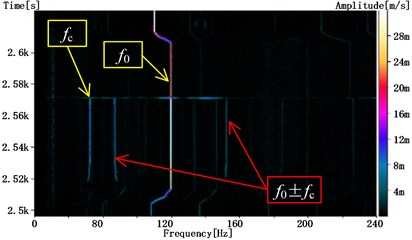 In the past decades, many researches have been conducted about the dynamic characteristic of bearing cage. Kingsbury [1] firstly put forward the mechanism that the amplitude of cage whirling motion would varies at a particular frequency because of element loading inequality and periodically changing sides within their pockets. Walters [2] numerically integrated the bearing motion equations with a fourth order Runge-Kutta scheme, and the results demonstrated that the cage whirling direction would be different as the cage guiding condition was changed. After that, abundant works have been done about dynamic modeling, parameters effects and motion stability of bearing cages [3]-[6]. However, the influence of rotor dynamic response on the cage motion are hardly considered. On the other hand, dynamic analysis of bearing-rotor system is the hotspot in rotating machinery engineering, but the scholars are mainly focused on the nonlinear stiffness and rotor instability caused by bearing clearance or varying compliance [7]-[9], ignoring the effect of cage motion or excitation. In recent years, some studies on the dynamic interaction between bearing cage and rotor system have been conducted. Chen [10] investigated the effects of rotor vibration on the cage dynamic performance. But the mechanism of cage whirling motion and its influence on the rotor dynamic remains unclear.

In this paper, a dynamic model for high-speed bearing-rotor system considering cage whirling motion and the cage collision with its guiding land is proposed. On the basis, the cage motion characteristic and the frequency components of the rotor response are studied in order to investigate the dynamic coupling effects between rotor and bearing cage.

The structure of typical bearing-rotor system supported by fulcrums is shown in Fig. 2. , , (1, 2) are respectively supporting stiffness, damping coefficient and distance to the centroid of two fulcrums. In order to simplify the question, only the effect the rear bearing is investigated, as shown in Fig. 3, and the interface of inner ring and rotor journal is considered totally bounded.

Fig. 3. Structural diagram of the rolling bearing at the rear fulcrum 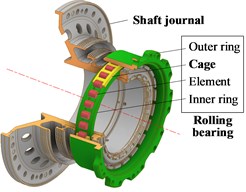 Assuming the rotor is rigid, the dynamic equations of the rotor system are written in Eq. (1):

where , , are respectively the rotor’s mass, polar and diameter moment of inertia; , are the rotor unbalance and its eccentricity, which is considered located at the rear half; is the distance between the centroid to the unbalance; is the angular velocity; , are bearing force components in and direction at the rear fulcrum.

Plenty of researches have been conducted to describe the bearing forces and in Eq. (1). Based on the bearing dynamic model developed in [11] and [12], this article further considers the effects of cage whirling motion and cage collision with its guiding land. The forces acting on cage are shown in Fig. 4, and the dynamic differential equations of cage are established as Eq. (2).

In Eq. (2), is the number of elements; is the mass of cage; represents moment inertias of cage on different directions; and are the skewing angular and position angles;, are respectively the contact forces between cage and element in normal and tangential directions; , are torques due to the cage skewing and the force maldistribution. , are respectively the lubricating oil resistances:

As shown in Fig. 5, there is an initial clearance () between the cage and its guiding land at static state, and the clearance varies () during the working process due to the skewing and procession motion of the cage and inner ring, which is expressed as Eq. (3):

where , are respectively the radius of cage and inner ring at the guiding area; is the half width of the guiding land in direction. , are the procession radius and skewing angle.

The collision between cage and inner ring occurs when . The normal and tangential component of the collision force respectively are:

where is the stiffness characteristic of the cage-land contact, and is the friction coefficient.

Fig. 4. Schematic diagram of the forces acting on the cage 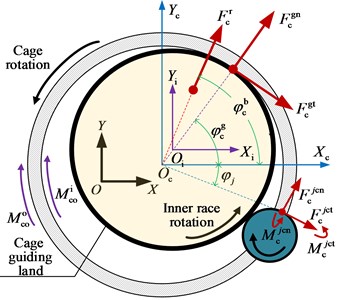 Fig. 5. Schematic diagram of the collision effect between the cage and its guiding land 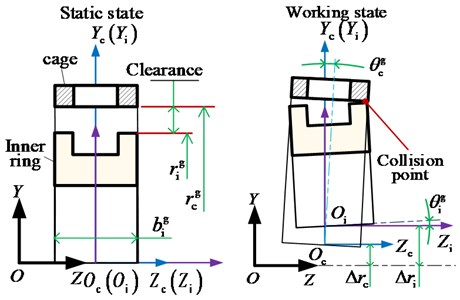 The dynamic model of the whole bearing-rotor system consists of the rotor model part (Eq. (1)) and the bearing model part, including the bearing forces model (Eq. (2)). These two parts are assembled with the equilibriums of the inner ring, which is fixed on and keeps the same displacement with the rotor shaft. The force balance equations for the inner ring are:

where , are respectively the normal and tangential force between the element and the outer raceway, and , are torques due to the element skewing and the force maldistribution.

2.3. Calculation procedure of the dynamic model

The basic steps of the calculation procedure for dynamic equations of the whole bearing-rotor system are listed as follow:

1) Input the structural parameters and working conditions (including rotation speed, preload) of the system, and start the quasi-static analysis with Newton-Raphson method to acquire the initial displacement/velocity state.

2) Calculate the interaction forces/toques on the basis of the dynamic models, and acquire the acceleration state of the whole system.

3 Conduct time integration calculation by the four order Runge-Kutta method. Reduce the time increment if the truncation error exceeds the allowance. Otherwise, update the displacement/velocity state for the next timestep until the time ending.

Based on the above dynamic model and calculation method, modal characteristics and dynamic response of the bearing-rotor system is analyzed considering the effect of cage whirling motion. The key parameters of the system are shown in Table 1.

3.2. Dynamic response of the bearing-rotor system

a) The first order, translational mode

b) The second order, pitching mode

Fig. 8. Dynamic responses of the bearing-rotor system under different speed

b) Frequency spectrums of the rear fulcrum load response

c) Center orbit of the cage

The results show that the rotor rotates under the translational mode shape at 2 krpm and 5 krpm, and rotating speed frequency is the only component in the spectrums of fulcrum load response. The cage center orbits are both circular with a similar radius. However, the load response of the rear fulcrum is higher at the 5 krpm as the rotor system is near to the resonance range.

The pitching mode shape of the rotor system is observed at the speed of 10 krpm and 20 krpm, and the frequency components are much more complicate, including the rotor rotatory speed , the cage rotatory speed , and their multiple frequencies , , , … and the modulation frequencies, for example, , and so on. The cage center orbits no longer keep circular, and there are severe collisions between the cage and its guiding land, leading to the cage whirling motion. The results exhibit the coupling effects between the rotor and the bearing cage when the rotor is rotating under the pitching mode.

3.3. Effects of the rotor unbalance on the dynamic response

Additional conditions of different rotor unbalance (20 g, 200 g) are considered and the dynamic responses of the bearing-rotor system are analyzed, as shown in Fig. 9. The rotor pitching angle and the rear fulcrum load response both increase when adding the rotor unbalance. However, the amplitudes at the modulation frequencies are found to be lower than the 100 g unbalance condition. When the rotor unbalance is 20 g, the response of whole system is at a lower level, and the collision of the cage is weaker. When it comes to the 200 g condition, rotor’s centrifugal effect is too strong, and the cage is forced to whirling on the rotor’s orbit, which also leading to the reduction of the cage collision effect and the components of modulation frequencies in the response signal.

Fig. 9. Effects of the rotor unbalance on the dynamic response of the system

Through the analysis, the conclusions can be drawn as follow:

1) The influence of the cage whirling motion should be considered during the dynamic response analysis of the bearing-rotor system, which can cause abnormal vibration of the rotor system, inducing the multiple frequencies and modulation frequencies components in the system response.

2) The cage whirling motion is more easily induced when the rotor rotates around its pitching mode critical speed, as the skewing of the shaft and the inner ring exacerbates the collision between the cage and its guiding land.

3) The abnormal vibration of the bearing-rotor system can be suppressed by controlling the rotor unbalance, which essentially decreases the shaft pitching angle and the cage-guiding land collision effects.