Copyright © 2022 Miguel Francisco Javier Lloret Rivas, et al. This is an open access article distributed under the Creative Commons Attribution License, which permits unrestricted use, distribution, and reproduction in any medium, provided the original work is properly cited.

Worldwide, obesity leads to major diseases in adults. Infants are affected as well, particularly because of growth and development issues. In this article we describe cases of early dental eruption in overweight and obese children, almost 1 year earlier than expected. The relations and mechanisms that cause these alterations remain to be determined. 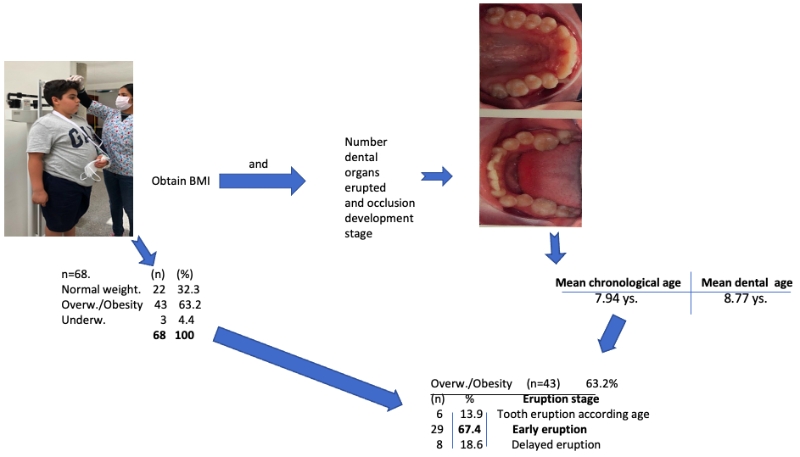 Dental eruption is a very complex process because it is influenced by multiple factors that determine the movement of the teeth from the place in which they develop all the way through the alveolar process at the end of which they adopt a functional position within the oral cavity. Dental eruption is a biological event which takes place in a genetically determined sequential and ordered manner, but which can be influenced by diverse factors [1, 2]. The prevalence of excess weight and obesity among children in Mexico is a grave health and public policy problem which has doubled between 1996 and 2016. According to the “Encuesta Nacional de Salud y Nutrición de Medio Camino” (National Mid-Way Health and Nutrition Survey), 33.2 % of school children are overweight or obese [3]. Children suffering from obesity have a higher risk of developing Mellitus type-2 Diabetes, insulin resistance, cardiopathies, arterial hypertension, and obstructive sleep apnea [4]. The causes that lead to the acceleration of the process of dental eruption are still unknown, although some factors, such as morphological changes in the adipocytes, an excess production of IGF 1, or alterations in the metabolism of calcium, among others, are often mentioned [5, 6]. When a premature dental eruption occurs, there exists the risk of dental complications such as malocclusion, periodontal disease, or cavities, also the eruption corridors may be affected, which has consequences like dental crowding, dental retention or impaction, and malocclusion [7, 8]. There are very few studies that relate child obesity with premature dental eruption and, due to their importance, the current article will describe their prevalence in a given infantile population based on BMI and percentile group, on the chronological stages of dental eruption, and on the phases of dental eruption.

To describe the Prevalence of early dental eruption in children suffering from excess weight and obesity.

Observational, descriptive cross-sectional study of a sample of Queretaro’s (Mexico) infantile population. Sample with 68 (31 girls and 37 boys). To obtain the Body-Mass Index (BMI), all subjects were weighed and measured by the same researcher, using an OMRON ® weighing machine. Once the BMI was calculated, a percentile tier was assigned to each of the subjects. A clinical inspection was carried out to determine the number of dental organs that had erupted, and, based on the occlusion development stage established by Simões [9], and using panoramic x-rays to determine the stage of dental eruption of the subjects, a dental age for each subject was determined. Intra-oral photographs were also taken to help evaluate the number of erupted teeth and the phase of the eruption.

Table 1. Eruption stages according to age

Table 2. Distribution of subjects according to BMI

When excess body-weight or obesity are present, so is, to a greater or lesser extent, early dental eruption. Our results coincide with those of Sánchez-Pérez [10] in which overweight children have a higher number of erupted teeth.

Growth and development, in the same way as dental eruption, are influenced by a wide variety of genetic and environmental factors. Dental eruption and the order in which teeth emerge are, in turn, affected by factors such as a subject’s height and weight, which may produce a premature or delayed eruption sequence. We agree with the findings of Ayala, Carralero and Leyva [11], in so far as there are very few studies in which the chronology of dental eruption and patients’ BMI are correlated. In the aforementioned study, the authors pointed out a relation between delayed dental eruption and malnourishment, which is also stated in the work of Vaillard, Jimenez et al. in 2015 [12]. In this study, the authors analyzed a population sample of 1172 schoolchildren from different municipalities from the Puebla Valley, in Mexico. The authors found a significant correlation between malnourishment and delayed dental eruption, as well as alterations in the dental eruption sequence of the malnourished minors. Even when in the current study only 4.4% (3) of the subjects suffered from low body weight, our findings coincide with those of the two aforementioned studies, since all three of the underweight subjects suffered from alterations during the stages of dental eruption. It must be said, though, that two of the three underweight children presented premature dental eruption and only one of them presented a delayed dental eruption (see Table 2). We consider it to be of great importance to further study these topics and conduct more in-depth studies which may allow us to better understand the relationship between BMI and dental eruption. Khalifa et al. evaluated gestational age, bodyweight, and neonatal disease until the moment of the eruption of the first tooth. They found that delayed first dental eruption was related to low body-weight at birth and premature birth [13]. A diet rich in fats was shown to favor the induction of the osteoclast genesis, and the manifestation of the inflammatory genes present in the alveolar bone of animals [14]. This is of great importance, not only for the correct development of the alveolar bone, but also during orthopedic orthodontics treatments, through which a professional attempts to modify the position, the size, and/or the shape of teeth. On the other hand, protein malnutrition alters insulin receptors, and, therefore, causes inadequate mandibular development [15]. In the present study, it was impossible to evaluate the malnourished segment of the population sample, due to the small number of children that fell into this category based on BMI. As to overweight or obese subjects, a high percentage of our population sample fell within this category. The percentage of overweight or obese individuals in our study was higher than that reported by the WHO (see Table 2). This must attract the attention of healthcare professionals because, on top of it being a public health problem, it leads to other issues such as alterations in dental eruption. The exact relation between overweight or obese subjects, and premature eruption of permanent teeth remains unclear. Nonetheless, in the current study a high percentage of overweight or obese children (67.19 %) presented an earlier eruption of permanent teeth than what would normally correspond to their age-group. In a study conducted on a population of Chinese children of age 12, the researchers sought to find a correlation between the number of erupted permanent teeth and obesity. The researchers concluded that the number of erupted permanent teeth does relate to obesity when compared to children of the same age with normal BMI [7]. This also coincides with the findings of the current study (see Table 2), and with other studies, such as the one conducted by Must et al. [16], in which the relation between obesity and the number of erupted permanent teeth was also analyzed. The researchers found that obese children have, on average, 1.44 more erupted permanent teeth than non-obese children. In this study, the chronological age of each subject was analyzed according to the different eruption stages of each permanent tooth and taking into account whether deciduous teeth that corresponded to the subject’s age were still present. Without a doubt, the presence of permanent teeth at an earlier stage than their natural or organic one, causes developmental alterations because, once the dental eruption stage has been altered, teeth are more likely to suffer from cavities and malocclusion. Additionally, the time necessary for the physiological eruption of the teeth to conclude, and the time for the growth of the maxillaries to be stimulated is reduced to perform preventive interception and correction. It has also been clearly established that the sequence of dental eruption depends on gender, geographical origin, genetics, and a variety of factors such as nutrition. Among children who go to public schools in the Brazilian Amazon, a correlation between dental eruption stages and excess body-weight or obesity was also established. Researchers found a greater number of erupted teeth among obese or overweight subjects [17]. In a more recent study aimed at establishing relations between body-weight and dental eruption conducted on a population of 519 children of age 6, the researchers concluded that there is a correlation between excess body-weight or obesity, and dental eruption. Additionally, the researchers suggested that, in obese subjects, the probability of encountering premature incisors and permanent inferior first molars, is doubled. A significant correlation between body-weight at birth and primary dental eruption was also reported [18].

All the aforementioned results from different authors may strengthen the hypothesis of a correlation between excess body-weight or obesity with the chronology of the eruption of permanent teeth. The same doesn’t occur with regards to dental formation; this means there is too-small a measurable effect of a subject’s nutritional state on the formation of teeth, which is considered a biologically stable process, unaffected by nutritional circumstances [19]. Also, in a recent study on a population of 725 pediatric patients aged between 4 and 14, no alterations to the eruption sequence of permanent teeth, nor influence on the teeth present was found. In this study the researchers concluded that bodyweight, height, age, and BMI act as significant predictors of dental eruption symmetry [20]. It is well known that factors such as deficient mastication, diet, and hormonal factors, among others, influence dental eruption; the correlation of said factors to dental eruption is yet to be determined. More studies on dental eruption in children with excess weight or obesity are required.