Copyright © 2022 Zhu Jin, et al. This is an open access article distributed under the Creative Commons Attribution License, which permits unrestricted use, distribution, and reproduction in any medium, provided the original work is properly cited. 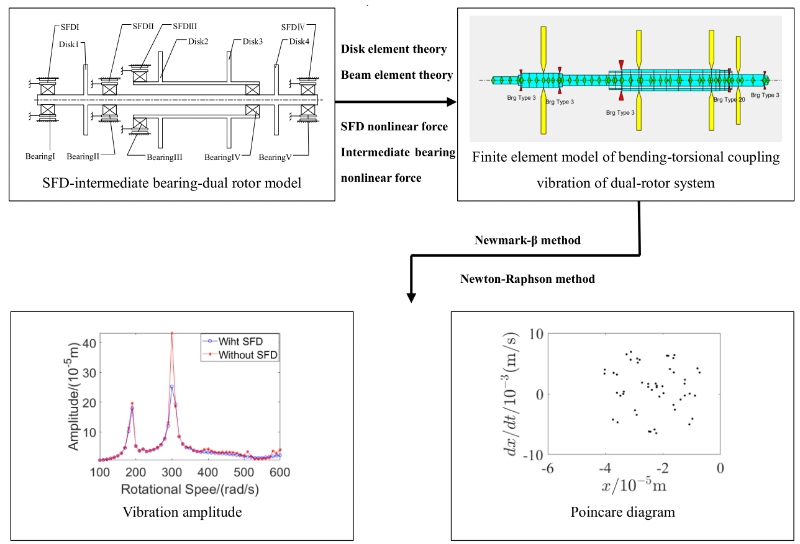 Jawaid I. Inayat-Hussain investigated the effect of various design parameters on the bifurcation response of an elastic rotor supported and an SFD containing cage support. The results show that the onset rotational speed of the bifurcation increases with the increase of stiffness ratio and decreases with the increase of mass ratio [1]. S. Dănăilă and L. Moraru discussed the classical theory of hydraulic lubrication in SFD research, pointing out its limitations. It is pointed out that the oil film in the SFD is only directly affected by the precession and nutation of the rotor, but in the classical theory, the flow in the thin film is also governed by the Reynolds equation [2]. Shan et al. established a rotor experimenter with SFD, and studied the vibration reduction characteristics of SFD to the vibration caused by rubbing and misalignment faults by means of experiments [3]. Wang Jun et al. studied the control of the chaotic motion of the failed rotor system by establishing the SFD-rotor- rolling ball bearing system dynamics model under the misalignment-touch-friction coupling [4]. Hamidreza Heidari and Mohammadreza Ashkooh studied the stability and bifurcation properties of SFD-rotor systems. The results show that the unsymmetrical stiffness of squeeze film dampers in the presence of cavitation promoting the chance of undesirable nonsynchronous vibrations [5]. LIU Yang et al. analyzed the damping performance of SFD in rotor system from the theoretical point of view, and the results show that SFD can reduce the vibration amount of rotor at certain speed range, and the damping effect is not good at relatively low speed [6]. Shin D. et al. established an SFD model considering fluid inertia factors and cavitation effects, and applied it to the rotor model based on Euler beams. The simulation results show that SFD suppresses the vibration caused by the Morton effect [7]. Vincent Iacobellis et al. studied the effect of squeeze film clearance and oil inlet configuration on the unbalanced response of Jeffcott rotor by experiments. The results show increased damping with smaller clearance and increased number of oil inlets, while the number and orientation of oil inlets also show an effect on the level of air ingestion into the SFD and some asymmetry in the rotor response [8]. Based on Reynolds boundary conditions, Xu Weiwen et al. derived the oil film force characterization equation of the squeeze film damper under static eccentricity condition and analyzed the effect of static eccentricity on the vibration damping characteristics of the squeeze film damper [9]. Wang Haifei established a rotor system with the fit looseness fault and studied the vibration reduction effect of squeeze film damper on the rotor system with the fit looseness fault. The results showed that the squeeze film damper can reduce nonlinear vibration responses effectively generated by the fit looseness fault for the nonlinear contact [10].

In this paper, the differential equations of motion containing local nonlinearity for the SFD-intermediate bearing-dual rotor system are derived using the Lagrange equation and the finite element method. And they are solved using a numerical integration method combining the Newmark- method and the Newton-Raphson method to analyze the effect of SFD on the bending-torsion coupling vibration characteristics of the dual-rotor system.

By using Lagrange equation, the motion differential equation of the 5-DOF integral eccentric disc element can be obtained:

where , , and are the mass, eccentricity, diameter rotational inertia and polar rotational inertia of the disk. is the displacements of generalized degrees of freedom for the disk. is the rotor speed, and is the initial phase angle. , , and are the inertia matrix, damping matrix, gyroscopic matrix and stiffness matrix of the 5-DOF disk with eccentric mass, respectively, and is the unbalance force caused by the eccentric mass. From the matrices of , and , it can be found that there is a coupling term between the bending direction and torsion direction of the disk, and the coupling term is a function of . It can be concluded that the mass eccentricity of the disk can induce the bending-torsion coupling vibration.

The nonlinear oil film force of SFD can be derived using the short bearing assumption and Reynolds boundary conditions, and the components of the oil film nonlinear force in the and directions are as follows:

The rotor uses a 5-DOF Timoshenko beam element considering shear deformation and rotational inertia, and the intermediary bearing model uses a nonlinear force model of the bearing from the literature [11]. Using finite element theory, the mass matrix, damping matrix, gyroscopic matrix and stiffness matrix of the disk and beam units are assembled to obtain the differential equations of motion for the SFD- intermediary bearing- dual rotor system as follows:

In this paper, we compare the bending-torsional coupling vibration characteristics of the dual-rotor system with and without SFD for the inner rotor disk 4 and the outer rotor disk 3. 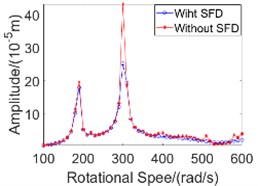 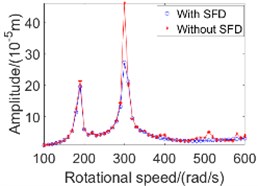 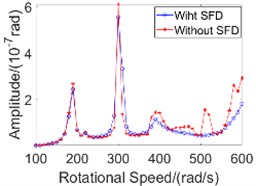 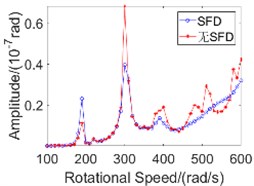 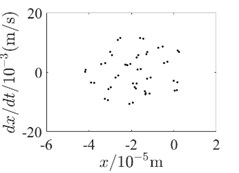 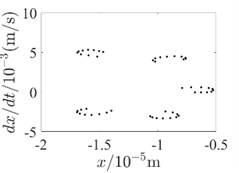 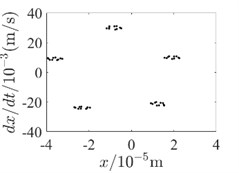 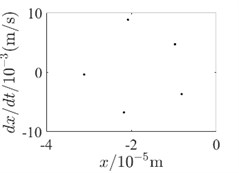 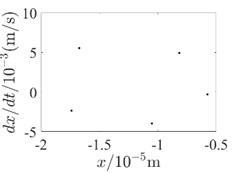 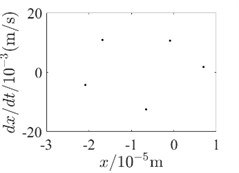 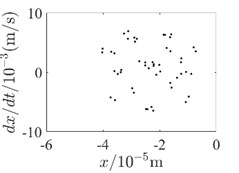 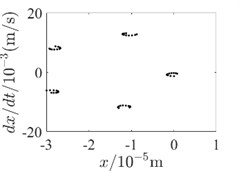 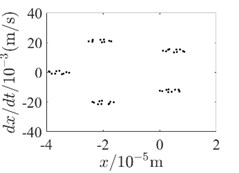 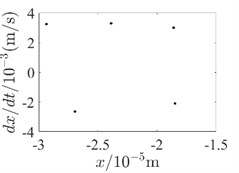 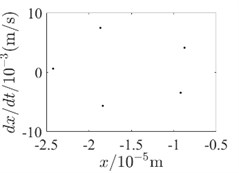 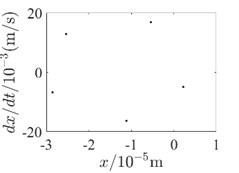