Copyright © 2022 Dahe Qi, et al. This is an open access article distributed under the Creative Commons Attribution License, which permits unrestricted use, distribution, and reproduction in any medium, provided the original work is properly cited.

To study the wetting of a silty clay subgrade in an expressway, many laboratory tests were carried out. The test results show that the creep deformation of silty clay under water immersion cannot be ignored, but it is different from the deformation caused by wetting. The creep properties of soil mass are affected by many factors. Under different stress conditions, the soil mass will show different properties. In order to study the creep characteristics of silty clay in Chongqing under water wetting and different stress levels, a series of triaxial water wetting creep tests were carried out. The Singh-Mitchell creep equation was introduced to establish the creep model of silty clay drainage in Chongqing, and the parameters of the model were discussed.

Silty clay is widely distributed all over the world, also distributed in Chongqing. There are many riverside roads in Chongqing area, and the bearing layer under the subgrade is silty clay. The riverside roads subgrade along the river was wetted by the water all years round, soil particles were rearranged and adjusted under the water, resulting in additional deformation and additional settlement of subgrade, thus causing deformation and cracking of pavement and even instability and failure of embankment slopes along the river, the long-term stability of the road’s subgrade was affected. When the author conducted the water wetting test on the silty clay as the bearing layer under the subgrade [1], [2] found that the water wetting deformation test lasted for a long time, reaching 100 hours or even longer, so the creep deformation with time cannot be ignored.

This paper takes the silty clay widely distributed in Chongqing area as the research object. Through triaxial drained shear creep tests under different stress levels, it focuses on demonstrating the creep characteristics of silty clay after wetting in water, and discusses its corresponding suitable model, so as to understand its deformation mechanism in depth.

The silty clay soil samples used in the test were taken from the undisturbed silty clay samples within 3.5-6 m below the subgrade of a highway along the Jialing River in Chongqing, that were quaternary Holocene alluvium silty clay (q4al), basic physical properties see Table 1.

The test in this paper was carried out at 22±2℃, and the creep test was carried out by means of graded loading. The confining pressures are: 100 kPa, 200 kPa and 300 kPa, the stress level , respectively 0.2, 0.35, 0.5, 0.75. The silty clay soil sample was fixed with hoops and splints, placed on filter paper and permeable stone, add axial pressure and confining pressure. when the total axial stress reaches 0.2 of the total stress at the time of drainage shear failure, that is, when the stress level is 0.2, stop pressurizing and maintain the pressure unchanged, the sample starts to saturate from bottom to top, meanwhile the wetting creep test data was recorded.

According to the author’s previous test results [1], The axial failure stress of silty clay under various confining pressures is 240 kPa, 430 kPa and 620 kPa respectively. The test process is as follows:

(1) Install the sample and apply confining pressure to consolidate the sample;

(2) Take the readings measured after consolidation as the initial readings of the triaxial creep test, and then apply the vertical axial stress ;

(3) After the incremental load is applied, observe the change process of axial direction deformation with time, and record the creep deformation data;

(4) When the deformation is stable, apply the next level of load.

The creep stress-strain curve of the creep test is shown in Fig. 1, the curve is processed by Chen’s method [8]. Under the same confining pressure, the silty clay creep deformation amplitude at low stress level is small, the stress-strain curve is almost a straight line. At higher stress level, the strain gradually increases with time, and the creep deformation also increases. 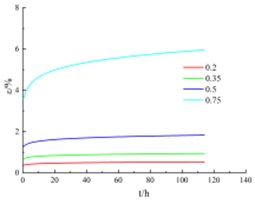 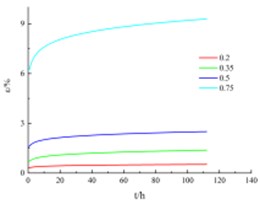 The test results show that, from the beginning of loading, the stress-strain isochrone curve shows obvious nonlinear characteristics, and its nonlinear degree is related to creep time and stress level. The higher the stress level is, the more obvious the axial bending toward the strain axis, the longer the creep time, the higher the nonlinear extent. 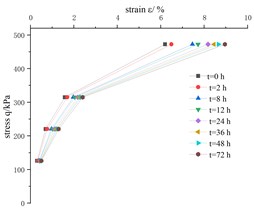 At present, there are three ways to describe the creep characteristics of rock and soil: theoretical model based on model theory, empirical model based on test results and micro model derived from micro rheology. The former two approaches are most widely used.

A. Singh and J.K. Mittechell [9] proposed the classical Singh-Mitchell creep model on the basis of summarizing the single-stage constant stress loading, drained and undrained triaxial compression test data, and proposed that the stress-strain relationship can be expressed by an exponential relationship and the strain time relationship can be expressed by a power function, which is a three parameters model used to describe the deviator stress level within 20 %-80 %, and can well reflect the creep characteristics of soil. The equation of Singh Mitchell creep model is as follows:

where, , , , – absolute value of the slope of the straight line in the relation curve of .

When , the Eq. (2) can be expressed as exponential stress-strain relation:

Take the logarithm on both sides: 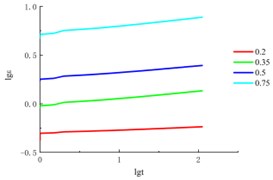 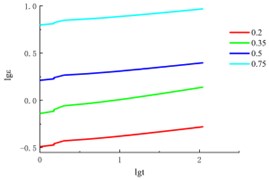 Based on the above formulas and creep test results, can be directly obtained from the relationship curve of soil samples at different times, is the slope of the model parameter straight line is related to the deviator stress , which can be taken as the average value when the difference is not large, calculation results see in Table 2. Collating the creep data, draw the curve, as shown in the Fig. 3. 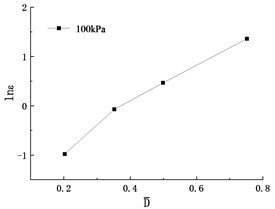 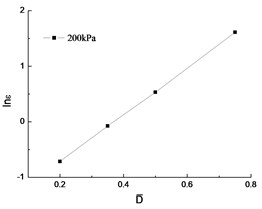 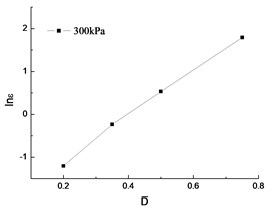 Parameter , can be directly obtained from the relationship curve of in Fig. 4, the linear relationship is relatively good. Table 3 shows the calculation results.

The Singh Mitchell model equation of the creep stress-strain curve of silty clay is:

This model can well describe the creep stress-strain curve of silty clay. The larger the stress level, the worse the data consistency. If the stress level exceeds 0.8, there will be a large deviation, the Singh-Mitchell model is not suitable for describing the creep curve.

In this paper, the triaxial creep wetting test was successfully carried out, and the creep deformation characteristics were revealed.

1) The silty clay of road subgrade along the Jialing River in Chongqing has obvious creep characteristics.

2) Use the graded loading method, obtained sufficient creep test data, which provides a basis for testing the accuracy of the creep model.

3) Introduced the Singh-Mitchell model to describe the creep stress-strain curve, calculated the parameters of silty clay.

Our research was supported by the Science and Technology Research Program of Chongqing Municipal Education Commission (Grant No. KJQN202202503). More in-depth research will be conducted in the future.