Copyright © 2022 Lei Feng, et al. This is an open access article distributed under the Creative Commons Attribution License, which permits unrestricted use, distribution, and reproduction in any medium, provided the original work is properly cited.

Based on the shield tunnel construction of the left line of Guowei road station-Qingshan lake west station of Nanchang metro line 3, the study focuses on the adverse effects of tunnel segment convergence and settlement deformation of vault and arch bottom on shield construction in the process of shield tunnel construction in water-rich complex stratum. The time-space curves of segment convergence and settlement value on typical monitoring sections are drawn, their variation laws are analyzed, and the deformation values of monitoring data are analyzed and tested. Based on the analysis results, the qualitative and quantitative evaluation of the overall or local deformation state of each monitoring object of tunnel segment is carried out. The results show that the cumulative deformation of each typical monitoring section is lower than the warning value, and the tunnel segment has a systematic offset in the horizontal and vertical directions of the clearance.

During the tunneling process of the shield machine, it is also easy to encounter complex stratum and poor geological conditions. The underground water level is high, the water content is large, the strength is low, the stratum is sensitive, and the precipitation settlement is large in the water-rich complex stratum, which causes the shield to cross this kind of soil layer to easily cause the foundation settlement and increase the construction difficulty. Shen Xiang et al. [1] analyzed the tunneling parameter control technology and its variation law of shield tunneling under complex stratum conditions based on a tunnel project under complex geological conditions in Dalian. Liu [2] used mortar backfilling method to solve the construction problem of shield tunnel directly crossing the middle air shaft in a water-rich complex stratum in Changsha. Based on the engineering background of Shenzhen metro line 5, Li et al. [3] analyzed the mechanism of surface subsidence caused by tunneling shield construction in water-rich complex stratum through field monitoring and mathematical statistics.

The shield section of Guowei road station-Qingshan lake west station is located in the Qingshan lake area, and the section is west-east oriented. The line tunnel buried depth of 15-20 m, left and right double line, and the length is about 1.88 km. Shield tunnel excavation area is mainly gravel sand and round gravel layer, local area is coarse sand and fine sand layer. Engineering geological environment is basically sandy soil, so the shield technology has been used to excavate left and right line tunnel. The excavation of the left tunnel lasted 12 months. In this process, the corresponding tunnel monitoring data are analyzed, and the causes of tunnel segment convergence and vault and arch bottom settlement deformation and their adverse effects on shield construction are introduced in the process of shield construction in water-rich complex stratum. Tunnel segment convergence and settlement monitoring points are set up every 8 rings and the relative height difference between each monitoring point and the nearby reference point is observed using precision length measuring instruments, as shown in Fig. 1. 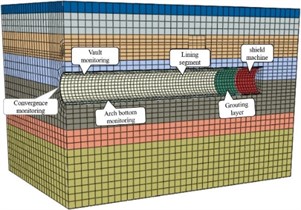 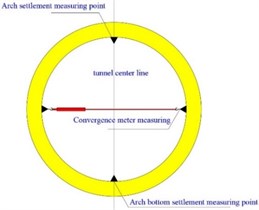 From Table 2 and Fig. 2, the clearance convergence cumulative change of the measurement points of each segment section is different. Most of the segments at the monitoring section are squeezed by the surrounding soil, and the convergence deformation of the horizontal inward contraction occurs in the direction of the clearance. A small part of the section deformation is horizontal outward expansion. The point with the largest cumulative change is GGJ928, and the cumulative displacement is 2.41 mm within the safe and controllable range. 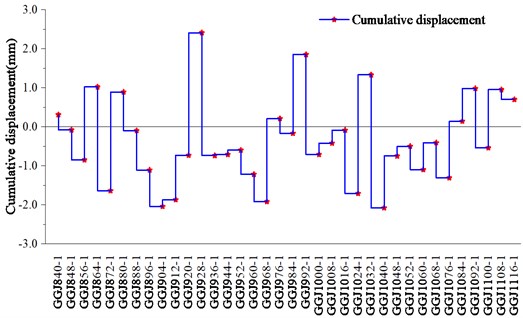 Table 3 shows the convergence deformation values on each typical monitoring section. The statistical analysis software SPSS is used to test the normality of the engineering data in the table to determine whether the convergence data obeys the normal distribution [9, 10]. The test results are shown in Table 3.

Table 3 uses Kolmogorov-Smirnov and Shapiro-Wilk methods to test the data. The results show that the significance values of both are greater than 0.05, indicating that the monitored data conform to the normal distribution.

1) Hypothesis: specify the specific test content of the null hypothesis ;

2) Determine the test statistic: select the corresponding statistic according to the hypothesis content;

The rejection region of positive and negative error signs number test is:

The rejection region of positive and negative error allocation order test is:

The rejection region of error value and test is:

The rejection region of the maximum error value test is:

4) Make a judgment: if the critical value meets the range of the rejection region, reject ; Otherwise, accept and pass the test.

(2) The estimated standard deviation of convergence value was calculated by statistical theory ±1.10 mm, and the significance level 0.0455 was used to test the following error characteristics of convergence monitoring data.

3) The sum of error values test.

Proposing the null hypothesis : The critical value of limit error is ±2.2 mm; The maximum closure difference in all monitoring values is 2.41 mm, then , that is, the error value at the GGJ928-1 monitoring point is abnormal, is rejected, which does not conform to the boundedness of accidental errors.

Through the above error characteristics test, it can be seen that the convergence value data does not satisfy the symmetry and boundedness of accidental errors, and there are two rejection terms. Firstly, the number of positive and negative error signs is tested and is rejected, indicating that the probability of positive and negative errors with equal absolute values is different. It is considered that these deformation values have systematic tendency characteristics.

Through the normality test and error characteristic test, the convergence value data obeys the normal distribution, and does not conform to the characteristics of accidental error. It is considered that the tunnel segment has a systematic tendency in the direction of clearance convergence, and there is a relative dynamic deformation with an offset of –0.35 mm horizontally inward extrusion.

From Table 4 and Fig. 3, It can be seen that the change rate of the cumulative settlement of the whole vault fluctuates greatly, and in the process of shield construction, the segments at most monitoring sections have vertical upward displacement deformation in the vertical direction, resulting in floating phenomenon, and the segment vault at a few sections has normal settlement. The point with the largest cumulative change is GGC1000, and the cumulative displacement is 3.10 mm, which does not reach the warning value.

From Table 5 and Fig. 4, it can be seen that except for the large fluctuation of individual monitoring point data caused by construction, the overall change rate of the settlement curve of the arch bottom is relatively gentle. Most of the segments on the monitoring section are in normal settlement, and only a few sections have a certain uplift at the bottom of the tunnel segment. Among them, the point with the largest cumulative change is GDC864, with a cumulative displacement of –3.96 mm, which does not reach the warning value.

Through the normality and error characteristics of the settlement values at the top and bottom of the arch, it can be seen that the settlement data obeys a normal distribution and does not satisfy the requirements of symmetry, boundedness and compensation for chance errors. Both the top and bottom of the arch have a rigid absolute deflection with offsets of +0.64 mm and –0.45 mm respectively. 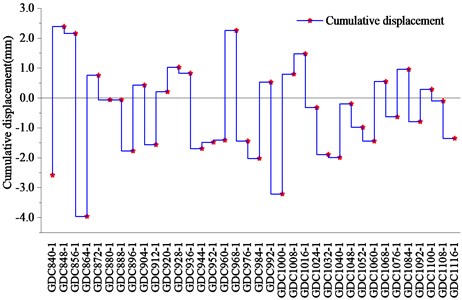 5.3. Comprehensive evaluation of the project