Copyright © 2022 Zhijian Wang, et al. This is an open access article distributed under the Creative Commons Attribution License, which permits unrestricted use, distribution, and reproduction in any medium, provided the original work is properly cited. 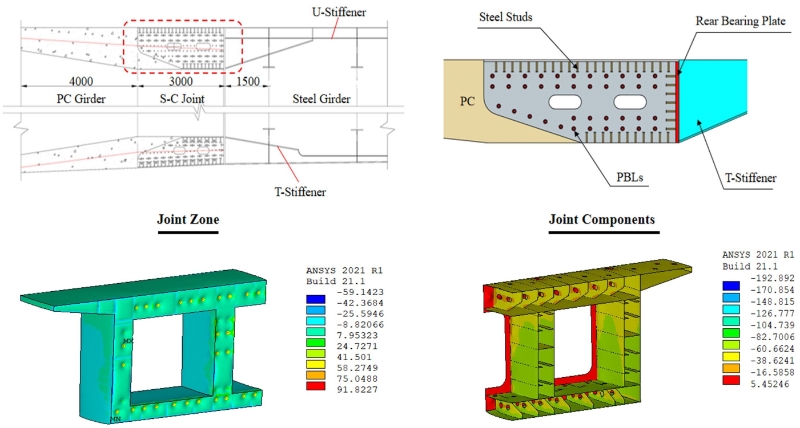 Steel-concrete hybrid girders, using steel and prestressed concrete (PC) girders along the longitudinal bridge direction, are very competitive in designing large-span bridges. Particularly, the use of a steel girder in the middle span can significantly increase the maximum span and minimize the number of piers, while the adoption of a PC girder in the side span can effectively anchor the long middle span and improve bridge stiffness [1]. To achieve these merits, the design and detailing of steel-concrete joints between the steel and concrete girders become critical. The ideal steel-concrete joint for a hybrid girder should smoothly transfer internal force and stiffness and has high strength, good durability, and good fatigue resistance. In practice, steel-concrete joints of concrete-filled steel cells with bearing plates and mechanic connectors are widely used in recently constructed hybrid girder bridges. According to the arrangement of bearing plates, the joint can be classified as the joint with the front bearing plate, the one with the rear bearing plate, and the one with double bearing plates. Along with the shearing effect provided by the mechanic connectors, the local direct contact effect between bearing plates and concrete infill transfers forces between the PC and steel girders.

As mentioned earlier, steel-concrete joints play vital roles in dispersing internal forces from PC girders to steel girders. However, due to the evitable occurrence of concrete shrinkage and creep inside steel cells, the load transferred at the joint part would vary with the servicing period. Existing studies seldom focus on the load transition in steel-concrete joints after the bridge has been operating for a long time. To explore possible unsafe stress variation caused by shrinkage and creep of concrete, it is particularly interesting to examine the long-term performance of steel-concrete joints of hybrid girder bridges.

The hybrid girder bridge under construction is located in Guangdong province, China. Fig. 1 shows the main configurations of the background bridge, together with the details of the steel-concrete joint segment. The hybrid girder in the prototype bridge consists of the steel girder at the midspan, two steel-concrete joints, and two PC girders at the side spans. The steel-concrete joint was composed of several concrete-filled steel cells accompanied by rear bearing plates and shear connectors, and the steel cells were filled with C55 concrete. As can be seen in Fig. 1, the joint segment is equipped with rear bearing plates, performed rib (PBL) connectors, and headed studs.

Fig. 1. Schematics of the prototype bridge

The expressions for shrinkage strain of concrete are expressed as:

The expressions for the creep coefficient of concrete are expressed as follows:

Combining the above expressions, the cooling method is used to simulate the shrinkage effect, and the creep criterion is adopted to analyze the creep effect.

Fig. 2 presents the established FE solid model. As can be seen, the supporting effect of the T-stiffeners in the steel girder is simulated by simplified line constraints. Full restraint is applied to the rear bearing plate and the contacted concrete surface. The nodes at the ends of the shear connectors (e.g., steel studs and PBL connectors) are coupled to the concrete and steel girder, respectively. Symmetric boundary conditions are imposed at the axis of symmetry of the joint.

A system calculation of the bridge using the Midas Civil computer agency was performed to determine the most critical load combination for the joint. The calculation results of loads under the most critical combination are summarized in Table 2. It is observed that the shear force at the joint zone is minuscule and could be neglected as compared with the other forces, while the axial and bending forces are comparatively large and should be considered for the model. Accordingly, only axial and bending loads (2.0P) were applied to the model. 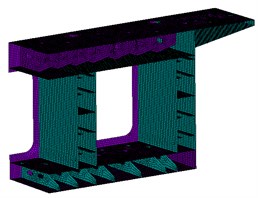 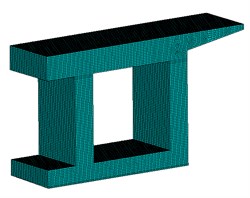 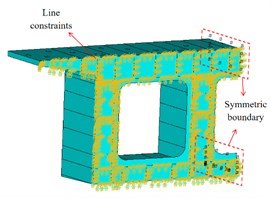 Table 2. Design Loads of the steel-concrete joint under the most critical load combination 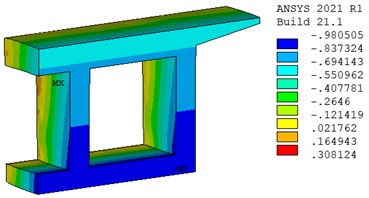 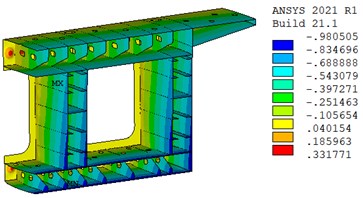 Fig. 4(a) and (b) show the stress distribution of the steel-concrete joint after one year under the action of 2.0P. It can be seen that in addition to the stress concentration at the local position around the prestressed tendons, the compressive stress of the concrete is about 8.8 MPa, and the maximum stress of the steel beam is 192.8 MPa, which is far less than the ultimate strength of the material. In addition, the stress distribution in steel girder and concrete infill also shows that the stress level of the bottom plate is higher than that of the top plate, which is in good agreement with the characteristics of displacement distribution. 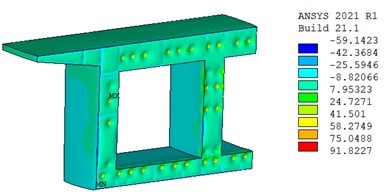 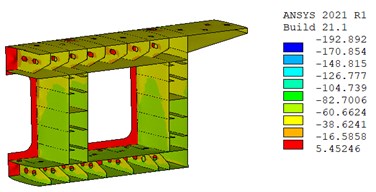 Fig. 4(c) and (d) show the stress distribution in perforated webs. It is clear that the compressive stress is mainly distributed on the perforated webs, and the compressive stress level of the perforated webs at the bottom slab is higher than that at the top slab. Due to the minimal slip between the steel girder and concrete infill, no obvious stress concentration has been observed around the shear connectors (e.g., head studs and PBL connectors), while it has been observed on the long side of the grouted holes. Accordingly, the low-stress level demonstrates that the steel-concrete joint is serving in the elastic stage and still has a large safety margin.

1) The displacement distribution from the FE solid model indicates that little slip occurred between the steel girder and concrete infill. The stress distribution indicated the steel-concrete joint was working in its elastic behaving stage despite maintaining the load level of 2.0P for a year.

2) Minimal vertical displacement observed from the experiment demonstrates good bending stiffness of the steel-concrete joint in connecting the PC and steel girders. The load in steel bolts and the stress in concrete infill had slightly declined due to concrete’s shrinkage and creep effects and the relaxation of steel bolts in the long-term monitoring period.

The authors express their sincere gratitude for the financial support provided by the Science and Technology Project of Guangzhou, China (Grant No. 202102020652).