On a three-dimensional neural network model

Copyright © 2022 Diana Ogorelova, et al. This is an open access article distributed under the Creative Commons Attribution License, which permits unrestricted use, distribution, and reproduction in any medium, provided the original work is properly cited.

The theory of neural networks appeared as an attempt to understand the structure and principles of the functioning of the human brain. Now it is rich in results and practically significant field of research in natural sciences. Artificial neural networks (ANN) can be understood as computing systems inspired by biological neural networks. Their mathematical models can be formulated in terms of systems of quasi-linear differential equations of the form Eq. (1). Each dependent variable is associated with a neuron. It accepts signals from other neurons (this is called input) and elaborates its own signal (it is called output) which is sent to a network. The nonlinearity is called the response function, or activation function. Usually, a sigmoidal function like or is used. Recent attempts to introduce other response functions may be found in [6]-[9]. The system:

Appears in neurodynamics [1], [2]. It is of general nature, and for appropriate choice of parameters and it may have rich dynamics. Moreover, for sufficiently large it can approximate (on a finite interval) any dynamical system [3]. The dynamics of solutions is a valuable object of investigation. Especially future states of a modeled neural networks are important to know. For this, the analysis of the phase space is needed. Future states are heavily dependent on attractors of the system, [4], [5]. In this note we will show that the three-dimensional system of the form Eq. (1) can have stable equilibria in the form of stable focuses. For the appropriate choice of parameters, it can have limit cycles attracting other solutions.

Proposition 1. System Eq. (2) can have stable critical points of the type stable focus.

Fig. 1. Stable focus as in Proposition 1 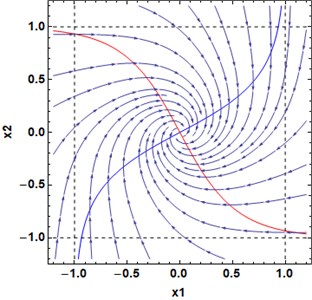 Fig. 2. Limit cycle as in Proposition 2 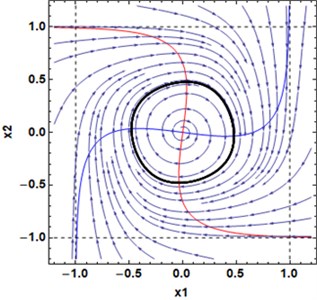 Consider the three-dimensional system of the form Eq. (1):

Proof by construction the example. Let the coefficient matrix in Eq. (3) be:

The nullclines for the system Eq. (3) are given by the relations: 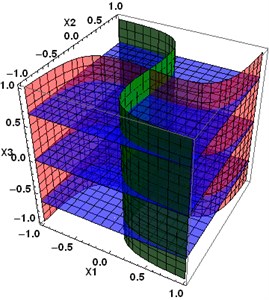 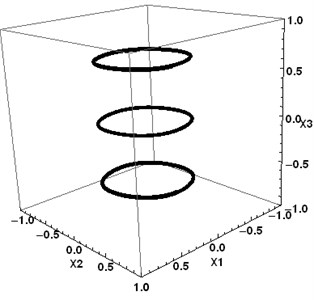 Let the coefficients of the system Eq. (3) be perturbed as:

Fig. 5. Nullclines of the system Eq. (3) with the coefficient matrix 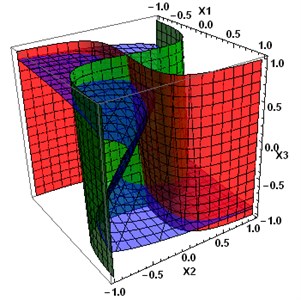 Fig. 6. Two periodic attractors of the system Eq. (3), coefficient matrix , and converging some other trajectories. The middle limit cycles are destroyed 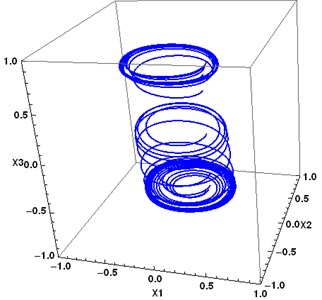 Let the coefficients of the system Eq. (3) be perturbed as:

Fig. 7. Nullclines of the system Eq. (3) with the coefficient matrix 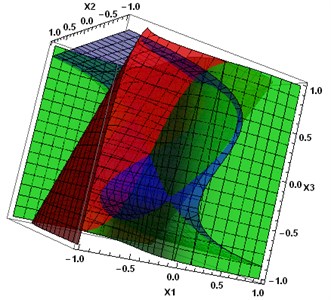 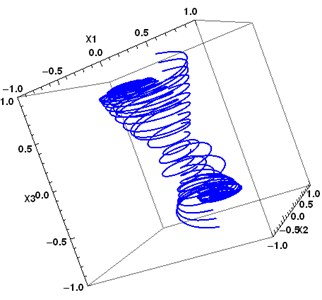 Dynamical systems, arising in neurodynamic, can have periodic attractors in the form of the limit cycles. Periodic attractors in two-dimensional systems appear as the result of Andronov-Hopf bifurcation, where the bifurcating parameter is the value at the main diagonal of the coefficients matrix . Three-dimensional systems can have two attractors in the form of limit cycles. Small perturbation of the coefficient matrix can destroy limit cycles lying in a non-stable manifold (that is, in the middle plane in the example above). It seems that two side attractors (which were in stable manifolds) are preserved under the perturbations saving the types of the corresponding critical points. For practical purposes, special attention should be paid to perturbations that preserve the structure of the nullclines and, as a consequence, characteristics of equilibria (critical points).