Copyright © 2022 Inna Samuilik, et al. This is an open access article distributed under the Creative Commons Attribution License, which permits unrestricted use, distribution, and reproduction in any medium, provided the original work is properly cited.

It is shown, how to construct a system of ordinary differential equations of arbitrary order, which has the periodic attractor and models some genetic network of arbitrary size. The construction is carried out by combining of multiple systems of lower dimensions with known periodic attractors. In our example the six-dimensional system is constructed, using two identical three-dimensional systems, which have stable periodic solutions.

Genetic engineering is a modern area of biotechnology that combines knowledge and techniques from a whole block of related sciences. It is the process of changing an organism’s DNA to introduce new, desirable traits. Many organisms, from bacteria to plants and animals, have been genetically modified for academic, medical, agricultural, and industrial purposes.

Genetic regulatory network (GRN) is responsible for many important functions of living organisms. It exists in any in any cell of any living organism. Huge amounts of experimental data are stored and need systematization and research. One the effective way of treating this is to consider the mathematical models of GRN. If they are appropriate and exhibit sufficient correspondence with experimental information, they (models) can be used for understanding, managing and control over GRN. We focus on models formulated in terms of dynamical systems. Dynamical systems, used for modeling GRN, consist of ordinary differential equations of special structure. Look at the system below.

Consider the general form of writing the -dimensional dynamical system, that is expected to model a genetic regulatory network:

where , and are parameters, and are elements of the regulatory matrix . The parameters of the GRN have the biological interpretations [2,3].

In the system Eq. (1) the sigmoid logistic function is used [4].

It is to be mentioned, that first system of this form was used to model populations of neurons [5], [6]. There were attempts to use systems of the form Eq. (1) for the creation of Virtual Network Topology to manage traffic in telecommunication networks [7]. It is recommended also to be acquainted with the articles [8], [9] on the subject.

The two-dimensional system of the form Eq. (1) is defined, if all the parameters are given. Consider 1; 20, 40; 1, –0.3. The coefficients are elements of the matrix and behavior of solutions depends on it.

The nullclines of the system Eq. (1) together with the stable periodic solution are depicted in Fig. 1 [10]. 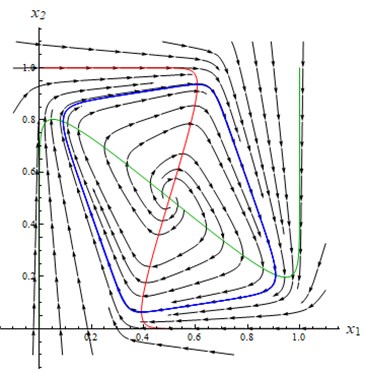 The three-dimensional system of the form Eq. (1) is defined, if all the parameters are given. Consider 1; 4; 4, 0, 0. The coefficients are elements of regulatory matrix and behavior of solutions depends on it.

The nullclines of system Eq. (1) together with the stable periodic solution are depicted in Fig. 2. There is a unique equilibria at (0.5; 0.5; 0.5). The central location of the critical point is due to the special choice of the parameters .

Fig. 2. The nullclines – red, – green, – blue and the periodic trajectory 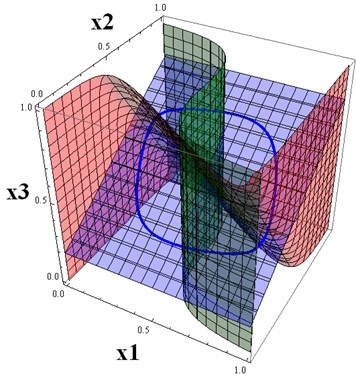 In fact, we have provided an example of the 3D system without stable critical points. More examples of this kind were obtained in the paper [11]. 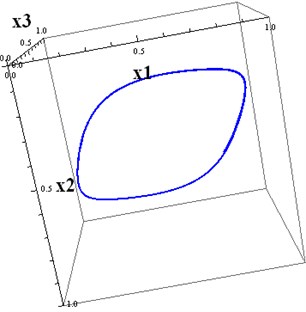 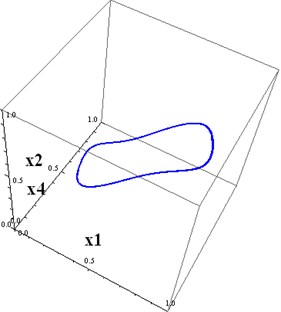 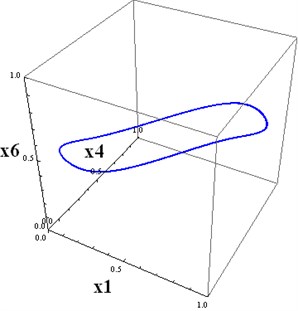 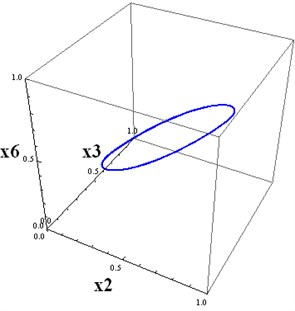 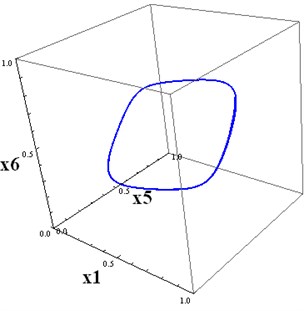 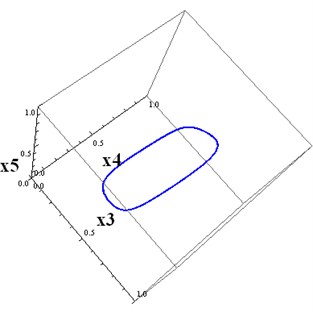