More and more people suffer from trauma and it depends on the functional movement, balance characteristics. Balance management is based on the interaction of the systems of skeletal muscles and nerves and it is important to know what the reason of traumas is for people who are more or less likely to suffer from trauma. The aim of our research was to determine the balance characteristics asymmetry properties for people who are more and less likely to suffer from trauma. The study involved 382 people aged 18-24 years. The study consisted of functional movement and balance evaluation. Seven functional movements were assessed as per the G. Cook’s criteria and according to this the subjects were divided into groups. The balance was tested on the Libra balance platform. Results obtained during the study demonstrate the feasibility of presented testing methodology to access individual peculiarities and to evaluate of effects of exercise training program. Participants who are less likely to suffer from trauma have a better balance in the frontal and sagittal planes, while they are standing with both legs with open or closed eyes on an unstable balance platform.

Movement is the basis of the human growth and development of motor skills. Movement is a lifelong necessity [4]. Many authors state that the rehabilitation approach to the assessment of human body has changed from the traditional approach – isolated assessment and enhancement of one weak link to the integrated functional approach, including the principles of neuromuscular proprioception, the methods of motor perception, and muscular synergy [6, 12]. The assessments of one segment: the assessment of the range of movements, personal physical data, and specific muscle group are usually carried out, but there is no observable correlation between the results obtained, which aggravate the comprehensive assessment of personal physical fitness level and the quality of the movement performed [7]. The quality of movement, which is important in people’s every day and sporting life, is rarely assessed. After assessing the movement by qualitative assessment methods, the weak links are better observed [5].

There are a lot of factors, influencing the balance: vestibular apparatus, information from external and internal receptors, functionality of the central nervous system, age, changes of the body mass center, emotional state, muscle strength, muscle activation, coordination, flexibility, level of training, motor development, genetics, and gender [1, 14, 20, 34, 38, 42]. Good balance depends on the accepted signals to the central nervous system (CNS) from visual, vestibular, and proprioceptive systems [37]. Good correlation of the visual and somatosensory information was obtained by the CNS results in the full-rate orientation of the body segments, stability, and movement [18]. Good balance is maintained by contracting and relaxing the muscles to which nerve impulses are transmitted from the CNS.

If a person is constantly moving with the poor posture, improper body mechanics, the movements are not performed in the full amplitudes of the joints, and bones cannot move freely through the articular surfaces, it may result in the restriction of movements and muscle imbalances [13]. Individual movements, which the combinations make functional movements, may also cause traumas [25, 33].

The assessment of functional movement performance is also important because of the human brain processes [16, 30]. When performing targeted movements, stereotyped movements are formed in the human brain [16]. Stereotypes must create harmonious, productive, efficient and economic movements. When muscles and joints movements are isolated, having pain or dysfunction, the stereotype will be irregular, and the compensating movements will be created to maintain the incomplete functionality [4, 5]. These compensational movements are a mechanism that will not become distinct when analyzing and examining one joint or one muscle group [15].

Study design. The study involved 382 right-hand people aged 18-24. The study was carried out in the Lithuanian University of Health Sciences, Institute of Sports in 2015.

Participants. All the participants were involved voluntarily; they didn’t have any acute or chronic disease.

Outcomes and measurements. The testing took place once. The study consisted of the assessment of balance and functional movement. Functional movement screen was taken for the reason to divide the subjects into groups. The assessment was carried out according to the same protocol for all the participants.

Balance was assessed using a computerized balance platform (Italy, 2002, 93/42/CEE). The system consists of a 42×42 cm platform, computer, and computer system. Each participant performed 6 exercises on this platform. The testing took 3 minutes for each participant. Each of 6 tests lasted 30 seconds. The balance was evaluated in both the frontal (Fig. 1(a)) and sagittal (Fig. 1(b)) planes while the participant was standing. 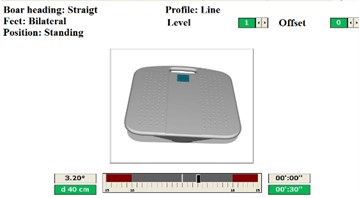 For the third and sixth tests, participants performed with closed eyes. All these tests were taken standing with straight knees, and, as noted by the requirement for participants, they should not bend their knees. All movements should be focused on one body segment-hips.

Accumulated data were processed by a computer program. Exercise performance was measured on the right and left: total area [◦sec], external area [◦sec], external time [sec], recovery time [sec] (Fig. 3). From these four numbers, the summative assessment (Fig. 4) was evaluated (ranging from 0 to 100). A lower value of summative assessment means a better balance. Total score was calculated using a software algorithm, comparing the left and right sides of the body – deviation from the midline of the results. It is also called as the stability index, it is based on the weighted average of all the variables, where ‘100’ denotes the weakest stability, and ‘0’ denotes the best one. The algorithm of summative assessment (stability index) calculation is (total area (left) + total area (right) + external area (left) + external area (right) + external time (left) + external time (right) + recovery time (left) + recovery time (right))/8. 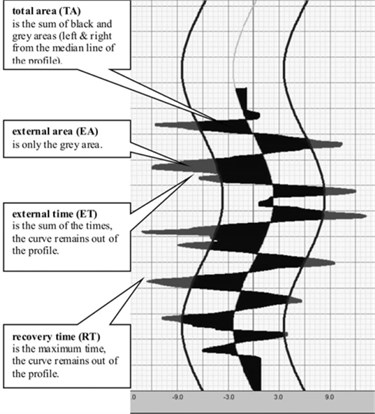 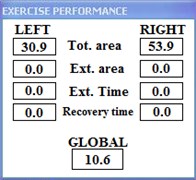 Statistical analysis. The analysis of statistical data was performed by using the program package SPSS (Statistical Package for Social Sciences) 22.0 for Windows. The difference between two independent groups was tested using the Mann-Whitney U test. While the difference before and after physical therapy was calculated using the Wilcoxon matched pairs rank test. Nonparametric tests were used because the research data was based on fewer assumptions they did not assume that the outcome had been approximately normally distributed. The significance level < 0.05 was used for the verification of statistical hypotheses. Data were presented as median (), first quartile () third quartile () and mean () – (Fig. 5). 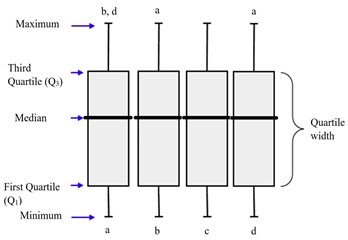 Participant recruitment. Baseline characteristics are in the 1st Table.

The assessment of balance for young people, who are more or less likely to suffer from trauma.

After assessing the stability index of the participants who were more or less likely to suffer from trauma, when performing the balance task with the open eyes, with and without a feedback in the frontal and sagittal planes, the difference was not obtained. Both groups performed these four tasks equally. After assessing the performance of balance task with the closed eyes in the frontal plane, it was determined that this task had been better performed by the participants who were less likely to suffer from trauma, but this difference was not obtained when performing this task in sagittal plane with the open eyes (Fig. 6), (Tables 2-3).

Fig. 6. Comparison of people who are more or less likely to suffer from trauma balance, in frontal and sagittal planes (a-m identification of columns – < 0.05)

Fig. 7. Fluctuation while participants took performance in frontal plane: a) with feedback, b) without feedback, c) with closed eyes 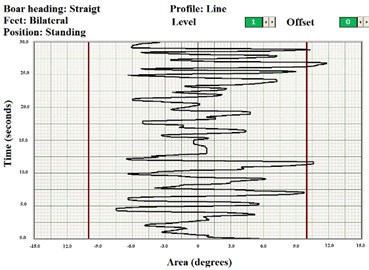 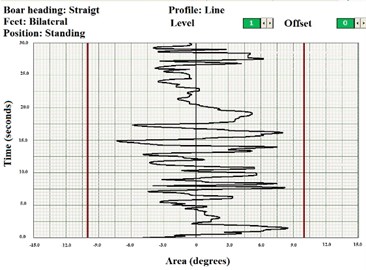 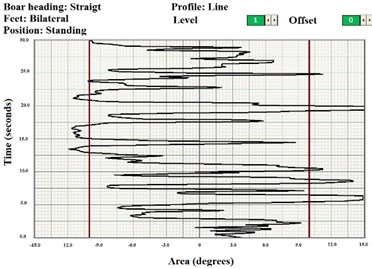 Fig. 8. Comparison of people who are more or less likely to suffer from trauma total area to the left or right, in frontal plane (a-k identification of column, < 0.05)

Fig. 9. Fluctuation while participants took exercise in sagittal plane: a) with feedback, b) without feedback, c) with closed eyes 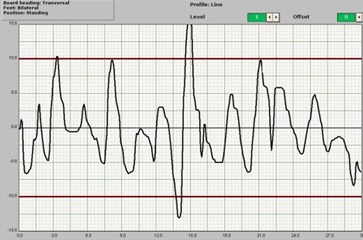 Fig. 10. Comparison of people who are more or less likely to suffer from trauma total area to the left or right, in sagittal plane (a-k identification of column, < 0.05) 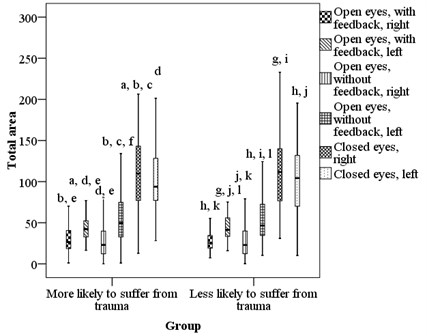 The researchers studied the young officers balance (men and women) ( 1466, age 24.7), lifestyle dependence, physical fitness, risk factors and probability to suffer of trauma. The conclusions of this study state that people, who had at least one risk factor, had a poorer balance than those who didn’t have any risk factor [39]. In our study, we did not evaluate the risk factors of lifestyle, such as inappropriate weight, smoking, previous traumatic events, but we assessed persons more and less likely to suffer from trauma. In our research, we found that there was a statistically significant difference between groups – the participants, who are less suffer from trauma, had a better balance with open and closed eyes in frontal and sagittal plane.

For explanation the results obtained during our study are very valuable the study results obtained by researchers from Slovenia [32]. The balance abilities with twisted legs analyses for 18 young people was assessed. Participants had to stay 70 seconds on the unstable platform or before losing the balance. Participants were standing in four different conditions: daylight, closed eyes, with darkened light, and full darkness with open eyes. Researches state that the balance is statistically significant different while participants took the same performance and daylight and darkened light. The conclusions of this research state that there are bigger fluctuations while participants took performances with closed eyes and in the full darkness than in the daylight or in the darkened light [32]. In our study, we got that for both groups had been more difficult to perform the balance tasks when the eyes had been closed. There were also statistically significant differences between the balance tasks with or without feedback for the both groups.

Functional movement testing requires to integrate the data of seven functional movements testing procedures [24, 41]. This takes a long time why the health professionals need for the other methods allowing to assess of such complex interaction of factors defining the individual balance asymmetry properties and evaluate the effectivity of exercise training programs. Results obtained during this study showed that testing of balance characteristics asymmetry properties could provide such useful information.

Results demonstrate the feasibility of presented testing methodology to access individual peculiarities and to evaluate of effects of exercise training program.

Participants who are less likely to suffer from trauma have a better balance in the frontal and sagittal planes, while they are standing with both legs with open or closed eyes on an unstable balance platform.