Manufacturing and characterization of CNT based polymer composites

Carbon nanotubes have been the concentration of all-encompassing research due to the excellent mechanical, thermal, electrical and magnetic properties. In the present work fifteen specimens of polymer composites is manufactured, multi walled carbon nanotubes (MWCNT’s) are considered as filler material for proposed volume based amount and for three unique direction of E glass fiber. The effect of different percent loadings of MWCNTs on the morphology and thermal behavior of the composites had been inspected. Thermal analysis investigation showed that a clear improvement of thermal stability of composites increased with increasing MWCNTs content. The experimental results are compared with statistical results and found to be in good agreement.

Sumio Ijima developed carbon nanotubes (CNTs) in 1991 [1]. The researchers concentrated on this material for the reason that they have unique structural, mechanical, electrical, thermal and other materials related properties of carbon nanotubes [2-4]. It gives amazing opportunities for the development of new material. Carbon nanotubes is the key basic of the nano technology, as it controls the issue on nanoscale and its consequences for properties of composite materials. CNT’s have been utilized as a part of numerous potential applications such as nano electronic and photovoltaic devices [5, 6], super conductor [7], electromagnetic actuator [8], and nano composite materials [9, 10]. A polymer composite comprises of a polymer matrix with nano-sized filler. A wide range of sorts of filler have been tried and are additionally utilized monetarily to enhance the properties of polymers. In this unique situation, CNTs is a standout amongst the most fascinating filler for future applications.

Due to their uncommon properties and large aspect ratio, minute bulk of CNTs can have a large influence on the properties of a composite [11-13]. The carbon nanotubes are insoluble in any organic solvent and troublesome in dispersion in a polymer matrix due to strong Vander Waals interaction. Additionally, carbon nanotubes tend to form into aggregates and it is a negative impact on the properties of composite. In general, there are several methods for dispersion of CNT/polymer composites.

They can be summarized as magnetic stirring, shear mixing, reflux, most commonly used ultra sonication [12], solution mixing, melt blending, In situ polymerization, latex technology and layer-by-layer deposition [14]. Solution mixing is one of common method for the fabrication of CNT/polymer laminated composites because it can be accepted for small sample size [15-17]. Blending of solution involves in three methods; dispersion of CNT’s in a solvent by mechanical mixing, magnetic agitations or sonication. Carbon nanotubes can also dissolve in polymer resins at room or elevated temperature [14]. Melt blending is commonly used method to fabricate CNT/polymer nano composites. Thermo plastic polymers, such as polypropylene [18], polystyrene [19], poly (ethylene 2, 6-naphthalate) [20] can be processed as matrix materials in this method [14]. In situ polymerization is an efficient method for uniform dispersion of CNT’s in a thermo setting polymers. The advantage of this method is that covalent bonding can be formed between functionalized CNT’s and polymer matrix, hence much improved mechanical properties of composite through strong interfacial bonds [14, 30].

The fabrication of CNT based polymer nanocomposites most part done through resin transfer moulding and hand lay-up method. Hand lay-up method is a reliable process; it is by its nature very slow and labor-intensive. Resin transfer moulding is another method used for complex shapes at relatively at high production rates [24, 25]. It should be noted that nano composite materials are significant in the emerging field, many studies are being made to devise new processing methods that can produce nano composites with unique structure and properties for required and for the defined applications [21-23].

Hsu et al. [26] investigated thermal stability of MWCNT/biphenyl liquid crystalline epoxy composites by TGA. The decomposition temperature (Td) demonstrates a continuous increment up to 2.0 wt % epoxy functionlized-CNT (e f-CNT) composition in epoxy matrix. This might be ascribed to the huge increment of interfacial bonding between the matrix and the reinforcement. Bhattacharya et al. [27] examined on multi wall carbon nanotubes based nanocomposites. The thermal stability of the RAMs namely RAM-MW, RAM-Ti, RAM-Ti@MW and RAMTi@MW/Fe were analyzed by TGA instrument, in nitrogenous atmosphere. RAMTi@MW/Fe is comparatively most thermally stable material among all. Maximum weight loss for RAM-MW, RAM-Ti, RAM-Ti@MW and RAMTi@MW/Fe in 81, 79, 77 and 74 % respectively, decreasing trend which may be due to the increase in multiple bonding sites provided by different fillers presented in the composites.

The fiber chosen were woven roving glass mat for fabricating specimens. Polyester, epoxy, phenolic and vinyl ester are mostly used as thermoset resins, the matrix materials used is LY556 (Bisphenol-A-Diglycidyl-Ether) epoxy resin and hardener is HY951 (Tri-ethylene-Tetramine). Multi walled carbon nanotubes are selected as the filler material for the high tensile modulus and strength, low aspect ratio, low density, high flexibility, excellent thermal and electrical properties. These are allotropes of carbon, made out of at least two concentric round and hollow shells of graphene sheets with diameter in the nano meter scale.

Solution technique is used for fabrication of the CNT composites. The calculated amount of epoxy (LY 556) resin is taken into a glass beaker and four different volume percentages such as 1 %, 3 %, 5 % and 7 % of CNT are added with epoxy resin. Six layered of E glass fibers were used to fabricate. The fibers were directed at [0°/90°], [0°/45°] and [0°/135°] orientation. A magnetic stirrer is used for homogeneous dispersion of multi walled carbon nanotubes in epoxy resin for proposed quantity of volume percentage, stirrer at different RPM for 30 minutes at room temperature. After well dispersion of CNT, HY951 hardener is carefully mixed with the epoxy/CNT solution in the ratio of 1:10 for curing of the composite. A rectangular mould of size (300×300×3) mm3 is used for making the CNT composite. For fabricating composites the mould is coated with one layer film of liquid polyvinyl alcohol as an easy releasing agent. A fifteen number of specimens were prepared with CNT based composites by hand lay-up technique. The fabricated specimens are shown in Fig. 1-3. Entrapped air and volatiles are removed by rolling the composite laminate with a smooth steel roller, which also ensured that the resin is uniformly distributed over the glass fiber surface. The process is repeated to get the composite laminate thickness of 3 mm plate. Finally, the composite has been allowed to fully cure at room temperature for 24 hours. 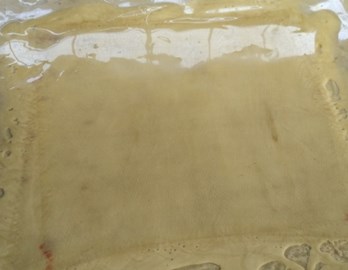 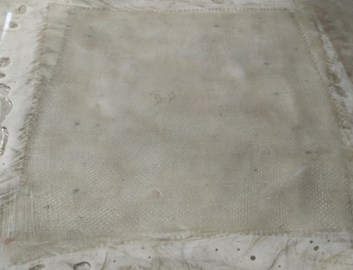 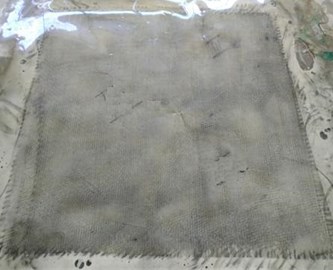 Thermal degradation properties of the nanocomposites were measured by thermogravimetric analysis (TGA) from room temperature to 850 °C with a heating rate of 10 °C/min under atmosphere. The measurements were conducted using 6-10 mg samples for fifteen composites. Weight retention/temperature curves were recorded.

A non linear regression analysis was done to build up a relationship for thermal degradation, weight loss and thermal decomposition with respect to the experimental data of specimens. In order to calculate error and to compare between the experimental data and the regression based data for each individual specimen graphs are plotted. Examination was performed utilizing Mini Tab software.

Scanning electron microscopy is utilized to investigate the dispersion of carbon nanotubes and surface morphology of the composite. The voids and pores may prompt to stress concentration and leads to premature failure of the composite during loading. As the cracks got started, the matrix materials were lost, generally the form of resin particles. The SEM evidence in Fig. 4 and 5 supports this explanation. 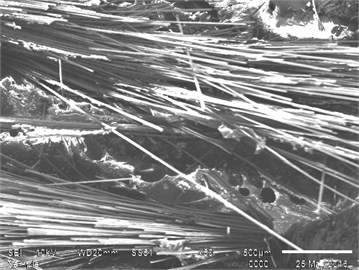 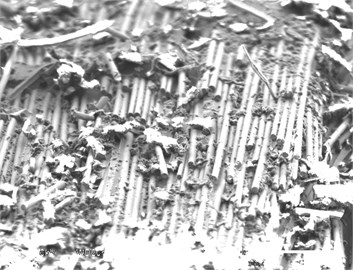 Fig. 7. SEM image of the fracture surface of the tensile tested specimen for [0°/90°] specimen 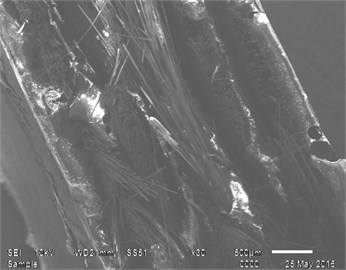 3.2. Thermal analysis of CNT based composites

There are three primary mass loss processes. In the first stage, the slight mass loss below 100 °C could be attributed to the evaporation of absorbed water and 100°-300 °C the weight loss due to the removal of oxygen containing groups on the surface. In second stage, the temperatures from 300°-500 °C can be assigned to the oxidation process. In the last stage, the temperature from 500°-800 °C weight loss due to decomposition of carbon nanotubes as shown in Fig. 11, 12, 13 for [0°/90°], [0°/45°] and [0°/135°] oriented composites respectively. 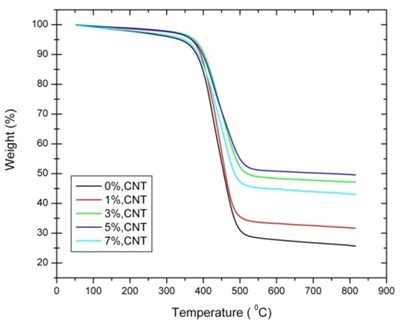 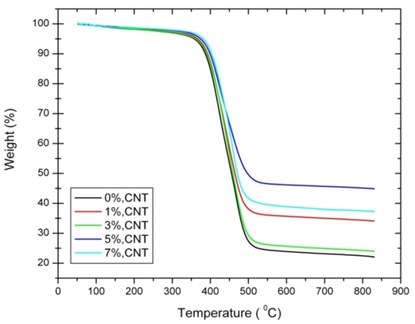 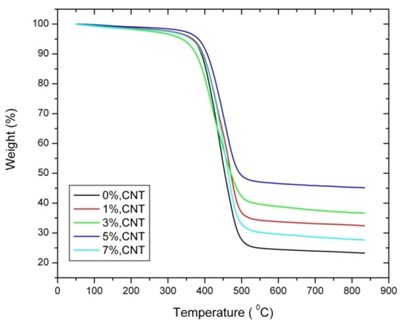 In the present study for [0°/90°], [0°/45°] and [0°/135°] oriented composites, the carbon nanotubes based composite at 5 % MWCNT is thermally stable up to 337.6 °C, 360 °C, 350 °C respectively and it was the highest among remaining percentages. The carbon nanotubes based composite at 5 % exhibits better outcome in increasing the thermal stability of specimens. The results indicate that adding carbon nanotubes will raise the temperature of maximum thermal degradation. The reason for this higher thermal stability of composites may be due to increase in the degree of cross-linkage as well as in the crystallinity of matrix material.

The dependence of the decomposition temperature on MWCNTs content. As CNT content is increasing, the thermal decomposition temperature is also increased and later decrease for higher loading of CNT percentage, probably due to the ease of compact char formation for the composites during thermal degradation. The material will not starts decompose until that particular temperature. The composite with 5 % MWCNT is comparatively most thermal stable material among all and does not decompose until 566 °C, 552 °C, 554.5 °C for different orientations. On the other hand, high concentration MWCNTs would definitely prevent its fine dispersion and more aggregation or bundles could often be formed because of Vander Waals force among the MWCNTs, thus deterioration the thermal stability of the composites. 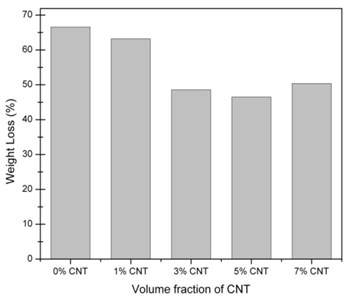 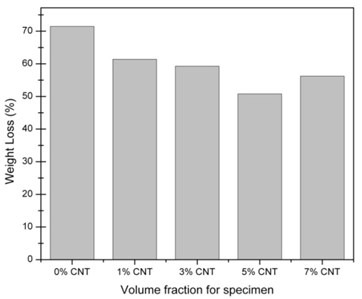 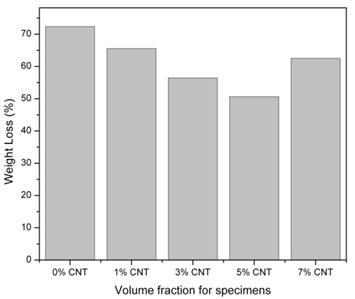 In statistics, regression analysis is the technique for the modeling and finding analysis of numerical data consisting of values of dependent variables (response variables) and one or more independent variables(predictors). Several prediction techniques have been used to model the thermal properties of composite materials based on different parameters. Regression model is most helpful technique in determining the thermal properties of fiber-reinforced polymer composite. A positive effect is achieved, so we are considering thermal properties data for statistical prediction using regression model. The experimental data was used to generate a mathematical model using regression analysis. By using that equation, an error can be found by placing the experimental values in that equation. By comparing the experimental values and regression values an error can be found for thermal behaviour of the composites

Regression equation is formulated to get the relation between response/dependent variables i.e., thermal properties () and the input parameters i.e., volume percentage ().

This function fits a polynomial regression model to the powers of a single predictor by the method. Interpolation and calculation under the curve are also given. The thermal properties are analysed by using thermogaravometric analysis have been formulated in polynomial equation by regression models. 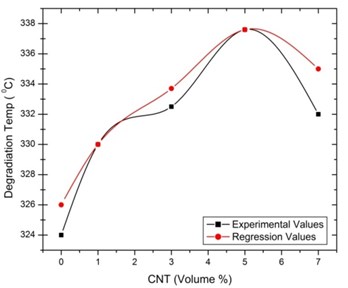 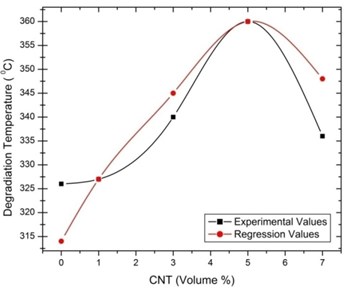 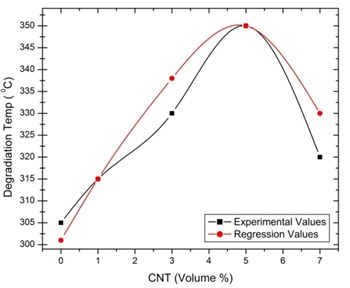 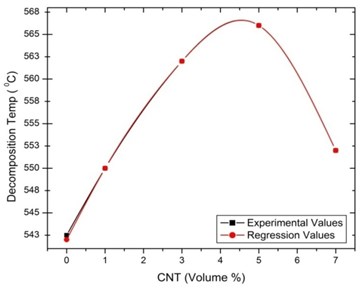 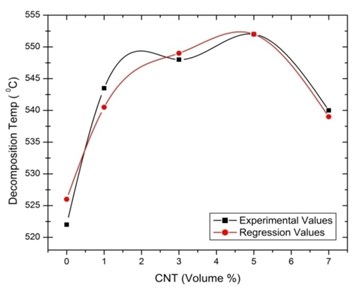 The square residual values () of tensile and flexural strength for proposed percentage of multi walled carbon nanotubes were found to vary between 0.97 to 0.98 respectively in the regression model. As of 1.0 represent that the regression curve perfectly fits the data. is a statistic that give information about the fit of curve for collected experimental data. In regression, the coefficient of determination is the measure of how well the regression line approximates the real data points. The Figs. 23 to 28 shows the comparison between the experimental and predicted strength values.

The MWNTs/epoxy composites exhibit higher thermal degradation temperature compared to the neat composite i.e., 324 °C, 326 °C and 305 °C for their orientations at 5 % CNT. Similarly, the optimum values of thermal decomposition temperature are attained as 566 °C, 552 °C and 554.5 °C at 5 % CNT content. The weight loss is also less at 5 % CNT percentage for different orientation of fibers.