Copyright © 2018 Jinfeng Yu, et al. This is an open access article distributed under the Creative Commons Attribution License, which permits unrestricted use, distribution, and reproduction in any medium, provided the original work is properly cited.

Eutectic composite ceramics have been increasingly used due to their excellent mechanical and functional characteristics. The rupture stress of a material, an important mechanical index, greatly limits its applications. The rupture stress of a material is dependent on numerous factors, particularly its micro-structural characteristics and defects. Eutectic composites ceramics are primarily comprised of rod-shaped crystals formed via combustion synthesis. Aligned nano-micro fibers are embedded within the rod-shaped crystals [1]. Previous experiments have shown that these cracks are propagated along the rod-shaped crystals through deflection. A method of preventing these rod-shaped grains has not yet been developed. As applied stress increases, inter-facial debonding inevitably occurs through micro-cracking along the boundaries of rod-shaped crystals, resulting in pull-out work. The pull-out work increases the fracture surface energy of the composite.

Sizes of defects and micro-structures exhibit nearly identical orders of magnitude, and, in some types of eutectic composite ceramics, the matrices surrounding defects is anisotropic. Therefore, crack tip stress fields and rupture mechanisms of defects in anisotropic matrices are complex. Despite these complications, considerable progress has been made in research. Sih [2] and Willis [3] developed a way to obtain the crack tip stress fields and stress intensity factors of matrices, providing a basic method for studying the fracture mechanisms of anisotropic materials. The prediction model of eutectic composite ceramics with rod-shaped crystals was built by Liu [4]. This study provided excellent resources concerning the rupture stress of eutectic composite. 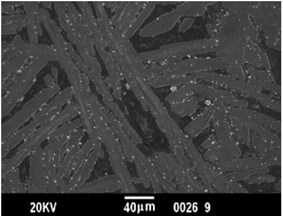 Fig. 2. Pull-out of a rod-shaped crystal bridging a crack plane

Additional fracture work can be calculated based on its origination from a frictional clamping force. Consider a rod-shaped crystal of radius that is pulled from a mating surface across the fracture plane (Fig. 2). The pull-out work is given by the integral of the frictional force divded by the pull-out length, . The frictional stress is represented by . The area over which this stress operates is expressed as 2 where is the instantaneous distance over which the eutectic is clamped. This length varies with the extent of pull-out. Initially, the value of is represented by (slip length), but then decreases with the pull-out distance, represented by . Thus, pull-out work can be expressed as:

As shown in Eq. (3), as the slip length increases, the dissociated work of the rod-shaped crystal also increases. Thus, larger slip lengths are necessary to produce large amounts of more additional fracture work in a rod-shaped crystal. However, slip length is limited by certain conditions, and only a relatively weak connection interface can possess a large slip length. The experimental results indicated that micro-slips would be observed in the weak interface of a rod-shaped crystal under loading. Once reaching a certain value, the slips resulted in micro-interface debonding. As the load increased, the micro-interface debonding was further dissociated. Thus, the additional fracture work increased with the slip length and interface frictional shear stress.

Furthermore, the slip length should increase with the critical length () since both are dependent on bond strength. When a rod-shaped crystal is long, , where is the length of the rod-shaped crystal. By assuming that , is expressed as follow:

Here is the breaking stress of a rod-shaped crystal as determined by Ni et al. 2014 [6]. We obtain:

When the lengths of rod-shaped crystals are less than the critical length, bridging still contributes to fracture work. Under these conditions, the average pull-out length is likely to be on the order of . By substituting for in Eq. (5), the additional fracture work per unit area can be obtained.

Eutectic composites primarily consist of rod-shaped crystals, with particles and small defects dispersed throughout. Consider a eutectic composite with defects consisting of three-phase cells randomly and spatially distributed with an appropriate matrix volume fraction of matrix. All of these cells have the same shape and can be embedded into the equivalent medium shown in Fig. 3. In the three-phase cell, the effective matrix surrounding an elliptical defect consists of uniformly-distributed rod-shaped crystals and is transversely isotropic (where and comprise the basal planes), and the ellipsoid defect is defined as 1, where , and is perpendicular to the rod-shaped crystal. Let be the effective applied stress at infinity. The boundary conditions on the crack surface are equal to:

Fig. 3. Three-phase model of a defect 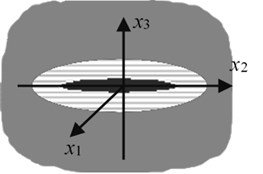 where is a corresponding component of the fourth-order stiffness tensor of the matrix. , , . Using the following variable substitutions:

where and the interaction energy can be expressed as:

Assume that the defects propagate self-similarly. Then the Griffith fracture criterion is equal to:

where is the fracture surface energy of the material. By substituting Eqs. (13) into Eq. (14), we can obtain:

Thus, the rupture stress can be expressed as:

Each component for the stiffness tensor of matrix composed of rod-shaped crystals can be determined by Li et al 2011[8].

The Al2O3/ZrO2 ceramic composites were obtained through a eutectic reaction under a high degree of undercooling. The samples were cut and grounded into rectangular bars measuring 3 mm (width)×4 mm (height)×36 mm (length) in order to determine their rupture stress.

Table 1. Comparison of the theoretical and experimental results

The experimental rupture stress data was measured using a three-point bending method with a cross-head speed of 0.5 mm/min and a span of 30 mm. The volume fractions and average diameters of the defects were determined using the linear intercept method on an SEM photograph. The theoretical rupture stresses were calculated using Eq. (17). The comparison between the theoretical and tested results is shown in Table 1. The predicted rupture stresses corresponded with the tested data.

The rupture stress of the eutectic composite ceramic was determined using its fracture surface energy and preexisting defects. The equivalent fracture surface energy of the eutectic ceramic composite was computed based on its additional fracture work. The microstructure model was established based on the characteristics of eutectic composite materials with preexisting defects. Assuming a material is completely brittle, its rupture stress model containing its lamellar defects was obtained using Griffith's fracture theory. The material was assumed to be completely brittle for simplification, and the results were less than the experimental values.

This material is based upon work supported by the National Natural Science Foundation of China under Grant No. 11272355.