Dynamic analysis of reciprocating compressor with a translational joint clearance

Copyright © 2018 Shouguo Cheng. This is an open access article distributed under the Creative Commons Attribution License, which permits unrestricted use, distribution, and reproduction in any medium, provided the original work is properly cited.

The main movement mechanism of reciprocating compressor is crank slider mechanism, as shown in Figure 1. Many researchers have done a lot of research on mechanism dynamics for clearance. Paulo Flores has achieved great success in studying the dynamics of mechanisms with clearance. A general methodology for dynamic modeling and analysis of multibody systems with multiple clearance joints is presented [1], which considered the clearance size, input crank speed, and number of joints. A dynamic description of the dynamic description of a rigid body multibody system with a translational clearance joint is presented [2]. The four contact structures between the sliders and the guide are considered. A dynamic modeling and analysis method for a rigid body multibody system with a translational clearance joint is proposed and discussed by Flores. The method is based on a non smooth dynamic method, in which the interaction of elements that constitute a translational clearance joint is modeled by multiple frictional unilateral constraints [3]. Haiyang Zhao, et al. [4] proposed genetic algorithm to optimize the parameters of the clearance joint model and verified the effectiveness of the method with an experimental device. Imed Khemili and Lotfi Romdhane simulate and test the dynamics of a planar flexible slider crank clearance mechanism [5]. The modeling and simulation of a non smooth rigid body multibody system with friction translation joints are carried out by Wang Qi [6, 7].

The dynamic simulation of reciprocating compressor with a translational clearance joint in ADAMS is carried out in this paper. The influence of translational joint clearance size and crank velocity is discussed. The Lyapunov exponent phase diagram are used to discuss whether the system is in chaos or not.

The ideal reciprocating compressor motion mechanism is composed of three rotating joints and a translational joint. The mechanism model with the clearance of a translational joint is composed of three revolving pairs. The crosshead and the guide contact in different positions and collide each other. The horizontal direction is linear motion under the thrust and tension of the connecting rod. The force acting on the piston in reciprocating compressor valves, pipes, cylinders, etc. is expressed by of gas force [4], as shown in Fig. 1. Assuming that the crankshaft rotates at a constant speed, there are no clearances in the three revolute joints.

Fig. 1. schematic of reciprocating compressor with a translational clearance joint

In the process of simulation, the contact force between crosshead and slide rail is very important. In order to get closer to the real working conditions of reciprocating compressor, solid to solid contact type is selected in the simulation, and the crosshead and the guide are selected respectively for two solids. By setting parameters such as normal force, stiffness and force exponent, the ADAMS software can calculate the magnitude of contact force according to Eq. (1).

The local deformation of the contact region is defined as the penetration depth (: mm). The motion mechanism of reciprocating compressor for metal materials, elastic index 1.5.

The instantaneous damping coefficient and penetration depth relationship in ADAMS:

Because the modeling function of ADMAS software is not flexible, the Solidworks software is used for 3D modeling, and the Parasolid format file is imported into ADAMS software. The parts of reciprocating compressor such as crank and connecting rod are regarded as rigid bodies. The rotating joint is considered as an ideal constraint. There is no translational joint between the crosshead and the guide, and the interaction force is established by the contact collision function, otherwise the crosshead will rotate with the rotation of the connecting rod. The force of the cylinder side is expressed by the IF function. The wear between the crosshead and the track assumes wear on the lower side, but there is a bilateral collision between the crosshead and the guide. After the system is stable, the value of two cycles is plotted into Figs. 2-5.

3.1. Influence of the clearance 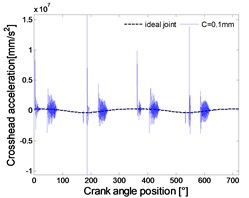 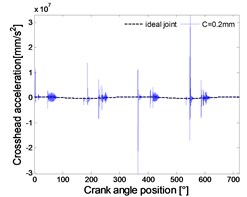 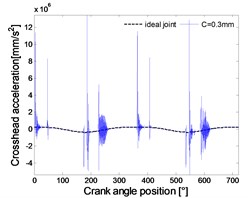 3.2. Influence of the crank speed 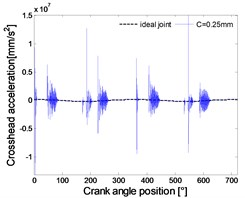 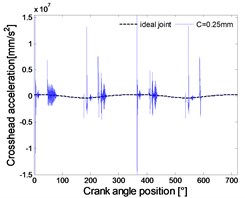 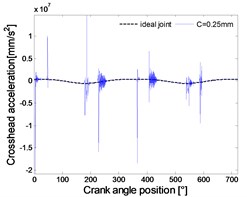 Joint clearance often brings obvious nonlinear characteristics to the system. Phase diagrams and Lyapunov exponent are often used as mathematical tools for qualitative study of the dynamic characteristics of nonlinear systems. It can be seen from Fig. 4 and Fig. 5 that the crosshead motion with the translational joint clearance may be chaotic. 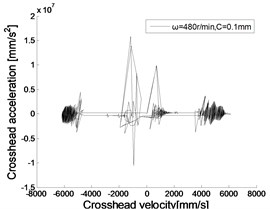 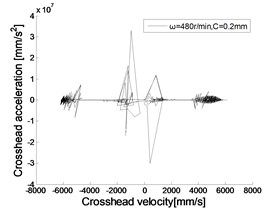 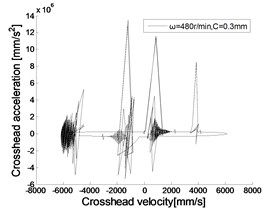 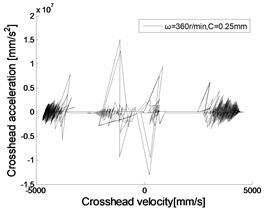 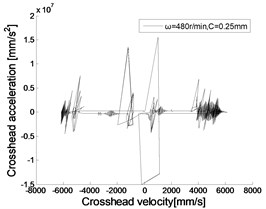 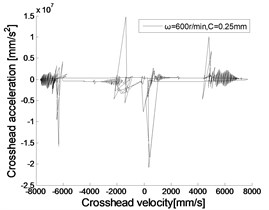 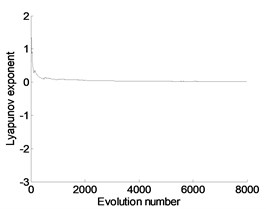 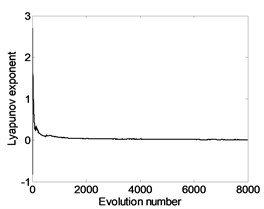 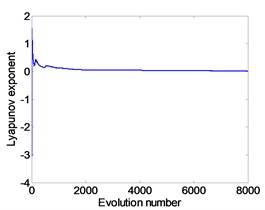 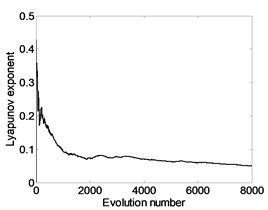 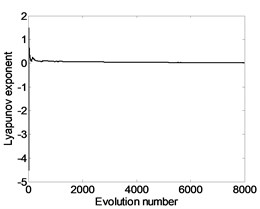 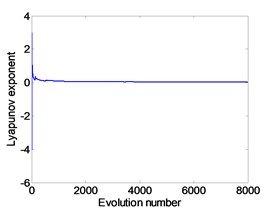 It can be seen that the system exhibits chaos in the case of translational joint clearance because all the maximum calculated Lyapunov exponent values are greater than zero.

The wear clearance of crosshead of reciprocating compressor is discussed in this paper. The simulation model is established by dynamics simulation software (Adams), and the interaction force between the crosshead and the guide is established by contact impact function. The influence of crank speed and clearance size on crosshead acceleration is analyzed. The nonlinear characteristics of the system are analyzed by phase diagram and Lyapunov exponent. The results show that the crosshead is worn and the system motion is chaostic. In the analysis of the impact of the size of the translational joint on the acceleration of the crosshead, a simple observation cannot be used to determine the degree of failure. The signal processing method should be used to continue the analysis of the calculation results.

This work is supported by the Natural Science Foundation of China (51575331).