Copyright © 2018 Chengcheng Zhu, et al. This is an open access article distributed under the Creative Commons Attribution License, which permits unrestricted use, distribution, and reproduction in any medium, provided the original work is properly cited.

Huang et al proposed the Empirical Mode Decomposition (EMD) [3]. EMD has been widely used in early fault diagnosis of rolling bearings since it was put forward [4]. EMD is a powerful tool for analyzing non-stationary signals and nonlinear signals. However, there is a lack of strict mathematical foundation, low algorithm efficiency and modal aliasing.

In 2014, Dragomiretskiy et al. [5] proposed a new adaptive signal processing method, Variational Mode Decomposition (VMD). In the process of obtaining the decomposed components, the method iteratively searches the optimal solution of the variational model to determine the frequency center and bandwidth of each component. Thus, the frequency division of signals and the effective separation of components can be realized adaptively. Compared with EMD, VMD has a solid theoretical foundation, and its essence is a number of adaptive Wiener filtering groups, showing better noise robustness [6]. However, there is nothing VMD can do about the random noise in the signal.

In order to solve the problem, the random decrement technique (RDT) is introduced in this paper. Random decrement technique is a method of identification of modal parameters, which is first proposed by Cole [7, 8] in 70s. The basic concept of RDT is to assume a system with stationary random excitation, and its response is the superposition of both deterministic and random responses. The deterministic response is separated from the random response, and the random response is eliminated by using the statistical mean method. Finally, a deterministic free attenuation signal is obtained by filtering. RDT has been widely used in many fields such as vibration modal analysis [9], and structural damage detection [10].

2. Feature extraction based VMD and RDT

According to the Reference [11], we get the complete algorithm for VMD, summarized in following algorithm.

Dual ascent for all:

The reconfiguration signal can be expressed as:

The overall mean of the segment signal is calculated, and the random decrement function can be expressed as:

The experimental system is shown in Figure 1, including vibration sensor, coupling, driving motor, torque decoder/encoder and dynamometer. The type of the test bearing is SKF 6205-2RS, and the technical parameters of the bearing are shown in Table 1. 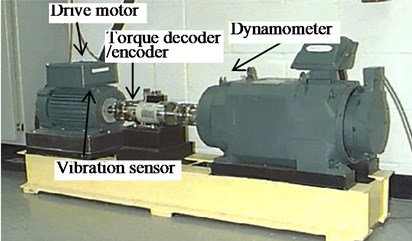 Electric spark is used to process faults on bearing outer ring. The fault of diameter 0.18 mm and depth 0.28 mm is used to simulate the slight faults of outer ring. The speed of the driving motor is 1750 r/min, the sampling frequency is 12000 Hz, and the number of sampling points is 32768. Through theoretical calculation, the rotation frequency of the bearing can be obtained  29.16 Hz; the fault characteristic frequency of the bearing outer ring is 104.3Hz.

Table 1. The technical parameters of the bearing

Fig. 2. The time-domain and frequency domain waveform of the early fault vibration signal of the rolling bearing outer ring

In order to highlight the fault features, the vibration signal is processed by the method proposed in this paper. The number of decomposed modes is 4. The vibration signal is decomposed by VMD, and the component U2 and U3 with the largest correlation coefficient of vibration signal are selected as fault components. Then the fault component is processed by random decrement method and its Hilbert envelope spectrum is calculated, as shown in Fig. 3. It can be seen from Fig. 3 that the fault component of rolling bearing outer ring contains many characteristic frequencies, including 2 times the frequency 58.6 Hz, the outer ring fault characteristic frequency 100.1 Hz (the reason which is not exactly consistent with the theoretical value 104.3 Hz is the effect of the random sliding of the rolling element) and its 2 frequency doubling 200.2 Hz. In addition, there are also modulation sidebands, such as 158.7 Hz ( 158.7 Hz), 258.8 Hz ( 258.8 Hz), 358.9 Hz ( 358.8 Hz), and 459 Hz ( 459 Hz). Therefore, the proposed method successfully extracted the characteristic frequency of the early fault of the outer ring of the rolling bearing.

Fig. 3. The Hilbert envelope spectrum of the fault component 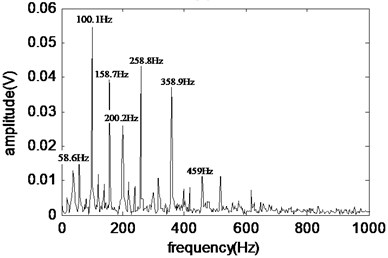 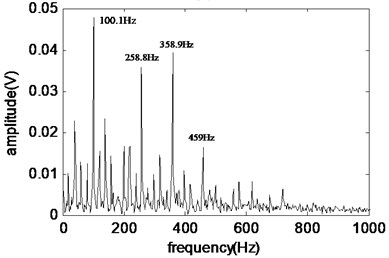