Copyright © 2018 Enbing Yi. This is an open access article distributed under the Creative Commons Attribution License, which permits unrestricted use, distribution, and reproduction in any medium, provided the original work is properly cited.

Several rock burst accidents occurred during the excavation of the 4th seam in a mine. Based on the geological and mining conditions of the mine, numerical simulation methods was adopted to analysis the protective effect of the upper and lower protective seam mining on the 4th seam, and the causes of rock burst occurring in the roadway of LW 1410 was explained. Further, the characteristics of stress distribution in 6th seam and 1th seam was discussed, this is the bases for determining the protective effects of upper and lower protective seam mining, as well as the critical pressure relief angle and the critical pressure relief point location in the 4th seam. These parameters would provide meaningful information for optimizing the roadway layout and preventing rock burst in the subsequent face mining of 4th seam.

In order to prevent and control the disaster of rock burst, the technology of protective seam mining is one of the effective measures [1-7]. Many scholars have carried on extensive research on the principle and control technology of rock burst disaster, and have obtained remarkable outcomes [8-11]. Zhu Yue Ming et al. [12] discussed the feasibility of the steep seam protective seam mining in Wuchengjian mine, and provided a scientific basis for safe mining. Dou linming et al. [13] adopted field research, theoretical analysis, numerical simulation and in-site test method to study the principle of reducing load and reduction of thick seam sub-level caving mining. By increasing the mining thickness in a reasonable magnitude, the static load and the dynamic load would decrease after the implementation of the fault-top measure. Many scholars [14-17] have conducted researches on the early warning and monitoring of rock burst and protective seam mining, and have a pretty mature method for the law of overlying strata movement and the control of mine pressure. However, there are few researches on the prevention and control of rock burst by systematic analysis on the effects of protective seam mining on coal seam with high bursting liability. In this paper, the protective effect of the protective seam mining on the middle protected seam is studied on the bases of the geological and mining conditions of a coal mine.

There are 6 seams that are available for mining, they are 1st, 4th, 6th, 13th, 15th, 16th coal seam. The highest depth of them are about 1200 m, and the 4th seam is the main mining seam of the mine, sub-level caving mining is adopted in 1410 workface. More than 100 rock burst accidents have occurred in the mine, resulting in a lot of serious damage and even scrap, as well as casualties and serious impact on safe production.

According to the bursting liability test of 4th seam, its roof and bottom strata have strong bursting liability. Since the 1410 workface started caving, there have been many rock burst accidents on the workface. In order to reduce the threat of rock burst disaster, ensure the smooth caving of 4th coal, the 6th seam and 1st seam are designed as protective mining seam for protecting the 4th seam.

Along the tendency of coal seam model, the average inclination of coal strata is 31°. The model size is 460 by 450 m and the grid number is 380 by 326. The depth of the top layer is about 820 m, and the upper layer density is 2636 kg/m3 on average, and the rocks above the top of the model are replaced by external load. The boundary conditions of the model are: no horizontal displacement at both ends, no vertical displacement at the bottom, and uniformly distributed load on the top, 21.2 MPa; the initial conditions are: no displacement of coal seams, no movement, vertical stress caused by gravity, and gravity acceleration to 9.81 m/s2. The numerical model is shown in Fig. 1. 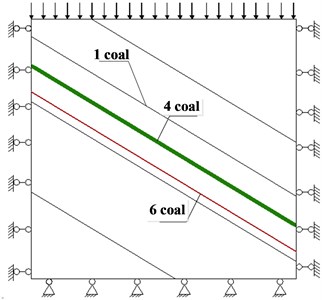 3.1. The influence of the lower protective layer mining on the protected layer in the middle.

The simulation results show that: the stress in the horizontal roadway of the 1410 working face is lower in the range of 22 m, but the change is not large. After 22 m, the stress increases rapidly. After 45 m, the vertical stress exceeds the original rock stress. After mining of 1610 working face, the stress of the surrounding rock in the roadway area of 1410 working face was relieved. The inclination angle of the upper and lower boundary of protected areas and 6th coal are 60° and 80° respectively. The change of roof crushing and ionosphere is large. It indicates that the liberated layer 4th coal can be fully relieving after the mining of 6th coal protective layer. 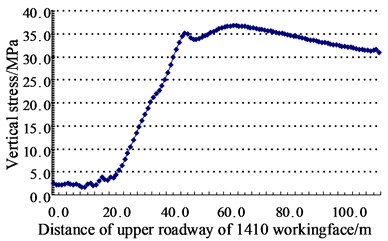 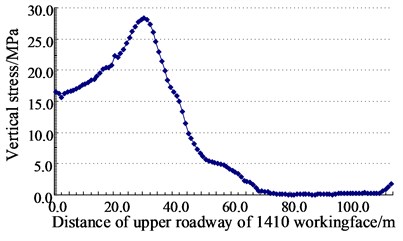 (3) The stress relief effects of the upper and lower protective seam excavation on 1410 working face.

The simulation results show that: after the excavation of the upper and lower level drift in 1410 working face, the maximum vertical stress in the 5 m wide coal pillar between 1409 working face and 1410 working face is close to 30 MPa without stress concentration. High stress concentration area appears on the right side of the upper level drift, the maximum stress is close to 60 MPa, and the stress peak appears at about 8 m from the roadway. On the right side of the roadway, the vertical stress is greater than that of the original rock. The tension stress failure zone near the lower level drift shows a better effect of pressure relief.

Fig. 4. The vertical stress after the excavation of the upper and under roadway of work face 1410 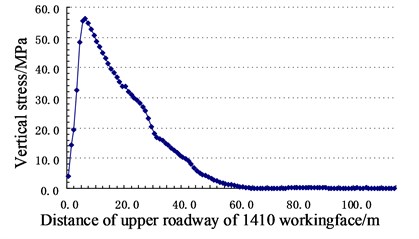 4. The pressure relief effect on the protected layer

The key to safe mining in thick coal seam with strong rock burst is to control the occurrence of rock burst disaster. Therefore, the relationship between mining technology and rock burst is the first subject to be studied. This paper studies the quantitative evaluation method of the rock burst risk of the mining in protective and protected layer based on the 1411 working face. Finally, it is applied to the deep mining level of the mine.

4.1. The simulation evaluation of the liberation effect on liberated layer

(1) Analysis of the cause of rock burst not occurred in 1409 working face.

Fig. 6 is a schematic diagram of the relief area and increasing area caused by rock strata movement while working face pushed to 260 m. From that we can find, there is a common support point of rock structure on the top of lower and upper level drift in 1410 working face at 6th mined-out area. The high stress area is formed and the rock burst is easy to occur in the region. The hard and thick layers of 6th coal roof are slowly sinking.

Fig. 5. The distribution diagram of stress-relaxed area and stress-increasing area after a mining distance of 150 m Fig. 6. The distribution diagram of stress-relaxed area and stress-increasing area after a mining distance of 260 m 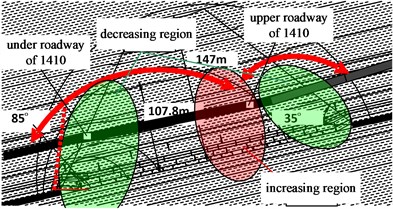 Before the mining of 1409 working face, the fracture morphology of rock strata in the 1609 and 1610 working face is shown in Fig. 9. The lower level drift of 1409 working face is in pressure relief region and the hard rock strata in the bottom of the upper drift are not broken. The effective protection height of the under protected layer is 60-100 m, effectively protect depth of floor is about 40 m, the under protective angle (intensive damage area) is 71°, edge rupture angle is 82°. 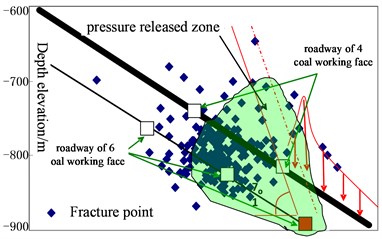 In this paper, the time effect of protective effect of mining liberation is explained. If the protected area dose not form caving or crack destruction, but only pressure relief through the deformation, the stress of the protected area will gradually recover over time. The cause of the rock burst on the upper level drift of 1410 working face has been analyzed. The surrounding rock of roadway is in constant stress concentration and release state, and the stress gradient is large, and the surrounding rock of roadway is constantly being squeezed, expanded and even reversed. When the stress of lateral support and advanced support in the process of roadway driving or working face increase the stress of surrounding rock, it may induce the impact of the roadway. In the process of mining, the coal seam inclination and the retention of coal pillar have in protected area great influence on the protective effect of the corresponding zone. The roadway design of the liberated layer should be as reasonable as possible to avoid the excavation roadway in the area where the stress concentration is likely to occur. The “lateral stress recovery zone” exists at the top of the working face goaf of the lower protective layer after the lower liberation layer is mined. When the mining depth exceeds the depth of the rock burst limit, there is still the possibility of rock burst in the protected roadway.

This research is supported by the National Key Research and Development Program of China (2017YFC0804208); National Natural Science Foundation of China (51604298).