Copyright © 2019 Hongfei Gu, et al. This is an open access article distributed under the Creative Commons Attribution License, which permits unrestricted use, distribution, and reproduction in any medium, provided the original work is properly cited. 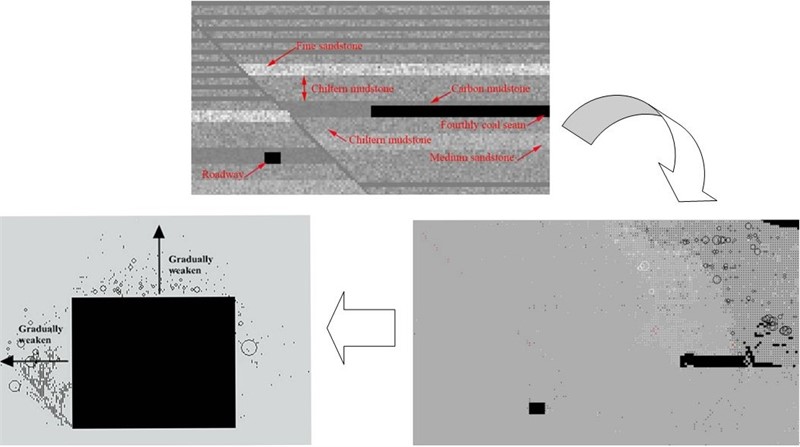 At present, it is popular to employ the comprehensive mining hydraulic powered support in the mineral resources mining industry. Although this method significantly reduces the occurrence of safety accidents in the industry, the dynamic disturbance phenomenon still appears in the roadway, which drives many experts to investigate the stability of surrounding rock of roadway after dynamic disturbance.

Literatures [1, 2] studied the propagation and attenuation characteristics of dynamic disturbance waves in coal-rock media, it provides a theoretical basis for studying the stability of roadway surrounding rock;

Literatures [19-23] obtained a stress environment to regulate the energy accumulation of the bottom plate. This technique can reduce the impact of strong pressure on the floor of the roadway, and eliminate the danger of rock burst, whereby a new “anchor-rope-net-spray concrete shell” combined support scheme is proposed for the ventilating roadway. In literatures [24-26], the stress and strain behavior of the fault-bearing rock was studied through a series of creep tests. Based on the dynamic model, Literature [27] proposed a dynamic instability criterion of the layer plate structure. In summary, the above studies focused on the influence of dynamic disturbance on the stability of surrounding rock of roadway and surrounding rock support of roadway, and few studies considered the mechanism of dynamic disturbance and fragmentation of surrounding rock in mining roadway and its control measures.

1. It obtains the mechanism of controlling the dynamic disturbance method of surrounding rock in roadway.

2. It obtains the mechanism of anchor controlling the dynamic disturbance of surrounding rock in roadway.

3. It obtains the mechanism of improving the anchor control dynamic disturbance effect of surrounding rock in roadway. 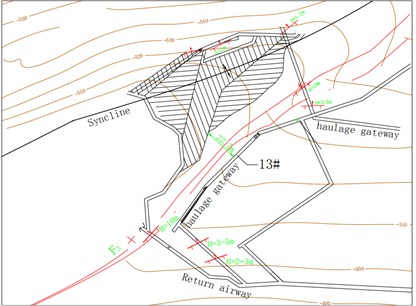 With the 2347 work facing forward, the vertical distance between the working face and the F3 fault and the haulage roadway is gradually reduced, the impact of mining on fault activation and roadway surrounding rock deformation is also intensifying, and it is necessary to further analyze the mining impact. 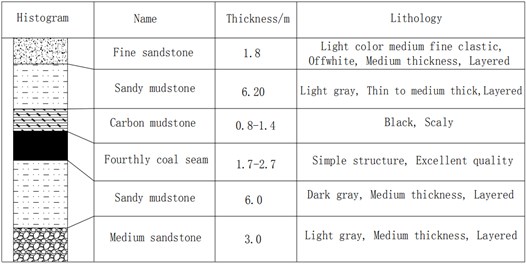 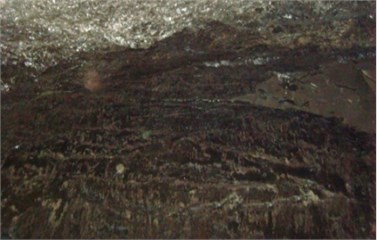 2.2. The situation of rock covered above the coal seam

Carbonaceous mudstone refers to mudstone containing carbonaceous components, generally, the organic carbon content is 10 %-30 %. “mudstone” is also called clay rock, mainly composed of fine particles with a particle size of less than 0.0039 mm, its main component is clay mineral, followed by quartz, muscovite and a small amount of feldspar, the texture is brittle and easy to break. In addition, carbonaceous mudstone has many fine pores and cracks, mostly in the form of flakes, smooth between layers, no bond force, easy weathering, hydrophilic, soften and disintegrate under loose or weathered conditions and loosely break, surrounding rock strength drops rapidly after disturbance.

2.4. Roadway support and fragmentation of surrounding rock in roof

The roadway has a depth of 691 m and a vertical stress of 17 MPa, the roadway section adopts trapezoid, the designed net width is 2.4 m and a net height of 2.1 m. It is supported by I-beam steel shed and the shed distance is 0.7 m, top laying bamboo stalks and other materials. The advanced support of the working face adopts a single hydraulic prop with a beam, there is a beam and three pillars under the beam, beam length 2.4 m.

Fig. 3. The floor heave of roadway is serious 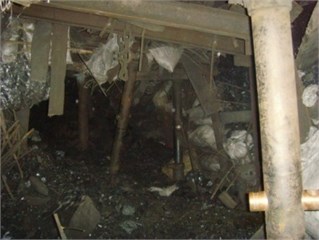 As can be seen from Fig. 3, the extrusion and bottom drum effects on the underside of the roadway (on the side of the goaf) are clearly visible; the carbon mudstone and top coal below immediate roof are seriously damaged and broken into granular, but the immediate roof is basically complete. The literatures [28, 29] shows that for the surrounding rock where the horizontal stress is the maximum principal stress, as the side pressure coefficient continues to increase, the main stress concentration degree gradually shifts from both sides of the roadway to the top and bottom plates; When the stress exceeds the strength of the surrounding rock, the process of destroying instability is: floor without support, floor heave, roadway’s sides sinking and convergence deformation, abscission layer and sinking of the roof, whole section shrinkage deformation. Obviously, the deformation and failure modes of the surrounding rock of this roadway are quite different from those under non-mining conditions, it is necessary to further analyze from the aspects of surrounding rock structure and mining conditions.

In engineering situation, positional relationship between mining roadway and fault and adjacent working face, as shown in Fig. 4, the F3 fault could change the periodic breaking interval of the main top, moreover, it may cause bending and shear failure of the main top fault zone rock, and then the main roof along the fault zone slip, the underlying roadway under the fault will undergo large deformation due to the influence of dynamic and static loads.

RFPA (Rock Failure Process Analysis) is a numerical calculation method for material fracture process analysis based on finite element stress analysis and statistical damage theory, it is a numerical test tool that simulates the process from progressive cracking to instability. According to Fig. 4, Fig. 1, Fig. 2(a), the RFPA calculation model under the non-support condition is shown in Fig. 5. To analyze the influence of the active support form of the anchor on the stability of the surrounding rock in the roadway, the RFPA calculation model for the surrounding rock in the roadway with support is shown in Fig. 10, because only the influence of bolt support on the roof carbonaceous mudstone is considered, no anchor cable is added to the model, and the rock size is 50 m×100 m and the ratio is 1:1. The mohr-coulomb model is used in this paper. The specific rock mechanics parameters are shown in Table 1. 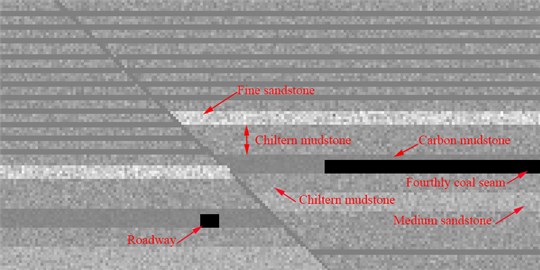 As shown in Fig. 6, as the coal seam advances in the direction of the roadway, the roof rock above the coal seam is gradually tensile and compress failure from the bottom to the top. According to the rock pressure observation data of panel 2347, periodic weighting interval 10 m-15 m, the main roof cantilever break distance in the above simulation is 15 m (5 m excavation in the simulation), that is, the periodic weighting interval in the simulation is consistent with the actual periodic weighting interval, and the surrounding rock pressure of the actual roadway is similar to the simulation data, and experience the dynamic disturbance of the main roof sliding mode fracture and fault activation slip, as shown in Fig. 7 and Fig. 8. In summary, when performing the dynamic damage analysis of the dynamic disturbance to carbonaceous mudstone, the vertical and horizontal stresses in the static pressure of surrounding rock are 4.7 MPa and 5 MPa respectively, the dynamic disturbance pressure in the vertical direction of the roof is 0.5 MPa.

Fig. 6. Rock formation fracture and slip instability and its acoustic emission during mining 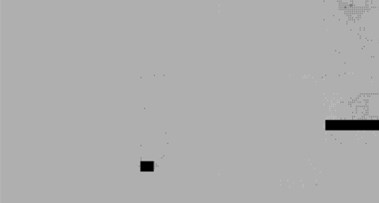 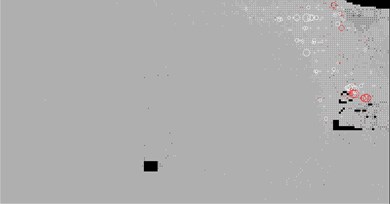 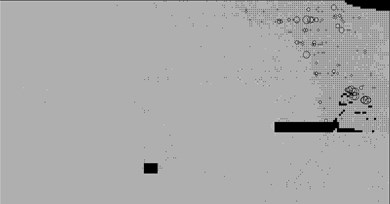 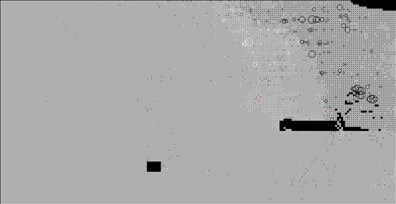 Fig. 7. Mining stress near the sides of the fault 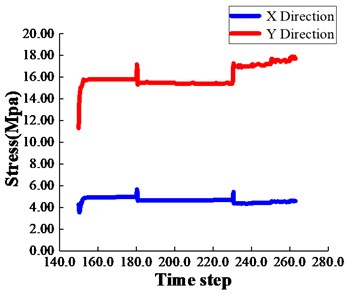 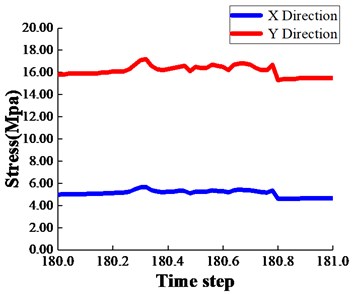 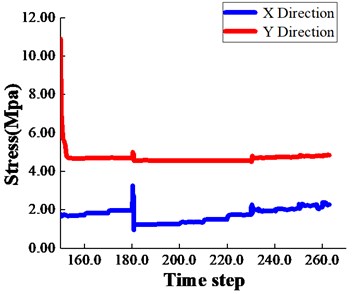 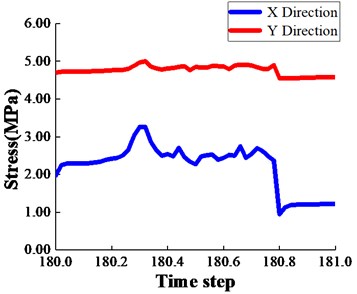 Fig. 9. Surrounding rock failure in unsupported roadway under different stress environments: a) under static load, b) under the combined action of dynamic load and static load 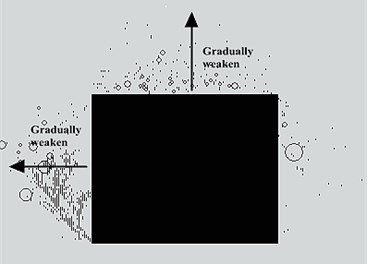 To analyze the influence of anchor support on the stability of surrounding rock (anchor support is the active support method), create a calculation model of the supported roadway as shown in Fig. 10, since only the effect of anchor support on the roof carbonaceous mudstone is considered, no anchor cable is added in the model. The supported roadway surrounding rock failure under the combined action of dynamic load and static load is shown in Fig. 11. Comparing Fig. 11 with Fig. 9(b), after anchoring the surrounding rock, significantly inhibited the expansion and dislocation slip of tensile cracks and shear cracks on both sides of the roadway, it has a good inhibitory effect on the tensile and compressive failure of carbonaceous mudstone in the roof and it also has a good inhibitory effect on the shear failure of the top carbonaceous mudstone. Because the dynamic load damage to the carbonaceous mudstone between the roof anchors is obvious, the anchor spacing and row spacing should be reduced or enhance the stiffness and main power of the protective surface member. 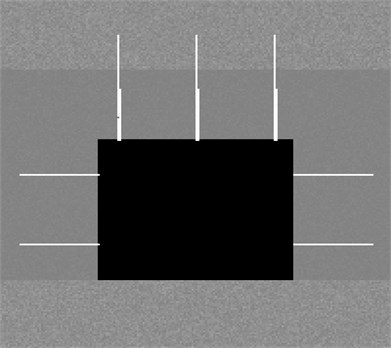 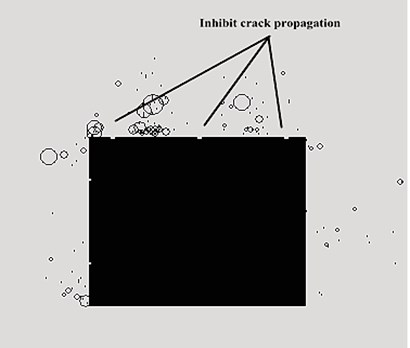 3) Because the dynamic load damage to the carbonaceous mudstone between the roof anchors is obvious, the anchor spacing and row spacing should be reduced or enhance the stiffness and main power of the protective surface member.