Copyright © 2018 Li Zhang, et al. This is an open access article distributed under the Creative Commons Attribution License, which permits unrestricted use, distribution, and reproduction in any medium, provided the original work is properly cited.

Time-delay is a key problem affecting the performance of active balancing control. In this paper, a single neuron PID control method based on Smith predictor for active balancing control of rotor with time-delay is proposed. The dynamic model of rotor is built by simplification firstly in the paper. Based on this dynamic model, a compensation model of time-delay rotor system is constructed, and a single neuron PID control method is designed to reduce rotor vibration. The parameters of controller can be adjusted adaptively and active balancing control of rotor with time-delay is realized efficiently. The simulation shows that the proposed method is superior to the traditional Smith predictor method in control performance. Particularly the proposed method still has good effect on control of rotor with large time-delay.

Currently, active balancing control with time-delay has attracted the widespread attention of many scholars. M. R. Ghazavi and Q. Sun analyzed the nonlinear dynamics behaviors of a rigid rotor supported by magnetic bearings, and they designed a nonlinear PD controller by adopting a time varying stiffness term [3]. However, the control law is only applicable to rigid rotor rather than to flexible rotor. Ren et al. analyzed the effects of time-delay on the stability of the rotation modes for the magnetically suspended flywheel (MSFW) with strong gyroscopic effects, and they presented an effective phase compensation method based on cross-channel [4]. However, this idea only applies the method of solving nonlinear dynamic systems without time-delay to time-delay systems; this method requires that the time-delay system is a weak linear system. Li et al. designed a simple proportional differential (PD) controller and acceleration feed-forward with an output predictor. They also produced the control law for each vibration mode in order to improve the performance of the control system [5]. The control method is mainly used in active vibration control of structures.

In a word, active balancing control of rotor is generally applied to rigid rotor with small time-delay currently. Therefore, in the current work we aimed to propose a new method to overcome the influence of time-delay on system. The main objectives of this study were four folds: (1) establish the dynamic model of flexible rotor by simplification and abstraction of high speed rotor; (2) build the Smith predictor of flexible rotor with time-delay to eliminate the influence of time-delay factor in the system; (3) design a single neuron PID control method based on Smith predictor to adjust the parameters of the PID controller adaptively; (4) validate the proposed method by the simulation.

According to the motion law of the disk, the differential equations of motion can be given:

After transformation, it can be obtained:

In the equation above, is the original unbalance, is the corrected unbalance. Using the differential operator , it is written as the form of the transfer function:

In the Eq. (6), is natural frequency, and is damping ratio of system.

Smith predictive control method is widely applied to the control of time-delay system. The basic principle is to estimate the dynamic characteristics of the control system in advance [6]. System error caused by time-delay is compensated with the predictor so that the controller can work in advance. Control system model of the single neuron PID based on Smith predictor is shown in Fig. 2. is the expected vibration of rotor, is the actual vibration of rotor, is the difference between the expected vibration and the actual vibration, is the difference between the actual vibration of rotor and reference model output, is the expected vibration of the corrected rotor, is the output of Smith predictor without time-delay, is the transfer function of actual system model, is the transfer function of prediction model, is the input of the original unbalance, is the time-delay of controller. Due to the fact that can not necessarily represent the system model exactly, the two feedback loops are designed to ensure that the control system achieve satisfactory accuracy.

Because the traditional PID controller cannot adjust the control parameters, the single neuron PID control method is proposed based on the Smith predictor in the paper. The single neuron has the advantages of simple structure, simple calculation and fast learning speed [7].

In the Eq. (8), are 3 inputs of single neuron PID controller, the 3 inputs are as follows:

In the Eq. (8), is the vibration error of the system at present, is the change of the difference, and is the first order difference of the difference. For the weights of single neuron controller, the improved supervised Hebb learning rule is proposed [8]:

In the Eq. (9), is the learning efficiency. Finally, the control law can be obtained:

Based on the Smith predictor, the single neuron PID control algorithm is proposed in the paper. The process of the algorithm is shown in Table 1. The detailed steps are as follows:

Table 1. The process of the algorithm 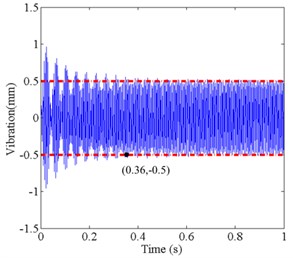 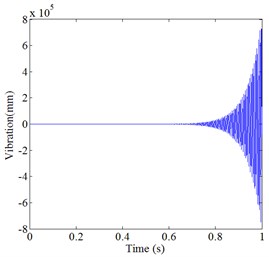 It can be seen from Fig. 4 and Table 2, the initial vibration of both methods is close to 1mm, when the time-delay is 0.001 s. However, the balancing time of the proposed control method is 0.22 s, and the balancing time of traditional Smith predictive control method is 0.36 s. In large time-delay, the proposed control method still can achieve the expected vibration, while the traditional Smith control effect is not satisfactory, and it cannot reach the expected vibration.