Copyright © 2018 Taotao Zhou, et al. This is an open access article distributed under the Creative Commons Attribution License, which permits unrestricted use, distribution, and reproduction in any medium, provided the original work is properly cited.

In order to characterize the health status of rolling element bearings, the commonly used condition indicators are [3]:

For a time sequence , the signal is mapped into the embedding space in conjunction with the delay embedding technique. If the length of the space is set to , a row column trajectory matrix can be obtained, which is:

During the degradation of the rolling element bearings health state, the vibration energy will change, and an impact signal will also appear. The RMS value characterizes the magnitude of the vibration energy. The Crest Factor and Impulse Factor characterize the impact energy of the signal and can better reflect the change of health status. Spectral kurtosis can reflect the strength of transient shock, but also can indicate the change of frequency spectrum. It can also be used to reflect the change of health status of rolling element bearings. The wavelet energy spectrum entropy and the singular spectral entropy provide an overall comprehensive assessment of the signal from a certain spatial domain. The evaluation results are dimensionless and have nothing to do with the strength of the signal. These characteristics can just meet the indicator requirements of the rolling element bearings health state assessment. 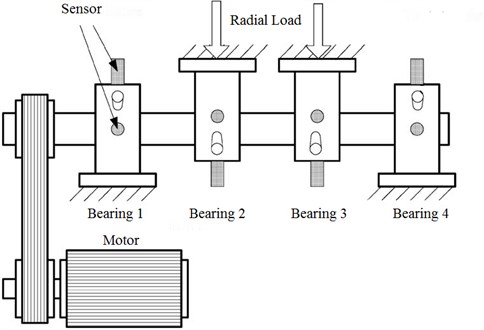 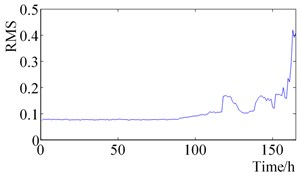 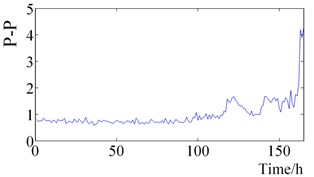 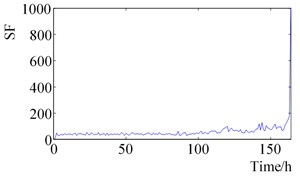 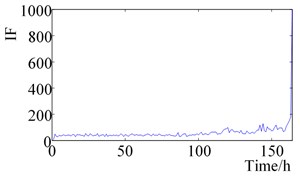 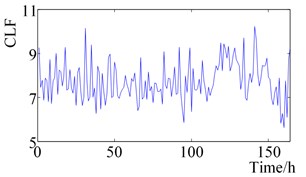 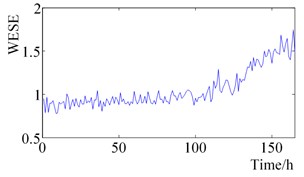 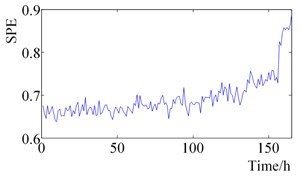 It can be seen from Fig. 2. that the RMS value and Peak-peak value increase slightly at 120 h, then remains stable until it increases slightly after 120 h, and finally increases sharply near the time of failure. Shape Factor and Impulse Factor, pre-are more stable, after 150 h began to fluctuate slightly, the final failure of a sharp increase. The Crest Factor and Clearance Factor fluctuated before 160 h, and fluctuated violently after 160 h, which reflected the change of rolling element bearing health status more than Shape Factor and Impulse Factor. Wavelet Energy Spectrum Entropy and Singular Spectrum Entropy change smooth in the bearing normal state before 100 h, and increase gradually between 100 h to 150 h, which are consistent with the change of the bearing health state.

According to the analysis of the changes of the indicators during rolling element bearing health status degradation process, the reflectivity of each index can be found based on the consistency and sensitivity:

(1) Peak-peak value and Root-Mean-Square value can reflect the normal status, rapid degradation and eventual failure. The RMS value is better than Peak-peak value in the stability.

(2) Shape Factor, the Crest Factor and the Impulse Factor do not reflect the initial degradation, which couldn’t effectively reflect the failure occurrence and status degradation.

(3) Wavelet Energy Spectrum Entropy and Singular Spectral Entropy can be used to characterize the change of health state of rolling element bearing. The change of indicators has a good consistency with the degradation process.

This work was supported by the National Natural Science Foundation of China (NSFC) under Grant No. 61703385.