Centrifugal pump fault detection based on SWT and SVM

Copyright © 2018 Yu Chen, et al. This is an open access article distributed under the Creative Commons Attribution License, which permits unrestricted use, distribution, and reproduction in any medium, provided the original work is properly cited.

Centrifugal pumps, like other rotating equipment, produce vibration signals during operation. Vibration signals often contain pump state information. Therefore, we can obtain pump state information by using appropriate signal processing methods. Synchrosqueezing wavelet transform (SWT) is a new time-frequency analysis technology. It is an algorithm for rebuilding time-frequency signals, which is similar to the empirical mode decomposition method. It can improve the time-frequency resolution of the signal compared with wavelet transform. In this paper, the SWT is used to analyze the vibration signal of centrifugal pump and extract characteristics. The data shows that the SWT can effectively extract the information of signal in time domain and frequency domain. Then we use the Support Vector Machine (SVM) to classify the features and realize the fault diagnosis of centrifugal pump. The result proves that the fault diagnosis method based on the SWT and SVM.

Rotary machinery plays an important role in modern industrial production. Once the rotary machinery at key parts lose effectiveness, it will lead to serious consequences. Therefore, in the use of such machinery, the situation of failure needs to be taken seriously. Rotary machinery fault diagnosis technology is widely concerned in the current study. In order to realize the condition-based maintenance, it is the goal of the researcher to find out the fault as early as possible.

2. Detection method based on SWT-SVM

Synchrosqueezing wavelet transform is a new time-frequency signal analysis method proposed by Daubeche in 2011 [7]. By redistributing the wavelet coefficients, the signal energy in the spectrum is gathered near the real frequency, which improves the resolution of the signal in time-frequency.

For , its Fourier transform can be expressed as:

where the represents the angular frequency. The reverse transformation of is:

Thus, the signal can be expressed as the sum of a set of harmonics with different frequencies, as in Eq. (3):

The continuous wavelet coefficients of a single harmonic signal are obtained by wavelet transform as follows:

If the main frequency of the parent wavelet is , then theoretically the transformed will approach in the time-scale plane. In fact, the wavelet coefficients are divergent on the scale, which makes the time-frequency spectrum of the wavelet transform relatively fuzzy. For arbitrary and , the instantaneous frequency is calculated as follows:

The continuous calculation formula is as follows:

Support Vector Machine (SVM) is a supervised learning algorithm, which is widely used in data classification and discrimination problems. SVM can effectively solve the problem of two-class classification by finding the best separation hyperplane in the feature space to maximize the interval between positive and negative samples on the training set. In order to solve the nonlinear problem, kernel function is introduced into SVM.

SVM for nonlinear classification is generally divided into two steps:

1. A nonlinear map is used to transform the data in the low-dimensional space X into a high-dimensional feature space F.

2. The linear classifier is used to realize the classification in the high-dimensional feature space F.

is the mapping from space X to space F, but the explicit representation of the nonlinear mapping is difficult to reckon. Since the dual form is a property of SVM, the classification decision rules can be represented by the inner product of the test set and the training set:

Select a kernel function , map the data to a high-dimensional space F, find the optimal separation hyperplane in space F, and distinguish the non-linear data: 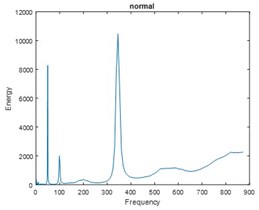 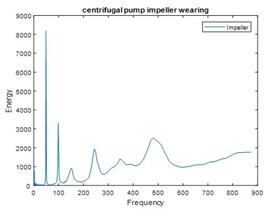 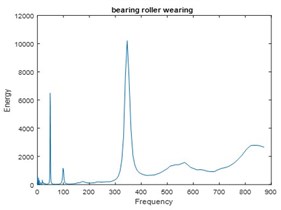 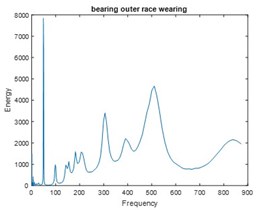 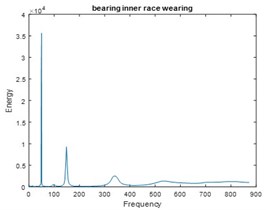 Given that the frequency domain characteristics of different vibration signals are quite different in the fixed frequency band, the energy of each peak part of the spectrum graph is selected as the feature. Through dimension reduction, 12000 sets of three-dimensional feature sets were obtained, including bearing roller wearing, bearing inner race wearing, bearing outer race wearing and centrifugal pump impeller wearing. There are also 2400 feature sets under normal conditions. The distribution of feature sets in three-dimensional space is shown in Fig. 3. Notably, feature sets corresponding to different states can be clearly distinguished.

SVM is chosen as classifier in this experiment. The feature set is divided into 10000 training sets and 2000 test sets, in which the training set is used to train the SVM network. After the training, we input the test sets data into classifier. Comparing the predicted values of the model output with the true values, we can get a prediction accuracy of 93.8 % for the network. The forecast result is shown in Fig. 4.

Fig. 4. The forecast result of SVM 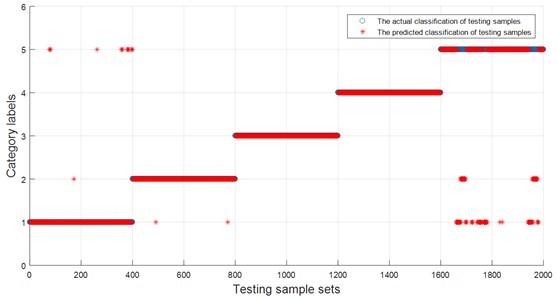 A fault diagnosis method of centrifugal pump based on SWT and SVM is presented in this paper. First, the vibration signal of centrifugal pump is analyzed by SWT. And the time-frequency spectrum of the signal is obtained. The SVM algorithm is used to classify different types of features. In the process of classification, some features are randomly selected to train the SVM model. When the model is trained, the feature of the unmarked fault mode is taken as the test set, which is used as the model input. And the predicted value of the test set state is used as the model output. The output of the model is a predictor of the state of the test set. Comparing the predicted value of centrifugal pump state with the actual value, we can see that the prediction accuracy of the model reaches 93.8 %. The result shows that the fault diagnosis method based on SWT and SVM can identify different fault modes with high success rate, which is helpful to realize the condition monitoring of centrifugal pump.