Copyright © 2018 Tong Zhang, et al. This is an open access article distributed under the Creative Commons Attribution License, which permits unrestricted use, distribution, and reproduction in any medium, provided the original work is properly cited.

It is of significance to monitor the operating status of rolling bearings. In order to obtain degradation of bearing performance timely and predict its trend, this paper proposed a bearing health state assessment method based on Mahalanobis distance metric and a prediction method based on echo state network. By designing degradation experiment and applying the proposed method to analyze the data, the performance degradation curve of the bearing and its prediction curve were obtained, and the experimental results verified the effectiveness of the method.

Rolling bearings are very common mechanical component part and key element of the mechanical equipment. The principal objective of a rolling bearing application is to support the load from rotating shaft and reduce friction between the rotor-stator. It plays an important role in a number of industrial applications [1]. When the rolling bearing has an initial failure, it is usually not necessary to stop the equipment for maintenance, but it is important to monitor its subsequent operating status. If the bearing is detected to be in a severe fault condition, the equipment needs to be shut down and the bearing replaced in time to prevent serious damage due to bearing failure. Therefore, exploring effective bearing performance degradation assessment methods can help reduce equipment downtime, and can avoid economic losses and catastrophic accidents caused by bearing failure [2].

Many researches have been done by scholars to study the problem of the rolling bearing’s degradation. In previous studies the authors have shown that SOM (Self-organizing Maps), GMM (Gaussian Mixture Model), etc., can identify the different working conditions of rolling bearings [3, 4]. Meanwhile, traditional ANN (Artificial Neutral Network), BP (Back Propagation) and Elman models have been widely used in the field of intelligent prediction of rotating machinery [5-7]. But some of the methods mentioned above are complex and time consuming, such as GMM, meanwhile, some are too simple to get approving results, like BP, etc.

Applying the signal characteristics of rolling bearing degradation, in this paper, an approach for rolling bearing health assessment and life prediction, MD (Mahalanobis Distance)-ESN (Echo State Network), was proposed. The MD is a statistical distance that provides an indication of similarity or nearness between two sets of samples. What’s more, the MD is independent of the scale, considering the relationship between the data, and the corresponding weights can be automatically generated by the covariance, and the inverse is used to offset the weights [8]. We employ ESN on time series vibration signals of rolling bearing, which overcomes the problem that traditional ANN is easy to fall into local extreme value. Elman neural network and BP neural network both have the strong abilities of knowledge acquisition and fault tolerance, however, there are phenomena called over-fitting often occurred on these two methods. In addition, the physical meaning of traditional ANN prediction model is difficult to explain, and its training process and time are long. The reasons above induct its poor generalization ability. Given the above, compared with these traditional artificial neural networks, ESN is improved in nonlinear system identification to an large extent [9].

This paper is organized as follows. In Section 2, the combinatorial method of MD and ESN are presented. In Section 3, the bearing test data are taken from the Bearing Prognostics Simulator (BPS) and the proposed method meets the demand of prediction accuracy, robustness and effectiveness. General conclusions are illustrated in Section 4.

For vibration signals, the flow path of proposed method was shown in Fig. 1, and it can be divided into two parts.

Firstly, the vibration signal of the normal operation of the bearing and the vibration signal under the degraded state are obtained through the bearing degradation test. In order to construct a characteristic signal, the appropriate characteristics of the two vibration signals are extracted. Then Mahalanobis distance algorithm is employed to measure the distance of the two feature sequences. Finally, the obtained Mahalanobis distance is normalized to the confidence value, which means setting the CV value of the normal state to 1, and setting the state of unacceptable or repairable to 0. The normalized rule can be adjusted according to the actual situation.

After that, using the performance degradation curve obtained by health assessment to train the ESN, then get the prediction curve, which characterizes the health trend of the bearing in the period ahead.

Fig. 1. The procedure of the proposed methodology

The Mahalanobis distance is calculated as follows:

(1) Calculate the average of each feature vector:

(2) Calculate the standard deviation of each feature vector:

(3) The feature vector is orthogonal to get , then transpose :

(5)The Mahalanobis distance is:

After getting the vibration signal by the sensor and extracting the feature, the characteristic points of the bearing under normal conditions are obtained. They are assumed to be , ), …, ). are applied to construct the Markov space on normal conditions as the basic standard of bearing health.

Assuming that the bearing is in operation, we acquire a residual sequence randomly and extract the features. The feature points are , , …, , …, . The distances , ,…, between the respective state points and the standard Markov space are sequentially calculated.

The normalized algorithm in this paper is as follows:

where is the normalized parameter, and is set to a different parameter value, then the sensitivity of the corresponding CV value to the fault trend of different fault stages will change, so that the evaluation model is adjusted according to the actual situation and needs.

After constructing the Markov space according to the data in the normal state of the bearing, the feature points in the state to be evaluated of the device are obtained. For each evaluation, only one calculation is needed to realize real-time evaluation, and finally the single evaluation result forms a CV value curve to describe the trend of deterioration of the bearing's health performance over a period of time.

The internal state update equation of the reserve pool is as follows:

We employed the Bearing Prognostics Simulator of Beihang PHM Lab to conduct the test of bearing degradation, and the working condition was set to a constant speed of 2000 rpm. In addition, the test was set a constant load in order to shorten the time of bearing performance degradation. The vibration sensors were respectively attached to the vertical and horizontal directions of the bearing, and the sampling frequency was set to 10 KHz. As a consequence, the vibration data, which contained 520 K points each group (20 groups in total), were collected as data sources. 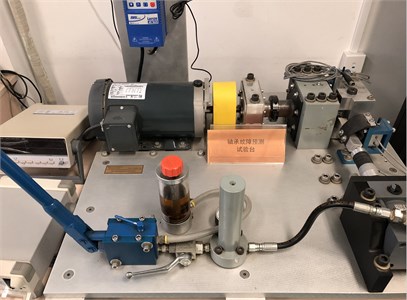 In order to facilitate the data analysis, taking comprehensive account of the rotational speed and the sampling frequency, we made the data 500 points per group and extracted the eigenvalue time domain features to construct the eigenvectors of all the data. Using the non-degraded data as a normal reference, the calculated Mahalanobis distance was normalized to a CV value between 0-1. The health assessment results based on Mahalanobis distance were shown in Fig. 3. 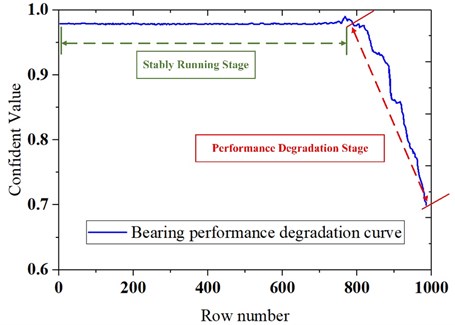 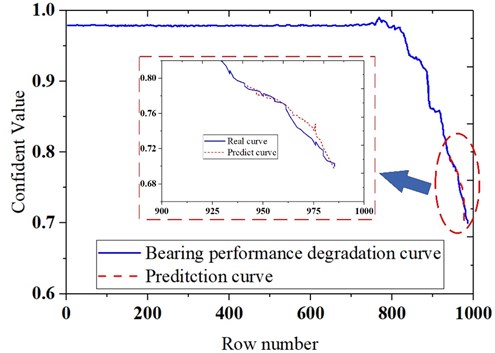 The decay section in the CV curve obtained by the health assessment was regarded as a training sample of the ESN network. In order to verify the accuracy of the prediction, the first 70 % of the performance degradation curve was employed as a training sample, then the predicted curve was compared with the actual curve, as shown in Fig. 4. The MAPE (Mean Absolute Percentage Error) between the actual value and the predicted value was calculated, and the obtained MAPE value was about 14 %, which showed that the method had favorable accuracy.