Copyright © 2018 Xueyi Li, et al. This is an open access article distributed under the Creative Commons Attribution License, which permits unrestricted use, distribution, and reproduction in any medium, provided the original work is properly cited.

Gearboxes are a common transmission component in industrial machines. Gearpitting is one of the most common faults of a gearbox. The gear pitting fault level diagnosis would have a significant impact on the reduction of the maintenance costs.

The traditional gear fault detection method mainly relies on the manual extraction of features to train the network. A new narrowband interference cancellation method was used to suppress the narrowband component and enhance the pulse component, making gear fault detection easier [1]. By sorting effectiveness scores, Liu et al. [2] proposed criterion was validated by the University of California Irvine benchmark datasets and are also applicable to the pitting diagnosis of planetary gearboxes. Although manual extraction features can make a diagnosis, a large amount of prior knowledge was required as a basis. Moorthy et al. [3] observed that micro-cracks tend to take precedence over the micro-valley on the surface of the ground gear against the sliding direction, especially when the depth of the micro-valley was advantageously oriented at an angle relative to the sliding direction. Many detection methods used frequency domain signals for training. Feng et al. [4] observed that the amplitude envelope and instantaneous frequency of the planetary gearbox vibration signal were related to the characteristic frequency of the faulty gear, a joint amplitude, and frequency demodulation method was presented for the fault diagnosis of the planetary gearbox. Although the frequency domain signal can better reflect the pitting fault characteristics of the gear, the conversion from the time domain to the frequency domain requires additional time and computational cost.

The main content of the paper is arranged as follows. Section 2 elaborates on the modified inception algorithm. In Section 3, the description of the gear seeded pitting fault test experiment used to validate the presented method is provided. Section 4 analyzes and discusses the experimental results. Section 5 summarizes the paper.

Fig. 1. The general procedure of the presented method 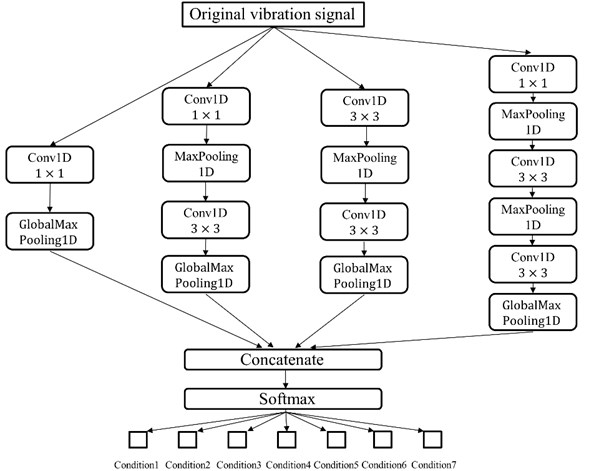 The gear pitting fault diagnosis experiment was carried out in a gearbox test rig as Fig. 2. It consisted of two 45 kW Siemens servo motors, one of which acted as a drive motor and the other could be configured as a load motor. The test gearbox is a single stage spur gearbox. The main gear parameters are shown in Table 1.

Table 1. The primary parameters of the gearbox rig

The sample vibration signals of the 7 pitting gears were shown in Fig. 4. The gears were mounted symmetrically, so the radial is the main through vibration direction. Furthermore, the stiffness of the gearbox along the vertical direction to the ground is smaller than the other axes. In this paper, the -axis signals were used for analysis. The sampling length of signal is decided by the rotating speed to ensure the gear revolution information included in each sample.

The data were processed and analyzed on Windows 10 operating system with Intel Core i5-6500 processor, NVIDIA GTX 1080Ti graphics card, and Kingston 16GB memory. The software used in the experiment include MatLab R2018a, Python 3.6, CUDA 8.0, and cudnn 9.2. 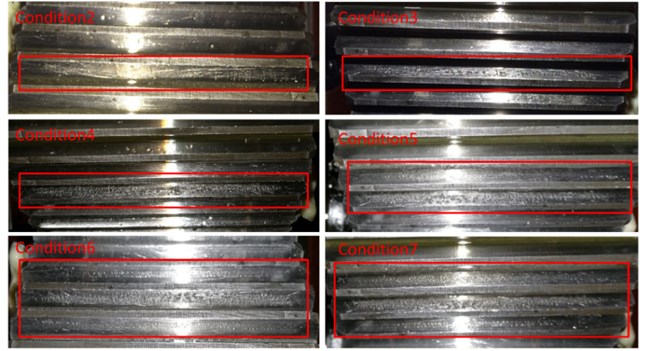 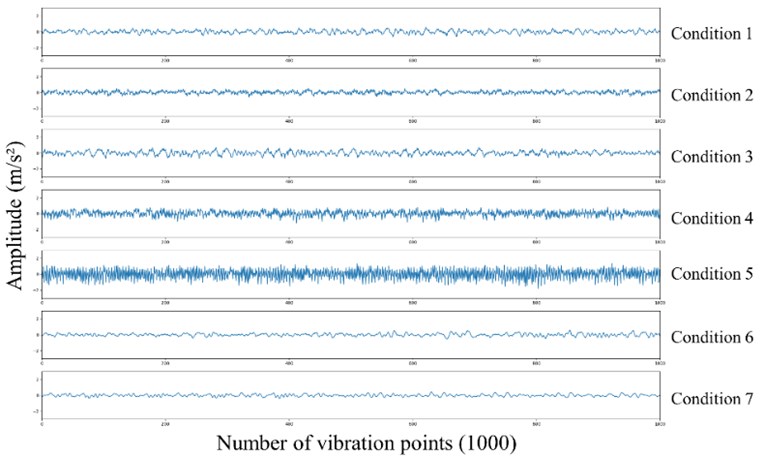 4. The results and discussions

The gear raw vibration data in the experiment was used for training. The results are shown in Table 3. The method proposed in this paper has a significant improvement on the detection of gear pitting failure compared with the application of convolutional neural network only. The accuracy of the testing set can be reached. 98.9 %, while CNN can just reach 73 %. The method presented in this paper can effectively avoid the over-fitting problem generated in the deep learning process. For the diagnosis results of each type of gear pitting failure, as shown in Table 4, it can be seen that five types of gears have been correctly diagnosed, and the other diagnosis results of the two kinds of pitting wear gears are all above 95 %. It embodies the effectiveness of the presented method for gear wear fault detection.

The accuracy curve and loss curve of the presented method are shown in Fig. 5. It can be seen from the figure that the accuracy of the model is stable after 150 epochs, and there is no obvious inflection point in the curve. The confusion matrix results of this test set are shown in Fig. 6. As can be seen from the figure, for Condition 2, a pitting gear was misidentified into the Condition 4. For Condition 3, two pitting gears were misidentified into the Condition 2. It can be seen from Fig. 3 that the gears of these three states are indeed very close, considering that the vibration signal of the gearbox is also affected by the external environment.

The classification result of the training set used t-SNE to reduction dimensionality. As shown in Fig. 7, it can be seen from the figure that the gears of the seven pitting conditions are clustered. There were having obvious boundaries and almost no coincidence, indicating that the method proposed in this paper has a good classification effect on the wear fault detection of gears.

Fig. 5. The comparison of accuracy and loss between the training set and the validation set 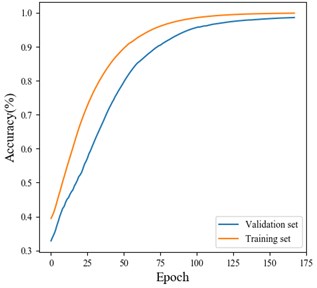 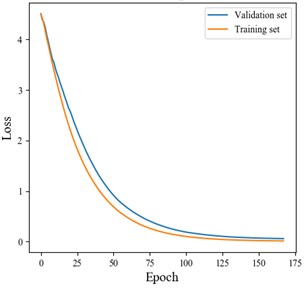 Fig. 6. The confusion matrix by the presented algorithm for the testing set 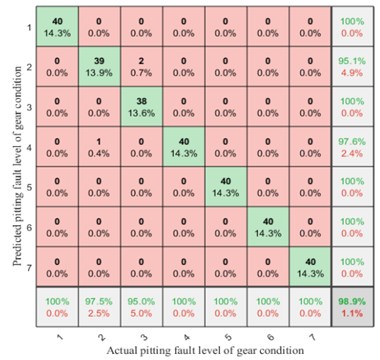 Fig. 7. The visualization of three-dimensional features of gear pitting conditions 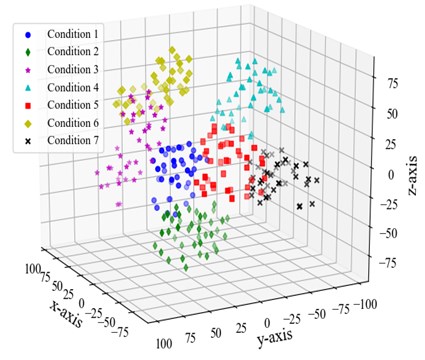 Table 3. The accuracy comparison between the presented algorithm and the CNN