Copyright © 2019 Juraj Králik, et al. This is an open access article distributed under the Creative Commons Attribution License, which permits unrestricted use, distribution, and reproduction in any medium, provided the original work is properly cited.

This paper describes the soil-structure interaction (SSI) effects to the Nuclear Power Plant (NPP) structure with reactor VVER-1200/491 PWR. The simplified 1D and numerical 3D FE models of the layered subsoil are investigated. The methodology of the calculation of the frequency dependent complex functions of the soil stiffness and damping is presented.

After the accident of nuclear power plant (NPP) in Fukushima the IAEA in Vienna adopted a large-scale project “Stress Tests of NPP”, which defines new requirements for the verification of the safety and reliability of NPP. Based on the recommendations of the ASCE standard [1] and IAEA in Vienna [2, 3], the effective seismic resistance of objects is assessed in PGA sites up to 0.3 g according to the “Seismic Margin Assessment” methodology (SMA) [4].

The required methodology was based on a reference earthquake (RLE) or a “Seismic Margin Earthquake” (SME) earthquake, which is an earthquake with seismological parameters of a given site and response spectrum at the free terrain level corresponding to 84.1 % probability of non-elevation (median overs), including Peak Ground Acceleration (PGA) for a given acceptable annual occurrence probability (typically 10-4/year). The dynamic soil-structure interaction can sometimes modify significantly the stresses and deflections of the whole structural system. Hence, the following problems should be considered in the dynamic soil-structure interaction models:

1. Radiation of dynamic energy into the unbounded soil;

2. The hysteretic nature of soil damping;

3. Separation of the soil from the structure;

4. Possibility of soil liquefaction under seismic loads; and

5. Other inherent nonlinearities of the soil and the structure.

2. Stiffness and damping soil parameters in the subsoil

Dynamic soil characteristics are obtained with sufficient accuracy from the refractive and reflexive survey of a given site [5-9]. Depending on the propagation rates of the longitudinal and transverse waves in the soil, we can determine its physical characteristics [5, 8, 10]. The basic rigid parameter characterizing the earth body for dynamic calculations is the dynamic (or Young’s elastic modulus modulus):

In the case of earthquakes, there is a large movement of the soil, and because of plastic deformation, the value of the dynamic soil module also drops. According to the recommendations of international standards, this reduction will maximally reach 65 % of the dynamic module measured for small seismic events. The process of the shear modulus and the damping can be seen in Fig. 1 depending on the shear strain [8]. 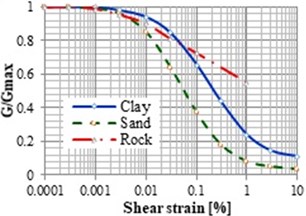 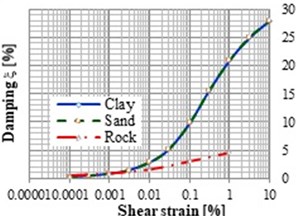 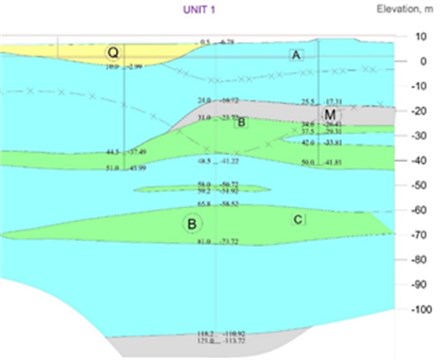 Table 1. Comparison of parameters, determined with the use of different methods [11]

3. Simplified model of the global subsoil stiffness and damping under foundation plates

The dynamic stiffening characteristics of the subsoil depend not only on the physical and mechanical properties of the soil, but also on the shape and depth of the base structure [5, 10, 12-19]. Some authors consider the soil stiffness of rectangular foundation by the equivalent diameter of circular plate:

The rectangular foundation plate with the dimensions in plane . has plate area . . The stiffness intensity of soil is equal to (, , , ), when is the global soil stiffness.

a) The global soil stiffness under rectangular plate according to ASCE4/98 [1] are defined as follows:

where axis and are in the horizontal plane and is in vertical direction, , are the coefficients depended on the ratio , rotated coefficient for (e.g. for ) (see Fig. 3). 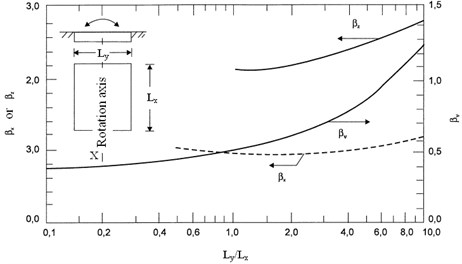 b) The global soil stiffness under rectangular plate according to Pais and Kausel [10] and considering the homogeneous half space and the ratio of the base dimensions () are defined as follows:

c) The global soil stiffness under rectangular plate according to Gazetas [5] for the rigid block and elastic half space are defined as follows:

In the case of the layered subsoil, the equivalent material characteristics can be determined from the 1D model on the base of the theory of the series springs. The standard ASCE4/98 [1] require using 3 level of the soil stiffness – lower, mean, higher. The ratio between these models is equal to 1.5. It is equivalent to the uncertainties of the soil stiffness and damping due to simplified calculation models (see Tables 2 and 3).

For most common structures, the effect (SSI) of the structure-substrate interaction will be more advantageous as it reduces the effect of bending moments and shear forces on individual structural elements. The effect of the dynamic soil-structure interaction must be considered for all foundations [5, 6, 10, 16, 20]:

The effect of foundation depth is considered when an object is laid at a depth greater than 6m.

The direct method of the design and substrate interaction consists of the solution of the following tasks:

• Localize the contact between the structure and the subsoil,

• Define the seismic load at the level of the base joint,

• Create the calculation model subsoil, its properties, soil layering under the foundation,

• Carry out the interaction in one or two steps,

If the direct method is considered, the stiffness and attenuation of the substrates can be modelled as a set of independent springs or, in more detail, based on the finite element method.

The impedance function method [9, 20] consists of the following steps:

• Determine the seismic load assuming a rigid base,

• Determine impedance functions for given foundations,

• To analyse the interactions between the structure and the base.

The impedance functions define the dependence of stiffness and subtle stress on the substrate based on frequency. It is assumed that the harmonic force is applied to the rigid base deposited on the flexible half-frame. Such a computational model. assuming linear behaviour. provides a better understanding of the properties of the underlying behaviour. depending on the actual frequencies of the structure itself.

In the case of a simple base model and substrate. the impedance functions are determined by the ratio of the harmonic force acting on the rigid base to its displacement in the shape:

where (resp. ) represent the stiffness (resp. attenuation) of the substrates, is the weight of the base, is the circular frequency (see Fig. 4).

Fig. 4. Calculation model of base with mass m and without weight 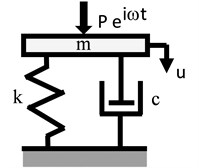 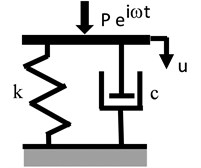 For complex foundation geometries or soil conditions, the dynamic soil impedance can be determined by dynamic analysis of a three-dimensional or two-dimensional continuum model of the soil-foundation system. The six steps can be implemented using the finite element (FE) method [21, 11, 18, 22]. In this case, the soil is modelled as an elastic or viscoelastic material, which can be considered isotropic, anisotropic, homogeneous or nonhomogeneous. In a FE model, only a portion of the soil (i.e., a soil island) can be discretized; therefore, appropriate boundary conditions (non-reflective boundaries) must be applied where the soil is arbitrarily truncated. The response of a rigid foundation to static or dynamic load arises solely from the deformation of the supporting soil. The static soil stiffness () is used to model the soil-foundation response to static load. In an analogous manner, the dynamic soil impedance/stiffness () is used to model the soil-foundation response to dynamic loads. In particular, six dynamic impedances are required, three translational and three rotational, to formulate the dynamic equilibrium equation of a rigid foundation. These impedances are a function of the foundation geometry, the soil properties and vibration frequency of the dynamic loads (, ).

The procedure used to calculate the dynamic impedances of a rigid surface foundation can be summarized in the following steps:

1. The foundation can be modelled as massless and infinitely rigid; therefore, only the geometry of the area in contact with the soil is required. The use of a massless foundation is important since it avoids the need for recalculating the dynamic impedance every time that the foundation mass changes, which often happens during the design process.

2. A harmonic force or moment of frequency and of unit magnitude is applied to the rigid foundation []. Such force/moment generates stress waves that propagate into the underlying soil, which is modelled as a viscoelastic material.

3. The steady state vibration amplitude [ or ] of the foundation under the harmonic force is obtained by keeping track of the reflections and refractions that take place every time that the stress waves reach a soil layer boundary.

4. The dynamic impedance is defined as the ratio between the harmonic force acting on the foundation and its vibration amplitude as shown in Eq. (7). It must be noted that this is a frequency dependent complex quantity:

5. In soil dynamics, it is customary to express the complex dynamic impedance. In addition, the real and imaginary parts of the dynamic impedance are associated, by analogy, with a dynamic (frequency dependent) spring and dashpot as shown in following equations:

Steps 2 to 5 are repeated for each frequency of interest, until the range of vibration frequencies of the machine is covered.

The presented methodology was used for the analysis of the soil-structure interaction of the NPP main building with reactor VVER1200 which was situated in the complicated subsoil area [11]. The dimension of the reactor building is 83.8 m×78 m in plane and 74.9 m in high. The thick of the foundation plate is equal to 2.65 m. The total building masses and the gravity centre position is following – Mass = 351 ton, –0.304 m, 0.205 m; 22.08 m. The dynamic characteristics of the layered subsoil were determined by the experimental investigation of the region. The mean value and the standard deviation of the shear velocity for the 30 m depth are following – (mean) = 1069 m/s, (st.dev) = 96 m/s.

The subsoil around the NPP main building VVER-1200/491 PWR is modelled by solid elements SOLID185, the foundation plate by shell elements SHELL181 and surface around soil block by elements SURF154 in the software ANSYS (see Fig. 5). 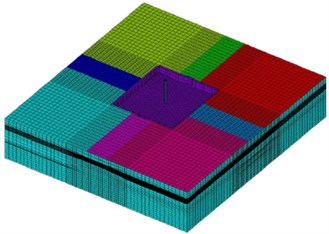 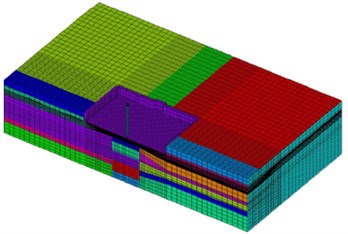 On the base of the methodology presented in chap. 6 the impedance functions for the NPP main building VVER-1200/491 PWR considering the real layered subsoil properties determined by experimental testing of the subsoil were calculated on FE model in software ANSYS (see Fig. 6). The impedance functions shape in Fig. 6 are not simple and continuous functions as in the case of the analytical solutions of the impedance functions of the rigid plate on layered soil [18]. The layered properties of the soil under rigid plate and the discretisation of the subsoil using FE Model with the solid elements give us more detailed information’s of the dynamic soil-structure interaction effects. The global stiffness and damping properties depend on the geometry and material properties of the soil under the rigid rectangular plate.

Fig. 6. Real and imaginary part of the global impedance functions for translation 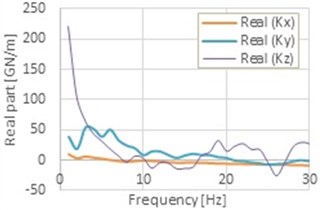 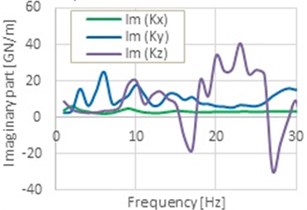 This paper describes the soil-structure interaction effects in the case of the NPP main buildings with reactor VVER-1200/491 PWR during earthquake excitation. The methodology of the calculation of the impedance functions were considered [11]. The dynamic impedance is defined as the ratio between the harmonic force acting on the foundation and its vibration amplitude. The results from the 3D FE analysis show as that the impedance functions are not smooth functions in case of the layered subsoil with various material properties as in case of the homogeneous subsoil.