Copyright © 2019 Velumani V, et al. This is an open access article distributed under the Creative Commons Attribution License, which permits unrestricted use, distribution, and reproduction in any medium, provided the original work is properly cited.

Sound and vibration caused in the engine due to combustion process may affect the users. One of the vital qualities of diesel fuel is high sound and vibration. The vibration of the engine is one of the primary factors in engine structure and maintenance. Vibration estimation on the engine block, cylinder head is a non-intrusive strategy and has been utilized effectively for fault prediction of diesel engines. The vibration signals along with signal processing techniques are utilized to highlights the features that are sensitive to faults. In this work, experimental tests have been carried out to assess the vibration of a diesel engine with diesel, 20 % biodiesel (Ethyl Ester of ground nut acid oil EEGOA) and 30 ppm Multi-walled Carbon Nano tubes with 20 % biodiesel (MWCNT30ppm B20EEGAO) at various load (20 %, 40 %, 60 %, 80 % and 100 %). Digital Vibration Meter Model: Equinox-VM 6360 is utilized to gauge the vibration in three unique positions, one is cylinder head of the engine, second one is crank of the engine, and third one is bottom of the engine. In this work, the vibration is measured in terms of acceleration. The MWCNT30ppm B20EEGAO blend demonstrates the lower vibration compared with different blends.

Jindal [6] analyzed on employing the vibration signatures on the engine cylinder and engine head. He analyzed the effect of vibration in an engine fueled with both diesel and biodiesel blends. The analysis was carried out by varying the compression ratio and injection pressures. The results proved a noteworthy effect in the vibration output and the variation is used to evaluate the long term effects. His research focused on essential relationship between the engine vibration pattern and the combustion process under diverse operating conditions. AhmadTaghizadeh Alisaraei et al. [7] in his work used a single differential tractor with four stroke and six cylinder engine for evaluation. The vibration analysis was carried out for biodiesel and various biodiesel blends. Statistical analysis of the experimental result depicts that the measured value of vibration was least for B40 and B20. Furthermore, the biodiesel blends B15, B30 and B50 recorded the high values in vibration. Also, the results derive that, at various engine speeds, vibration remains consistent with power torque curve. Wongchai et al. [8] considered the application of an engine block vibration transducer. The focus of his work was to achieve a real time management of the control unit using the vibration signal as a response to accurate the injection parameters. They experimented on a tiny displacement two cylinder common rail diesel engines fueled with various biodiesel blends. Ftoutou Ezzeddine and Mnaouar Chouchane [9] focused on vibration analysis for early detection of fuel injection faults in an internal combustion diesel engine with six cylinders in line. The result shown the cylinder head are shown to be useful for the detection of injection faults.

A significant part of the research in the literature of bio diesel center around the engine performance estimated through thermal efficiency, power output, specific fuel consumption, emissions, etc. The long term impacts are yet to be examined. The unpredictable ignition inside the combustion chamber brings about knocking and results in harm to the ignition chamber and cylinder head [10, 11]. This makes the engine to vibrate, all the more prompting early failure of structures and parts. Subsequently to envision the prerequisites and nature of burning in the cylinder of CI engine, vibration signature may give a solid diagnostic tool. The vibration caused in any machine because of its moving parts is for the most of low frequency [12, 13]. On occasion high frequency vibrations are likewise present in IC engine because of unusual combustion of charge. Vibrations delivered in diesel engine are predominantly in two ways, vibrations in lateral direction and vibrations in longitudinal way. The cylinder affect on the chamber liner is known as cylinder slap. The cylinder slap is the wellspring of vibrations sidelong way. Lateral vibrations drives results in more prominent wear of cylinder and liner surface and this wear impact is more contrasted with longitudinal vibrations [14, 15].

The vibration analysis was carried out in the kirlosker TV1 engine. The specification of the engine is as shown in Table 1. The Fig. 1 shows the experimental arrangement. The eddy current dynamometer was used as a loading device. The loading device was controlled by the control panel. The experiments were conducted at constant speed at 1500 rpm. Experimental tests have been carried out to evaluate the vibration of a diesel engine when fueled with diesel, 20 % biodiesel (Ethyl Ester of ground nut acid oil EEGOA) and Multi-walled Carbon Nano tubes with 20 % biodiesel (MWCNT30ppm B20EEGAO) at different load (20 %, 40 %, 60 %, 80 % and 100 %). The biodiesel was obtained from by-product of vegetable oil refinery industry waste of Ground nut Acid Oil in transesterification process with ethyl ester of ground nut acid oil. The vibration of the engine was measured at three different position such as engine head, engine crank and engine bottom. The vibration was measured by using digital Vibration Meter Model: Equinox-VM 6360. In this research, a portable model of vibration meter is used to measure the vibration of small machine. It exploits an external accelerometer and magnetic base to improve frequency response and provide a more repeatable vibration reading. 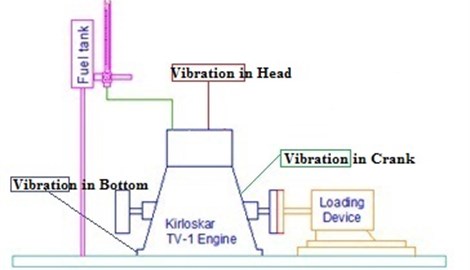 The results and discussion are carried out in analyzing the engine vibration with diesel, B20EEGAO and B20EEGAOMWCNT30ppm. The engine vibration is measured in terms of acceleration. The measurement of knocking in the combustion chamber is very more complex. The knocking is measured by combustion parameters. The combustion parameter is usually measured using pressure sensor and by making a hole in cylinder head, which is very complex and costliest method. So, in our analysis, the signal analysis is used to measure the combustion status in combustion chamber of engine without affecting the cylinder head. In this experiment, vibration signal is used in terms of acceleration. For this experimental analysis conducted, the engine was subjected to run for 30 minutes for each load. The vibration is measured during this run time of 30 minutes. The graphical representations are given in Fig. 2-Fig. 19 for the peak vibration noted for each load. The graph drawn is for only 10 seconds that accounts for peak vibration to happen.

Fig. 2. Time vs acceleration (diesel head in all load) 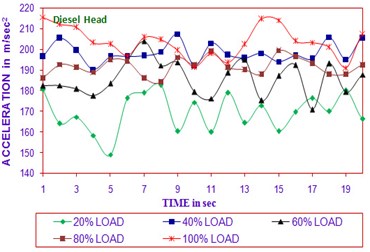 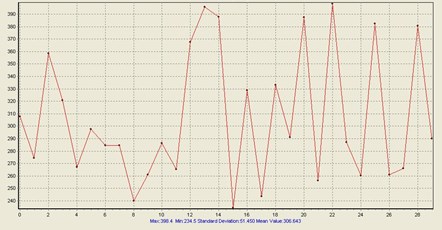 Fig. 4. Time vs acceleration (diesel crank in all load) 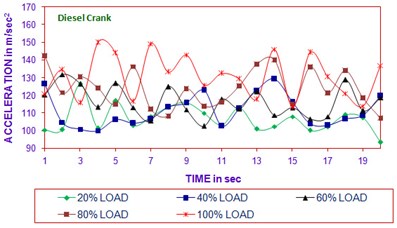 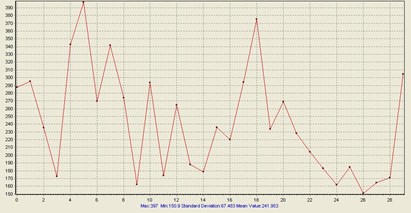 Fig. 6. Time vs acceleration (diesel bottom in all load) 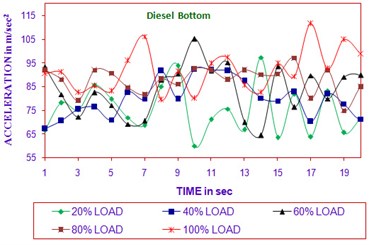 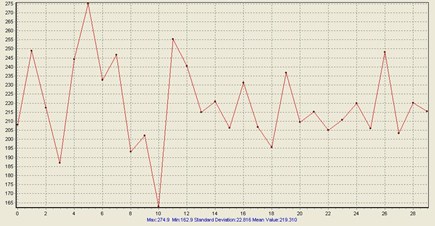 With the evaluation of vibration values from Figs. 8 to 13, it is observed that in biodiesel (EEGAO) with blend of B20 in three different place of the engine such as head, crank and bottom. Load at 20 % shows minimum acceleration in B20 blend. In Table 2, for bottom, minimum acceleration is noticed at 20 % load and maximum at 100 % load compared to both of the head and crank. This may due to variation of cylinder pressure inside the combustion chamber. Also, rapid variation and oscillation of cylinder pressure in combustion chamber are lower in B20 blend compared to other blends, thus leads to lower acceleration. The maximum acceleration is attained at head of the engine for biodiesel while compared to the crank and bottom. This is due to combustion taking place in cylinder head [17, 18]. In combustion chamber, rapid variation of cylinder pressure results, showed the peak acceleration in head position. The combustion of the fuel inside the cylinder depends on different constraint such as physical properties and chemical properties (flash point, fire point, cetane number and viscosity). The lower vibration is found at 20 % load in B20EEGAO blends in all position. As the load increases air fuel ratio reduces, this leads to incomplete combustion in combustion chamber [19]. In complete combustion, the vibration of the engine is noted. As the diesel quantity in the blends increases, the quantity of fuel taking part in the uncontrolled combustion stage of the mixture reduces, which results in a better pressure rise. It is concluded that low viscosity, more oxygen content and good volatility of B20EEGAO blend, lead to good atomization and mixture preparation with air during the ignition period. The vibration in head position in the diesel engine depends upon the combustion rate in the initial stages. The mean acceleration in head was 235.7 m/sec2 for B20EEGAO blend, mean acceleration in crank was 141.10 m/sec2 for B20EEGAO blend, and mean acceleration in bottom was 92.18 m/sec2 for B20EEGAO blend at 20 % load.

Fig. 8. Time vs acceleration (B20EEGGAO head in all load) 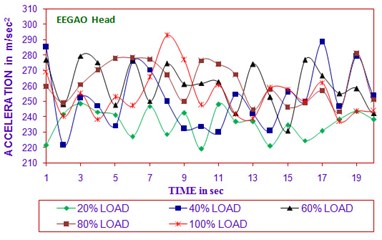 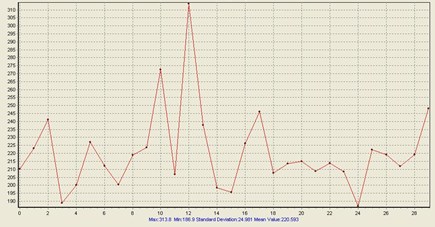 Fig. 10. Time vs acceleration (B20EEGAO crank in all load) 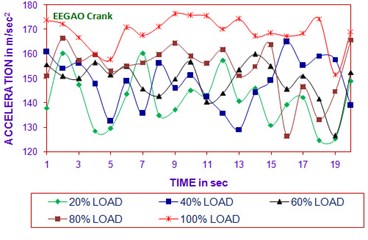 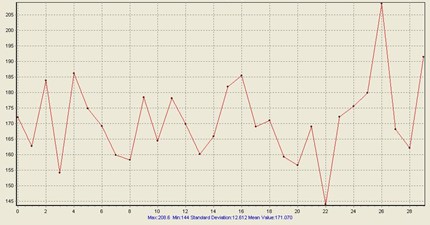 Fig. 12. Time vs acceleration (B20EEGAO bottom in all load) 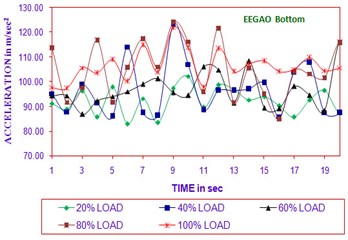 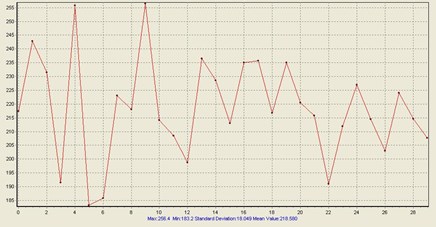 With the evaluation of vibration values from Figs. 16 to 19, it is observed that for four different biodiesel (MWCNTB2030ppmEEGAO) in different load (20 %, 40 %, 60 %, 80 % and 100 %) with three different place of the engine such as head, crank and bottom. The acceleration is minimal in the MWCNT30ppmB20EEGAO at 20 % load compared to other blends. The mean and maximum vibration values are listed in table 2. For bottom, the lower acceleration is noticed at MWCNT30ppmB20EEGAO at 20 % load and maximum at 100 % load.

Fig. 14. Time vs acceleration (MWCNT30ppmB20EEGAO head in all load) 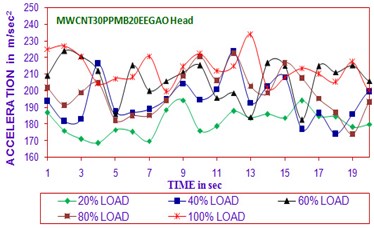 Fig. 16. Time vs acceleration (MWCNT30ppmB20EEGAO crank in all load) 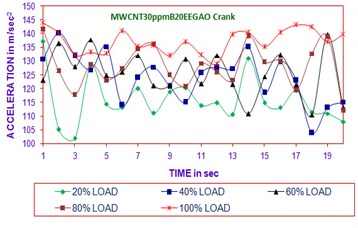 Fig. 18. Time vs acceleration (MWCNT30ppmB20EEGAO bottom in all load) 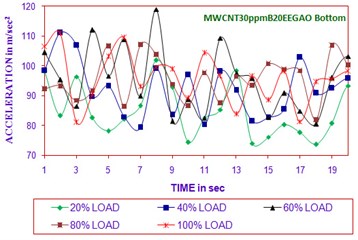 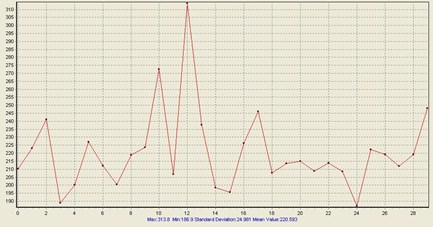 Consequently, the acceleration is caused by various reasons such as injection parameter and cetane number. The acceleration is not only caused by above two reasons, it may also be possible because of fire point, flash point, viscosity, molecule structure, physical properties, thermal properties and chemical properties. MWCNT fuel is a oxygenated fuel. The acceleration is decreased with higher contented of oxygenated fuel and also fuel spraying and fuel structure has an impact. Vibration reduction could be attributed to short ignition delay and the improved ignition characteristics. In MWCNTB20EEGAO blend, it has advanced combustion, because surface volume ratio was higher in MWCNT [20]. This leads to improve the atomization of fuel, thus enhance the combustion and heat transfer rate, it leads to reduced vibration. In this perspective, the catalytic activity of MWCNT could have improved, due to the existence of high surface area and active surfaces. The mean acceleration in head was 181.1 m/sec2 for MWCNT30ppmB20EEGAO blend at 20 % load. The mean acceleration in crank was 115.1 m/sec2 for MWCNT30ppmB20EEGAO blend at 20 % load. The mean acceleration in bottom was 84.98 m/sec2 for MWCNT30ppmB20EEGAO blend at 20 % load.

Table 2. Summation of details for optimal for EEGAO and MWCNT30ppmB20EEGAO

The minimal vibration is seen in each of the three positions for MWCNT30ppmB20EEGAO at 20 % load and maximum is noted at 100 % load. Subsequently, vibration might be influenced by different factors like fuel cetane number, and injection advance. Vibration decrease could be credited to short ignition delay and the enhanced ignition attributes of MWCNT. Thus, prompting higher catalytic activity because of their higher surface to volume proportion and improving fuel air blending in the burning chamber. The second least value of vibration is seen in diesel. The homogeneous charge so obtained results in appropriate and complete combustion. Thus, the results show that the delay period was limited, and engine vibrations measured were diminished. The vibration of B20EEGAO biodiesel fuel is higher than that of diesel fuel. Likewise, for pure biodiesel fuel, viscosity is more than diesel fuel. Results also confirms that vibration was altogether influenced by engine load and fuel blend. The average peak vibration can be decreased by adding the MWCNT. The experimental analysis is conducted in the same DI diesel engine for all fuels used in this work. For all the fuels used, the vibration produced does not affect the engine parts, whereas it is noted that for MWCNT30ppmB20EEGAO the vibration is minimal compared to diesel and B20EESAO. So, it is concluded that MWCNT30ppmB20EEGAO is suitable to increase the life of the engine.