Copyright © 2019 Sen Zhang, et al. This is an open access article distributed under the Creative Commons Attribution License, which permits unrestricted use, distribution, and reproduction in any medium, provided the original work is properly cited.

Cold mechanical vibration of air-cooled brake disc is mainly caused by the non-uniform geometry, including disk thickness variation (DTV) and side face run-out (SFR). A mathematical model consisting of the non-uniform geometry is constructed, which is imported into the dynamic brake model established by Lagrange equation as initial parameters. The braking moment fluctuation during braking process is obtained by MATLAB software. The experimental verification is realized based on Link3900 NVH test platform, where result shows that the calculated brake pressure is quite consistent with the test value. By single variable method, the key influence factor that affected braking moment fluctuation is analyzed, including DTV, SFR, friction coefficient, contact stiffness coefficient and damping coefficient. The conclusion shows that reducing these parameters within a certain range can significantly reduce the amplitude of cold vibration, except for the contact damping coefficient.

Disc brake is one of the most widely used brakes in automobiles at present. Still, as an important and common problem in disc brakes, cold mechanical vibration is mainly caused by the non-uniform geometry formed by machining, assembly, non-uniform wear and corrosion. It not only has a bad influence on the comfort, reliability and safety of automobiles, but also accelerates the aging and fatigue damage [1] of relevant components of brake system, and increases the cost of quality assurance and maintenance. A large number of tests have shown that the cold vibration of brake belongs to 1-5 order low frequency vibration, generally below 100 Hz. Compared with geometric inhomogeneity, the cold vibration is less easily affected by its own modal or material characteristics, especially these air-cooled disc brakes because of the ventilation slot structure.

As we all know, the mathematical description for the discrete vibration system is quite convenient for spring-damping system research, but rarely mentioned or applied in disc brake system. At present, most of the studies on braking vibration are mainly based on modal analysis [2-5] and noise testing [6-9]. Whether the computation of discrete vibration with multiple degrees of freedom is suitable and accurate for the disc brake cold vibration and noise research is still not quite clear. Therefore, this hypothesis is put forward according to the non-uniform geometry of brake disc that caused by disk thickness variation (DTV) and side face run-out (SFR), and it can be verified by NVH experimental method that designed in the paper.

Geometric inhomogeneity of thickness, also known as disk thickness variation (DTV, unit of μm), refers to the thickness difference of brake disc along the circumferential direction, as shown in Fig. 1. In the braking process, the friction equivalent radius will be changed, and the contact pressure distribution will be uneven. At the same time, because the piston in the hydraulic brake system pushes the brake disc close to the rotating brake disc, the uneven thickness of the brake disc will force the piston to produce periodic displacement fluctuation in the axial direction, which will cause the brake pressure fluctuation. The main causes for DTV production can be summarized as follows: (1) Certain errors occurred in the manufacturing and installation process; (2) influenced by braking pressure, the structure of brake disc could be easily warped; (3) after a long time of braking, chemical corrosion of friction pair materials appeared. (4) non-uniform wear existed on the contact surface.

Geometric inhomogeneity of side face run-out (SFR, unit of μm) means that the side face of air-cooled brake disc has an axial lateral deviation, but without necessary changes in thickness. As shown in Fig. 2, SFR will cause slight axial displacement of the brake disc along with rotation in braking process, which will have a periodic impact on brake pads and pistons that are connected with them. It will also lead to uneven distribution of contact pressure between air-cooled brake disc and pads, change friction coefficient and equivalent radius of braking force, and cause the braking moment fluctuation and the braking pressure fluctuation [10]. 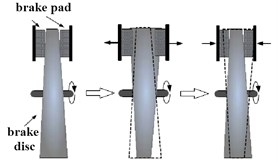 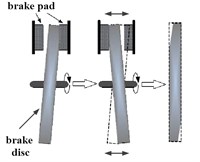 where is installation deflection angle of air-cooled disc.

Defined the radius of air-cooled disc as , it can be known that , then the displacement of direction at the four points of A, B, C and D can be calculated as follows:

3. Establishment and solution of dynamic model of braking system

The frequency of cold vibration is lower than 100 Hz, and the cause of vibration is independent of the natural frequencies of the brake components [12]. Therefore, according to the working principle of air-cooled disc brake, the braking system can be simplified to a multi-degree-of-freedom discrete system, as shown in Fig. 6. The contact mechanics model of disc brake is established by methods of multi-body dynamics to determine the contact points of left and right pads. Displacement is set as input in this system, braking moment, braking pressure and vibration acceleration of brake clamp are set as output. 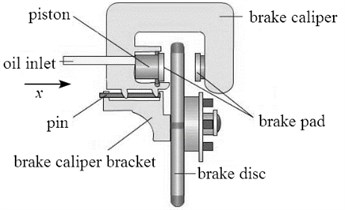 According to Lagrange equation, the relationship between generalized force and generalized coordinate is obtained as follows:

where is the Lagrange function, equal to the kinetic energy of the system minus the elastic potential energy . is the system damping energy.

The expression of total kinetic energy of disc brake system is:

The expression of total elastic potential energy of disc brake system is:

The system damping energy can be expressed as follows:

According to the bearing condition of brake system, the internal force system can be calculated as follows:

where , , and are coefficients of contact friction force at different locations.

The relationship between the two solutions can be expressed by matrix traveling as follows:

The matrix is defined as:

The differential equation of matrix is:

According to the principle of cold vibration, it can be known that the brake torque fluctuation equals the dynamic torque :

The parameters of the braking system can be obtained from the experimental measurements as shown in Table 1.

According to the dynamic differential equation of the braking system mentioned above, the fluctuation of braking moment of caused by DTV and SFR in braking process can be obtained in Fig. 7, and the effective braking torque of is shown in Fig. 8. In all graphs, parameter represents time. When air-cooled disc brake works, the vehicle speed decreases, so the variation of braking moment fluctuation will be similar to the sinusoidal curve with periodic increasing, but the magnitude of positive and negative is different, which is similar to the characteristics of input on both sides of the brake disc.

Fig. 7. The braking moment fluctuation of 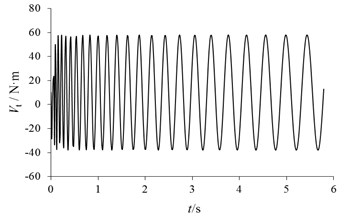 Fig. 8. The effective braking torque of 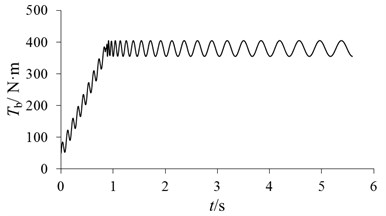 In order to verify the feasibility and reliability of the dynamic model, the bench test was adopted. The experimental research is realized based on Link3900 NVH test platform in the paper. The overall installation diagram of the disc brake and sensor is shown in Fig. 9. The brake is mounted on the spindle and synchronously rotates along with the output shaft of the reducer. According to the test results of pressure sensor, the accuracy of brake pressure calculation is validated as shown in Fig. 10. It can be seen that the brake pressure curve shows a consistent trend of change. Due to sampling frequencies [13, 14], there are some differences in vibration periods. Generally, the model has high reliability and can be used to analyze the influence of different factors.

The fluctuation of braking moment is used to measure the characteristics of cold vibration. The factors affecting the braking moment fluctuation include not only the displacement input on both sides of the air-cooled brake disc, but also the material parameters of the friction pair. Therefore, these two kinds of influencing factors are discussed respectively.

The wave peak value and trough value of with different DTV and SFR is shown in Table 2. It can be known that the linear variation of peak value for SFR is more obvious. In order to reduce the cold vibration factor, the precision of processing and installing [15] should be improved, which can especially reduce the initial value of disk thickness variation and side face run-out.

Table 2. Wave peak value and trough value of with different DTV and SFR

The main parameters of friction pair include friction coefficient, stiffness coefficient and damping coefficient. The fluctuation of braking moment can be considered from the aspect of system stability [16]. According to Lyapunov’s first method, the state of non-linear system can be considered. If the maximum real part of the eigenvalue is equal to zero, the system is critically stable. However, as long as there is an eigenvalue whose real part is greater than zero, the system will lose its stability and its natural response will diverge [17]. Also, the imaginary part corresponding to the eigenvalue is the natural angular frequency of the unstable mode [18].

a) Condition of different and

b) Condition of different and

Fig. 14. Changes of with different variable

a) Changes of caused by

b) Changes of caused by

c) Changes of caused by

It can be concluded that if the contact stiffness coefficient between brake disc and brake pad is reduced through material optimization [19], the amplitude of brake moment fluctuation can be effectively reduced. At the same time, on the premise of sufficient friction between disc and pads, proper reduction of friction coefficient is also one of the effective methods to reduce the amplitude of braking moment fluctuation.

The research results show that the discrete multi-degree-of-freedom vibration system is suitable for the calculation of brake cold vibration, which has important guiding significance for the research and control of noise. In addition, the air-cooled brake disc has hollow groove structure, which will amplify the cold vibration effect and would cause severe local wear and noise. Through this study, the following conclusions can be drawn.

1) The influence of different parameters on cold vibration can be evaluated effectively by using single variable method to research the braking moment fluctuation. This conclusion can provide an important basis for noise reduction and vibration reduction of disc brake.