Copyright © 2019 Liangrong Yuan, et al. This is an open access article distributed under the Creative Commons Attribution License, which permits unrestricted use, distribution, and reproduction in any medium, provided the original work is properly cited.

In order to discuss the superiorities of High Vacuum Drubbing Means (HVDM) in soft foundation treatment of roads, this paper takes the soft foundation treatment project of Wucheng Road in Wuwei County of Wanjiang City Belt in China as an example. By comparing and analyzing the economic benefit differences between HVDM method and traditional powder injection pile method in soft soil foundation treatment, the following conclusions are drawn: Low-level high-vacuum compaction method soft base processing method is better than traditional powder-jet pile method in soft foundation treatment. The method can better reduce the consumption of raw materials such as cement and stone, avoid the pollution of the social environment caused by cement production, shorten the construction period by about 50 % and save the direct labor cost. Compared with the traditional powder-sprayed pile method, total cost of the project can be saved by more than 30 % and the construction quality is controllable. The construction process is green and its social and economic benefits are remarkable. 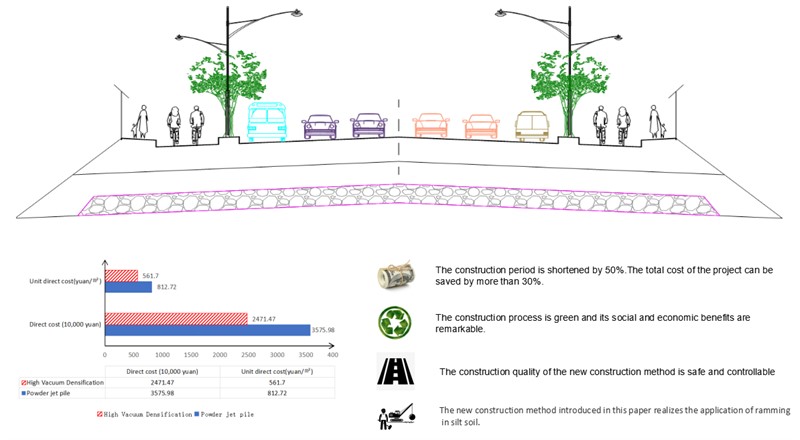 With the rapid development of China’s social economy, road construction and bridge construction have played an important role in promoting regional economic development and will become the norm state of social and economic construction. However, there are some shortcomings in traditional road soft foundation treatment methods, such as long construction period, high cost, impacting natural landscape, destroying ecological environment. In addition, it will directly or indirectly cause air, soil and water pollution and lead to various geological disasters. Obviously, this traditional road soft foundation treatment method with high pollution, high cost and high risk needs to be improved and innovated urgently.

2.1. The basis of calculating standards

The calculation criteria are implemented according to relevant policies and documents such as Anhui Municipal Engineering Budget Estimate Quota, as follows:

– The unit price of quota labor fee shall be executed in accordance with No. 16 of Construction Cost Management General Station of Anhui Province (2013);

– Taxes for construction projects are calculated on the basis of No. 26 of Construction Cost Management General Station of Anhui Province (2011);

– Prices of materials and equipment are included according to local market inquiries;

Wuwei County Wucheng Road Soft Foundation Project is about 1100 m long, 40 m wide and 44,000 m2 treated area. According to the design scheme, the design height of the top surface of the roadbed and the calculation of the road plane design plan, 43442 powder-sprayed piles are required for the motor lane, non-motor lane and sidewalk of this section. And the pile length is about 370593.2 m, the cleaning surface is 116958.697 m3, while the filling volume is 1152.592 m3, of which about 77202.564 m3 is hill-skin stone backfill, about 33284.694 m3 is graded gravel, and the plain earth backfill and two-way fiberglass geogrid is 4515.334 m3and 43560 m2respectively. Fig. 1 shows the cross-sectional plan of foundation treatment in the Eighth Road Standard Section. The boundary lines of foundation treatment are 2m out of the road red line and the foundation treatment width of the standard section is 44m. The boundary lines of foundation treatment in the non-standard section are also controlled according to the above principles. 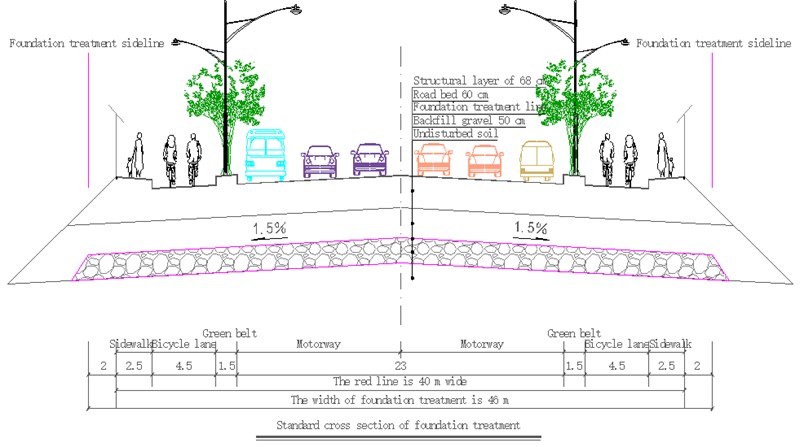 According to the above calculation criteria, it can be seen that DJM pile (50 cm, cement content 60 kg/m) is 55 yuan/m, Hill pebble backfilling is 89.7 yuan/m3, two-way glass fiber geogrid is 15.87 yuan/m2, graded gravel backfilling is 134.55 yuan/m3, plain soil backfilling is 31.45 yuan/m3, surface cleaning is 26.85 yuan/m3, the distance between abandoned party and debit party is 5 km. The preliminary design budget for the treatment of soft foundation by dry jet grouting pile in Wucheng Road is shown in Table 1.

According to the scheme and the calculation of the design height of the top surface of the roadbed, the engineering quantities are as follows: the cleaning surface is 66107.8 m3; the backfilling volume of hilly stones is about 36059 m3; the plastic drainage board is 417347 m without portal frame bag sand rig; the geotextile is 66107.8 m2; the vacuum film is 135.6 m2; the full ramming energy of dynamic compaction soil foundation is less than 120 kN·m, ramming once, and the soft foundation area of repeated ramming hammer at each position is 60098 m2; The tamping energy of base point is less than 2000 kN·m, the number of tamping points per 100 m2 is less than 12, and the soft foundation area is 18094 m2 with repeated tamping times less than 4 times at each tamping point.

The direct cost of the low-level high-vacuum compaction method consists of cleaning the road surface, strong tamp, precipitation, etc. The calculation standard is based on the above.

From Table 3, it can be seen that six soft foundation projects, such as Yangxiang Road Project in Wuwei County, Wanjiang City, Anhui Province, have a treatment area of 9717.11 million m2. The project cost [20, 21] of powder-jet pile method and low-level high vacuum compaction method are 789 million yuan and 545 million yuan respectively. By replacing the traditional method with the low-level high vacuum tamping method, only the above six engineering applications can save 244 million yuan of direct cost, with extremely significant economic benefits. According to the statistics bulletin of the Ministry of Housing and Urban-Rural Construction in 2016, as shown in Fig. 3, the total length of roads has increased by 20.771 million kilometers and the total area of roads has increased by 39.68 billion square meters in recent years.

From the statistical chart, we can see that the road area increases linearly every year. The data are linearly fitted by Excel. The result shows that the linear relationship between the road area and the year is , that is, the average additional road area is 380570 million square meters per year. The results are shown in Fig. 4.

Fig. 4. Linear fitting map of urban road area for urban and rural construction of the ministry of construction in 2016 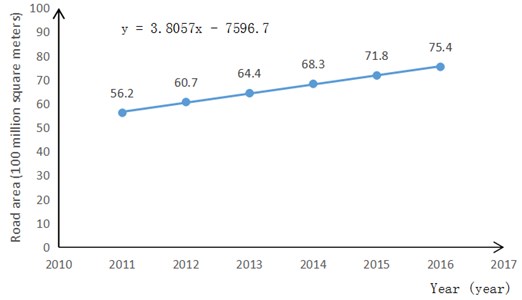 According to the introduction of China Academy of Environmental Sciences and China Cement Association, the cement industry is a key polluting industry, and the problems of resource consumption and ecological destruction are prominent. Carbon emission in cement production is second only to that in electric power industry. Particulate matter emission accounts for 20-30 % of the national particulate matter emission, and sulfur dioxide emission accounts for 5-6 % of the national emissions. Fluorite is added to some shaft kilns to reduce burning heat consumption, and fluorine pollution in surrounding areas will also be caused.

2) According to the statistical bulletin of the Ministry of Housing and Urban-Rural Construction on urban-rural construction, a linear fitting is made. It can be seen that in recent years, about 381 million m2 of new road area has been added every year. Assuming that 10 % of the new roads in China need foundation treatment every year, the average annual environmental benefit will be 344563.2 billion yuan (381 million m2 × 10 %×89.73 yuan/m2).

3.1. Conform to national policy, cater to development and build a resource-saving country

“Entering the ecological civilization and building a beautiful China” is an important part of the Chinese nation's realization of the Chinese dream. In accordance with the concept of respecting, conforming to and protecting nature, China will implement the basic national policy of saving resources and protecting the environment, and support and encourage the conservation and comprehensive utilization of resources. Therefore, it is in line with the requirements of the development of the times to actively promote the new technology of low-level and high-vacuum compaction and the new technology of soft foundation treatment.

3.2. Reducing pollution and beautifying environment and constructing an environment-friendly society

Ecological civilization emphasizes respecting and protecting nature, so as to realize sustainable development of economy and society. Using low-level High Vacuum Densification Method to treat soft foundation can not only save natural resources for municipal road construction, but also effectively reduce harmful gas and water pollution from cement production. Moreover, it can reduce the pollution caused by dust, enhance people's awareness of environmental protection and energy conservation, and promote economic growth and coordinated development of environmental protection.

1) Low-level and high vacuum compaction soft foundation treatment method is a new technology for rapid consolidation of soft soil foundation, which has obvious advantages: firstly, reducing the consumption of raw materials such as cement and stone; secondly, avoiding environmental pollution in cement production; and thirdly, saving about 50 % of the construction time, controllable quality as well as green and environmental friendly construction process compared with traditional construction methods.

2) The research results have been successfully applied to six soft foundation projects such as Yangxiang Road Project in Wuwei County, Wanjiang City Belt, Anhui Province. The treatment area of the project is 9717.11 million m2. The construction cost of powder-jet pile method and low-level high vacuum compaction method is 789 million yuan and 545 million yuan respectively. By replacing the traditional method with the low and high vacuum tamping method, only the above six engineering applications can generate direct economic benefits of 244 million yuan, environmental protection benefits of 87 million yuan, thus the economic benefits and social benefits are remarkable.

3) According to the statistics bulletin of urban and rural construction of the Ministry of Housing and Urban-Rural Construction, in recent years, an average area of 381 million m2 of new roads has been added every year. If 10 ;’. % of new roads use low-level high vacuum compaction method instead of traditional construction method for foundation treatment, the country can save an average of 9.564 billion yuan annually, and create better environmental benefits.

In a word, the application of low-level and high vacuum densification method has achieved remarkable results in saving mine resources, reducing environmental pollution and improving the economic and social benefits of the project, which is worth popularizing.