Copyright © 2019 Guang Yang, et al. This is an open access article distributed under the Creative Commons Attribution License, which permits unrestricted use, distribution, and reproduction in any medium, provided the original work is properly cited.

The composition, operating principle and image processing algorithm of automatic recognition system for code of wheel hub model based on optical character recognition (OCR)are introduced in this paper. In addition, characteristics of character information about wheel hub model are analyzed, algorithm of OCR based on gray-scale template matching is expounded and thus wheel hub model can be effectively identified. The system can meet requirements of mass production and online quick sorting for wheel hub production line, which can overcome disadvantages of conventional manual sorting, improve productivity and alleviate labor intensity.

Wheel hub is a crucial auto part and it is closely related to the safety and comfort of an automobile. During production process, different detection equipments, manufacturing routes, machine tools and cutters should be used to manufacture and test different wheel hub models on a production line. For the purpose of realizing mixed-model production with an automatic production line, wheel hub models should be identified, which is mainly conducted through manual recognition. Such method is ineffective and thus cannot meet requirements of modern industrial production line. Therefore, a rapid and accurate detection method is an urgent need [1]. The system researched in this paper is an automatic recognition system for code of wheel hub model based on OCR technology, which can identify the character information on various models of wheel hubs manufactured on a production line and realize production statistics and sorting in an automatic way. Its advantages include visual automatic recognition and online recognition, which are characterized by high accuracy and rapid processing. 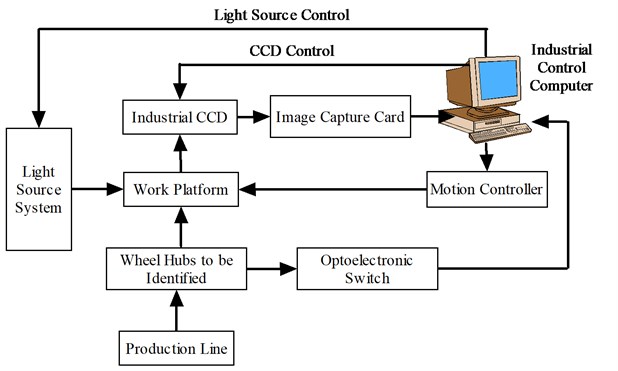 2.1. Preconditions for application of recognition system and its operating principle

(1) Characters on wheel hubs engraved by their producers should be standardized and unified;

(2) Character information engraved on wheel hubs should be of a fixed length.

When the above conditions can be met, rate and speed of recognition will be improved to a large extent.

Operating principle of the system: When a wheel hub conveyed by a production line is passing through an optoelectronic switch, a signal should be triggered and transmitted to an industrial control computer. After receiving such signal, the computer will control the work platform to rotate and position character information on the wheel hub, and then industrial CCD will be enabled to draw up character recognition range and identify characters and thus generate a code for the wheel hub model.

2.2. Capture and preprocessing of image of characters on wheel hub

During the process of capturing image of characters on a wheel hub, it is unavoidable that the process will be influenced by various factors such as change of ambient light, dust, seal coat of wheel hubs and vibration of equipment. There may exist some noises in an image, but background and lighting are main factors influencing the quality of imaging. LED light source should be used when the system is capturing images, which can eliminate the influence generated by uneven lighting and background interference [2].

a) The original image of characters on wheel hub

b) Image after smooth filtering

2.3. Threshold segmentation for image of characters on wheel hub

An analysis on image of characters on a wheel hub indicates the following characteristics:

(1) Image of characters on a wheel hub is composed of figures and letters;

(2) There is no big difference between grayscale of image of characters on a wheel hub and that of the background, so grayscale threshold for segmentation should be smaller in order to reserve character information in an image.

The processing based on the above characteristics is as follows:

(1) Grayscale histogram of image of characters on a wheel hub should be analyzed to determine the best grayscale threshold for image segmentation [3].

Histogram for grayscale of wheel hub model (55977-M2) is indicated in Fig. 3., in which -axis represents grayscale value of pixels (), while -axis represents the number of pixels which have a corresponding grayscale (). There is no big difference between the grayscale value of image of characters on a wheel hub and that of the background, so the double peak value existing in the histogram is not very obvious and grayscale distribution is relatively concentrated. Therefore, the result of image segmentation through double-peak method will not be very good, and histogram threshold method should be used to determine the best threshold value and thus image segmentation can be realized. There is no big difference between the grayscale of foreground and background of an image, so the principle for image segmentation should be reserving character information in an image to the largest extent and further smoothing background information of the image.

(2) The principle for determining the best threshold value for image segmentation through histogram threshold method.

Based on the corresponding grayscale value () for probability of occurrence () of the given grayscale in the system, should be used as the best threshold value for segmenting image of characters on a wheel hub.

After the best threshold value () is determined, an image should be segmented, and its background noises should be further eliminated. The algorithm applied is indicated in Eq. (2):

Fig. 4. is the statistical probability graph for grayscale of image of characters on a wheel hub model (55977-M2) and corresponding probability is 0.02. Fig. 5. is the image segmented with histogram threshold method, and the difference between Fig. 2(b) and Fig. 5. 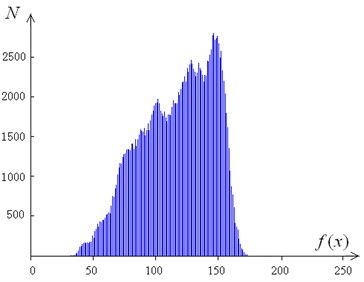 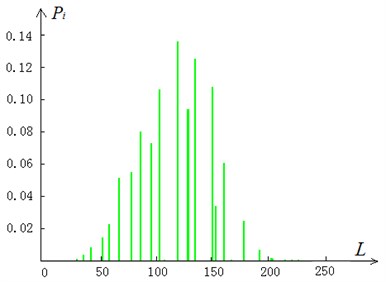 2.5. Template matching recognition based on characteristics

Template matching is one of the most classic and representative methods for image recognition. Image matching algorithms can be mainly divided into two categories, in which one category is matching based on grayscale correlation and the other one is matching based on characteristics [7, 8], and the system adopts the second one.

Given that the number of identifiable categories is and sample vectors in various categories () are , , ..., , then the distance between characteristic vector () and each sample can be defined through Eq. (3):

The result of identifying image of characters on a wheel hub model (55977-M2) through the above method is indicated in Fig. 7. 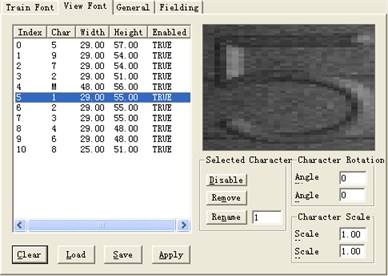 Through analysis on data in Table 1, the following conclusions can be reached:

4) Technology of visual recognition by computer is applied in the system, which is characterized by some advantages such as non-contact, online real-time feature, high speed and anti-interference capacity on site, and thus it can realize the classification of different models of wheel hubs produced on a production line.

This work was supported by Jilin Provincial Science and Technology Program (No. 20180201090GX), CITIC Dicastal Co., Ltd., and the equipment has been used in practice.