Copyright © 2019 Wei Wei, et al. This is an open access article distributed under the Creative Commons Attribution License, which permits unrestricted use, distribution, and reproduction in any medium, provided the original work is properly cited.

The backlash is one of the main factors causing the vibration of the gear system. Therefore, many literatures have studied the influence of the backlash on the dynamic characteristics. Kahraman [1] and Jeffrey L. Stein [2] studied the effects of the nonlinearity of the system with the amplitude of the backlash on the gear speed fluctuation. Fuhao Liu [3] established a vibration-shock model of gear system considering tooth surface lubrication and backlash. The power-spilt gear system was first applied in helicopters and has been studied in a large number of documents. Rsshidi [4] and Krantz [5] studied the dynamics and load sharing characteristics of the helicopter power-spilt drive system. Bechhoefer [6] studied the performance state quantification method of the power-spilt gearbox by using various gear analysis algorithms. The development of modern ship technology promotes the research and development of the marine power-spilt gear system. Zhang Ting [7] and Li Nan [8] solved the dynamic load coefficients of the power-spilt system. Chang Lehao [9] and Wang Feng [10] established a system model considering the factors of bearing stiffness, time-varying meshing stiffness and transmission error.

In this paper, a kind of marine dual-input power double-branch gear transmission system is taken as the research object, and a dynamic model considering nonlinear factors such as time-varying meshing stiffness and time-varying backalsh is established. The study of the influence of input speed, torsional stiffness of the linkage shaft and support stiffness on the vibration characteristics of the system provides a theoretical basis for the analysis and design of the marine power-splot train.

The dynamics model of a marine power-spilt gear system is shown in Fig. 2. It is assumed in the modeling that the hub is a rigid body and the gear teeth are elastic; the bearings at both ends of the gear shaft have the same parameters and dynamic characteristics; the two helical gears that make up the herringbone gear have the same meshing stiffness, meshing damping and static transmission error; considering the torsional deformation of the drive shaft.

In this model, the influence of tooth surface friction and eccentricity are not considered. It is considered that the bearing support stiffness and damping are constant, while ignoring the axial vibration of the herringbone gear. In Fig. 2, indicates the input torque ( for the high-pressure end, for the low-pressure end, the same below), the load torque is ; and are torsion angles of each gear, (1, 2,..., 5, the same below) is the inertia moment of each gear assembly; and are the concentrated mass of each gear assembly; (1, 4, 5; 2, 3, 6) indicates the dynamic meshing stiffness; is the meshing damping; donates backlash; indicates static transmission error. Based on the above analysis, the generalized displacement vector of the system can be expressed as: 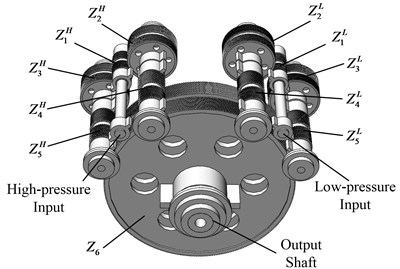 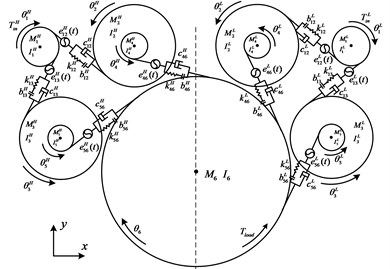 As the gear rotates and the bearing clearance changes, the center coordinate of the gear changes with time, which causes the meshing center distance and the meshing angle to change, so that the backlash is also in dynamic change. The dynamic backlash can be expressed as:

According to the segmentation characteristics of the backlash, the nonlinear function of the dynamic backlash can be expressed by the following formula:

The dynamic meshing force between the gears can be expressed as:

where , , , indicate bearing stiffness and damping in the and directions of the gear respectively; , , , donate meshing force. , , , are the angle between the end-direction meshing line and the x positive direction; indicates gear index circle radius; , are torque moments transmitted by the linkage shaft.

4. Analysis of vibration characteristics of system

This paper is numerically simulated on the basis of the mathematical model of the concentrated mass to study the effect of backlash, the input speed, the linkage shaft stiffness and the bearing support stiffness on the vibration characteristics of the system. The fourth-order fixed-step Runge-Kutta algorithm is used to solve the system differential equations. System parameters are shown in Table 1.

The initial backlash is taken as 0.3 mm, 0.8 mm and 1.3 mm respectively. The calculated output vibration acceleration and vibration displacement are found to be the root mean square value (RMS), which is used to indicate the vibration response of the system under given parameters.

The input speed is increased from 1000 r/min to 6000 r/min. The response characteristics of the power-split system with input speed are studied under different backlash. The calculation results are shown in Fig. 3.

Fig. 3. System vibration response with the changes of input speed 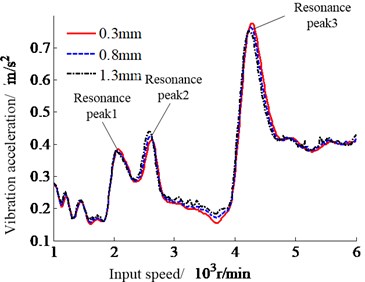 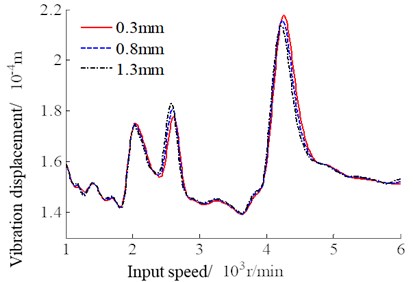 4.2. Influence of torsional stiffness of linkage shaft on vibration characteristics of system

The torsional stiffness of the linkage shaft is increased from 105 Nm/rad to 107 Nm/rad, and the vibration response of the output shaft is numerically simulated. The calculation results are shown in Fig. 4.

Fig. 4. System vibration response with the change of torsional stiffness of the linkage shaft 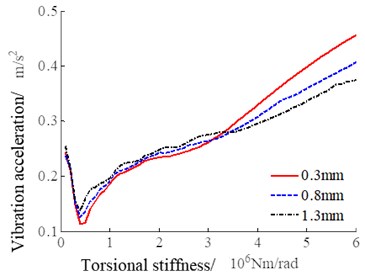 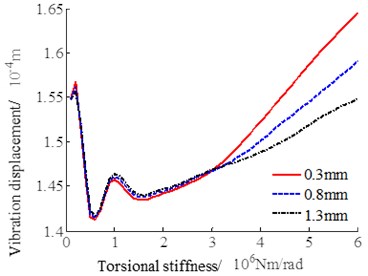 The support stiffness of output shaft increases from 108 N/m to 109 N/m, and numerical simulation is performed. The calculation results are shown in Fig. 5.

Fig. 5. System vibration response with the changes of support stiffness of the output shaft 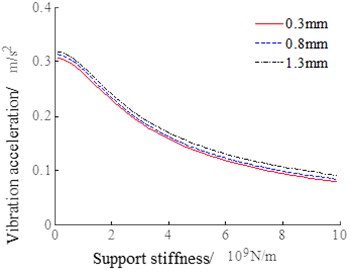 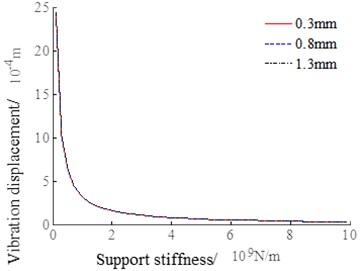 In this paper, a marine gear system is established, the dynamic backlash and time-varying meshing stiffness are considered. Taking the vibration characteristics of the system output as the research target, the vibration responses of the system with the input speed, the torsional stiffness of the linkage shaft and the support stiffness of the output shaft under different backlash are calculated. The following conclusions can be drawn by analyzing the results:

3) As the support stiffness increases, the vibration acceleration of the output shaft does not change much, while the vibration displacement decreases.