Copyright © 2019 Filip Pachla. This is an open access article distributed under the Creative Commons Attribution License, which permits unrestricted use, distribution, and reproduction in any medium, provided the original work is properly cited.

The impact of mining shocks on surface structures in Poland is very current [1]. This is related to the extraction of such raw materials as hard coal, lignite and copper ores. Additional seismic forces generated during the mining shock can significantly affect surface structures at various stages of construction life. If the object is erected within the reach of a nearby mine, the impact of mining shocks should be taken into account at the design stage. There is often a situation in which construction works are subjected to additional seismic forces during operation (e.g. as a result of enlarging the area of a raw materials extraction [2]). In such cases it is necessary to determine the dynamic resistance of buildings and to verify the impact of mining shocks on these objects. The resistance assessment can be made, among others, with one of the following methods: response spectrum, load history, pushover. In the case of road overpasses, this is particularly important as these are buildings important from the point of view of the functioning of urbanized areas. Road viaducts and footbridges in the aspect of dynamic interactions were the subject of scientific papers [3-6].

The viaduct has a beam-like bearing structure with a fixed construction height. The middle, longest span is arched. The arc has variable both height and thickness. To the arch, with a hangers spaced every 4.00 m, there is a suspended platform. The abutments are thin-walled. The outrigger wings are parallel to the axis of the viaduct. Intermediate supports were designed as double-sided with a square cross-section of 1.40×1.40 m. The bearing structure of the viaduct was designed as a five-span beam with spans 18.50 + 23.00 + 80.00 + 23.00 + 18.50 m. In the longest span, the platform is suspended to two reinforced concrete arches by means of steel hangers spaced every 4.00 m. The arcs have variable geometry and are inclined in the direction of the object axis at an angle of 81.5 and connected to each other by four horizontal concentrations. The cross-section of the platform is double-bar, designed from prestressed concrete class C40 / 50. In the access bays, the width of the girders is from 0.80 to 1.00 m (under the bridge plate), height – 1.24 m. In the arch span the beams are narrower (0.60-0.80 m). The spatial MES model was adopted for analysis. Figs. 2 and 3 present the MES model of the analyzed viaduct.

The basis for the construction of the FEM model was the executive design. On its basis, geometric dimensions as well as cross-sections of structural elements were adopted. Material parameters were also selected based on the implementation documentation. The calculations included additional masses resulting from the arrangement of finishing layers and non-structural elements on the deck slab, determined on the basis of project documentation. The boundary conditions in the model result from the bridge bearing scheme. In Fig. 4, the bearing design is shown after the project documentation, while the releases at individual degrees of freedom in the nodes are described below.

Fig. 2. FEA model of the viaduct – view from the top 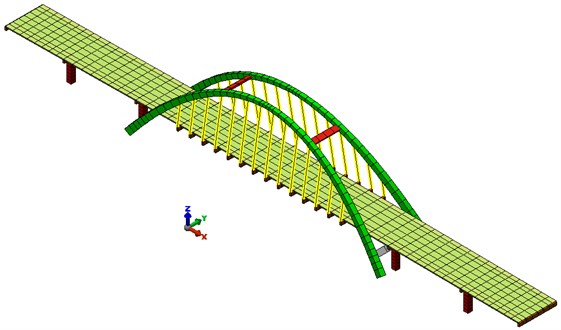 Fig. 3. FEA model of the viaduct – view from the bottom 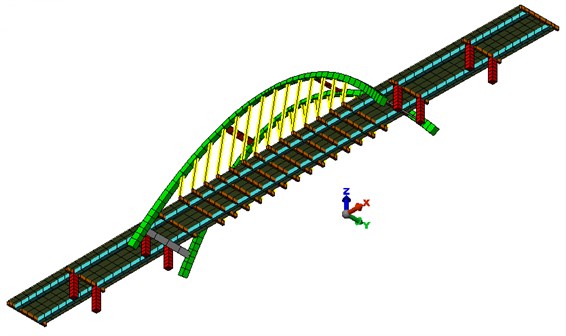 Fig. 4. Diagram of the viaduct bearing

The response spectrum method was used to calculate the dynamic response of the model to the kinematic necessity caused by ground vibrations from the mining shock. This method is recommended, among others by the guidelines [7], the Polish standard [8] and the European standard [9] regarding the design of facilities in the areas of natural earthquakes.

The application of a standardized standard response spectrum describing the possible ground vibrations caused by mining shocks is essential in the adopted method. Such model response spectra are created on the basis of registered ground vibrations in the analyzed area. The object is located in the Upper Silesian Coal Basin (USCB). It is therefore possible to use in the calculation the model acceleration spectrum of responses for this area (compare Fig. 5).

Due to the calculation method chosen, the analysis was divided into two stages:

– in the first stage, the values of natural frequencies and the corresponding vibration modes were determined,

– in the second stage, cross-sectional forces, displacements and stresses from predicted accelerations of ground vibrations were determined (by the response spectrum method).

Figs. 6-8 present selected characteristic forms of own vibration of the analysed model. 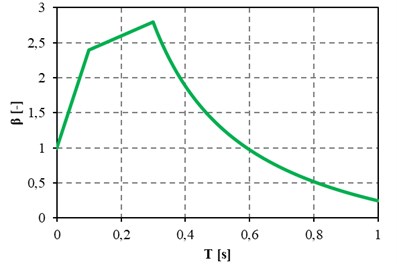 Cross-sectional forces, displacements and stresses were determined using the spectral response method and the model acceleration response spectrum from the figure 5 for the predicted value of vibration accelerations PGAH10 = 30 mm/s2. The first 50 forms of vibrations of the analysed model were adopted for the calculations. The calculated values of cross-section forces are dynamic values without the participation of other loads. Values of obtained cross-sectional forces, displacements and stresses were compared with dimensioning values for significant load cases in static analysis from project documentation. This approach allows to estimate the level of effort of the structure in relation to the values determining the reinforcement elements adopted for implementation and the reinforcement degree of reinforced concrete elements.

Fig. 6. FEA model of the viaduct – view from the bottom 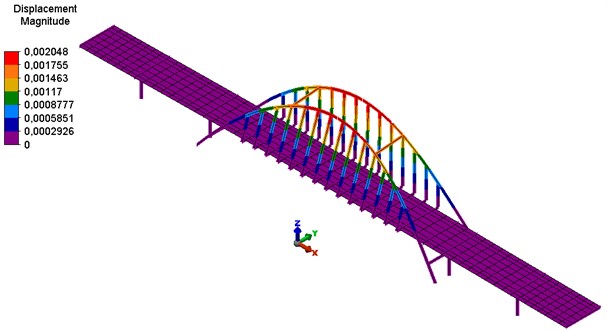 Fig. 7. The second form of natural vibrations – longitudinal vibration of the bridge structure 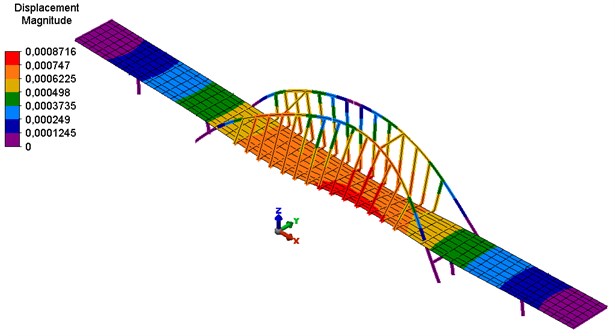 The analysis of the impact of vibrations on the object covered the verification of the following safety conditions:

– checking the stresses in the elements of hangers,

– checking the stresses in structural elements of load-bearing arches,

– checking the cross-section forces in support pillars in axes 3 and 4,

– checking the condition of destruction of the dilatation of the object.

The above conditions in similar objects determine their dynamic resilience [4-6, 10]. Detailed results of dynamic analyses are presented, among others at work [11]. The cross-sectional forces in the viaduct hangers are shown below in Fig. 9. The values of seismic forces do not exceed 1 % of the permissible forces in hangers. It should therefore be stated that the condition of the load capacity of hangers remains fulfilled. 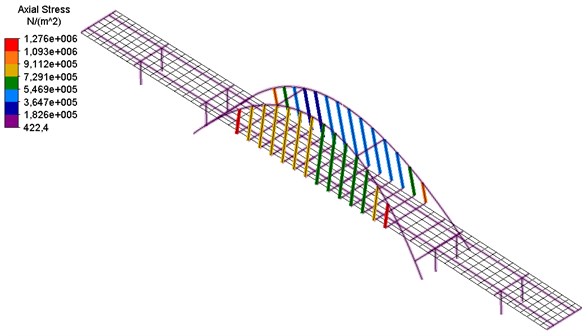 For all the dynamic resistance criteria formulated in the work, the conditions are met. With the predicted values of accelerations of ground vibrations PGAH10, the values of additional inertia forces are much lower than the values used in the design of the viaduct. The viaduct can be safely used.