Copyright © 2020 Yinfeng Dong, et al. This is an open access article distributed under the Creative Commons Attribution License, which permits unrestricted use, distribution, and reproduction in any medium, provided the original work is properly cited.

The calculation process of time history analysis method is complicated and time-consuming which is not convenient for wide application and promotion in engineering design. Based on the idea of mode decomposition in structural seismic response analysis, the fluctuating wind response spectrum and the mode decomposition response spectrum method for wind-induced vibration analysis are derived in this paper. Taking a high-rise building structure as an example, this paper uses the method proposed in this paper, the time history analysis method and the method of my country's load code to compare the wind-induced vibration response analysis. The results show that the method proposed in this paper is simple, effective and convenient for engineering application.

The time history analysis method to determine the wind vibration response of the structure requires multiple input wind load time history at the same time, and in order to ensure that the analysis result has a certain guarantee rate, a sufficient number of wind load input samples are required .Therefore, the calculation process of this method is complicated, the calculation amount is large, and it is not convenient for application and promotion in engineering design. For this reason, based on the idea of modal decomposition in structural seismic response analysis [1], this paper proposes and derives the modal decomposition response spectrum method for structural wind-induced response analysis, and uses a calculation example to verify the effectiveness of the method.

2. The relationship between the power spectrum of a random process and its extreme value in the time domain

Let denote the zero-mean stationary Gaussian process, denote the unilateral power spectrum probability density function of the process, and within the period τ, the maximum absolute value of the random process is defined as:, .

According to the derivation of Vanmarcke [2-4], the probability distribution function of is:

where, is the average zero crossing rate,; is the empirical constant, which is generally set as 0.2; is origin moment of power spectrum, (0, 1, 2...), is the circular frequency.

Then the random variable is the expected maximum absolute value of the random process as:

where, is the probability density function of, . Correspondingly, the standard deviation of is:

3. Response spectrum of a single degree of freedom system

Let, is the transfer function of the single-degree-of-freedom system, the relationship of the power spectrum is:

the power spectrum of fluctuating wind adopts the Davenport spectrum .

The motion equation of a MDOF system under wind load is:

If only the influence of pulsating wind is considered:

Substituting equation into Eq. (8), and multiplying it by the transposition of the mode vector, a series of independent equations can be obtained from the orthogonality of the mode shape. Each equation can be written as:

where, . Similar to the case of a single-degree-of-freedom system, the Fourier transformed on both sides of Eq. (12) and converted into the corresponding power spectrum relationship can be obtained:

Eq. (12) is the equation of motion for a single degree of freedom system corresponding to the generalized coordinates. Therefore, only the power spectrum required can be used to find the time domain maximum value of the random process using the previous Eqs. (2) and (3). From Eqs. (10-13), we can find:

For the -th mode, the response of the MDOF system is:

After finding the responses of all modes, use the “Sum of Squares Method” (SRSS) to find the total response, i.e., .

Taking a 32-story high-rise building as an example (Fig. 1(a)), under the same model and conditions the response of the structure under the action of average divided wind and fluctuating wind was calculated using the method of this paper, the time history analysis method and the method specified in the load code. According to the design conditions, the basic wind pressure is 0.3 kN/m2 in the calculation, the ground roughness category is Class B, and the result of the time history analysis is the average of the calculation results of 10 synthetic pulsating wind samples. 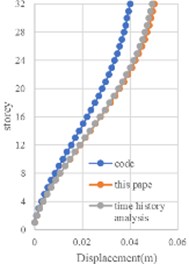 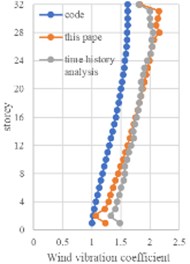 2) Based on the idea of mode decomposition, the mode decomposition response spectrum method for structural wind-induced response analysis is deduced, and a high-rise building example is used to verify its effectiveness. The results show that the method in this paper is simple, effective and convenient for engineering applications.