Copyright © 2019 Petr Morozov, et al. This is an open access article distributed under the Creative Commons Attribution License, which permits unrestricted use, distribution, and reproduction in any medium, provided the original work is properly cited.

The project of the vibration crusher with three degrees of freedom is proposed. The degrees are limited by the guide rails that hold the crusher body and cone against horizontal and spiral motions. The mathematical model for this project is obtained. The observations for the motion of the body, the cone and the unbalance vibrator are made in a numerical experiment. A fourfold superiority of the cone amplitude over the body amplitude was discovered. When the cone partial frequency exceeds the unbalance rotation frequency, a strongly marked beating in the cone oscillations was observed with a frequency 8 times less than the unbalance rotation frequency. At the same frequencies, a body beating was observed.

In modern productions, when crushing solid materials, vibration cone crushers are very promising for use, as the principles of the material optimal crushing are most fully implemented here [1-4]. A greater number of degrees of freedom in vibration crushers predetermines, of course, a greater motion variety [5]. But then the problems of crushing quality become difficult to solve analytically, and they require extensive experiments to determine the optimal crusher parameters. Indeed, estimation about the influence of “swinging”, horizontal and spiral cone motions on crushing can be found out only after the analysis of a real installation with real material, and observation of many parameters. A priori, it can be only assumed that swinging and horizontal displacements lead to increase energy costs, as well as reduce the quality of the crushed material.

The mathematical model for the suggested project differs a lot from the models of vibration crushers with a greater number of degrees of freedom.

The crusher with three degrees of freedom contains 3 moving parts. The body fixed to the base with spiral springs. The crushing cone connected to the body with spiral springs. And the unbalance installed in the bearings of the crusher body. The unbalance rotates around its own horizontal axis in the bearings. The unbalance is set in motion by the standing on the base asynchronous electric engine through an elastic coupling. The body and the cone can only move vertically along the guides . That is, the body and the cone make straight vertical oscillations along the guides (Fig. 1).

Fig. 1. A general scheme of a vibration cone crusher 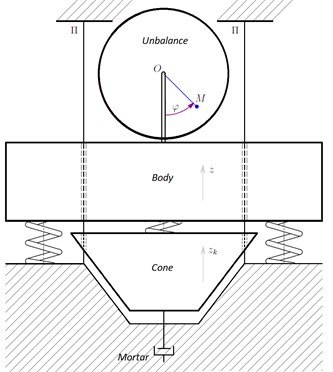 The equations describing the motion of the body and the cone are simple enough, and the equations for the unbalance are rather cumbersome.

Let a fixed rectangular Cartesian coordinate system be as follows. Assign a point on the axis at time 0 as the origin of the coordinates of the system. The “zero” of the system is placed in a certain point on the axis at time 0. The axes and are the perpendiculars to the axis through chosen in the following way. The axis is vertically up; the axis is horizontal from left to right. The rotation axis at time 0 obviously coincides with the axis , which does not participate in the description of the considered flat-parallel motion. The unbalance center of mass is denoted by , . The unbalance phase is the angle from the lower semi-axis counterclockwise to the ray from to .

where is the unbalance weight.

where is the unbalance inertia moment, is some coefficient. 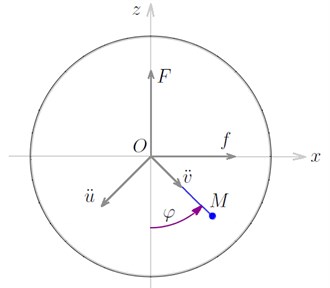 From here, the horizontal axis acceleration is obtained analytically according to the connection:

where and are the effective stiffness coefficients of the springs that connect the body with the cone and the body with the base, respectively. The term is an approximate model of crushing, and is destined for further discussion. At idle, this model rather adequately describes the cone friction on the guides.

The value is the unbalance inertia moment with respect to the axis . It yields:

Solving Eqs. (6)-(8) analytically is difficult. Therefore, they are researched with numerical methods. The time for reaching the stationary mode and the amplitude of the body and the cone oscillations in it for different values of and are of interest.

According to the unbalance geometry, its inertia moment is calculated 0.295 kg∙m2.

Thus, the partial frequency of cone natural oscillations without friction is 127.9 rad/s. The partial frequency of body natural oscillations with the fixed cone is the same. The unbalance rotation at resonant frequencies is of interest. That is, about 20 rev/sec = 1200 rev/min. This corresponds to a somewhat higher rotational speed of the stator magnetic field, which is included into the considered range.

Numerical integration made it possible to obtain graphical dependences of body and cone motions on time, frequency and slip friction coefficient .

As can be seen in Fig. 3(a), when the rotation frequency of the magnetic field is close to resonant, the friction is large, the beating is absent both on the body and on the cone, the amplitude of the cone reaches maximum values, which essentially determines the resonance.

As can be seen in Fig. 3(b), the rotation frequency of the magnetic field slightly exceeds the cone resonance frequency. During the acceleration of the rotor, it passes the resonant frequency. Therefore, at this time the oscillation amplitudes of the cone and the body reach maximum values.

As can be seen in Fig. 3(c), the relatively small friction 20 gives “beating” at the magnetic field rotation frequencies that exceed the resonant ones. The body beats are hardly noticeable, and the cone amplitude changes twice.

Numerical experiments showed that the crusher behaves in the classical way in a situation with a resonance. That is, a gradual amplitude increase of the oscillations with an exit to some stable state with the maximum amplitude of the oscillations. At the same time, it has interesting motion features of crusher parts when the rotation frequency of the magnetic field exceeds the resonant one.

The constructive elimination of “swinging”, horizontal and spiral motions of the body and the cone opens up access to the modeling of the crushing process using delta functions, which can be integrated in the form of a simple saltatory decrease in the cone speed [6]. Also, perhaps more important, it opens the way for operational optimization of the crushing mode through the rotation frequency control of the stator magnetic field [7].