Copyright © 2019 Xin Zhang, et al. This is an open access article distributed under the Creative Commons Attribution License, which permits unrestricted use, distribution, and reproduction in any medium, provided the original work is properly cited.

The rolling bearing is an essential element widely used in the rotating machinery. Bearing failures are among the main reasons for breakdown of rotating machinery. Therefore, fault detection of bearing is necessary to reduce the probability of breakdown and safety accidents. A novel fault diagnosis method for rolling bearing based on Refined Composite Multiscale Dispersion Entropy (RCMDE) and Improved Support Vector Machine (ISVM) is presented in this paper. The RCMDE is a new irregular index in biomedical signal analysis, which has lower computational cost and more stable results. Therefore, the RCMDE is introduced as fault feature to represent the bearing fault characteristics. After feature extraction, an improved support vector machine based on whale optimization algorithm (WOA) and support vector machine (SVM) is proposed as a fault classifier, which has the advantages of less training samples and good classification effect. The effectiveness of the proposed method in bearing fault diagnosis is verified by using bearing fault experimental data.

So far, many methods have been proposed and applied to bearing fault diagnosis. According to the source of the signal, the method can be divided into the following categories, such as vibration analysis [1, 2], oil analysis [3, 4], infrared thermal imaging [5-7] and acoustic emission analysis [8-10]. Compared with other methods, the signal acquisition and analysis of vibration analysis are easier to implement. Therefore, various vibration analysis methods have been introduced in fault diagnosis of rolling bearings, such as autoregressive model [11, 12], spectral kurtosis [13-15] and kurtogram [16], wavelet transform [17, 18], matching pursuit order tracking [19, 20] and empirical mode decomposition [21, 22]. Although the above methods have been proved to be effective tools of fault diagnosis for rolling bearings, but the process of these methods is not simple enough, which is not conducive to the practical application of engineering. Aiming at the shortages of above methods, an intelligent fault diagnosis method for rolling bearings based on refined composite multiscale dispersion entropy (RCMDE) and improved support vector machine (ISVM) is proposed in this paper.

The RCMDE is extracted as bearing fault feature in the proposed method. The RCMDE is a new irregular index proposed by Azami [23] and applied it to biomedical signal analysis. Compared with multi-scale sample entropy [24] and multi-scale fuzzy entropy [25], RCMDE has lower computational cost and more stable results. For these reasons, the RCMDE is a simple and effective feature extraction method which has more potential to be applied in engineering practice. Therefore, the RCMDE is proposed as a feature parameter reflecting fault state of rolling bearings. After fault features extraction, the improved support vector machine (ISVM) based on whale optimization algorithm (WOA) [26] and support vector machine (SVM) is proposed as fault classifier for rolling bearings. The SVM has the advantages of fewer training samples and faster calculation speed, which is beneficial to the practical application of engineering. The change of regularization factor and kernel parameter of support vector machine will determine the performance of classification. Therefore, this paper proposes an improved support vector machine (ISVM) whose parameters are optimized by WOA.

The Fig. 1 illustrates the framework diagram of the proposed method. Firstly, the original bearing fault signal is collected from rolling bearing fault test rig by sensors. Then the RCMDE values of vibration signals are calculated to form eigenvectors as the input of ISVM. Subsequently, the ISVM is trained by using training data and the ISVM optimal model is obtained. Finally, the ISVM optimal model is used to classify the test data, and the fault diagnosis results are obtained.

The article is arranged as follows. The theory of refined composite multiscale dispersion entropy (RCMDE) is introduced in Section 2. Section 3 describes the improved support vector machine (ISVM) based on whale optimization algorithm (WOA) proposed in this paper. Section 4 investigates the effectiveness of the proposed method through experimental data. And the conclusions are drawn in Section 5.

(1) Mapping time series into from 0 to 1 using normal distribution function as follows:

where and represent expectation and variance respectively.

where is an integral function and is the number of categories.

(3) Then calculate the embedding vector as follows:

Among them, and are embedding dimension and time delay respectively.

(5) Calculate the probability of each dispersion pattern as follows:

where represents the number of mappings from to .

(6) According to the definition of Shannon Entropy, the dispersion entropy of the original signal is defined as follows:

The calculation steps of RCMDE are shown as follows.

For the original data , the th coarsening sequence can be obtained as follows:

For each scale , RCMDE is defined as follows:

where is the average probability of the dispersion pattern of the coarse-grained sequences .

3. The improved support vector machine based on whale optimization algorithm

Simplify and amalqamate the above two constraints into:

The objective function for finding the optimal classification hyperplane is:

where , are Lagrange multipliers. For Eq. (8), the partial derivatives of , and are calculated and made equal to 0. After calculation, the following formulas are obtained:

According to the Karush-Kuhn-Tucker (KKT) condition, the following conditions are needed to solve this optimization problem:

The inner product in the feature space can be replaced by according to the Mercer condition. Thus, the above problems can be transformed into the following binary programming problems:

After solving the above problem, the optimal classification function is obtained as follows:

where is the kernel parameter. 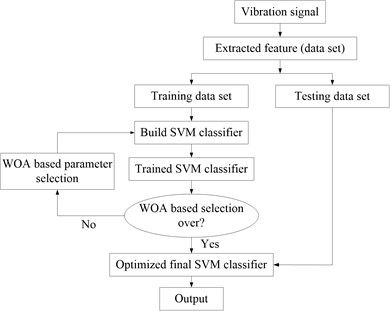 where is the cross validation accuracy of SVM using the parameters and . The parameter optimization process of the improved support vector machine presented in this paper is presented in Fig. 2.

In this section, the fault data of the Case Western Reserve University are employed to verify the performance of the proposed means in bearing fault detection, and the test rig is presented in the Fig. 3. The test rig consists of a motor, a torque sensor, a power tester and an electronic controller. In the case, the type of fault bearing is SKF6205. The data includes four states: normal state, inner ring fault, outer ring fault and rolling element fault. The inner ring fault, outer ring fault and rolling element fault have several sizes of 0.007 inches, 0.014 inches and 0.028 inches respectively. Usually, bearing faults with smaller sizes are difficult to identify, so the fault data of 0.007 inches size are selected to verify the proposed method. If the fault state data of small size can be correctly identified via the proposed method, it shows that the fault state data of other sizes can also be identified by the proposed method. All the vibration data of fault bearing was recorded for motor loads of 0 to 3 horsepower (motor speeds of 1797 to 1720 RPM). In the case, the data under all working conditions are mixed together and identified by the proposed method. The data of each state is divided into 40 samples, a total of 160 samples. Among them, 64 samples were used as training samples and the remaining 96 samples were used as test sample. 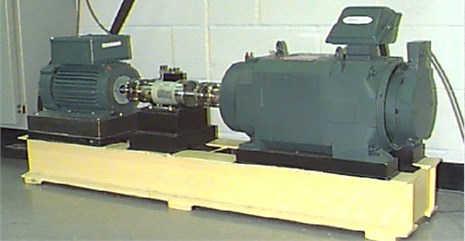 Referring to the setting of RCMDE parameters in literature 12, the embedding dimension , time delay and number of classes are set to 1, 1 and 6 respectively. The scale factor of RCMDE is set to 5 in the case study. After calculation, the RCMDE value of the training sample is shown in the Fig. 4. As shown in the Fig. 4, RCMDE value of four states can be roughly distinguished under different scale factors.

After calculating RCMDE, the feature vector composed of RCMDE is extracted as the input of ISVM. Then the training samples are used to train the ISVM to obtain the optimal ISVM classification model. The WOA parameter settings in the ISVM are shown in the Table 1. The optimized kernel parameter and regularization parameter are 4.5817 and 2.4198 respectively after optimization. The diagnosis result is presented in the Fig. 5. As shown in the Fig. 5, the fault diagnosis results are in good agreement with the actual state. After calculated, the recognition accuracy of bearing fault pattern is 100 %. It is illustrated that the method is effective for fault diagnosis of rolling bearings. 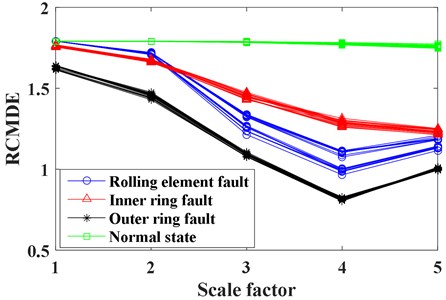 In order to further prove the effectiveness of the proposed method, the proposed method is used to diagnose the bearing fault dataset provided by Society for Machinery Failure Prevention Technology (MFPT). The bearings used in the case are NICE bearings. The bearing fault data set contains the following states: baseline (good condition bearing), inner race fault and outer race fault with various loads. The location of outer race fault and inner race fault of the bearing are shown in the Fig. 6. The data of each failure state are divided into 84 samples, a total of 256 samples, half of which are training samples and the other half are test samples. 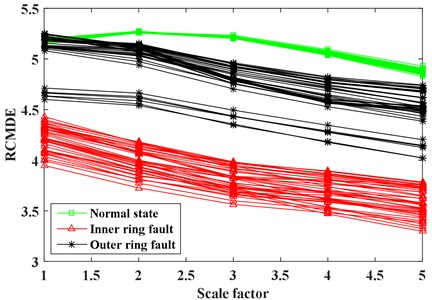 The RCMDE is extracted to form feature vector as input of ISVM. Then the training samples are used to train the ISVM to obtain the optimal ISVM classification model. The parameter settings of WOA are the same as in the previous case. The diagnosis result is presented in the Fig. 8. As shown in the Fig. 8, the fault diagnosis results are in good agreement with the actual state. After calculated, the recognition accuracy of bearing fault pattern is 100 %. It is illustrated that the method is effective for fault diagnosis of rolling bearings.

In this paper, a novel method based on RCMDE and ISVM is presented for fault detection of rolling bearings. Due to RCMDE has the advantages of low computational cost and stable results, RCMDE is employed as the feature parameter to reflect the fault state of rolling bearings in this paper. The ISVM is proposed as a classifier for fault detection of rolling bearings, which has the advantages of less training samples and good classification performance. The experiment data from Case Western Reserve University and MFPT are used to verify the effectiveness of the proposed method. The experimental results show that the proposed method is effective in bearing fault diagnosis.