Study on the dynamic characteristics of solidified silt under dynamic load

Copyright © 2019 Shuo Jiang. This is an open access article distributed under the Creative Commons Attribution License, which permits unrestricted use, distribution, and reproduction in any medium, provided the original work is properly cited.

The treatment and utilization of silt have always been a difficult problem in the field of engineering construction. Because of its high natural moisture content, low permeability and strength, rheological property and rich organic matter, the silt soil cannot be directly used in engineering practice. Under this background, in order to further explore the dynamic characteristics of solidified silt under dynamic load, a shallow mud along the coast of the Pearl River Delta in Guangdong Province was used as raw material, inorganic liquid solidifying agent and 32.5 ordinary Portland cement as solidifying agent. The dynamic characteristics of silt and solidified silt with age of 7 days and 28 days were studied by means of dynamic triaxial tests. The loaded samples were analyzed by SEM in laboratory. The experimental results show that the dynamic characteristics of the solidified silt soil under dynamic load are much better than that of the remoulded soil, and the solidification effect of the solidified silt soil with an age of 28 days is more obvious. The results can be applied to practical engineering practice. 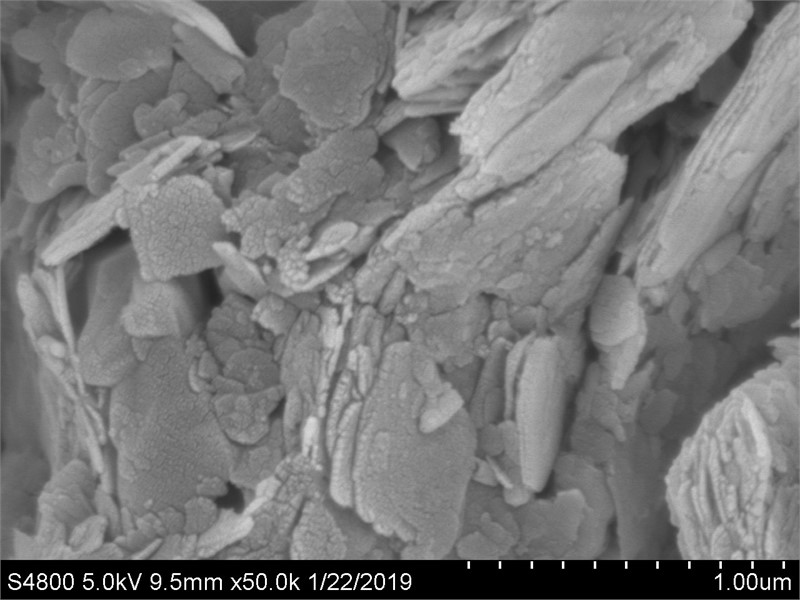 The pearl river delta in China has a developed water system with a large amount of deep silt. The presence of a large number of silt in the stratum need to conduct reinforcement treatment inevitably not only for railways, highways, bridges and subways, but for the construction of residential, office buildings and other projects. The traditional treatment methods of silt soft soil foundation are mainly consisted of riprap, compaction and silting, excavation and replacement [1]. However, these methods have many limitations in practical engineering application, which not only produce a lot of wastes, but also cause irreparable damage to natural resources due to engineering excavation. Therefore, how to deal with the characteristics of silt in engineering is particularly important.

At present, for the treatment of shallow silt, the methods such as improved soil filling and in situ curing can be mainly adopted [2]. Although the improved soil filling method has some advantages in price, but by considering the social costs such as abandoned land acquisition and earthwork transportation, the in-situ solidification treatment of silt has more advantages.

Therefore, in order to study the dynamic characteristics of silt soil after reinforcement under dynamic load, this paper, taking the shallow silt soil as the raw material from the coastal at Guangdong pearl river delta region, combining with inorganic liquid curing agent and 32.5 Portland cement as additives, and by using SDT - 10 computer control electro-hydraulic servo soil dynamic triaxial testing machine to carry out the indoor dynamic triaxial test, at the same time using scanning electron microscope to microscopic observation of the samples after test.

The physical and mechanical properties of silt are shown in Table 1. It can be seen from the table that silt has a high natural moisture content and is in a state of near saturation (saturation is greater than 98 %). Organic matter content in silt is 5.815 %, belong to organic matter soil. The results of quick shear test and unconsolidated and undrained triaxial test show that the shear strength of silt in this site is very small, almost with no strength. The liquid limit and plastic limit of the silt indicate that the silt is in a state of flow plasticity and has high compressibility.

Considering the natural structure of silt and the influence of soil disturbance on the test results, the soil sample was remolded before the test. During remolding, the moisture content of the sample at 30 % of the optimal construction moisture content was selected. According to the Railway engineering geotechnical test code (TB 10102-2010), the operation procedure is carried out.

The silt used in the experiment was taken from shallow silt at the bottom of a reservoir in the pearl river delta region of Guangdong. In the sampling process, the soil depth of the silt is 0.5-3.0 m, and the lower part of the silt is the sand layer. The curing agent is a “Xiyang brand” F type liquid curing agent produced by Dalian Xinyang Waterproof Engineering group Co., Ltd. Cement is 32.5 ordinary Portland cement.

The study on the dynamic characteristics of soil mass under train load is determined by the reasonable simulation of traffic load by indoor tests. However, due to the different research emphases of indoor dynamic test in simplified simulation of traffic load, or due to the limitation of test conditions, its dynamic simulation and test scheme design are different. At present, the research results of dynamic stress field caused by traffic load show that the stress borne by soil body under traffic load varies. Therefore, the variation of confining pressure from 50-120 KPa and the amplitude of axial load from 50-120 N are proposed in this test. In this paper, the confining pressure and dynamic load change at the same time, and the stress level generated under different confining pressure and dynamic load conditions is different. In this agreement, the maximum deviatoric stress value in a certain state is used to represent the stress level in this state.

The effect of railway train running on soil is closely related to loading frequency, drainage conditions, cycle times, axial load amplitude, confining pressure and other main factors. The frequency range of dynamic wave used in many related literatures is 0.1-10 Hz, in which 1-2 Hz is the main frequency. In this study, it is proposed that all tests are carried out under the condition of frequency of 1 Hz. In addition, under the long-term action of train load, the actual drainage is between complete drainage and no drainage. However, due to the uncertainty of the development of cumulative deformation under the condition of no drainage, the test under the condition of no drainage can better reflect the dynamic response of natural soil under dynamic load. Therefore, in order to guarantee the authenticity of the test, dynamic test in undrained conditions was used. Through the cycles and certainly change the size of the stress level test, thereby gaining undisturbed silt soil with different ages solidified mud soil stress level and the relationship between the maximum strain.

In order to eliminate interference, the test cycles in this experiment, it need to control cycles for 400 times and set the confining pressure from 50 to 120 KPa. The axial load amplitude varying from 50 to 120 N to simulate different speed of train set of dynamic load. The maximum strain change rule of solidified mud soil and undisturbed silt soil with different ages under different stress level conditions was discussed. Specific test control conditions are shown in Table 2.

Cycle number refers to the repeated action of load on soil in a certain period, which can be called cycle effect. Because the train tire runs back and forth on the railway, the dynamic load generated by it may also cause fatigue strength failure of the soil after repeated several times. Therefore, cycle number is also an important parameter affecting soil dynamic characteristics. In this test, by controlling the confining pressure of 50 KPa, the axial load amplitude of 50 N, and the number of cycles from 100 to 1000, the change rule of cumulative strain between undisturbed silt and solidified soil of different ages under different cycle times was discussed. Specific test control conditions are shown in Table 3.

2. By comparing the change curves of undisturbed silt and solidified silt at different ages, the maximum strain of silt with curing agent is far less than that with undisturbed silt. 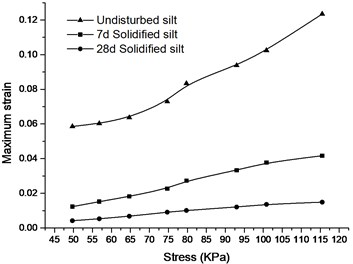 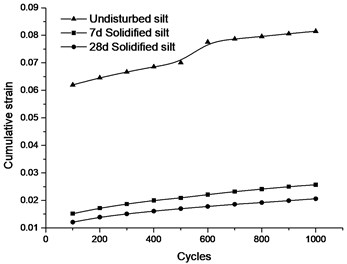 Fig. 2 shows that the amplitude of confining pressure and axial load is constant, and the cumulative strain of silt increases with the increase of cycle times. But the accumulated strain of solidified silt is much smaller than that of undisturbed silt under the same condition. This indicates that the addition of curing agent improves the stiffness of silt.

Under the same test conditions, the dynamic responses of undisturbed silt and solidified silt at different ages are not the same under different cycles. With the increase of cycle times, the accumulated strain of soil increases. With the same vibration times, the accumulated strain of undisturbed silt is much higher than that of solidified silt, indicating that the dynamic stability of silt is improved after adding curing agent.

Under the action of the same cycle times, the cumulative strain of the 28d solidified silt is all less than that of the 7d solidified silt, indicating that with the development of time, the hydrolysis hydration reaction of cement and liquid curing agent have more obvious solidification effect on soil particles.

Before the test, the interference of water on the test results was removed. Samples were taken from the undisturbed silt and the 7d and 28d solidified silt test blocks under the action of 400 cycles, confining pressure of 70 KPa and axial load amplitude of 70 N. After drying, the samples were placed on the observation table for observation. After the experiment, the size, shape and density of soil particles and hydration products of undisturbed silt and solidified silt at 7d and 28d were observed at multiples of 10 µm and 1 µm. The internal relation between the difference of soil microstructure and its mechanical properties is analyzed. 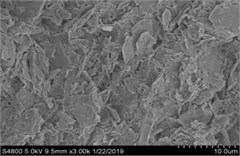 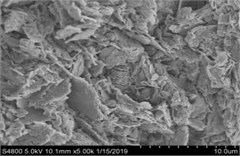 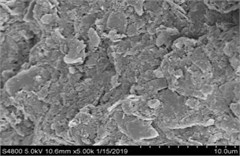 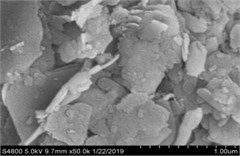 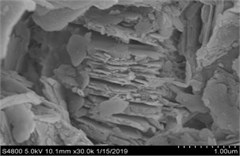 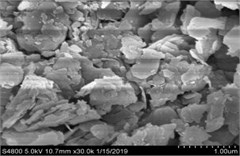 By observing Fig. 3(a), it can be found that the connection between undisturbed silt and soil is good, indicating that under the action of 400 cycles, 70 KPa confining pressure and 70 N axial load, the soil becomes compact and the soil remains intact. Looking at Fig. 4(a), the particles in the soil are not evenly distributed and the connection between the soil particles is weak, indicating that there are large pores in the soil with low strength.

In this paper, based on the dynamic characteristics of the silt soil under the action of dynamic load caused by train, analyzes the different stress level and different cycles under the action of undisturbed silt soil and the change trend of different ages of the solidified mud soil strain. At the same time, through SEM test methods describe the structural morphology of silt soil, obtain the change rule of silt soil under dynamic action:

Under the action of different stress levels and different cycles, the curing agent improves the dynamic stability of silt under dynamic action and improves the stiffness of silt.

Maximum strain of silt under different stress levels; the number of cycles is positively correlated with the cumulative deformation of silt.

Based on the results of this study, we will explore the critical dynamic strength of undisturbed silt and solidified silt at different ages under different stress levels, analyze the improvement of soil strength by curing agent, enrich the theory of solidification mechanism of silt, and promote the application of solidification treatment of silt in railway engineering.