Copyright © 2019 Akshaj Kulshreshtha, et al. This is an open access article distributed under the Creative Commons Attribution License, which permits unrestricted use, distribution, and reproduction in any medium, provided the original work is properly cited.

In this paper sound radiation of simply supported rectangular plate has been reported. The novelty in this research paper is a new method is prescribed for sound radiation calculation. The phenomenon of uncoupled structural acoustics have been followed such that structure is the critical part in structural vibration using modal analysis and harmonic response calculation for frequency range of interest 0 to 200 Hz, but in harmonic acoustic analysis the structure does not takes part in physics point of view but is used for only for transferring the normal velocity from wetted surface of the structure to the interface acoustic medium i.e. air. Sound Radiation parameters like Sound Pressure Level, Sound Power Level and Sound Radiation efficiency has been reported. Upon comparing the results with that from I. Zaman’s literature, it is found that the results are quite varying due to the fact the speed of sound in air as taken in literature is unjustified. So true simulation using correct data has been carried out in this paper and sound radiation results has been reported for frequency range of interest 0 to 200 Hz. It is found that the maximum sound pressure level is 72 dB and maximum sound power level is 78 dB which is suitable for noiseless environment.

Thin plates are widely used in many industries such as aircraft, automobile due to light weight. which is the cause of vibration and noise. These plate structures are subjected to externally induced vibrations which cause sound radiation. Therefore, the estimation of sound radiation parameters such as Sound pressure level, Sound power level and radiation efficiency are important which are carried in this paper.

Acoustic radiation is generally characterized by sound power calculations. Let us consider a rectangular plate of dimension surrounded by an infinite baffle vibrating in an light acoustic domain i.e. air. The acoustic pressure at any observation point on the surface of the plate due to normal velocity of the plate at point can be written using Rayleigh integral [7] as:

where, is the density of air, is the circular frequency of the plate vibrations, is the speed of sound in air, is the distance between the point and , i.e. is the acoustic wave number and . Thus, sound intensity any point can be given by:

Thus the sound power level in decibel can be written as:

where 10-12 watts is the reference acoustic power in watts

The radiation efficiency can be calculated after deducing the sound power level using is given by:

where is baffled piston radiation power given by:

Thus, using the above mathematical formulation, the acoustic intensity, acoustic power and acoustic radiation efficiency can be calculated.

The mode shape function for simply supported rectangular plate is given by the formula:

where , modal integers and are the length and width of the plate respectively.

3. Finite element modeling of the plate

The geometry of plate taken was 0.2×0.2×0.0001 m. Material used was stainless steel 304 and boundary condition taken were simply supported.

The Young’s modulus elasticity, density and Poisson’s ratio of stainless-steel material were taken as 200 GPa, 7850 kg/m3, and 0.3 respectively. The density of air medium and speed of sound in air were taken as 1.21 kg/m3 and 343 m/s.

The solid rectangular plate is modeled in Ansys19.2 [8]. Each element in the discretized structure represents flat elemental surface for which Rayleigh integral is mostly suited. The modal analysis and harmonic response analysis are carried with simply supported boundary condition and with unit load of 1 N acting at the center of the plate. The Fig. 2 shows the spherical solid enclosure composed of acoustic medium air enclosing the plate at the centre. The outer surface of the enclosure is used as radiation boundary resulting in non-reflection (infinity) boundary condition.

The frequency range of interest for extracting harmonic response analysis is 0 Hz to 200 Hz. The normal velocity and displacement data for top surface in contact with acoustical interface is extracted as results for use in harmonic acoustic analysis. 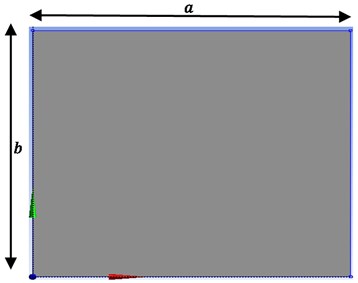 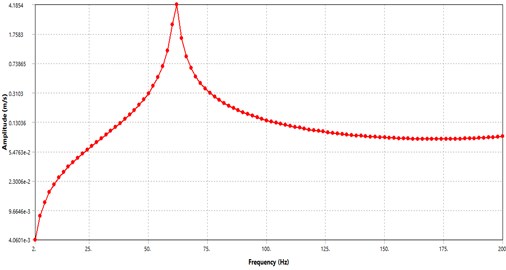 The sound pressure level is calculated using Rayleigh integral. Sound pressure level is a parameter that signifies the amount of sound radiated from vibrating structures. For lower frequency upto 20 Hz rate of increment in SPL is higher as compared to that of frequencies greater than 20 Hz.

In this paper acoustic radiation of vibrating simply supported rectangular plate placed in an infinite baffle have been analyzed numerically using Ansys19.2. The vibration characteristics of the plate due to forcing function gives us the vibrating normal velocity at each nodes of the plate numerically. These nodal velocities are applied as boundary condition for harmonic acoustic analysis in Ansys19.2. The sound radiation parameter as calculated and reported are sound pressure level and sound power level and sound radiation efficiency and it is found that far field acoustic pressure level at point (0, 0, 0.8) is found to range between 22 dB to 72 dB while sound power level ranged from 42 dB to 78.002 dB for a frequency range of interest 0 to 200 Hz. The sound radiation parameters are calculated are suitable for noiseless environment as there below the critical sound power level.