Copyright © 2020 Xiaofei Xu, et al. This is an open access article distributed under the Creative Commons Attribution License, which permits unrestricted use, distribution, and reproduction in any medium, provided the original work is properly cited.

In the paper, the model of micron-level crosstalk interconnections was constructed based on FR4 substrate. By changing the input variables of the length and the spacing, this prediction model could provide useful information for Crosstalk intensity. With the increase of the length of the interconnect, the crosstalk intensity of the proximal end and the distal end increased. When the interconnect spacing increased, the trend of crosstalk was not changed, but the intensity decreased gradually. Which provided an experimental reference for future methods of reducing crosstalk from the perspective of physical structure.

Capacitive current was formed by capacitive coupling between two interconnects:

As shown in Fig. 1, there were two independent branch currents from the capacitive coupling current on interconnecting 2:

Normally, when the low frequency signal was transmitted, the distribution parameters of interconnects need not be considered; When high frequency signal was transmitted or being radiated by high frequency and high energy signals (the frequency was about 30 MHz or more, including microwave frequency band), the electromagnetic effect of parallel crosstalk interconnects would generate circuit distribution parameters, as shown in Fig. 2. The equivalent circuit models of lossless crosstalk coupled interconnect were shown in the follow.

According to Kirchhoff’s law of voltage, the DC resistance voltage divider in high frequency range was neglected. The voltage equations of metal interconnect 1 and interconnect 2 of substrate was as follows:

Similarly, by applying Kirchhoff’s current law, it could be seen that the DC resistance voltage divider in the high frequency range was neglected, and the current equations of the metal interconnects 1 and 2 on the substrates were as follows:

So all the analytic results indicated that the reasonable equivalent circuit could substantially show the impacts of these parasitic capacitances, the attenuation of signal, the noise signal and coupling signal.

In the paper, there was constructed the model of micron-level parallel crosstalk interconnections based on FR4 substrate as shown in Fig. 3. There were three important structural parameters of the interconnections, including the width parameter, the length parameter, and the spacing parameter.

The crosstalk intensity was analyzed by FDTD method between parallel interconnects of integrated circuits in Fig. 3. The thickness of semiconductor substrates was 800 um, and insulating layers were 0.58 um, the thickness of interconnect was 35 um, the relative dielectric constants were 4.4 respectively. Considering the symmetry of the structure, a magnetic wall was set on the 0 symmetry plane and only the region of 0 was calculated to reduce the calculation by half thus.

3.1. Near and far end of crosstalk strength structure interconnects 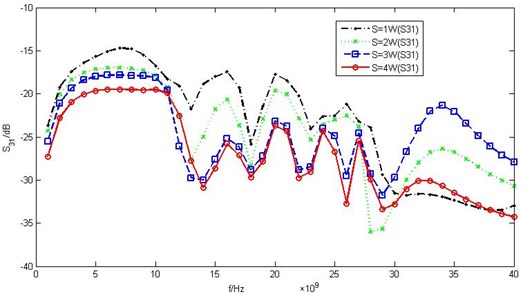 At the same time, when the interconnect spacing increased, the trend of crosstalk change remained unchanged, but the intensity of crosstalk decreased gradually. Obviously, when the line spacing exceeds three times the line width, the far-end crosstalk and the near-end crosstalk do not change much. This showed that the line spacing was no longer the main factor affecting crosstalk, so the interconnect spacing should be increased to three times as much as possible in the design. 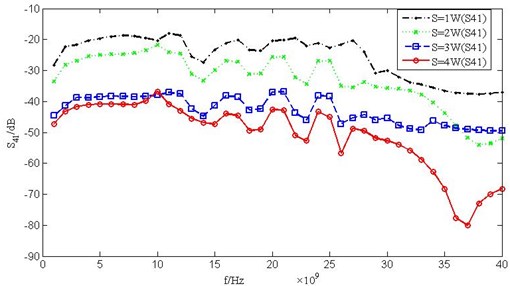 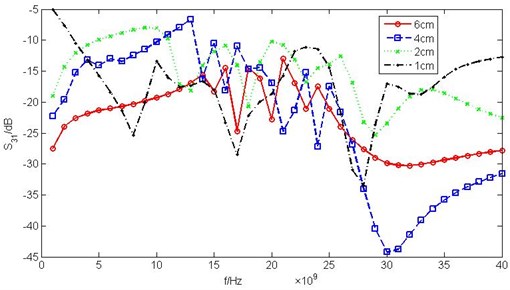 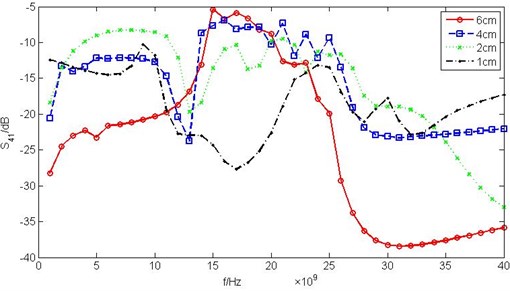 In addition, it could be seen from Fig. 6(a) that the longer the interconnect, the higher the oscillation frequency of the near-end crosstalk; from Fig. 6(b), it could be seen that the longer the interconnect, the greater the oscillation amplitude of the near-end crosstalk. Therefore, planning the design of RF circuits, shorter routes should be used to minimize the length of routes.

In the paper, the laws of physics were studied on the model of micron-level crosstalk interconnections, which was constructed based on FR4 substrate. It was completed a series of simulation experiments and physical experiments by changing the input variables of the length and the spacing. With the increase of the length of the interconnect, the crosstalk intensity of the proximal end and the distal end increased. When the interconnect spacing increased, the trend of crosstalk was not changed, but the intensity decreased gradually. The simulation data was consistent with the experimental data to show that the crosstalk interconnections model was accuracy and high efficiency.