Copyright © 2020 X. Wang, et al. This is an open access article distributed under the Creative Commons Attribution License, which permits unrestricted use, distribution, and reproduction in any medium, provided the original work is properly cited.

Gear meshing dynamic model is the most important part in the whole wind turbine system which is used to carry out operation conditions simulation in off-line case. By simulating the normal gear meshing and the gear meshing with broken teeth in wind turbine dynamic model respectively, the difference in generator current can be observed. The method we propose is to monitor the operating condition of the wind turbine based on the current transmitted to the generator end dynamically according to the meshing of the gear pair. Mechanical parameters have great influence on the system that will be transmitted to asynchronous generator, it works in a quite different approach compared with traditional method on vibration monitoring using sensors. 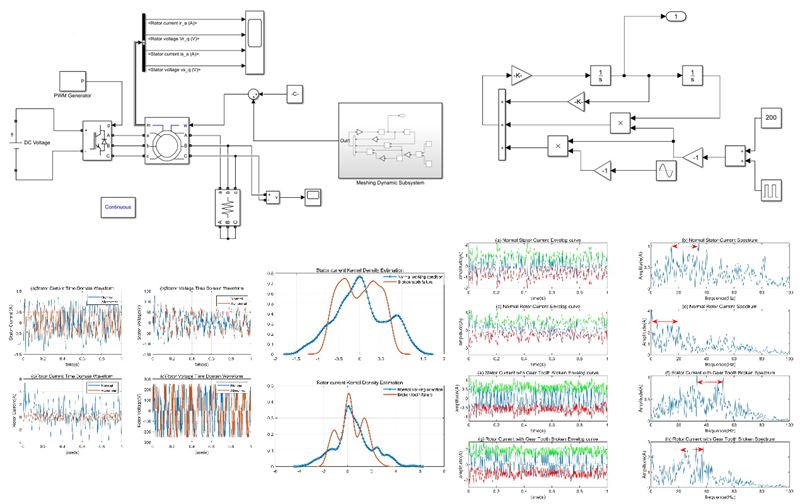 The main mechanical failure [1, 2] of wind turbines occurs on two key components of gears [3] and rolling bearings [4]. The measured physical quantities of conventional fault diagnosis are generally vibration signal [5] related parameters namely displacement, velocity and acceleration. However, by arranging the vibration measuring sensor at the monitoring point for detection, the error is relatively large. Because the position of the sensor often has a certain distance from the vibration source, the influence of the distance on the measurement effect is difficult to estimate and accurately measure [6, 7]. In addition, the vibration displacement measured by the vibration sensor is also affected by the vibration of other equipment in the entire unit, which is coupled and difficult to distinguish. Air vibrations in the monitoring space are neglected in general vibration measurements. However, in actual mechanical operation, high-speed rotating equipment sometimes needs to consider the effects of air vibration. Therefore, the signal measured during the vibration measurement is doped with a large amount of noise unrelated to the vibration signal. Relatively speaking, the current signal [8-10] during the operation of the device is much more stable.

The current signal is accompanied by the entire operation of the wind turbine [11, 12], and the electrical parameters such as current [13-15] and voltage are important parameters of the wind turbine itself, and no additional sensors need to be installed. Its reliability and stability are thus somewhat higher than the vibration measurement process. The motor current signal analysis method [16] is also called Sensorless Detection Method. It was first proposed to be used in the research direction of asynchronous generator operation monitoring and fault diagnosis [17, 18]. This method of analyzing the corresponding signals by using the characteristics of the stator current signal of the motor has been detecting faults of the generator body, such as fault diagnosis of the stator [19], rotor [20] and air gap flux of the generator.

The structure of the gearbox [21] in a wind turbine is different from that of a general gearbox. The structure is usually composed of a sun gear, a plurality of planet gears, a ring gear, a planet carrier, etc., and the motion mode [22] in which the ring gear fixes the sun gear rotating around the central axis is the most common. The planetary gears not only rotate around their respective central axes, but also revolve around the central axis of the sun gear. The planetary gear train structure is shown in Fig. 1. 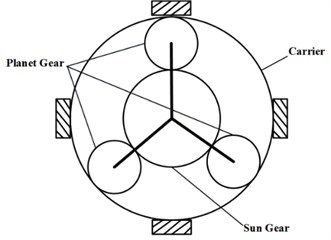 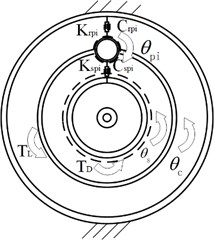 In this paper, a purely torsion model with concentrated parameters is used. As shown in Fig. 2, the gear mesh is considered as spring and damping, also each component only considers the vibration in the torsional direction. Among them, , , , are the meshing stiffness and damping coefficient between the sun gear and the planetary gear, the planetary gear and the inner ring gear respectively, and , and are the rotation angles of the sun gear. and are their input torque and load torque. According to the Lagrange equation, the pure torsional dynamic equation of the system can be showed in Eq. (1):

and , and represented as the equivalent mass of the sun gear, planet gear and planet carrier.

From the differential equations Eq. (4), two outputs can be obtained, which are the pitch line displacement caused by the meshing of the sun gear and the planetary gear, and the pitch of the pitch generated by the meshing of the planetary gear and the ring gear. In order to simplify the analysis of the movement of the planetary gear train, only the movement between the sun gear and the planet gears is considered here. Therefore, it can be further simplified here as the meshing motion between a pair of gears. The equations also show that the meshing stiffness and the external exciting force have a certain influence on the output of the system model. The basis of the identification and degree of fault diagnosis can also be determined by the change of these two parameters. Details of the movement of the sun gear-planetary after simplification will be detailed in the next section.

Considering the weight of the simplified sun gear-planetary model gear set weight model, the gear is equivalent to a set of springs. By considering a set of intermeshing gears as the object of study, the mathematical expression Eq. (5) of the differential equation of the geared pair:

In dynamic systems, the effect of static and elastic deformation on the overall system can be neglected under certain circumstances. Therefore, the Eq. (5) is simplified to obtain Eq. (6). After this section, if is not specifically emphasized, the default is the relative displacement of the gear mesh in dynamic situations: 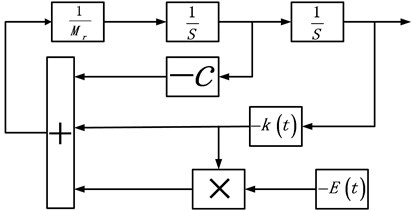 Consider an example, the number of teeth of the large gear is 34, the number of teeth of the small gear is 23, the modulus is 3, the tooth width is 20 mm, and the calculated mass considering the motor mass is 4.5 kg, 200-250 kN, 300 N.s/m. Fig. 4 shows the actual SIMULINK model. Because the time of the broken tooth failure is usually very short, the simulation time here takes 1 s. The input speed of the large gear end is 1200 r/min. 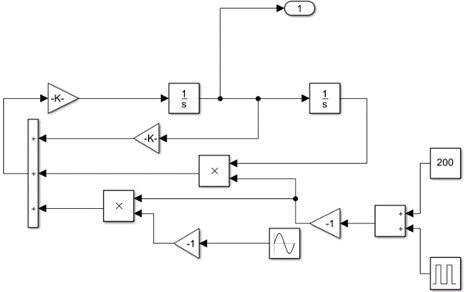 It can be known from Eq. (6) that when is set to a constant, the entire dynamic system is in normal motion. The simulation results obtained are shown in Fig. 5. The relative acceleration and relative velocity have a large change in the initial stage of the simulation, but when the whole dynamic system is in the state of steady state operation, both parameters approach a constant value. 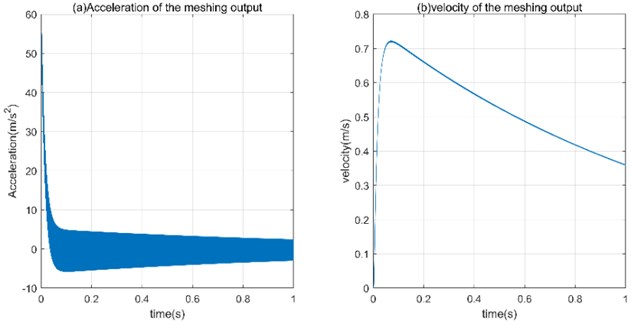 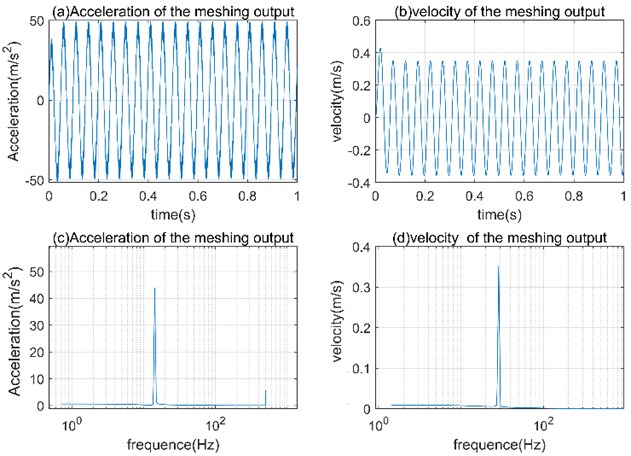 Doubly fed Induction Generator are often used in wind turbines for simulation of off-line conditions. Therefore, it is necessary to introduce the relevant theory of asynchronous motor in detail in this section as the theoretical basis for the construction of the subsequent simulation model. According to the AC generator theory, the dynamic characteristics of an asynchronous generator [24] in the - rotating coordinate system can be described by the following equation:

where: , and are the self-inductance and mutual inductance of the stator and rotor, respectively.

A dynamic model of the gear pair meshing has been established in Fig. 4 of Section 2.2. In this section, the above model is used to package the module using the sub-module packaging tool of MATLAB/SIMULINK. The block diagram after encapsulation is shown in Fig. 7. The normal operating conditions of the system and the broken tooth fault can be simulated by adjusting the parameters of the sub module. 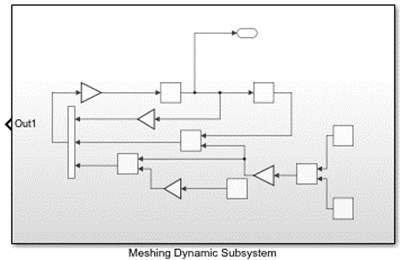 The twin-turbine generator model of the wind turbine is equivalent, and in the off-line condition, it is regarded as an asynchronous generator [23, 24]. Because the networked generator operating conditions are more complex, it is not conducive to the impact on the motor when the mechanical fault occurs, so this simplification will significantly improve the possibility of distinguishing the motor operating conditions. The system simulation model includes generator module, generator rotor variable frequency excitation module, load module, electrical parameter measurement module and gear fault simulation sub-module. The model of the doubly-fed generator is replaced by a wound-type asynchronous motor module to set the operation mode. The stator winding of the generator [25] is connected to the three-phase resistive load, and the PWM power inverter module is used to supply the generator rotor with one-way excitation, which only simulates the off-grid operation. The model built by the final simulation is shown in Fig. 8. 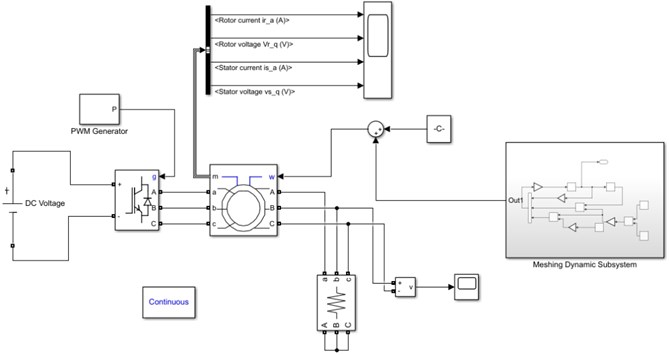 The basic parameters required for the simulation system are: generator rated power, rated voltage, rated speed, stator resistance, stator inductance, rotor resistance and inductance converted to the stator side, and stator and rotor mutual inductance. The coordinate system takes the synchronous reference coordinate system [26]. The status is zero. The mechanical input of the generator is set to the speed input, and the output of the gear fault simulation sub-module and the superposition of an average speed are taken. Since the output of the gear failure simulation sub-module is only a velocity fluctuation component, the average velocity value needs to be added. Detailed parameters are described in the Table 1.

4. Discussion and analysis of simulation results

Since the key parameters are the electrical parameters of the generator, the parameters such as electromagnetic power and rotor speed are not concerned, so they are not analyzed in detail. In the variable step size ode45 ordinary differential equations solution used in Matlab 2018b, the relative error between the step sizes does not exceed 1e-3. Because the entire equation system is solved in a variable step size, the sampling frequency is automatically set in Simulink. The four physical parameters of rotor current, rotor voltage, stator current and stator voltage are mainly analyzed in the following two subsections. In the Fig. 4 of Section 2.2, the simulation sub-model is established. The normal working condition of the gear is different from that in the broken tooth state. This difference is expressed by the external exciting force and the meshing stiffness function.

Fig. 9. Generator current and voltage waveform within a second 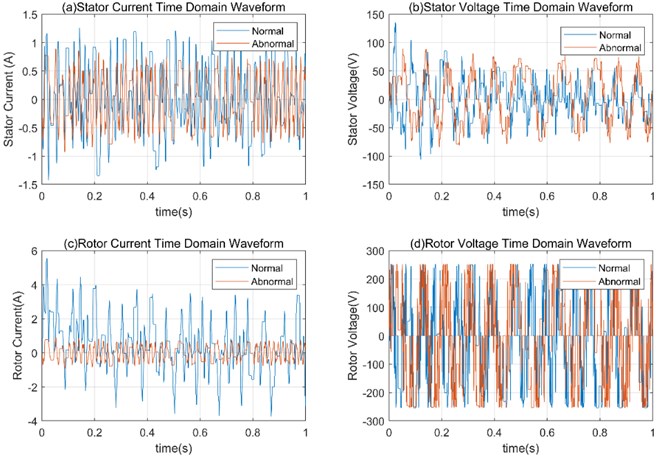 In addition, the load on the AC generator was not analyzed in this result. In fact, the RMS of the resistive load line voltage amplitude is a voltage drop under normal operating conditions and broken tooth fault conditions, and the numerical performance is reduced from 200 V to 100 V. This feature can only be used as an indicator for the rational use of the system to determine the operating conditions of the system.

As a common method in non-parametric estimation in probability theory, kernel density estimation (KDE) is used to estimate the unknown density function [29]. In our case, the kernel function we used to analyze current signals is Gaussian kernel function. Applying this method of estimating the density function to the stator current and the rotor current of the generator yields the results shown in Fig. 10. From the Gaussian kernel density estimation of the stator current, it is observed that the current value distribution under normal operating conditions is close to the Gaussian distribution, and the current distribution under the broken tooth fault has two distinct peaks, which are significantly different. The normal operating conditions of the stator current and the current distribution under the breaking condition are the difference between the single peak and the triple peak, respectively, and are also very easy to observe. Therefore, the above analysis by the characteristics of the generator current is possible as a method of fault diagnosis. 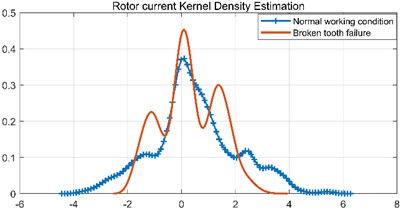 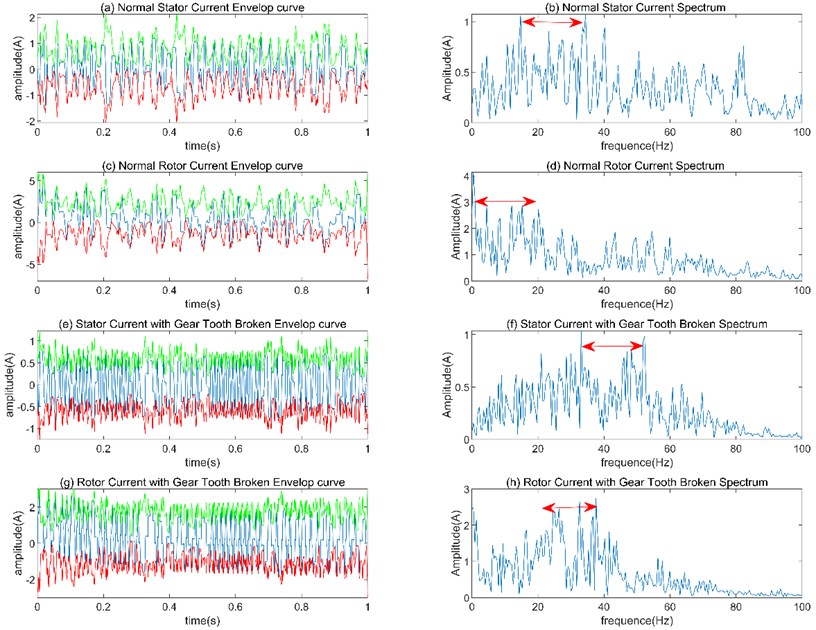 Wind turbine mechanical fault diagnosis can be achieved by analyzing the current of the generator and can be used to accurately monitor the operation conditions of the unit. From the point of view of the time-varying mesh stiffness of the gear tooth in the wind turbine gearbox, we explore it influence on the stator and rotor currents of the generator through simulation. This combination of a kinetic model with a circuit model for mechanical diagnosis is effective and does not require additional sensors to measure it. The difference in generator currents under normal and broken gear conditions can be used as a basis for evaluating the operation conditions of the wind turbine.