Copyright © 2020 Li Liu, et al. This is an open access article distributed under the Creative Commons Attribution License, which permits unrestricted use, distribution, and reproduction in any medium, provided the original work is properly cited.

This paper proposes a damage detection method based on an improved DAS imaging algorithm by introducing time difference due to anisotropy of composite material. First, the finite element characteristic frequency method is used to obtain the dispersion curve of the composite plate, and the validity of the dispersion curve is verified. Next, the average phase velocity of the Lamb wave at mixed modes in the composite plate is obtained by two-dimensional Fourier transform (2-D FFT). The mixed modal group velocity is calculated according to the corresponding phase velocity, the mean change rate of the phase velocity and the dispersion curve obtained by simulation. The time difference due to anisotropy of composite material is investigated, and the damage location is estimated by the delay-and-sum (DAS) imaging algorithm. Experiments on carbon fiber multilayer composite plates verify the effectiveness of the proposed method. 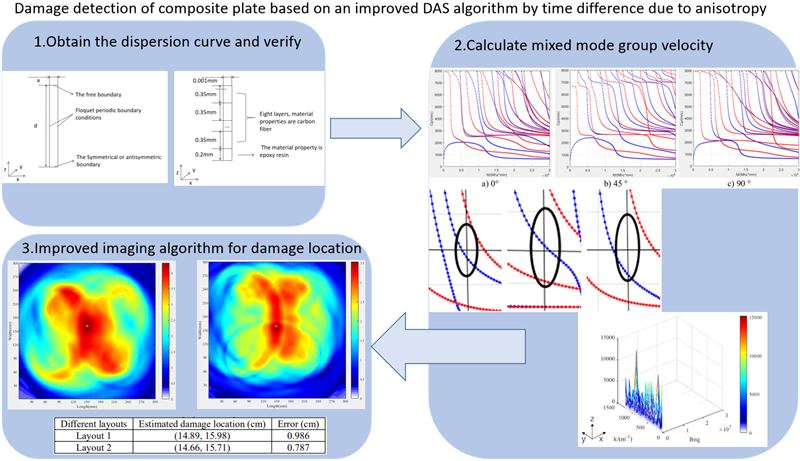 Composite materials have many applications in aerospace, machinery and other industries due to the characteristics of light weight, high strength and long life [1]. In order to avoid property damage caused by safety accidents, material damage needs to be detected. Among the many detection methods, ultrasound imaging has been widely used due to its characteristics of non-destructive detection.

Due to the characteristics of long Lamb wave propagation distance and sensitivity to damage, damage detection can be performed on plate-shaped composite materials. However, during propagation, Lamb waves have dispersion effects and multiple modes. In order to prevent modal aliasing, low frequency excitation signals or modal separation from the received signals are generally used for isotropic panels. However, because of the anisotropic characteristics of the layered composite plate and the variability of Lamb wave propagation between layers, the received signals from a multilayer composite plate are very complicated, thus it is difficult to perform modal separation. This brings challenges to signal analysis and damage identification.

The wave equation of free propagation in an infinite anisotropic elastic material, its displacement is expressed as:

The simple harmonic motion of the particles at their respective equilibrium positions is:

where is the vibration amplitude, is the angular frequency.

From Eqs. (1) and (2), the intrinsic equations in anisotropic materials are:

where is the material density; is the Kronecker delta; is the wave number; , , , is the tensor subscript.

Therefore, using the finite element simulation method to solve the problem of the free vibration equation of the structure can be simplified to solve the following characteristic equation:

In order to analyze the propagation characteristics of ultrasonic waves in plate-like structures, consider the following free boundary conditions:

where is the axial component of the normal vector outside the boundary unit.

According to Bloch-Floquet theorem, the solution of the wave equation has the following form:

where is Bloch wave vector. is a function with a spatial period and can be calculated as:

where is the lattice translation vector.

Due to the periodicity of the infinite plate structure and displacement, it is determined that the acoustic wave propagation characteristics in the plate can be studied by analyzing a period (a cell). Therefore, according to the periodic boundary conditions in the formula, the characteristic frequency corresponding to different Bloch wave vectors can be solved to obtain the dispersion relationship of the acoustic wave propagation in the plate.

The paper uses COMSOL MULTIPHYSICS finite element simulation software, combined with the finite element characteristic frequency method, to calculate the dispersion curve of the Lamb wave in the anisotropic composite plate [8, 10]. Considering the infinite plate structure with a thickness of 2 in the direction, in order to facilitate the calculation of the dispersion curve in the board, only the simulation model shown in Fig. 1 was selected. Use Floquet periodic boundary conditions in the direction ( in the figure is the distance between the source boundary and the target boundary). For the non-wave vector -direction inner boundary of the plate, it also needs to be considered as a periodic boundary and be processed accordingly. The characteristic frequency is solved according to the eigenwave vector in the direction. Due to the symmetrical (antisymmetric) boundary conditions, the vibrations in the plate are symmetrical (antisymmetric) about the center plane in the direction, so that the finite element model is simplified to half of the original model. The symmetric and antisymmetric modes of the dispersion curve are obtained by setting symmetric and antisymmetric boundary conditions, respectively. 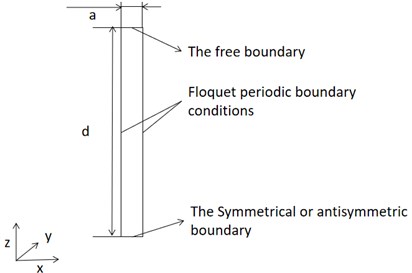 The finite element characteristic frequency solution method is used to calculate the dispersion curve of the single-layer carbon fiber composite board. The mechanical properties of 0° single-layer carbon fiber plate with the fiber direction in the direction are shown in Table 1. The carbon fiber density is 1800 kg/m3. takes 0.5 mm, a takes 0.001 mm. The elastic matrix of 45° and 90° fiber direction is obtained by transforming the values in Table 1. The dispersion curve obtained by the calculation is shown in Fig. 2. 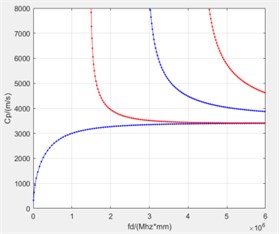 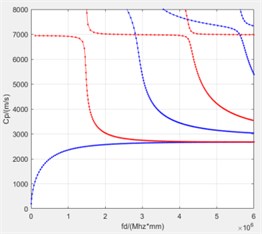 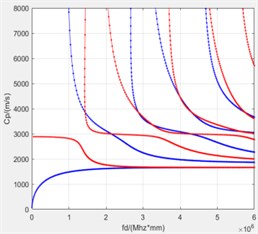 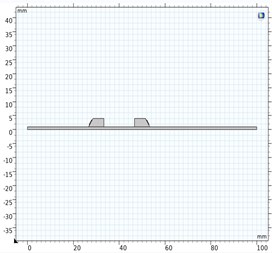 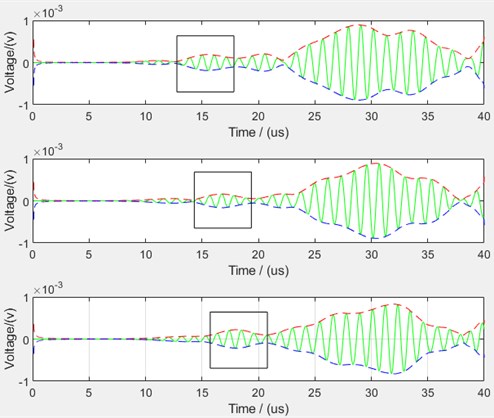 Take the envelope of the received signal in turn and find the peak time of the direct wave. The received signals with a propagation distance of 10 mm, 15 mm, and 20 mm in the 0° direction are shown in Fig. 3(b). The direct signal is inside the rectangular frame in the figure. The peak time of the direct wave obtained from the experiment is shown in Table 2.

The experimental results show that the theoretical value and the actual value are consistent, verifying the effectiveness of the method.

2.1.3. Calculation of dispersion curve of the multilayer composite plate 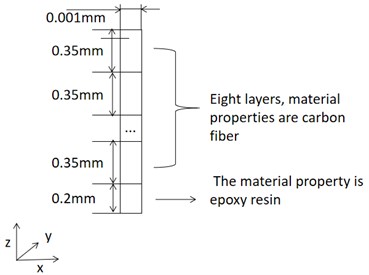 The material mechanical properties of carbon fiber layers are shown in Table 1. The Young’s modulus of the epoxy resin adhesive layer is 3.35 GPa, the density is 1150 kg/m3, and the Poisson’s ratio is 0.38. Take the fiber direction of the top layer of the multilayer composite plate as the 0° direction. The dispersion curve of the multilayer composite plate is shown in Fig. 5. 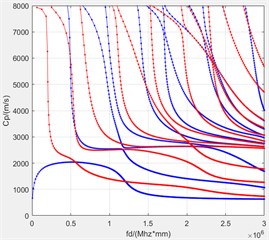 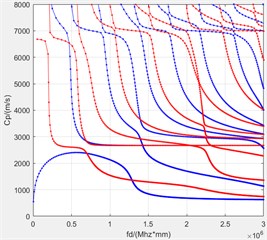 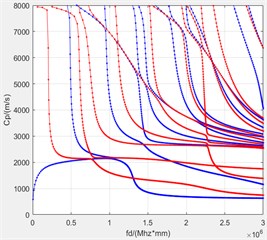 where is the signal in the time domain, is the angular frequency, is the wave number , is the phase velocity.

2.3. Imaging method based on average group velocity and DAS algorithm

Amplitudes in frequency domain and spatial domain for one group of the received signals on a non-damaged plate are obtained by two-dimensional Fourier transform, which indicates the energy of the received signal at a superposition of several modes. The two-thirds of the maximum amplitude is taken as a reference. The phase velocities in each group where the energy amplitudes are greater than the reference value are averaged to obtain a phase velocity for the mixed modes. The overall average phase velocity is averaged among multiple groups.

where is the frequency-thickness product, and is the number of modes selected near the average phase velocity.

The damage detection is performed using the delay-and-sum algorithm [4], as shown in Fig. 6. The scattered signal is obtained by subtracting the baseline signal from the signal in the damaged plate. As the wave speeds at different positions along the same direction of anisotropic composite plate are different, a non-damaged plate is used as a calibration. The time difference between signals of non-damaged plate is used as a time delay in the imaging method. The pixel value of each pixel in the pixel map is as follows:

can be calculated as:

where and represent the distances from the grid to the excitation sensor and the receiving sensor, respectively. 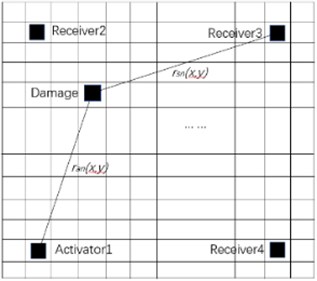 Experiments were performed on two multilayer T700 carbon fiber composite plates of the same size as shown in Fig. 7(a) and Fig. 7(b). The two composite plates are both 300 mm long, 300 mm wide and 6mm high, and the layers arrangement of the two plates are the same as described in Section 2.1. One plate is non-damaged, and for the other plate a PZT piezoelectric sheet of 14 mm diameter is isolated and debonded at the center position (15, 15) cm of the epoxy resin layer to represent a damage.

The experiment setup for damage localization in composite plate is shown in Fig. 7(c). An arbitrary signal generator 33250A produced by Agilent is used to excite Lamb wave signals. A 4-channel mixed signal oscilloscope DPO5034B produced by Tektronix is used to receive signals from the plate. All the PZT sensors used in the experiment are identical with a center frequency of 200 kHz.

Signals from 21 transmitter-receiver pairs are collected for the calculation of average phase velocity by the 2-D FFT as shown in Fig. 8, where the red circle represents the excitation sensor which is fixed, and the blue circle is the reception sensor which moves along -direction and -direction, respectively. 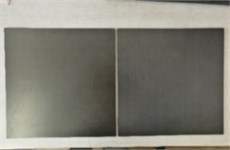 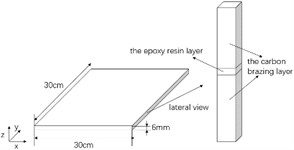 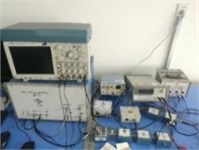 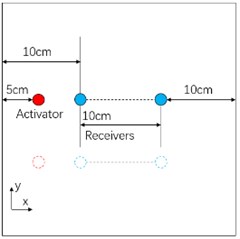 a) Along -axis direction 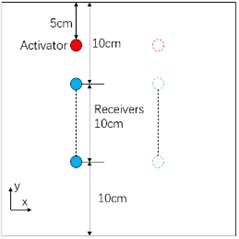 b) Along -axis direction 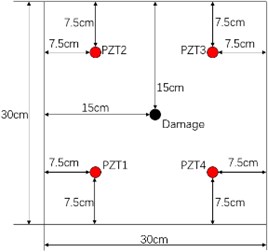 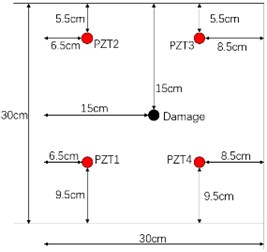 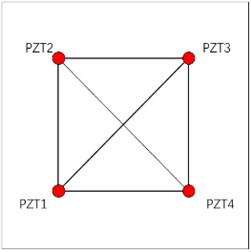 The two-dimensional Fourier transform of one group of signal is shown in Fig. 10(a). The phase velocity is calculated as 3585.6 m/s by averaging the nine sets of data. The frequency thickness product is 1.2 MHz∙mm. As shown in Fig. 10(b-d), from the dispersion curve, there are four modes whose velocities are near the average phase velocity (inside the black circle). The mode in 0° direction is A3. The modes in 45° direction are A2 and S2. The mode in 90° direction is A2. The mean change rate of the four modes is calculated as -3104.3. From Eq. (9), the corresponding group velocity is 1921.74 m/s. 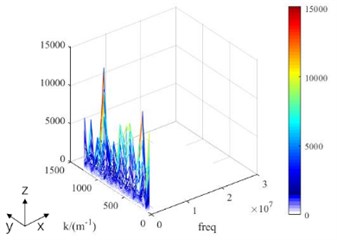 a) 2-D FFT for phase velocity

For damage localization, the excitation waveform is a 5-period sine wave modulated by a Hamming window, and the received signal from the non-damaged plate is used as a baseline signal. Fig. 11(a) shows received signals from the damaged plate and the non-damaged plate, respectively. The scattered signal is the subtraction between the above two received signals. Due to the anisotropy of the composite plate, the speeds in same directions are not exactly the same. From Fig. 9(c), it is seen that the directions of paths 1-2 and 3-4 in the non-damaged plate are the same, but the travel times at the peak amplitude of the two paths are different as shown in Fig. 11(b), which lead to a time difference . There are six paths in each sensor layout in Fig. 9(c), and paths in the same direction are considered as a pair. Among them, since the two diagonal lines make a 45° angle with the fiber direction, they can be regarded as a pair. The average time difference of the three pairs of paths is obtained. The time difference for sensor layout 1 is 22.22 μs, and the time difference for sensor layout 2 is 8.97 μs.

Fig. 11. Waveforms of received signals and calculation of time difference 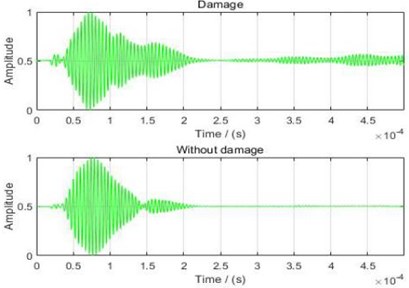 a) Waveforms from damaged and non-damaged plates 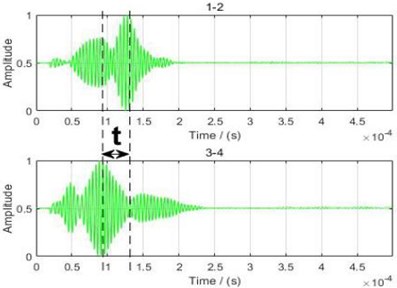 b) Time difference of two paths in same direction

The errors between the estimated damage position and the actual damage position (15, 15) cm are given in Table 4. The errors may be caused by the inaccuracy calculation of the group velocity of the mixed modes and the disturbance of the received signals. 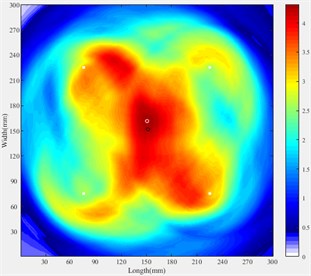 a) Imaging for Layout 1 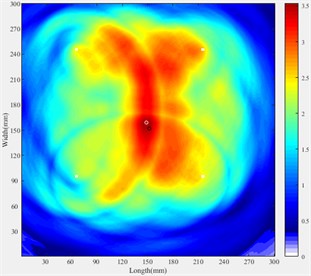 b) Imaging for Layout 2

This paper presents a method for damage localization on composite plate by an improved DAS algorithm using Lamb waves without mode speration. Phase velocity of Lamb waves in composite plates was determined by using two-dimensional Fourier transform. The dispersion curve is obtained from the finite element characteristic frequency method. The group velocity is calculated from several mixed modes in the dispersion curve. Damage position is estimated by the delay-and-sum imaging method with introducing an anisotropic time difference. The experimental results show that the method is effective for the localization of damage. A better imaging may be achieved by more sets of 2D Fourier transform signals and more accurate time difference calculation methods.

This work was supported by the National Natural Science Foundation of China with Grant Nos. 61671285.