Copyright © 2020 Ahmad Baniabedalruhman. This is an open access article distributed under the Creative Commons Attribution License, which permits unrestricted use, distribution, and reproduction in any medium, provided the original work is properly cited.

InterDyMFoam is a solver for calculating immiscible two-phase flow in an open source OpenFOAM software. The solver uses the volume-of-fluid method (VOF) for capturing the fluid-fluid interface. The solver is modified to work with the coupled VOF and level set (LS) method. In the proposed method, the VOF is used to capture the interface since it is a mass conserving and the LS is used to calculate the curvature and physical quantities near the interface. A bubble rising in column liquids is used to compare the solvers. The proposed method gives an accurate calculations for the physical properties in two phase flow problems and handles the topological change of the interface.

The study of two-phase flow is very important because their various industrial applications. Their applications includes spray, lubrication and food stuff processing. Capturing the interface in incompressible two-phase flow is a challenging problem in computational fluid dynamics. The most popular methods for capturing the interface are the level set and volume-of-fluid. In the level set method [1], the signed distance function is used to describe the interface, where the value of is negative in the continuous phase, positive in the disperse phase and zero at the interface. Moreover, the level set function is smooth, giving an accurate curvature . The VOF [2] uses the volume fraction function instead of the level set function. The volume fraction takes the value of one in the dispersed phase and zero in the continuous phase. In addition, is between zero and one in the cells that contain the interface. The VOF has a challenge in calculating the curvature because the volume fraction function is discontinuous. On the other hand, the VOF is a mass conserving which is not the case in the level set method. In order to get an accurate calculation of the two-phase flow, a coupled VOF and LS method is used. In other words, the mass conservation in the VOF is combined with calculating and other physical properties using the LS method. The interDyMFoam solver in OpenFOAM for 3D is modified to work with 2D planar and axisymmetric flows [3, 4]. The interDyMFoam for 2D is achieved to use the coupled VOF and LS method instead of using the VOF method only.

The solver interDyMFoam solves a two-phase flow problem for velocity , pressure and interface location. The continuity, momentum, and volume fraction equations are respectively given by:

In the VOF, the density and viscosity are respectively calculated as and where the subscript represents the fluid phase. In the coupled VOF and LS method, only Eq. (3) is solved to find the volume fraction function. In addition, the LS function is initialized from the VOF function as, , where is the mesh cell size. Note that the initial value is positive in the disperse phase and negative in the continuous phase. The next step is to solve the re-initialization equation to assign the LS function to a signed distance function:

where is the artificial time. The LS function at the beginning of the iterations is

Also, the density and viscosity are calculated using the LS function as, and , where is the Heaviside function and defined as:

The above equations are solved using the finite volume method (FVM). In FVM the computational domain is divided into a finite number of control volumes. Then, the equations are integrated over a control volume to get integral form of the equations. The integral equations are discretized using different methods to get the linear system of algebraic equations. In OpenFOAM, the dynamic mesh refinement works only for hexahedral cells. The boundary conditions for the LS equation are zeroGradient Which means that the derivative normal to the boundary is zero. For the other equations, there are several boundary conditions as zeroGradient and fixed value. For more details see [5]. 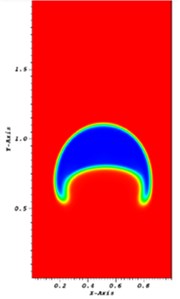 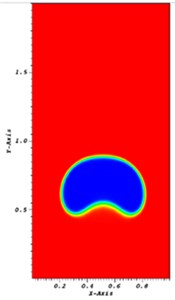 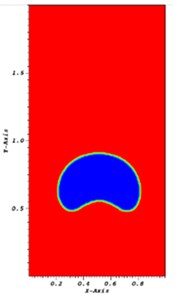 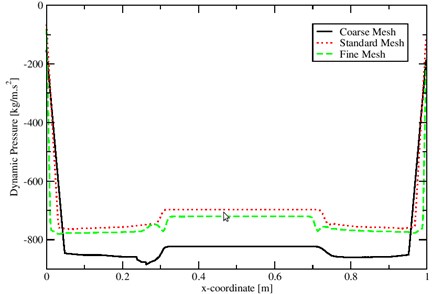 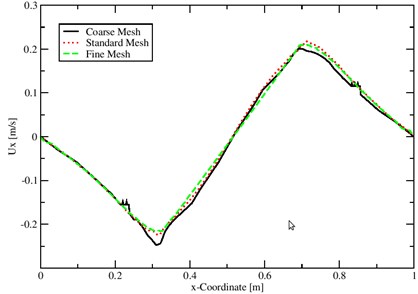 The interDyMFoam solver is modified to allow of using VOF and LS methods. The VOF is a mass conserving and the LS function is continuous to calculate the curvature. The modified solver is tested on the bubble rising in a liquid column. Moreover, the two solvers are compared on the same case test. The modified solver gives a sharper interface while the original solver smears the interface. Also, the convergence is obtained by comparing the pressure and velocity on three different meshes.

Author thankful to the Deanship of Scientific Research and Graduate Studies, College of Science at Yarmouk University for funding to present this work.