Copyright © 2020 Ersin Toptas, et al. This is an open access article distributed under the Creative Commons Attribution License, which permits unrestricted use, distribution, and reproduction in any medium, provided the original work is properly cited.

Wind energy is one of the alternative energy sources that respond positively to both global warming and energy needs, due to the increasing population density and the adverse effects it has brought in recent years. In this study, modification on current design of wind turbines has been demonstrated in order to increase the energy yield obtained from renewable wind energy sources. With the investigation of Turkey’s wind map, a hybrid wind turbine design was carried out. This hybrid design incorporates Savonius and Darrieus type turbines which are used heavily in the literature. The hybrid design was developed to increase the performances of the vertical axis turbines from wind turbine types and to widen their usage areas. The comparison of the hybrid design with the conventional wind turbines were carried out by comparing their performance indexes such as efficiency, torque, and tip-speed ratio. 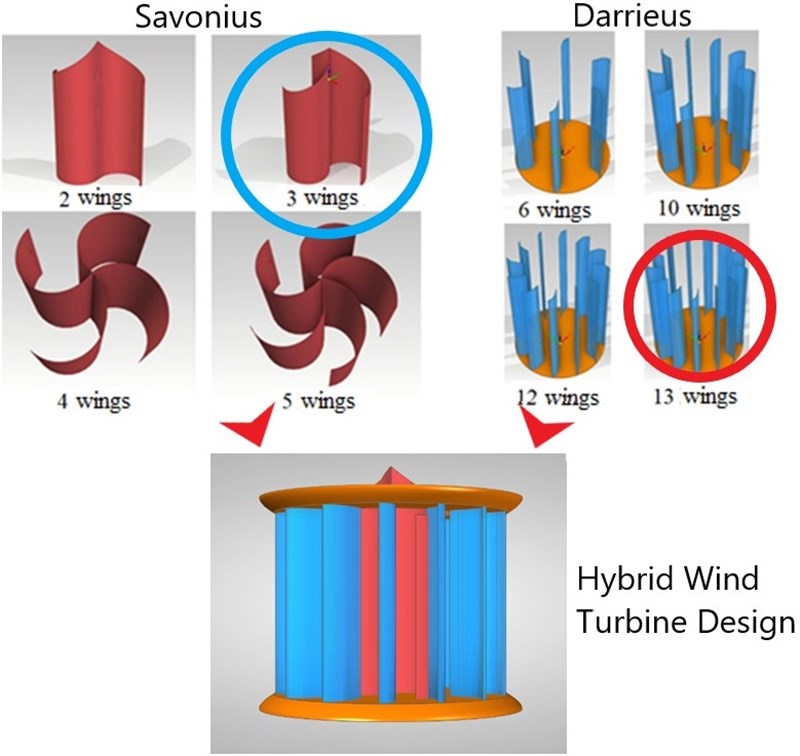 Energy is one of the most important needs that humanity has needed since its existence. In order to meet this energy demand, wind energy is one of the renewable energy solutions that decreases tackles the climate change phenomena. New designs are made to increase the performance of wind turbines and more energy recovery is tried to be achieved [1, 2]. Wind turbines are divided into two groups, namely vertical and horizontal wind turbines. In investigating the efficiency of wind turbines, physical qualities such as Betz law, tip speed ratio, blade profile are used [2-4]. In Fig. 1, the relationships between the ratio of blade tip speed to wind speed () and power coefficient () for different wind turbine types are given.

It is common to use vertical axis wind turbines in electrical energy production since their power coefficients are high. Different types of vertical wind turbines such as Savonius, Lafond, Darrieus and helical wind turbine are used and studied in the literature [1, 6]. In a study on Savonius turbines, fixed wind focusers were used to increase its performance by focusing the wind. As a result of flow analysis, it was found that 6 guiding plates gave the best value [3]. In a study on Darrieus wind turbines, the effects of different blade types on performance were investigated by changing the angle of attack [7, 8]. Then the effect of proximity of the wind blades on the performance was studied by changing the ratio of chord length-rotor diameter of a three-bladed vertical axis turbine. Power coefficients of a NACA 0018 airfoil with 0.3, 0.6, 0.8 and 1.2 chord length-rotor diameter ratio were calculated. According to the results, the highest power coefficient value was 0.56 and it was with 0.8 chord length-rotor diameter ratio and 2.25 blade tip speed to wind ratio. The chord length-rotor diameter ratio, which performed well in the widest range, was found to be 0.3. 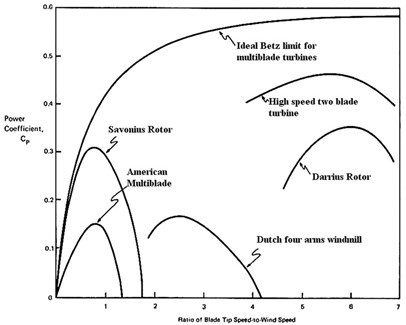 In this study, a hybrid vertical wind turbine design that incorporates Savonius and Darrieus wind turbines has been introduced to increase performance. Performance indexes such as efficiency, torque, blade tip speed to wind speed ratio were compared with other turbines.

The hybrid design has been created by combining these two different wind turbines with 66 % Savonius and 34 % Darrieus turbine types. If the ratio of Savonius turbine increases, the efficiency will increase at relatively low speed values and decrease at high speed values. However, if the ratio of Darrieus increase, the efficiency rate will increase at high speed values and decrease at low speed values. In addition to the ratio between wind turbine types, the choice of blade profile to be used in these wind turbines is one of the main factors that determine the characteristics of the hybrid design. In this study, blackbird type blade profile has been chosen as turbine blades because it has a high camber value and low maximum thickness, reaching the highest lifting force at an angle of attack of 0° and also contributing to the Savonius turbine by directing the wind at low wind speeds [12, 13]. Fig. 3 shows the Blackbird blade profile selected for turbine blades in this study. 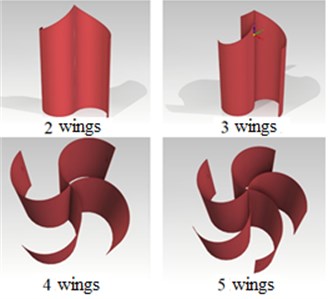 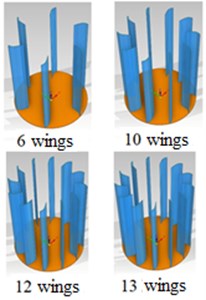 Wind focuser is the part that increases the power generation from the turbines by gathering the air flow to a narrower area and increasing the wind speed and pressure. In this study, it is aimed to increase the power of the turbine by adding wind focusers to the floor and ceiling of the turbine between the orange colored structures seen above and below the turbine as seen in Fig. 4. 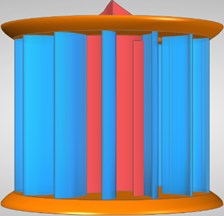 Modules of two different programs have been used for analysis of hybrid wind turbine design. Models used in this study were ANSYS CFX and Solidworks Flow Simulation. Solidworks Flow Simulation was used for determining optimal number of turbine blades whereas calculation of parameters such as turbine efficiency and blade profile were realized through ANSYS CFX. Initial analyses were carried out for each parameter for wind speed of 5 m/s. Afterwards, in order to find the most efficient structure, ten different analyses were carried out by running the simulation with different wind speeds from 1 m/s to 10 m/s in intervals of 1 m/s.

In this study, air was selected as the fluid in the analysis programs, and both laminar and turbulent flow types were chosen. The main performance parameter calculated in the analysis of Savonius and Darrieus blades is the pressure difference created by the wind on the turbine. Pressure difference was calculated for Savonius wind turbines with 2, 3, 4 and 5 blades and for Darrieus wind turbines with 6, 10, 12 and 13 blades. The speed of the wind was given as 5 m/s. Following the simulations, pressure graph was created according to the turbine angle. Parameters used in simulation using Solidworks Flow Simulation is shown in Fig. 5.

After determining the number of blades for both Savonius and Darrieus wind turbines in Solidworks, hybrid wind turbine design was analysed in ANSYS with calculation of torque generated with the turbine and creation of PowerN function that calculates the power output according to moment. The model preparation, parameters and rotor power outputs in ANSYS CFX is given in Fig. 6.

a) Preparation of the model in ANSYS CFX 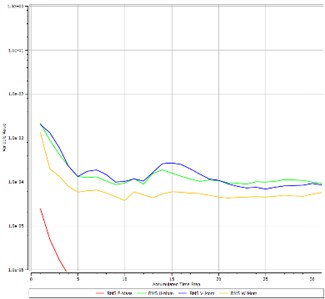 b) CFX solution and parameters 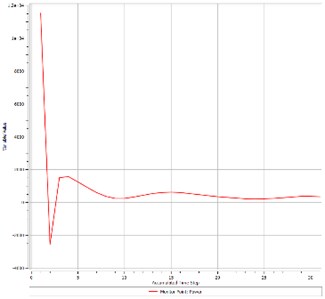 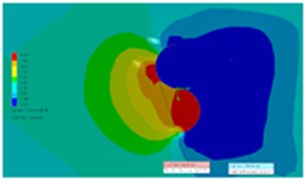 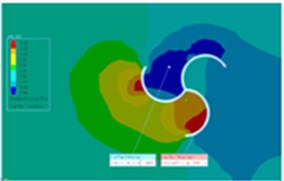 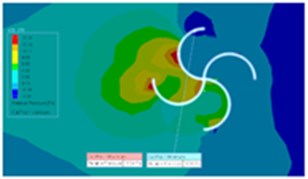 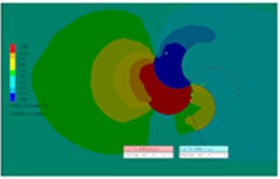 Fig. 8. Pressure differences arising on the Savonius turbine with 5 m/s side wind

As a result of flow analysis on Savonius blades, it has been observed that the use of three blades is more efficient than standard two blades. This result is also supported by the findings of Aymane [13]. In line with these results, three number of blades was chosen as the Savonius part of the hybrid wind turbine design in this study since the production cost and complication was lower and the performance graph was higher. 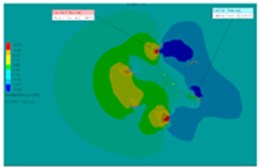 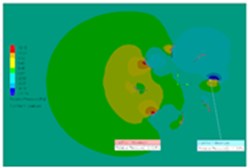 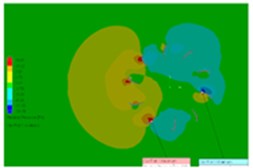 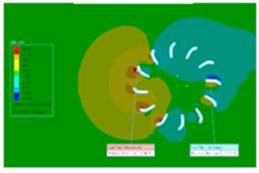 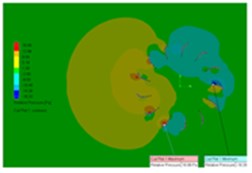 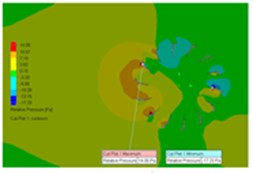 Fig. 10. Pressure difference graph based on the number of blades for Darrieus turbine 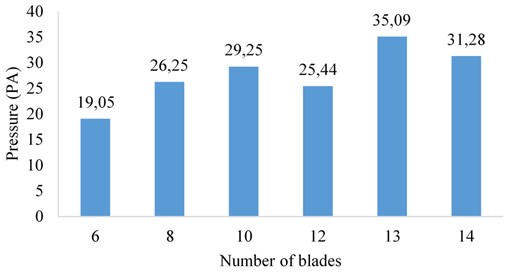 The results show that thirteen number of blades gives the highest-pressure difference in Darrieus wind turbine. Similar to these results, Vortexis brand wind turbines on the market support this assertion because they are also designed with thirteen blades [14]. The number of blades were not increased further because addition of blades to the design causes increase in cost and complication in manufacturing. Therefore, thirteen blades were chosen as the Darrieus part of the hybrid wind turbine design in this study.

After determining the number of blades for both Savonius and Darrieus wind turbines, a hybrid wind turbine which has three blade Savonius turbine inside and thirteen blade Darrieus turbine outside was analyzed in ANSYS CFX with 8 m/s wind speed. Power output versus angle of the turbine of the hybrid wind design is given in Fig. 11.

Analysis showed that the designed hybrid wind turbine produced by an average of 270 Watts with 8 m/s. The generated power is calculated with Eq. (1). In calculating the efficiency of a turbine , the density ( ) of the air , the speed of the wind (), the power coefficient (), which is the ratio of the turbine propeller to the shaft power, and the rotor sweep area () formed by the full turn of a blade are used. The efficiency of the designed hybrid wind turbine was calculated as 38.79 %:

Fig. 13. The placement of the hybrid turbine design in efficiency graph