Research on track clustering algorithm based on historical radar data

Copyright © 2020 Afang Mao, et al. This is an open access article distributed under the Creative Commons Attribution License, which permits unrestricted use, distribution, and reproduction in any medium, provided the original work is properly cited.

With the advent of the big data era of air traffic control systems, the application of trajectory clustering in the field of air traffic has received widespread attention. This article reviews the trajectory clustering methods proposed in domestic and foreign literature. According to the different similarity measures and clustering evaluation criteria, the application of different clustering methods in trajectory clustering is introduced from several aspects, and the advantages and applicable scenarios of each algorithm are summarized. Then, based on the real flight history radar data information, the performance of the two different clustering algorithms in track clustering is analyzed. It mainly includes two aspects: First, in the data preprocessing part, data cleaning, filtering, and interpolation are performed. After processing, the data is resampled to obtain research data. Then, according to the characteristics of the track data, the two hyperparameters of the DBSCAN algorithm and the value of the K-means algorithm are determined, and the clustering results are visually displayed in combination with the real flight data from the Capital International Airport to Shanghai Hongqiao International Airport. 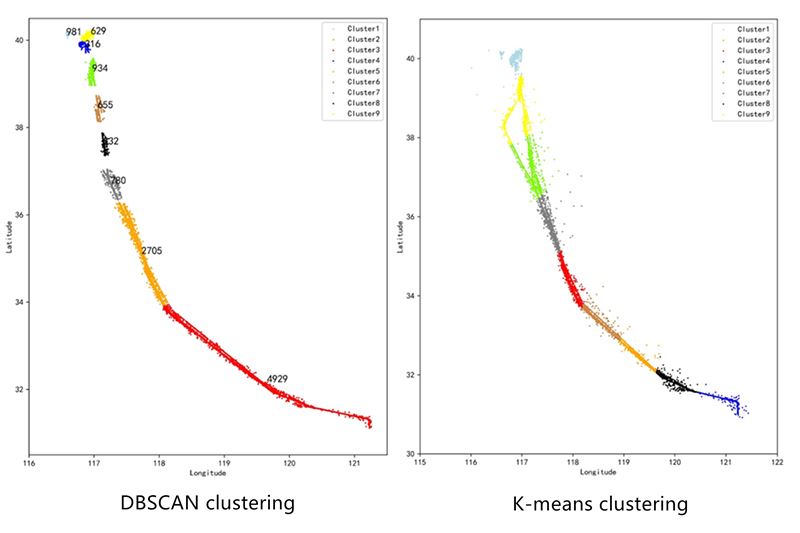 With the rapid economic development, the civil aviation industry is also developing rapidly. As of 2019, the entire industry has completed a total transportation turnover of 129.325 billion ton-kilometers, an increase of 7.2 % over the previous year. Among them, the total turnover of domestic routes completed was 82.951 billion ton-km, an increase of 7.5 % over the previous year [1]. The relevant characterization data of each link of civil aviation transportation shows the characteristics of massive and multi-source. According to a study by the Federal Aviation Administration, a single jet engine can generate the equivalent of 20 terabytes of data in a year. Huge data resources have become the core resources for industry development, and how to make good use of data resources will determine the future development of the industry [2]. Using data mining methods to turn these data into a source of knowledge for exploration is the focus and difficulty of the entire industry. As a very important data analysis method in the field of data mining, cluster analysis is used by more and more researchers in the process of trajectory data mining. The goal of trajectory clustering is to find those aircraft trajectories with the same motion pattern. Through the analysis of the internal motion patterns and characteristic information of the tracks, the similarity between the tracks is determined, and then the tracks with higher similarity are classified into one category. Comprehensive control operation data such as trajectory data, flight plan data, voice data, etc., through the mining and analysis of massive operation data, it is possible to realize uninterrupted real-time performance of safety-related indicators such as air traffic flow situation, control operation safety, and workload Monitoring and evaluation. This will help industry personnel understand the characteristics of traffic flow in the airspace, assess the traffic potential of the route, and is of great significance to alleviating the pressure of air traffic congestion and ensuring the safe and efficient operation of aircraft.

2.1. Clustering based on partition

The grid-based clustering algorithm divides a data sample space into finite grid structures, and then performs clustering operations on these grid structures. Common grid-based algorithms include STING (Statistical Information Grid-based Method) algorithm and Wave Cluter algorithm. Kenneth et al. [21] took the busy area of the airport as the research object and proposed a new grid-based clustering method. This type of algorithm performs cluster analysis and research on the track data corresponding to different airports, so as to obtain the center track clustering results of the arrival and departure routes to each airport. The unique advantage of this type of algorithm is its faster processing speed, because the algorithm processing time is only related to the number of grids, not the number of data.

A model-based algorithm is a fitting method that combines a given data set with a certain mathematical model to form an optimal method and automatically determine the number of clusters according to standard statistical methods. Common model-based algorithms include statistical methods and neural network methods. In 2015, Eerland W. J. [22] selected the Gaussian equation to model uncertainty based on historical data statistics. The method he proposed could choose to filter the track. At the same time, a group of representative trajectories could be automatically generated and several important trajectories could be selected from these representative trajectories.

3. Track clustering based on radar data

3.1. Data preprocessing based on clustering

The data used in this article comes from the secondary radar monitoring system. Each flight number corresponds to a piece of track information, usually including multi-dimensional characteristic parameters such as timestamp, flight number, landing and landing airport, latitude and longitude, altitude, speed and so on. The recording interval of each track point is 8 seconds, which determines that each track is composed of a series of discrete track points. The number of track points included in different tracks is also different. Table 1 shows Partial track point information of a flight sorted by time.

The aircraft trajectory can be expressed in the form of the following collection:

where is the aircraft trajectory set, is the trajectory number, is the total number of trajectories, the flight trajectory of a flight , which is composed of a series of multi-dimensional radar points ordered by time:

where is the -th multi-dimensional radar point in the -th trajectory, is the radar point number, is the number of radar points, and the information contained in each radar point is represented by a vector:

Eq. (3) represents the five characteristic parameters of time, longitude, latitude, altitude and speed of the -th multi-dimensional trajectory point in the -th trajectory.

The original radar data contains a lot of dirty data, as well as some attribute data that is not useful for research work, so it is very necessary to preprocess the data to improve the quality of the data. First, according to the flight call sign and time stamp, the radar data is fused with the flight plan data of the same period. Flight plan data is used to supplement radar data. Screen the fused data, classify and mark according to flight call signs, time stamps, and airports, and obtain the trajectory sequence of each flight for a specific city. Filter the data set according to the recording time range, record length, etc. to remove obvious erroneous data and incomplete data to ensure the validity of the data. Table 2 shows some trajectory data after fusion.

Table 2. Some data fragments after fusion

The radar system will have missing track points during the work process. Taking the data used in this article as an example, the data is updated once with a time granularity of 8 seconds. the missing data ranges from 20 seconds to 20 minutes. In order to solve this problem, this paper uses a linear interpolation function to interpolate according to the established time granularity. In order to make the trajectory set more suitable for clustering, all the trajectories after interpolation processing are resampled into equal-length sequences, so that each trajectory contains the same number of radar points. the data preprocessing process is shown in Fig 1. the data after data preprocessing can be used for the study of track clustering.

K-Means is a typical partition clustering algorithm, where indicates that the cluster is clusters, Means represents taking the average of the data values in each cluster as the center of the cluster, or called the centroid. That is to describe the cluster with the centroid of each class. K-means basic algorithm flow:

1) Randomly select sample points from the sample as the initial mean vector .

2) Cycle through the following steps until the stop condition is reached.

The DBSCAN algorithm is a density-based data clustering method. the core idea is to start from a certain core point and continue to expand to the area where the density is reachable, so as to obtain a maximized area including the core point and the boundary point. the density of any two points in the area is connected, and one of the clusters can be uniquely determined by any core object in the area.

The basic algorithm flow of DBSCAN:

Input: Sample data set , scan radius , the minimum number of neighbor points MinPts where the given point becomes the core object in the neighborhood of .

(3) The neighborhood of all core objects is traversed

This article selects the flight that took off from Capital Airport in October 2018 to land at Shanghai Hongqiao Airport. the straight-line distance is about 1076.91 kilometers. After data cleaning, interpolation processing and data resampling, the data set used in the study contains 992 tracks. a total of 694,400 track points. the trajectory of some flights from Beijing to Shanghai is shown in Fig. 2. 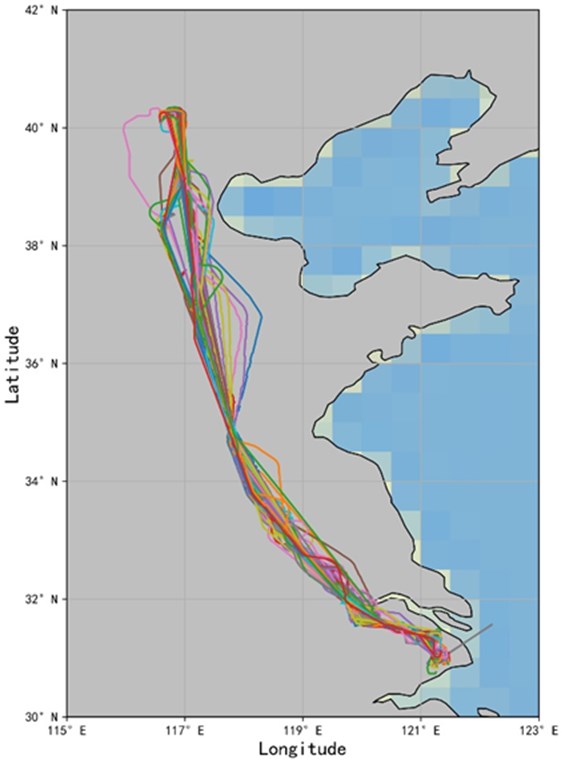 The DBSCAN algorithm mainly determines the two hyperparameter scanning radii and the minimum neighbor points MinPts of the core object. for the selection of the scanning radius and MinPts, this paper firstly fitted and calculated the parameters of each parameter combination, and used the model evaluation score calculated by the combination to be the contour coefficient and the noise ratio. at the same time, the larger the reference score, the better, and the smaller the noise ratio. the better the principle, it is estimated that the value of is between 4.5-7, and the value of MinPts is between 60-90. Based on this and according to the actual clustering graphics, this paper chooses the parameter combination of 6 and MinPts = 80. at this time, the noise data accounts for 9.55 % of the entire data set, and the contour coefficient is 0.454.

By comparison, it is found that the DBSCAN algorithm clusters according to the set scan radius and the minimum number of neighborhood points MinPts, and eliminates the noise data. As shown in Fig. 4, the trajectories are divided into 9 categories. from Beijing Capital Airport to the cruise stage, the track points are relatively scattered, and the track points are relatively dense during the cruise to landing at Shanghai Hongqiao Airport, which better reflects the different areas. Route distribution characteristics and flight operation status. When K-means clusters all trajectories into 9 categories, as shown in Fig. 3, it is a simple division of the data set based on the prototype-based concept of clusters, which is equivalent to a statistical clustering method and retains outliers data. Comparing the two algorithms, the DBSCAN algorithm can automatically identify noisy data and outliers, and can eliminate them, which can lay the foundation for subsequent work. However, the DBSCAN algorithm is more sensitive to two hyperparameters and has a greater impact on the judgment of noise data. The K-means algorithm is simple to run and needs to rely on pre-processing to improve clustering performance. 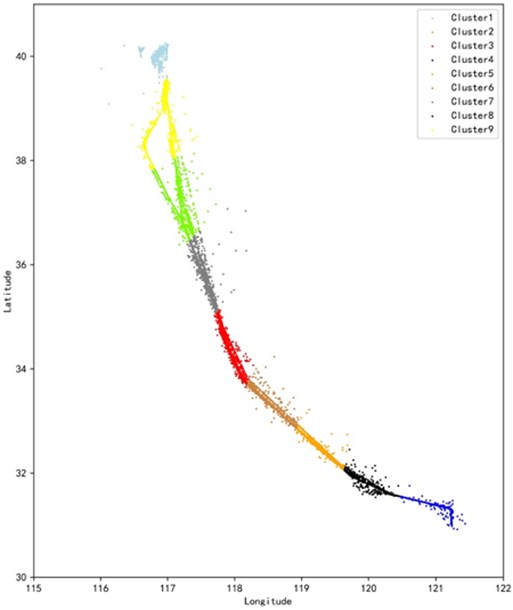 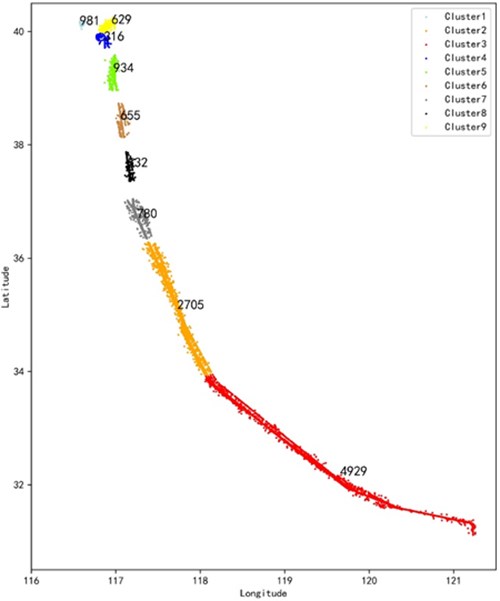